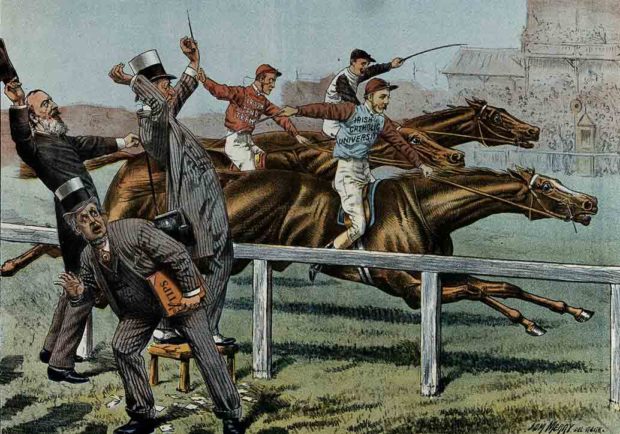 Earlier in the week I laid out my case for why both US stocks and US government bonds are likely to be poor investments. Both look over priced. If you own each in equal measure the net result is likely to be poor under just about any scenario. A reader wrote in with another suggestion that’s supposed to benefit if inflation rises. I remain sceptical.

See “Dammit, Janet, I love you” for my take on likely outcomes for US stocks and government bonds. This spurred a reader called Henry to send in a question. Here’s what he had to say:

Enjoyed the bit about US stocks/bonds. But have a question. If standard treasurys aren’t worth it, and inflation is rising, is it worth buying TIPS?

Thanks Henry. I encourage all readers to send in comments and questions (robmarstrand@ofwealth.com). It helps me to know what you’re thinking, and what to focus on. I promise to read every email, even if I can’t answer all of them.

Henry’s question is a good one. Normal US treasury bonds don’t offer great prospects due to their pathetic yields – although they’re better than the US$7 trillion odd of European and Japanese government bonds with a negative yield (which is insane). But is there another type of US government bond that’s worth owning?

A normal US treasury bond is what is know as a fixed coupon bond. If it’s issued at a price of US$100 with a 2% yield it pays $2 of interest each year, until it matures and the $100 is paid back.

Whatever the bond price changes to in the markets, that $2 annual interest stays the same: it’s fixed. So if the bond price rises then the yield falls, and vice versa.

But there’s another type of treasuries that have a very different payout. These are “TIPS”, or Treasury Inflation Protected Securities to give them their full title.

The result is that investors in TIPS get a return equivalent to official inflation (CPI) plus something extra. That something extra is known as the “real yield”, meaning it’s the yield on top of the rate of inflation.

Sounds like a pretty good deal, right? Whatever happens to inflation, if you own TIPS you’ll earn a bit more on top.

There’s some other stuff to be aware of, especially right now.

But hold on. There’s some other stuff to be aware of, especially right now.

First is to remind you that official inflation is probably understated, due to various statistical fiddles. I reckon you should add at least 1%, and perhaps as much as 2% a year to the reported inflation rate to get to the kinds of price rises that people actually experience in the real world. This means the genuine real yield on TIPS is less than reported.

Second you could be paying taxes on that income. Depending on the rate you pay, if it’s high enough it could leave you still making a negative net real return (after inflation).

In other words, official CPI plus the TIPS real yield, less income tax on the total – which is the net TIPS return in a year – could be less than actual, real world inflation. The TIPS investor could be making something, but not enough to beat genuine inflation once taxes have been paid.

To stop that happening TIPS need to have a sufficiently high real yield – the amount added on top of official CPI. But in current overpriced markets there’s bad news here. TIPS have very low real yields at the moment. 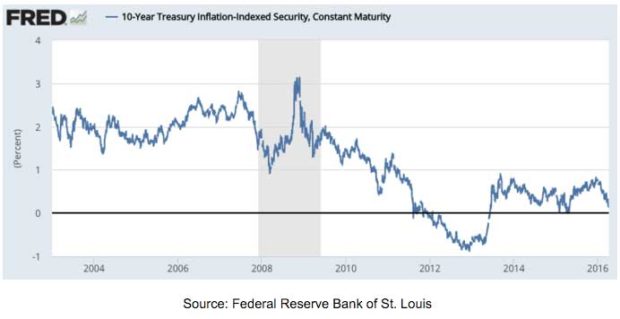 That was a reasonable return. But then things went awry. TIPS real yields went negative during 2012 and much of 2013, meaning TIPS investors were getting less than CPI. The real yield then went modestly positive for a while, although nowhere near the levels before 2008.

Even more incredibly, 5 year TIPS are so well bid that they have a negative real yield (again), of -0.41%. In other words, with US CPI running at around 1%, a buyer of US TIPS makes less than 0.6% gross.

My take on this is that TIPS are overpriced, just like the stock market and the rest of the bond market in the US. If investors one day demand a sensible real yield again – somewhere around 2% on top of CPI – then the prices of TIPS will plunge.

Of course there’s some evidence that inflationary pressures are already rising in the US (again, see my last article for more). So in theory TIPS offer better protection than normal fixed income treasury bonds.

We can dig into this further with a look at what’s called the break-even rate of inflation. A normal five year treasury bond yields 1.17%. Five year TIPS have a real yield of -0.41%. If I deduct the latter from the former I get the break-even rate, which is 1.58% (two minuses make a plus).

This says that markets are currently predicting that CPI will average 1.58% over the next five years. If it’s less, then normal treasuries will beat TIPS. If it’s more, then TIPS will beat normal treasuries. If CPI expectations change in bond markets – up or down – then the difference between the yields will change to reflect that.

Is it likely that CPI will average 1.58% over five years? Well it’s certainly possible, although I suspect it will be higher: more in line with the 2.6% average of the past 30 years.

If my hunch is right, you could argue that it’s worth buying TIPS. But if TIPS real yields rise back to more normal levels around 2% – which is to say there would be downwards pressure on TIPS prices – that would offset any gain from higher than expected CPI.

So I doubt that TIPS are worth the risk. That said, if I had no choice but buying US treasury bonds of some kind, and holding them for five years or longer, I’d choose TIPS over their fixed income cousins.

Even if it’s possible for inflation to be well under 2% over a five year time frame, things get bizarre when we look further out into the future that’s currently projected by the US bond markets.

Thirty year treasuries yield 2.55% (too low for a decent return). Thirty year TIPS have a real yield of just 0.78% (again too low). This means the 30 year break-even inflation rate is 1.79%. This is what bond markets are currently predicting that inflation will average out at over the next generation.

I’d expect inflation to end up well above current expectations at some point. If that happens then interest rates will have to rise, and bond market carnage will ensue as yields rise and prices fall.

Of course I could be wrong in all this. Maybe inflation will be permanently below 2% for the next three decades and beyond. Perhaps we’re on the cusp of another huge depression, and regular fixed coupon treasuries will turn out to be great investments as yields fall even further and prices rise.

But I doubt it. There will be so much helicopter money flying around by then, as Janet Yellen and other central bankers go into overdrive. After all, they’ll do practically anything to prevent deflation.

As for TIPS, they look like poor value, with real yields so low (or even negative on short maturities).

My recommendation remains the same: avoid US stocks and treasury bonds, including TIPS. Look for value in stock markets outside the US instead. Buy gold as well.