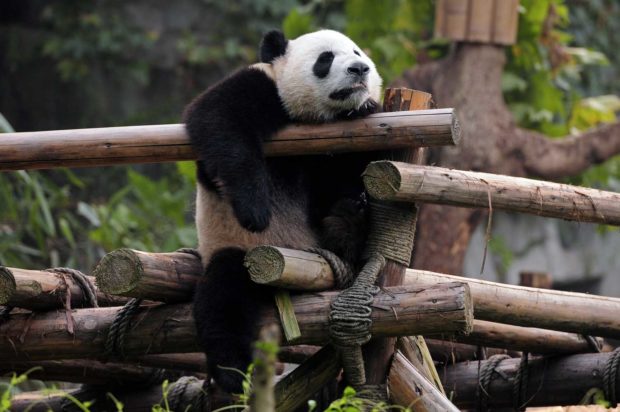 At times we are our own worst enemies, and the field of investing is no exception. Our psychological biases can drive us to unconstructive, or even destructive, behaviour. So it’s important to make a conscious effort to keep ourselves in check. One important way is to constantly challenge our preconceptions. Today I’ll challenge mine with a guest article about China.

Many believe that, in recent years, US politics has been more polarised than ever before. Republicans are more resolutely residing in their Republican bunkers. Democrats have dug ever deeper Democrat trenches.

Dialogue is left stranded in no-man’s land. It’s deadlock in a war of attrition.

Whether or not that’s true, it’s certainly the case that we all tend to be drawn to people or viewpoints that we already agree with. It’s a natural bias. It’s a basic question of personal taste.

There’s even a name for it: confirmation bias. This is defined as “the tendency to interpret new evidence as confirmation of one’s existing beliefs or theories”.

Confirmation bias is a constant danger in the investing world. Bulls tend to stay bullish, and bears tend to stay bearish, whatever the market is doing.

Confirmation bias is a constant danger in the investing world. Bulls tend to stay bullish, and bears tend to stay bearish, whatever the market is doing.

Overcoming this bias is hard. But at least knowing that it exists is a good starting point. Then you can actively try to challenge yourself, by seeking out counterpoints and contrary opinions.

In this spirit, today I’ll share with you a recent article about China written by Eric Fry, of the Non-Dollar Report. Eric has a long track record as an independent analyst, commentator and successful investor.

I’ve heard so many theories over the past 15 years or so about how China is about to blow up (economically speaking) that it’s hard to take any of them too seriously.

The country has just continued its long speed march to affluence, even if its legs are a little more tired today than when it set off. In the meantime, every few months, Western traders swing from believing that China is practically faultless to it being completely doomed.

So I take a sanguine kind of stance: China has problems, as it always had, but it’s good at muddling through them. Growth will slow, but it will still grow. (For some examples of my China analysis, see here, here, here and here.)

Anyway, as you’ll see, Eric takes a more resolutely negative stance on China. He challenges some of my views.

It’s good to accept a challenge now and then. It makes us better investors. Enjoy.

Is China sick? By Eric Fry For The Non-Dollar Report

There are facts… and then there are official government facts. Rarely do the two reside in the same neighborhood. In fact, they often have nothing to do with one another.

For proof of this tendency, consider some of the recent economic data coming out of China. According to the government’s official economic reports, the country’s GDP expanded at a 6.7% annual rate during the first three months of this year. This strong GDP figure suggests the Chinese economy is still producing fairly robust growth.

These dismal data points from the private sector are not the only worrisome trends in China. Corporate debt levels are skyrocketing. New credit topped $1 trillion in the first quarter. 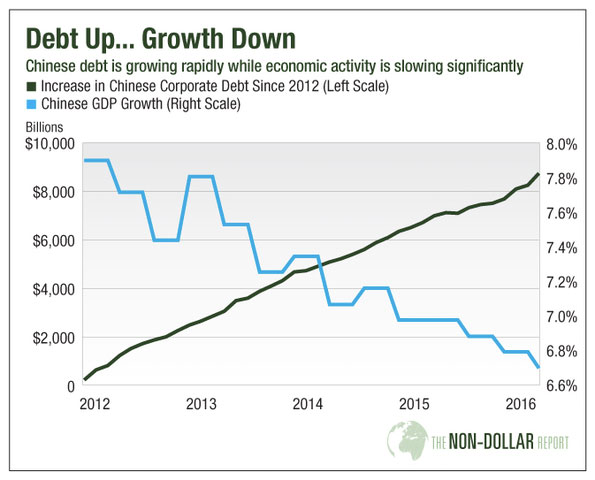 Obviously, soaring debt and slumping economic growth is not an ideal economic recipe. Perhaps that’s why the Shanghai Composite Index is failing to rally along with most of the world’s stock markets and why the Chinese currency continues to languish near its lows against most currencies of the world.

The Chinese economy is still swooning… which means it is still a good idea to steer clear of Chinese stocks.

For The Non-Dollar Report