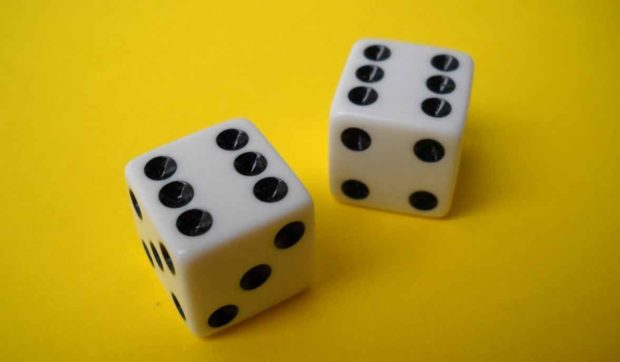 It’s an obvious truism that investors want to maximise their profits. However, what’s barely understood is that improving annual returns from a low level to a bit less low has a much bigger effect on long term outcomes than going from high to a bit higher. Since we’re in an ultra low yield world, this effect is a big deal. Fortunately, investors can take steps to radically improve long term results.

The investment world is curved. Most investors are aware of the concept of profit compounding, but today I’ll explain a consequence of compounding that’s understood by very few people. It’s more important than ever in these low yield times.

Central to the idea of compounding is that small changes to average annual profits make big differences to long term investor outcomes. A linked idea is that of doubling times. These are simply the number of years it takes for an investment to double in size at a given rate of return.

(I recommend that you read “Make mine a double” if you’d like to refresh your memory about compounding and doubling times. It includes a very easy way to roughly calculate latter, the “rule of 70”.)

Today I’ll focus on a specific property of doubling times. First off, here’s a chart which shows the relationship between rates of return and doubling times. 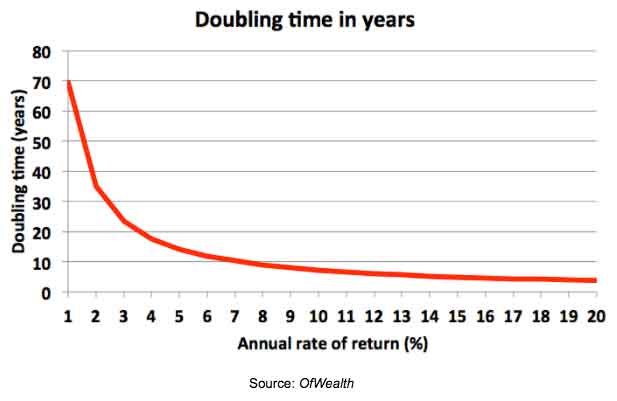 As returns increase, the time that an investment takes to double reduces. But it doesn’t fall in a straight line. Instead, it’s curved.

(Note: I’m using precise calculations here, which require something called logarithms. But if you use the rule of 70 to estimate the doubling time you’ll find the results are very similar. For example, at 3% you would divide 70 by 3 to give 23.33 years doubling time. Pretty close.)

Here is the first crucial point. The further you get out to the right, where rates of return are higher, the lower the effect on doubling time of each incremental increase in the return.

Real returns and real doubling times are what really matter

Of course, what matters with investment is how much the net return – after investment costs and taxes – beats increases in the cost of living. It’s the net real (after-inflation) return that counts.

Put another way, you want each dollar’s worth of your current investments to multiply faster than they lose purchasing power, once the government and financial industry have had their cut. Which means that doubling times are more meaningful when calculated using real rates of return (net of inflation) than nominal ones (before deducting inflation).

If something earns a nominal return of 10% a year it will double in 7.27 years. With inflation at 3% a year, the real return will be 7%. The doubling time, in real terms, would then be 10.24 years. But if inflation is 6% a year then the real return is reduced to 4% a year. In this case, the time to double the purchasing power goes up to 17.67 years.

Imagine a world where real returns of 8% are commonplace. That means real doubling times would be just 9.01 years.

As I’ve explained before, a rule of thumb for retirement funds is that when you retire you’ll need roughly $20 of funds for every $1 of money you’ll need to withdraw in the first year of retirement (see here for more).

If their current funds are $400,000 then they’ll have to double them, in real terms, over the next decade. To achieve that requires a real return of 7.18% a year.

That’s easily achieved in our imaginary world where 8% real returns are commonplace. Or even in the not so distant past. The real (above inflation) return on the S&P 500 index of US stocks was 8.8% a year between 1980 and 2005 (and 12.7% a year including inflation).

The implications in a low yield world

Sadly, the world we presently live in is very different. Most stocks, bonds and a lot of real estate are priced expensively. Yields are ultra low. Inflation is relatively subdued, but still exists. Future real returns, for most mainstream assets, are likely to be extremely low.

In the ultra long run, since 1871, US stocks have delivered a real return of about 6% a year. I see no reasons why listed companies in the US are likely to perform, on average, even better in future than they have done over the past 146 years. Let’s assume that – perhaps generously – these companies achieve similar growth in future, and the companies distribute the same share of profits to shareholders as in the past.

In the past the average cyclically adjusted P/E ratio (CAPE) of US stocks was 16. Today the ratio is 30, meaning US stocks are expensive.

Given the way that real returns are split between real business growth and distributions to shareholders, and assuming no change to valuation multiples, the real return falls to 3.7% a year. I’ve also thrown in an example of how things would look if the CAPE was 10, which increases the real return to 9% a year. 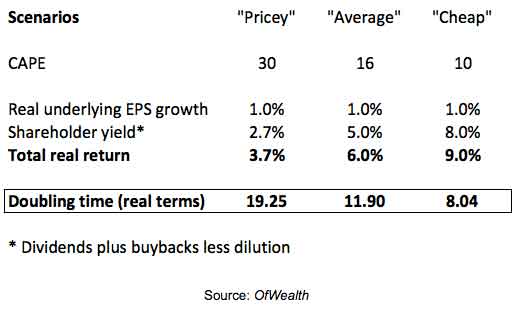 The conclusion should be clear. Buying a stock index like the S&P 500 isn’t a particularly attractive prospect for the hard pressed investor, given currently high valuations. That’s especially true for those with retirement looming and much ground to make up.

Real doubling times have been stretched out to much longer than average. It’s even worse in the world of bonds, where future real yields are likely to be pathetic, or even negative.

Remember: small changes to low returns have a huge effect on doubling times. So any improvement that can be achieved is likely to be a big deal in this low yield world.

All investors can make sure they do what they can to keep investment costs and taxes to a minimum (legally, of course). Shop around for brokers and fund managers, and use any tax breaks on offer where you live.

But even more important is to find the best investments in the first place. Reasonably priced or downright cheap stocks are one of the best places to start, combined with time and patience. (For some suggestions, click here.)