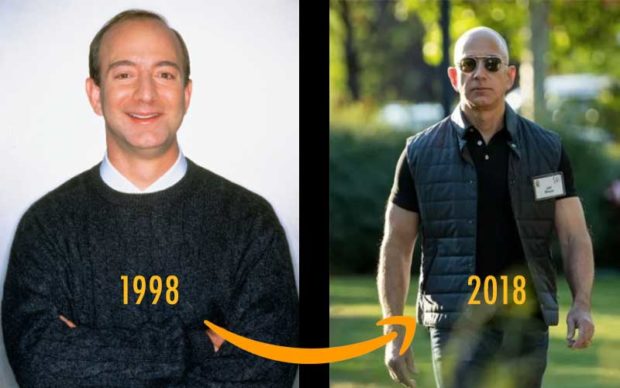 Investors in stock of Amazon Inc. (NASDAQ:AMZN) have made out like bandits in the past. Anyone who bought it 21 years ago, back in 1997 – and had the longevity and patience to hang on – multiplied their initial investment by 552 times. What needs to happen in future for the stock to make sense? A thought experiment.

Amazon was founded in July 1994 to sell books online. In the 12 months to June this year it generated sales of $147 billion (US dollars), from a range of businesses.

Then the tech bubble imploded and Amazon was far from immune. By 28th September 2001 the price had plummeted to just $5.97. That was up four times since the IPO, but down 94% from the bubble top. A wild ride indeed.

Since then, progress has been mostly in one direction – upwards. At the time of writing the price is $1,963.71. Here’s the full chart since the IPO (adjusted for the stock splits): 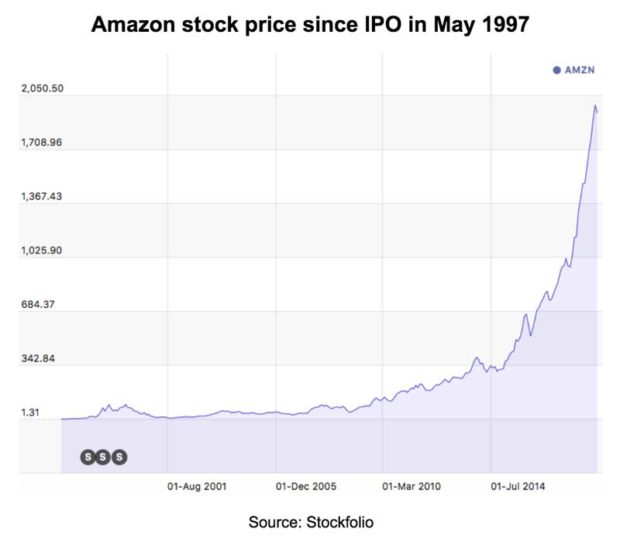 That’s an incredible return of over 35% a year for 21 years, with compounding (profits on profits). Of course, it would have taken a lot of belief to stick with it. Amazon is a company that rarely made a profit until just the past couple of years.

Below is a chart which summarises the split of sales by business in the second quarter of 2018. 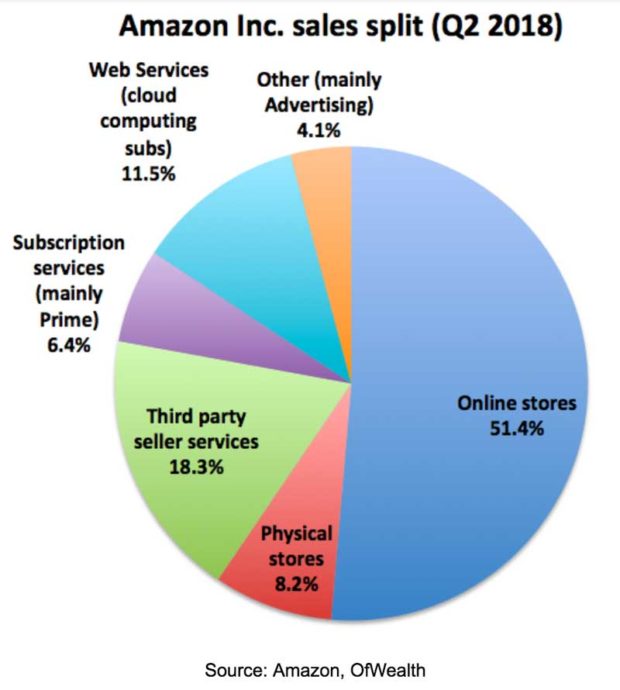 You can clearly see that sales are dominated by the online sales and distribution businesses, whether Amazon’s own direct sales (51.4%) or for third-party sellers (18.3%). Whereas Amazon Web Services (AWS) is just 11.5% of sales.

However, it’s a completely different story at the profit level. Unfortunately, Amazon doesn’t break out operating profit as much as revenues. But what we do know is that AWS contributed 75% of operating profit in the 12 months to June 2018, from just 14% of the sales. Everything else – accounting for 86% of sales – contributed just 25% of the operating profit.

Amazon’s shyness about giving more profit disclosure is most likely because the core business – of online sales and delivery – makes very little money…if any. Amazon has been very successful at taking huge market share from other physical and online retailers. It just forgot to make money in the process. In the meantime, AWS had a very healthy operating profit margin of 26% in the first half of 2018.

Put another way, Amazon is a conglomerate that combines a huge but unprofitable business (retail and delivery) with smaller but highly profitable ones (AWS, advertising, Prime).

Growth is mixed too. AWS – the profit core – grew sales by 49% between second quarter 2017 and the same period this year. At the lower end, online store sales rose 14%. At the top end, “Other” (mainly advertising) grew sales by 132%. Overall sales growth was a strong 39%, year-on-year.

What about the future?

Instead of getting into micro-details about the pros and cons of each business, I’m going to do a kind of thought experiment. The idea is, at a macro level, to see whether investors can expect a decent return from the stock in future.

In the second quarter, Amazon reported post-tax profit of a little over $2.5 billion. That’s by far the highest so far. So let’s use that as a starting point.

Multiplying by four, we get an estimate of current annual profit of $10.1 billion, at a steady state. The current market capitalisation of the company – the value of all shares at the current stock price – is $954 billion. This gives a price-to-earnings (P/E) ratio of 94.1, based on the profit run-rate of the last reported quarter.

Now let’s gaze out into the future. What kind of P/E multiple is likely to be reasonable in, say, 20 years time? By then, we should assume the business will be far more mature and slower-growing. We don’t know exactly what businesses the company will operate in, but sheer size will make it much harder to move the dial, in terms of growing sales and profits.

It seems reasonable that Amazon should trade at something like a blend of the two, given its mix of retail/logistics and technology businesses. That average would be 22, which is actually below the 25 that I’m assuming.

So, we’ve got a P/E for Amazon that we expect to drop from 94 to 25 over two decades, as growth slows. That’s a fall of 73%, equivalent to a compound drag on the stock price of -6.4% a year. In turn, how much does the profit have to grow for investors in the stock to make a decent return?

Well, that depends on how much investors think is a decent return for the risk of investing in Amazon stock. I’ll go low and say it’s just 10% a year, on average.

To achieve that, combined with the falling P/E, profits would have to grow by a factor of 25.3 times over two decades. That’s equivalent to a compound annual growth rate of 17.5% a year.

Does that sound reasonable? At first glance, perhaps, since sales are currently growing at a much faster clip. But the reality is that growth rates will slow over time. They’re likely to remain fast in the coming years, but will be much slower in a couple of decades (for the reasons already mentioned).

It’s difficult to get our heads around exponential growth over long periods of time. To make it easier to comprehend, we can break the 20 year period into smaller blocks. That 17.5% average growth rate over the full period is almost exactly equivalent to the following:

Is that achievable? Certainly. Is it probable? Maybe.

I’m not saying CEO Jeff Bezos and team can’t keep reinventing themselves and finding new businesses to get into. But it will get harder over time. The bigger the company, the harder it is to find new businesses large enough to keep up the overall growth rate.

On top of that, there’s the risk of government intervention. Amazon is already a big beast. I suspect it’s only a matter of time before we see more interventions from competition authorities. That raises the spectre of a company break-up or large fines.

The other risk comes from taxation. Amazon’s corporate tax rate was just 8% in the first half of 2018, showing management is doing a good job of legally minimising the tax paid. But I wouldn’t be at all surprised to see more governments getting tempted to slap new taxes onto top line sales of internet giants such as Amazon. A mere 0.5% additional tax on gross sales would increase Amazon’s overall effective tax on pre-tax profits to 20%.

(Note: this is different to a typical sales tax or value-added tax, where tax charged to the end customer is largely offset by tax paid to suppliers.)

In any case, I’ve run this scenario on the basis of investors making 10% a year over the very long run. That’s hardly a huge return, and certainly nowhere near what Amazon’s stockholders have made in the past.

Assuming that is actually a reasonable return expectation, investors would probably do just as well buying the S&P 500 index. At least the risks would be substantially lower.

As for where Amazon’s stock goes in the short run? That’s anybody’s guess. Just remember it’s crashed before, back in 2000 and 2001. With so much growth expectation baked into the price, any kind of disappointments have the potential to cause a sharp price fall.