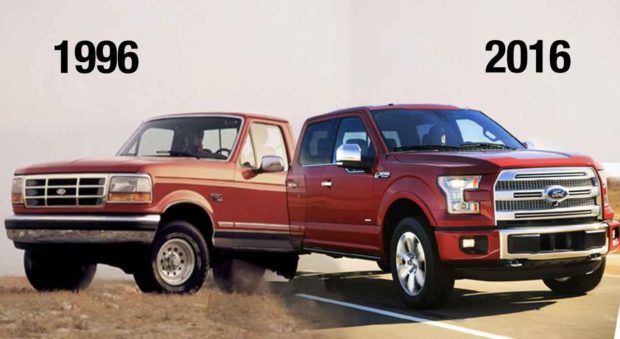 “There are three kinds of lies: lies, damned lies and statistics.”

People always act in their own perceived self interests. A core factor that influences economic and monetary policy is consumer price inflation, or the rate at which prices are rising. But it’s in the self interest of the economic and financial establishment to understate it. This has big implications for investors. So is the CPI really fiddled, and by how much? And what (if anything) can you do about it?

Let’s start with a chart. This shows US CPI over the past 20 years, and some of the sub-categories that feed into the headline number. 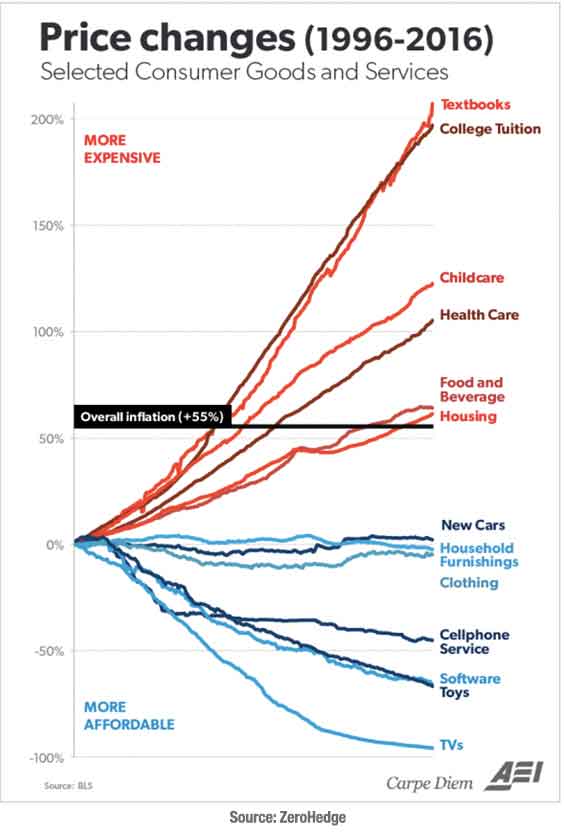 Official price inflation overall (black line) was 55% over that time, using data from the US Bureau of Labor Statistics (BLS). That works out at 2.2% a year, with compounding (price rises on top of price rises). The latest figures say that US prices rose 1.1% in the past 12 months.

Clearly there was a huge range of outcomes for the individual categories of goods and services behind the headline figure. Depending what you spend your money on – or what you need to maintain your standard of living – your cost of living will change at a vastly different rate.

College tuition (university fees) tripled in price over 20 years. Other big ticket items that more than doubled – the kind of thing that middle class families spend a lot on – include childcare (up around 120%) and healthcare (up about 105%).

On the other hand certain prices didn’t rise over time, or fell hard, at least according to the BLS. Toys fell around 70%, which sounds reasonable in a globalised world of low cost manufacturing in China and other emerging markets.

But look a little closer and some oddities jump out. According to the official data, car prices stayed flat in the past 20 years. The price of a new TV fell by 97%.

Hmmm. It sounds fishy, to say the least.

How do we check if this makes sense? Well, it’s not always easy to get old price data. But I found a couple of examples suggesting these figures are way off the mark.

Let’s start with cars. One of the problems is that the models are always changing, so you end up comparing apples to oranges. But I’ve found at least one “apple” that’s been on sale in the US for decades. The Ford F-150 pickup truck.

That’s a 20 year price increase of $11,545, or 77%. It works out that this popular workhorse has gone up in price by nearly 3% a year over the past couple of decades. That’s a big difference to saying that car prices haven’t moved, which is the official line.

That means the price is down 77%, which works out as just over 7% reduction each year, on average. So far so good. But according to the BLS the price of TVs in general is down 97%, which would need prices to have fallen by 16% a year. That’s a huge difference.

I appreciate that I’m not being hugely scientific here. But these two examples point to something going on. The official inflation stats look dodgy.

Now the BLS isn’t alone in this. Other countries in the OECD and EU use similar methodologies for CPI. But why do they get these strange looking results in some of the items?

There are two likely culprits, buried deep in the way that government statistics agencies crunch the numbers. These are “substitution” and the fancy sounding “hedonic quality adjustments”.

In a 2008 article the BLS furiously denied that these things result in dodgy numbers. But I think my two simple examples show there are good reasons to doubt their arguments.

The classic, but apparently wrong, example of this is that if steak prices rise faster than hamburgers then people are supposed to eat more hamburgers and less steak. Therefore hamburgers are given more weight in CPI and steak less, and standard of living is down.

The BLS says hamburger and steak are in different item categories, and substitution only happens within categories. But you can still switch from expensive filet mignon to cheaper flank steak. Across all categories substitution must have some effect.

Then there’s that “hedonic quality adjustment”. Hedonic is from the Greek word for “pleasure”. Just think of “hedonism”.

The reality is that hedonics aren’t exactly about pleasure. Instead it’s about usefulness. In other words, if something stays the same price but has added features then CPI will reflect a price fall.

This is especially important in the tech world, with things like computers and TVs. These products are constantly evolving and improving. It also probably explains why car prices are supposed to have stayed flat.

Although most people just care if a car will get them from A to B without breaking down, if you add anti-lock brakes, a fancy stereo, improved fuel efficiency and loads of airbags then that will hold down the price in the CPI stats. Never mind that when your car needs replacing it needs replacing, whatever the new features.

The same with that TV example. Nowadays a TV will be connected to the internet, and the picture quality and sound are supposedly better than 20 years ago.

As features are added, prices in the CPI are held down. Never mind that when a TV breaks these days it will be thrown away and replaced, instead of mended by the guy up the road for a fraction of the cost.

It’s difficult to know how much effect substitution and hedonic quality adjustments – or other fiddles – really affect the CPI. Some people, such as John Williams at Shadow Government Statistics, think CPI could be understated by as much as 7% a year.

Personally I think that’s seriously overstating the case. But based on my own experience I can easily believe official CPI should be 1-2% higher each year.

That may not sound like much, but it adds up over time. This has big implications for investors, who are looking to beat taxes and inflation by some margin.

Imagine an investor who is making a real return of 2% a year less than he thinks. The buying power from his retirement fund will be about a third short after 20 years. That’s a big deal.

One thing is certain. A lot of the establishment has a vested interest in underreporting the CPI rate, most of the time. This includes governments, central banks, commercial banks and the entire investment industry.

Governments want lower CPI because a lot of their payments increase in line with it. This includes things such as pension payments, welfare, and interest paid on inflation linked government bonds. It also gooses up the real GDP growth rate, so they can point to a stronger economy.

Central banks want low CPI so they can demonstrate that they aren’t destroying the value of a country’s fiat currency too fast. It also means they have an excuse to print money to prop up bond and stock markets for their friends in the financial industry.

The investment industry wants lower CPI so it can claim inflation-beating returns for customers, and justify higher fees.

Put that lot of players together, and don’t you think there’s a chance that official CPI is understated? I do, and it’s a good one. Do you trust the government, of all organisations, to produce unbiased statistics, of all things? I don’t think so.

So what can you do about it?

The best inflation hedges for an investment portfolio are stocks and gold. Bubbly bonds and cash held for the long run (instead of as “ammo”) are bad places to be.

Over the long run stocks have beaten inflation all around the world by a comfortable margin (for more see: Turbocharge your stock profits).

For its part, the gold price has comfortably beaten official inflation over the past 40 years, although not the return on stocks (for more see: here and here). Another way to look at it, perhaps, is that gold has matched actual inflation, but that official inflation has been understated.

Do you think prices rise faster or slower than the official stats where you live? I’d be interested to know your view.

Twice a week we help thousands of subscribers who share these goals with our free publication, the OfWealth Investor Thought Club.