If you have access to this article you’re in a minority. It’s freely available on the internet at no charge. But, even now, less than half of the world’s population has internet access. In other words we’re still near the start of the internet revolution, one of the defining trends of our time. This has major implications, not least for all investors.

It’s easy to take internet access for granted, especially if you come from a developed country. As best I can work out, I started using the internet regularly about 17 years ago. That’s three quarters of my adult life.

At that time only one in six people had internet access in the United Kingdom, where I lived at the time. So in that sense I was a relatively early starter – mainly because I had access to it in the office of the investment bank where I used to work.

Nowadays over 9 in 10 people in the UK use the internet. The rest are almost all too old or too young to care. Although I do have a sister and a friend – both middle aged – who still resist the internet’s onward march. Neither even has an email account. I don’t really know how they manage.

For people under 30 that live in a developed country, or come from a relatively well off family in a developing country, chances are that they’ve been online since they were a child. Using the internet is as much a part of their daily routine as waking up in the morning.

It’s difficult for such people to understand what things were like in the “dark ages” of the early 1990s and before. By the time my own young kids grow up I’m not sure that I’ll remember either.

According to the World Bank, just under 41% of people in the world used the internet in 2014. In other words, 6 out of 10 people didn’t have access. But the total percentage of users continues to grow quickly. 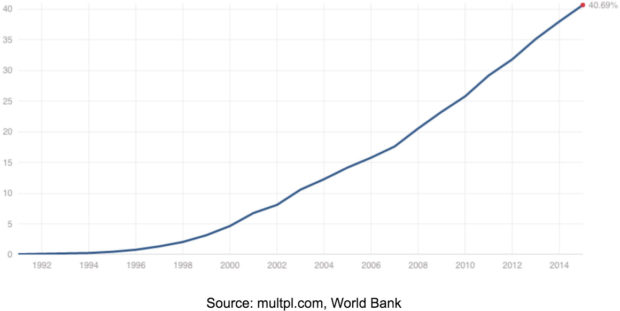 What’s more, under the World Bank’s definition, to be one of the lucky minority that has access, you only have to have used the internet once throughout the whole year. Just once in 365 days!

Presumably those with frequent internet access, at home or in the workplace, are even fewer in number. The internet cafe (remember those?), with its rows of PCs set up in cubicles, is alive and well in large parts of the world.

This is a key reason to favour emerging markets as our preferred long term investment destinations. Other major reasons include superior population demographics, a shift to market friendlier policies, much lower debt levels, and increasing urbanisation.

Whilst most of the country leaders and laggards for web access are not entirely surprising, there are quite a few countries that are further down the list than you might have guessed. Let’s take a closer look.

Topping the pile is Iceland, with over 98% access. It’s closely followed by Bermuda, Norway, Denmark and Andorra. Wealthy Scandinavian countries are cold and dark in winter, so it’s no surprise that the demand to get online has been strong. And Bermuda and Andorra are small places, so relatively easy places to build connectivity.

North Korea, unsurprisingly, comes last on the list. Officially there is no access to speak of. After that the laggards are dominated by poor African countries such as Eritrea, Timor Leste, Burundi, Somalia and Guinea. In all these countries – and more besides – less than 2% of the population can surf the web. The joys of Facebook still await them.

The USA – which is rightly regarded as a technology powerhouse – has 90% access. That places it at a surprisingly low rank of 18th in the world. In fact it’s never been above third place, way back during the dawn of the internet in the mid-1990s. Since then US  connectivity has expanded, but not as fast as in many other developed countries.

It’s also interesting that the world as a whole has similar levels of internet penetration today as the USA had in the year 2000, when it was at 43%. Of course the USA is a developed country, and most of the laggards are anything but.

However, it’s reasonable to assume that the world as a whole could achieve 80-90% internet access within the next 15 to 20 years. It’s easier to catch up than to be a first mover.

This is not least because remote areas are increasingly covered by satellite communications, where fibre optic cables were required once upon a time. I know several people with farms in South America, sometimes many hours drive from the nearest town, that are now connected via satellite (and powered by solar energy).

What’s more, proven online business models are relatively easy to replicate. Instead of pouring vast amounts of capital into experimental ideas, entrepreneurs around the world can simply copy what’s worked elsewhere, with a few tweaks to accommodate for local tastes. The failure rate of online businesses in emerging markets is likely to be much lower than during the internet’s early days in developed countries, with all its dead dot coms.

(As an aside, it’s interesting to note that two of the most successful early pioneers of online business models were the stock broking and pornography sectors. Make of that what you will.)

The internet revolution is alive and well. Billions more people are set to come online in the coming decades. This is a simply massive trend that can’t be ignored. As elsewhere, old business models will be challenged (see here for one example), new businesses will emerge rapidly, and the ways that people go about their daily lives will change dramatically. 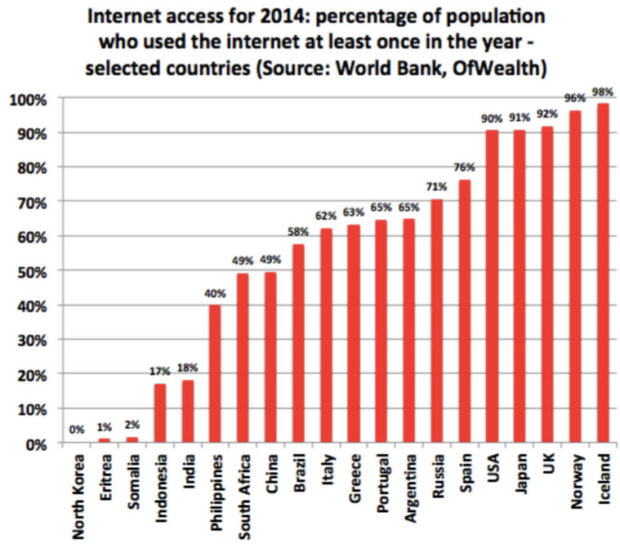 The middle of the pack is interesting too. Russia (70%) has higher connectivity than Portugal (65%). Argentina (65%) beats Greece (63%) and Italy (62%). Who’d have thought that so many people within Western Europe would still be without internet access these days?

That’s the eighth largest economy in the world, is core to the European Union, is wealthy and densely populated, and yet is less connected than Argentina or Russia.

I mean Italy, for goodness sake. That’s the eighth largest economy in the world, is core to the European Union, is wealthy and densely populated, and yet is less connected than Argentina or Russia.

On the other hand India, that great centre of technology expertise, has only 18% access to the internet. But that’s increased from 10% in 2011, and is also growing fast. Indonesia – population 250 million – is similar to India, at 17%. But neighbouring, and poorer, Philippines is doing much better at 40%.

The overarching theme is that internet users remain a minority, but the rest of the world is catching up fast. The internet revolution is still in its early days and has many decades still to run.

Given the changes that we’ve already seen to how we live it’s extremely hard to guess what could happen over the next 10, 20 or 30 years. The pace of change is fast. Many will find it hard to keep up, both in their private and business lives.

Of course the internet has delivered many benefits to many people. OfWealth couldn’t exist, and you couldn’t read it in a timely fashion, without the internet.

At the start of my banking career, back in the early 1990s, if I wanted to research a company’s accounts for the past few years I had to put in a request to the bank’s in-house reference library. A wait of two or three days ensued, as photocopies of thick tomes were made by the librarians. Nowadays I have everything at my fingertips, and can start reading on screen within minutes.

Shopping for household goods…buying car or home insurance…banking and paying bills…booking travel and hotels…staying in contact with friends and family…having a heated debate with strangers…buying and selling stocks…booking a taxi…reading thoughts on investment…all, and much more, are merely a few clicks away. (I don’t remember the last time I wrote someone a letter on a piece of paper.)

At the same time we have had to adjust to the constant deluge of personal messages and 24 hour news – not to mention the advertising. Meanwhile many companies have outsourced more and more administrative tasks to their customers, to try to keep costs down.

We’ve mostly said goodbye to the helpful member of staff at the end of the phone, nowadays replaced by endless online form filling and payment authentication. Keeping track of all the login IDs and constantly changing passwords is a major task in itself.

It’s not clear to me that the internet has improved private or commercial productivity, when taken in the round. Some areas of life have been enhanced. Others have been degraded.

The increased transparency of the internet may have driven down the prices of many goods and services. But we pay for it with our time.

The increased transparency of the internet may have driven down the prices of many goods and services. But we pay for it with our time. Not least the constant distractions of saturation level communications.

I remember how the volume of work emails took off exponentially when people started using portable devices like the Blackberry. Nowadays we can add Twitter, Facebook, LinkedIn, Whatsapp, and other, seemingly endless new channels of constant chatter.

But, examined from an investment standpoint, remembering the ongoing internet revolution is essential. The laggard countries are mostly emerging or frontier markets. The process of catch up will continue to boost their economies, as new channels for consumption are opened up, and new global markets are tapped.

There will be winners and losers as the internet continues to expand. The only certain thing is that the changes will continue on a massive scale, as billions more people come online for the first time, and have to adapt their lives to keep up.