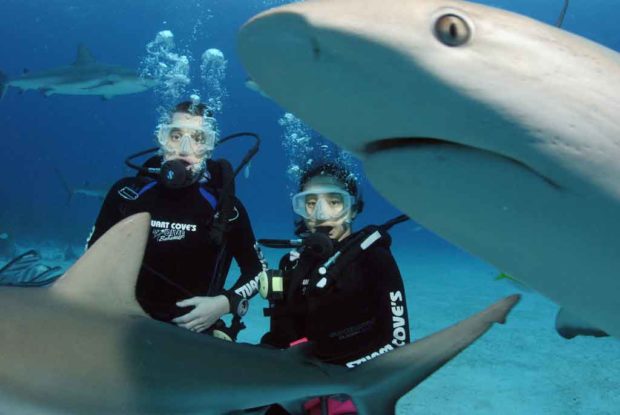 When something is described as “volatile” it’s usually seen as negative. Volatile substances are seen as dangerous. Volatile people are expected to blow their top at the slightest provocation. It’s the same with investments. Stock price volatility is seen as a bad thing. But price swings aren’t bad at all. If fact they’re a gift from the market mob to the smart investor.

Almost all investment theory teaches that price volatility is a bad thing. That big price falls are dangerous, and synonymous with “risk”.

And the truth is that they are, at least for most of the people active in the markets. But they shouldn’t be for you, the private investor. In fact price volatility should be seen as great news.

So why the difference?

Companies that sponsor employee pension funds hate volatility. If the market price of their investments collapses then regulations force them to pump more cash into the pension fund to make up the deficit, which hits company profits.

The same is true for insurance companies that have to hold huge reserves to cover possible future claims. If the reserves are short then they get regulators on their backs.

Price volatility can be deadly for highly leveraged investments banks and hedge funds as well. It only takes a big loss in a small part of their assets to wipe out their capital.

Fund managers that show big losses in a year face big withdrawals of investor funds. That can mean slashed bonuses or even getting the bullet from their employers.

Short term speculators and momentum traders, who are trying to second guess short term market moves, also get killed by volatility. Price crashes leave them nursing realised losses as they sell lower than they bought.

But you aren’t any of those things, or at least you shouldn’t be. You’re a private investor, which means you’re playing a long game.

Don’t just take my word for it. Volatility has been described as “a long term investor’s best friend” by none other than Warren Buffett, one of the greatest investors the world has ever known.

However, I’ll bet that you need a lot more convincing on this one. It’s so deeply ingrained in us that price volatility is bad that it can be hard to get over it. It took me years.

That’s partly because of our in-built emotional biases and fear of loss. But it’s compounded because we’re repeatedly told as much by finance theorists, TV “gurus” and market practitioners alike.

But to repeat: as a private investor you don’t have to behave like the rest of the market mob. You have the luxury of taking a long term view that is denied to most other actors.

Volatility is something you should embrace and take advantage of. It’s not something to worry about.

I’ll explain what I mean with some examples.

Imagine the stock of a company. It’s fair value, meaning what it’s actually worth, is $100. It also happens to be its market price at the current time.

This stock is unusual, as the market price is always the same as its fair value. I’ll use Warren Buffett again to succinctly explain the difference between price and value. He has said: “Price is what you pay. Value is what you get.” (For more on why this matters see: “Turbocharge your stock profits.”)

The stock price goes up 5% a year, at the same rate that company earnings grow. Also the stock pays a 4% dividend yield. That means an investor will make 9% a year, adding together the price gains and the dividend income. After 10 years the stock price will rise from $100 to $162.89, with compounding (profits on profits).

Now let’s say you invest $1,000 to buy 10 shares. Then you reinvest all dividend income by buying extra shares at the end of each year. Also let’s assume no income tax on dividends and that you can buy part shares – this is just an illustration, after all. 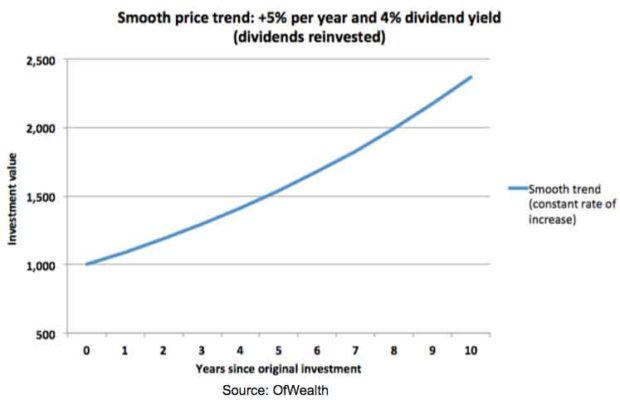 According to theory, and most people’s beliefs about investing, that would be a great result. Smooth progress and decent profits. And apparently it’s “low risk”, since there were no wild price swings.

So let’s debunk those theories and beliefs. We’ll do that by adding three alternative scenarios. Each applies to exactly the same company stock, just with different price progression between the start point and the end point of the ten year period.

Also the underlying company hasn’t changed. It still makes the same profits, still grows at 5% a year, and pays out the same amount of cash dividends per share (DPS).

So here are all the four scenarios: the original one and the three new ones.

Here’s how the scenarios progress over time. 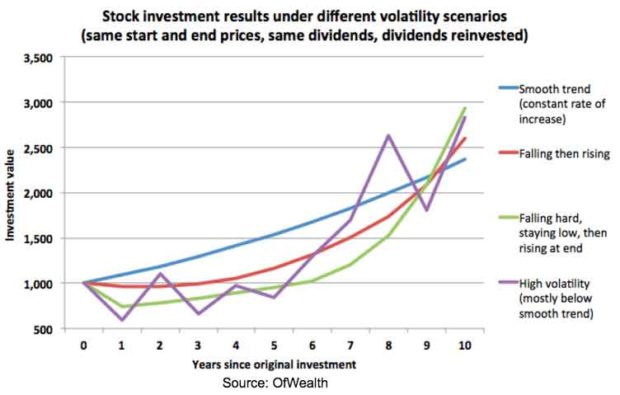 The most obvious thing here is that ALL the new scenarios end up making more money for the investor than the original one.

So much for price falls and volatility being “bad” or “risky” things. All of the new scenarios include both of those things to a greater or lesser degree.

(If you want to see more data on how I constructed the scenarios then see the table at the very end of this article.)

So what’s going on? The are two key things that give us these results.

Whichever route the prices take from start to finish, over 10 years, most of the time the stock price is lower under scenarios 2 to 4 than it is under scenario 1.

Secondly the dividends are being reinvested. Since prices are generally lower under scenarios 2 to 4 that means that more new shares are bought with the dividend cash than in scenario 1. This means there are more shares, worth more money, at the end. It also means that dividend income is higher because more shares are owned.

Here’s how it breaks out:

The highest profit comes from scenario three. In that case the price falls hard at the start, stays low for many years, and then only rises back to fair value towards the end. Because this scenario has the lowest prices on average, the dividend income buy the most extra shares, and the end result is worth the highest amount.

The highly volatile scenario 4 also gives a great result in this case. Which is quite something given that it starts out with a 45% price crash (see the table at the end). Although the price is all over the place it’s generally pretty low, meaning lots of extra shares are bought.

But in fact the scenario four investor would have done even better if they’d sold in year 8, when the price was well above fair value, and bought again at the end of year 9, when the price dropped hard. That would have maximised the advantage of the price volatility.

Even scenario 2 does better than scenario 1. This is where the price falls modestly for a few years after the initial purchase before climbing back to fair value.

But I can hear some of you protesting. If the prices had been above the smooth trend line most of the time then wouldn’t the investor get a worse result?

Yes they would. But why would the investor hold on to the stock if the price was substantially above fair value? That would be time to sell and move on to the next investment opportunity. So that’s what the smart investor would do.

The key thing here is to ignore price swings, in and of themselves, and take advantage of low prices when you can. Volatility is not a “risk”, it’s a gift that means the market serves up bargain prices from time to time, when the mob is looking the other way. It also gives you the chance to sell high, when your stock comes back into fashion.

But that’s not the full story. You still have to approach investing in the right way if you want to profit from volatility. Next time I’ll look at the things that you absolutely MUST do, or avoid, when investing in stocks.

In the meantime, let me know whether I’ve managed to persuade you that you should learn to love wild price swings…that volatility is actually your friend.

Additional data in the four scenarios