A common justification for high stock valuations is that interest rates are low, and likely to stay that way. But low or falling rates and bond yields haven’t always resulted in lofty stocks. In fact, in at least one notable case, falling bond yields have done virtually nothing to prop up stocks. US stocks are trading at high multiples. But do (still) low rates really justify them?

Almost all current fund managers got into the business after the early 1980s…some much later. That means they’ve enjoyed an astonishingly rewarding period for investors. Decades of falling yields have ensured outsized returns for holders of both stocks and bonds.

Of course, there have been inevitable bumps along the way. But anyone that owned a combination of stocks and bonds is likely to have done pretty well.

However, this was an abnormal period of market history. That fact was brought home to me recently when I saw the following chart from Albert Edwards of Societe Generale. Yields of stocks (equities) and bonds don’t always follow the same, long term trend.

Edwards is a highly ranked strategist who’s famous – some might say infamous – for his “Ice Age” theory. He thinks that the US is in a long term, structural economic downturn that started in the late 1990s. The effects been postponed by ultra low interest rates and massive monetary stimulus. But the underlying trend will reassert itself at some point.

This means that the current bull market is US stocks is merely a pause in a longer term divergence of stocks and bonds. In other words, if the Ice Age idea is right then bond yields will fall even further – possibly into negative territory – and earnings yields of stocks (equity yields in the chart) will rise.

If that theory is right then bonds will be excellent investments for many years to come, despite their apparently low yields, and investors in stocks are in for a big shock.

Clearly this is very different to what most people argue, especially as regards stocks. They’d say that stocks look cheap relative to bonds since earnings yields are so much higher than bond yields. So stock valuations are justified.

Of course, it’s not hard to come up with other developed markets where bond yields are even lower than the US, but where stocks are cheaper. At least in relative terms. Germany, Switzerland, Hong Kong and Singapore all spring to mind.

The optimists might argue this means stocks are cheap in those countries. Indeed they might be. Or that US companies are somehow in a better spot than those of other countries. But, equally, US stocks could simply be relatively expensive.

To help us solve this riddle there’s another developed market that we can look at. It’s had faster growing corporate profits than the US for many years. It’s also had lower bond yields, including right now. And yet, despite this happy confluence of factors, its stocks have remained steadfastly cheaper than those of the US.

That place is Japan. Yes, yes, I know. Lost nearly three decades…zombie companies…hopeless policies…too much debt…etc etc. But bear with me on this one.

I’ll get back to showing you how falling bond yields don’t necessarily mean elevated stocks in a minute. First a couple of general points about the Japanese stock market.

I was pretty sceptical about Japanese stocks for a long time, but changed my mind at the end of August last year (see here for more). I reckoned Japanese stocks had finally become cheap enough to be interesting, although there was currency risk.

So I recommended buying the WisdomTree Japan Hedged Equity Fund (NYSE:DXJ) to readers of the OfWealth Briefing. It’s done nicely, with the price up 21.8% since then, plus 1.3% in dividends for a total profit of 23.1% in less than 10 months. It’s still reasonably priced. Here’s a chart showing it (in blue) over that period against an S&P 500 index ETF.

In recent years there’s been a surprising boom in Japanese corporate profits. In fact they’ve left US and European profits far behind (see here for more).

I find it pretty amazing how much US stocks have gone up given the pathetic progress of US profits in recent years. Here’s a chart of real (inflation-adjusted) earnings-per-share (EPS) for the S&P 500 over the past decade, including any effect from stock buybacks and stock issuance, and indexed to start at 100 in 2006.

(Note: this uses net GAAP earnings and not one of the fictions often presented by individual companies or stock analysts.) 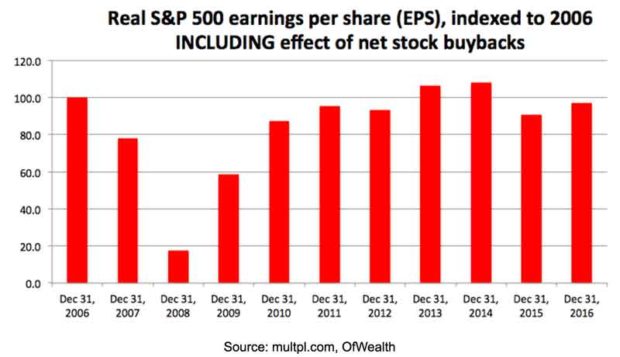 Obviously banks got nailed in the global financial crisis, and had to issue a lot of new stock, which diluted EPS (earnings are now divided by more shares). But shouldn’t the supposedly booming tech sector have made up for it by now? Or the huge wave of supposed stock buybacks? There hasn’t even been any real EPS growth in the past four or five years, long after the worst of the crisis.

Put another way, US stocks have risen mainly due to multiple expansion, which can never go on forever. But, in any case, this is fairly recent stuff in the really grand scheme of things.

What about the longer term? Does what’s previously happened in Japan tell us anything about future prospects for US stocks? 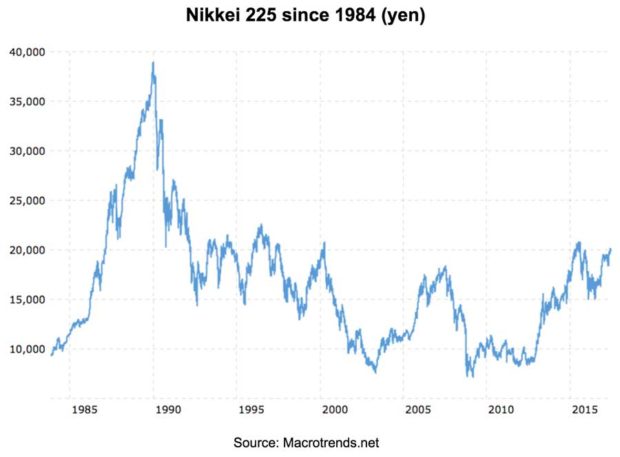 Obviously there was the infamous late ‘80s bubble, and it’s been grim for Japanese stock investors most of the time ever since. Even if we look at similar figures in US dollars – as shown in this next chart of the MSCI Japan index – the picture isn’t much better. 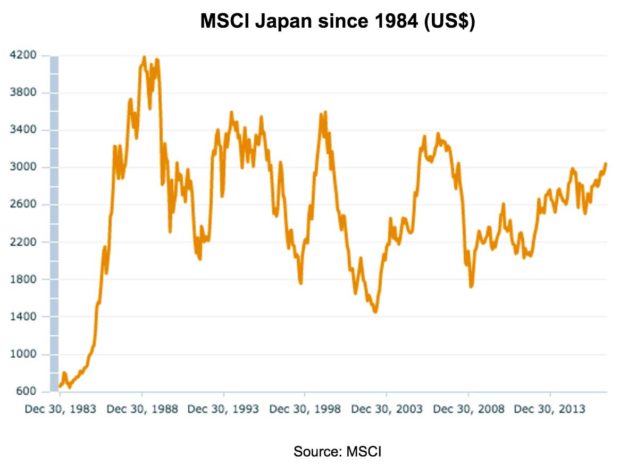 This terrible performance – after the earlier bubble – was during a period of falling bond yields. My next chart looks at the yield on 10 year Japanese government bonds (JGBs), also since 1984. 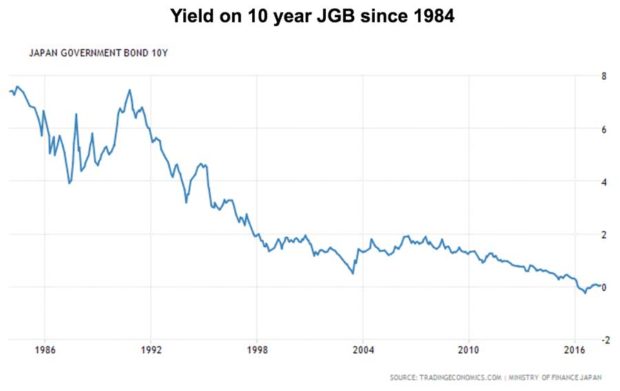 Now compare that with the yield on 10 year US treasury bonds (USTs) over the same period. Where the US yield stands today is similar to where Japan got to in the late 90s. That didn’t stop Japanese stocks going sideways for two more decades until now, via some significantly lower lows (see 2003). 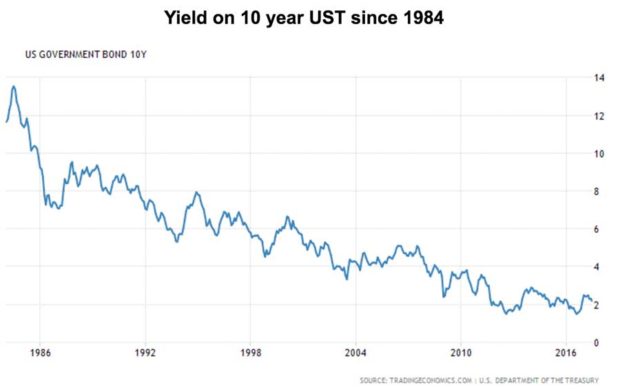 In other words, lower and lower bond yields don’t necessarily prop up stocks. And remember: Japanese companies have grown their profits faster than their US counterparts during a lot of that time.

It’s also worth noting that both countries target a consumer price inflation (CPI)  rate of 2%. Although Japan’s CPI is currently 0.4% a year (a lot under) and the USA’s is 2.2% (a little over).

Oh, and whilst quantitative easing (QE) in the US may be on hold, in Japan the QE even includes the buying of stocks, and not just bonds. (QE is when the central bank creates new money to buy financial assets in the markets – usually bonds, especially government ones – thus creating new bank deposits.)

Given all of this, you’d think Japanese stocks would trade on fatter multiples that US ones. But the MSCI Japan index had a price-to-earnings (P/E) ratio of 15.4 at the end of May, against the MSCI USA’s 23.3.

Parallels to the US?

Japan is a technologically advanced society with huge financial markets. After the late ‘80s stock and real estate bubbles it spent a lot of time trying to stimulate its economy with infrastructure spending. It borrowed heavily to do it. It slashed interest rates. It did (does) masses of QE.

Hmm. Does any of that sound familiar in the context of the US? Either in the recent past, the present, or regarding plans for the future? It certainly does to me.

Of course there are huge differences between Japan and the US. But, given Japan’s unhappy experience, I don’t accept the simplistic mantra that low interest rates or bond yields somehow justify sky high stock market valuation multiples.

I’ll leave you with one more chart, also from Albert Edwards from Societe Generale. It compares the ratio of bond yields to corporate cash flow yields for the US and Japan, but with Japan delayed by 10 years. As the line falls it means bonds are becoming more expensive relative to stocks, or stocks are becoming cheaper relative to bonds. 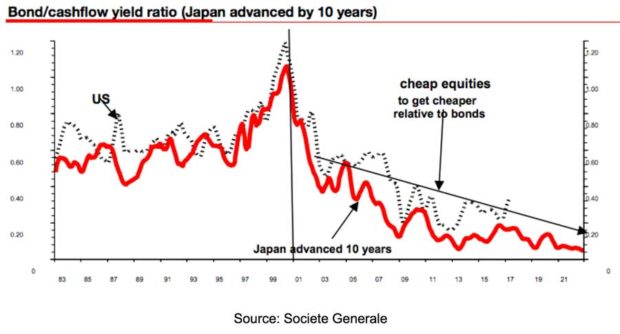 If the US does end up having a similar experience to Japan, US stocks will be a disaster in coming years. And I’ll have to re-think my current zero weight allocation to US treasuries.

Or maybe this idea is just plain wrong? Personally I think US stocks are richly priced. But the idea of US bond yields falling much more, except perhaps as a short term reaction to a stock market crash, seems less clear.

Let me know what you think.