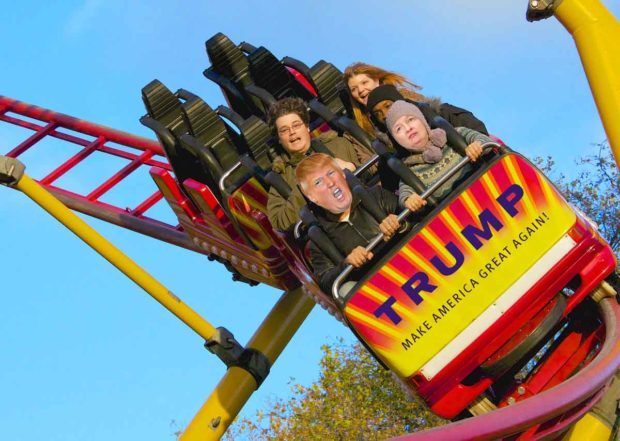 Donald Trump’s plan to slash corporate taxes turned a lacklustre year for US stocks into an above average one. Following the Trump rally, investors in the S&P 500 saw a profit of almost 12% during 2016, including dividends. But among all the market euphoria, everyone seems to have forgotten themselves – quite literally. Market forces – the “invisible hands” that made America great in the first place – should ensure that any boost to profits is fleeting and temporary.

First a reminder – US stocks are in a bubble. Or at the very least they’re approaching the final ascent up bubble mountain.

Here’s the chart I put together recently that says it all. (See here for a full explanation.)

The market excitement about Trump’s plans mainly hinges on one policy promise. That’s his plan to slash the US federal corporate tax rate from 35%, which is bizarrely high in international terms, to 15%, which is competitively low.

The theory is that this should boost corporate profits, making stocks more valuable. A cut from 35% to 15% tax rate would be a boost to net earnings of 31%, all other things being equal.

But it’s not that simple. There are tax breaks, or “special deductions”, which bring the current tax payments down. And big corporations in the S&P 500 make a lot of money overseas, which means they pay overseas tax rates. About a third of their revenues are outside the US.

The actual tax rate paid by big US corporations is currently around 29%. Assuming they pay 15% in future on two thirds of income (US share) and 25% on the other third (overseas) that would bring the combined rate to 18.3%.

Going from 29% tax to 18.3% tax would be a boost to S&P 500 corporate profits, on average, of about 15%. That’s what’s got the market so excited, assuming the policy isn’t watered down too much before it’s turned into legislation.

Of course there are some instant headwinds for corporate profits and stock prices as well (see here, here and here).

But there’s an even more fundamental reason why the proposed corporate tax cuts could have only a fleeting effect on corporate profits.

It’s the basic foundation of the entire US economic system. It’s what made the American economy great – even if this factor has been in decline in recent years.

Specifically I’m talking about competition. Even more specifically, this is about the market’s tendency to compete away excessively fat profit margins and excessively high returns on capital. (If they’re too low, eventually people pack up and leave.)

Big returns attract new market entrants. Or they encourage current participants to cut prices with the aim of adding market share. Product prices are bid down until a new equilibrium is found.

At the end of September 2016, using data from Standard & Poors, the companies in the S&P 500 index of US stocks had net profit margins after tax of 7.8%. That’s how much is left from top line sales after all expenses have been charged and taxes have been paid.

At the same time the S&P 500’s return on equity (RoE) is 11.6%. Return on equity is how much net profit is generated from the net assets of the company, expressed as a percentage. Net assets are assets (things owned) less liabilities (things owed), and are also known as book value or shareholders’ equity.

(Note: you can also easily get the RoE by dividing the price-to-book ratio, or P/B, by the P/E. The result is earnings divided by book value – or “equity” – giving E over B or return on equity, expressed as a percentage. In this case it’s 2.8 divided by 24.3.)

For some reason – and as noted by such people as Warren Buffett – the RoE on US stocks always tends to be close to 12% in the long run. It doesn’t matter whether the economy is booming or busting, whether inflation is high or low, the current level of interest rates, whether stock valuations are low or high. It just always seems to come back to about this level, even if it can fluctuate wildly in the short term (such as during a financial crisis). This has been the case for many, many decades.

Why that has been the case is seriously difficult to understand. Buffett doesn’t seem to have an answer, and I certainly haven’t come up with a good reason yet, although I’m thinking about it. (If you have any suggestions then please email me at the address below).

But in any case, up until Trump’s election big US companies recently made 11.6% return on equity, consistent with the long term average. And their net profit margin averaged 7.8%.

Now let’s go back to what happens if corporate taxes are slashed. Just for a minute let’s assume there’s an initial and immediate boost to corporate profits of 15%. Return on equity would jump to 13.3% and net profit margin would pop up to 9%.

This table shows how things would look for the average S&P 500 company. I’ve set post-tax profit at 100 before the changes, to make it easy to see that happens to the number that matters. Revenues and expenses are set in proportion to post-tax profit and the net profit margin before the changes. The only things that change are the tax rate and the net profit. 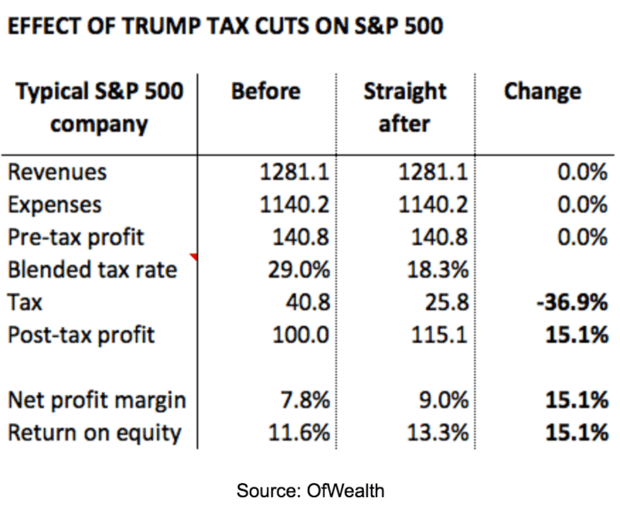 So far, so good. But there’s a big problem.

Surely, if companies’ returns on capital and profit margins are suddenly up 15%, wouldn’t this attract new competition? Wouldn’t companies be able to cut prices and still make an attractive return on capital? Wouldn’t they have to if they want to protect market share from aggressive competitors?

And if the economy is suddenly going to boom – as Trump promises – won’t wages rise as unemployment falls, meaning higher costs for companies? And won’t interest rates keep rising from artificially low levels, adding to the interest costs of companies?

In short, if current levels of net business profitability are acceptable, won’t the same levels be acceptable in future?

The key question then becomes: by how much do either sales revenues need to fall or expenses need to rise for net profitability to return to the same level as before the tax cuts?

Strikingly, the answer is by very little. In fact, either a fall of revenues of just 1.4% or a rise in expenses of just 1.6% would bring profitability back to the pre-tax cut level (under my assumptions).

The reason the moves are so small is down to something called “operating leverage”, which is a fancy way of saying that expenses eat up most of revenues in most companies. You only need a small change to either revenues or expenses for a big change to profits.

This table summarises it. You’ll notice that post-tax profit comes back to 100 in both cases – which was where I set it in the pre-cut scenario. 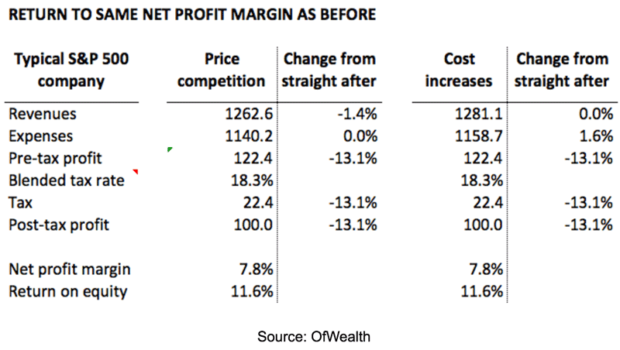 In other words, for all the excitement over Trump’s corporate tax plan, either a tiny cut in revenues or a minimal increase in expenses – or a miniscule adverse move in both simultaneously – will completely offset any expected benefit from the reduced corporate tax rate.

Of course, with lower prices or higher wages sales volumes should increase. But to support that faster growth companies will need additional capital. And that means lower cash pay outs via dividends and stock buybacks, as more money would have to be reinvested in business growth.

So companies could grow faster, but that doesn’t mean higher investor profits must follow. Cash distributions could be substituted for capital gains – with potentially no net benefit to investors.

That doesn’t mean the idea of cutting ridiculously high US corporate taxes isn’t a good one. Tax cuts are mostly a good thing as they leave more money in private hands.

Private hands are not perfect, but they’re usually less wasteful than government ones. And even if you don’t agree with that, at least when money is in private hands people get to choose how to waste it, instead of having waste forced upon them by central planners (indirectly, via taxes).

But in this case – beyond a very short-term effect – the corporate tax cuts are most likely to benefit consumers (with lower prices) and possibly workers (higher wages).

On the other hand stock investors stand to gain little, once reality sinks in. Market forces should kill the Trump rally.

In the meantime the US stock bubble continues…