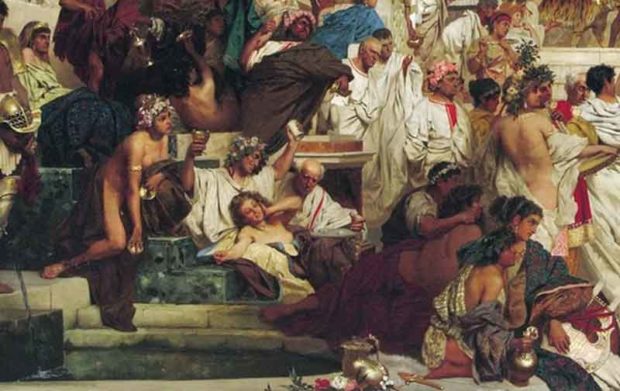 I’ve written before about the world’s debt problem (for example, see here). But today I’ll focus on a couple of debt-related areas that present particular risks for US stocks.

Interest rates and bond yields are rising, especially in the US. Last week, I explained why this could lead to disappointment in the earnings of highly leveraged companies, along with other factors such as wage inflation (see here).

Just today, the new Fed head, Jerome Powell, said policy makers may have to raise US rates during 2018 more than the three times that were previously expected.

With that backdrop, I’ll focus on a couple of specific risks facing pricey US stocks. These are debt-funded stock buybacks and the record level of margin debt currently being used by traders.

On top of that, Goldman reckons that dividend payments will reach $515 billion this year. That means total distributions to shareholders will be $1,165 billion. That’s about 4.9% of the S&P 500’s total market capitalisation of $24 trillion.

(By the way, the net shareholder yield is far less, once you take into account the issuance of stock. A lot of buybacks are done merely to transfer stock from outside shareholders to corporate insiders that have executive stock and option plans. Plus, new stock is issued to raise new capital, for investment or acquisitions, or to avert bankruptcy. Analysis I’ve done shows the combined offset typically runs to 2% to 2.5% a year. That would bring the net shareholder yield in 2018 for the S&P 500 – dividends plus net buybacks – down to 2.4% to 2.9%.)

The first big problem with buybacks, and something they have in common with corporate acquisitions, is that companies tend to do most of them at the worst possible times. That is, companies buy the most stock when it’s highly priced, and the least when it’s cheap.

Clearly, buying at the top of the market is throwing money down the drain. But it’s done to goose up earnings-per-share (EPS) growth figures. Financial engineering of this type is easier than actually growing the underlying businesses. It also transfers value from outside shareholders to corporate insiders, since a lot of the stock purchases end up in insiders’ hands.

Even worse than that, there’s a big link between the amount of stock buybacks and how much new debt the companies take on. Cash flows aren’t sufficient to cover all of the cash needs, including dividends, capital expenditure, acquisitions AND buybacks. Debt is typically used to make up the difference, as shown in this chart from 1990 to 2015. 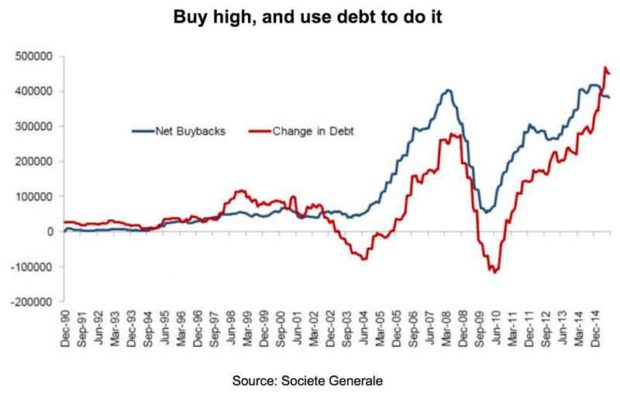 This makes for a pretty toxic combination. Buybacks are mostly done at the worst time, when stocks are pricey, and using debt, which adds to corporate leverage and increases financial risk.

Which brings us on to the next problem. US corporations were by far the biggest buyers of US stocks in recent years. In fact, since March 2009 they’ve outstripped the only other large buyer, mutual funds and ETFs, by a factor of two. That’s shown in the next chart of cumulative purchases (or sales) over time. 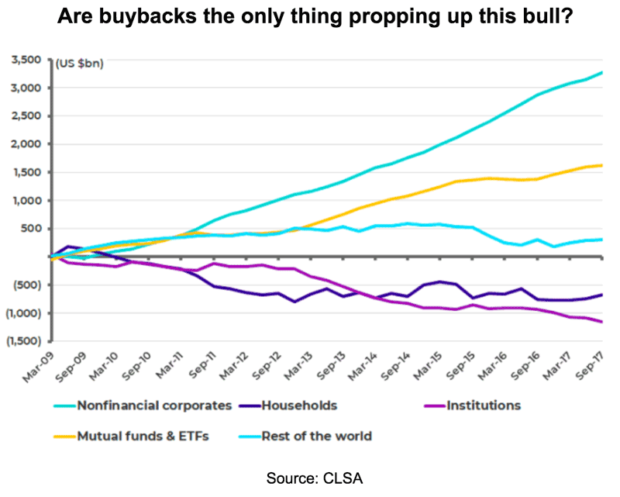 To recap, US stock buybacks have been running at elevated levels for years. This year may see a new record. But record buybacks tend to happen at market peaks.

On top of that, a lot of buybacks are funded with new debt. But borrowing costs are rising, at already leveraged companies. This will hit earnings, but also may force companies to curtail buybacks. Given corporations are the biggest buyers of pricey US stocks, this doesn’t bode well for the market as a whole.

The other market debt problem

In the letter, Buffett reminds us that investors should never borrow money to buy stocks. That’s a view I totally agree with, and it’s particularly relevant this late in a long bull market.

As he puts it: “There is simply no telling how far stocks can fall in a short period.” That’s when leveraged investors become forced sellers.

He uses the example of Berkshire’s own stock price. Since 1964 the company has increased its net asset value at a rate of 19.1% a year, although it was only 10.5% a year over the past decade.

Most of the value of a stock, even one of a very solid company, is derived from far out into the future (as I recently explained here). Yet Buffett highlights four instances when his own company’s stock fell by between 37% and 59%, due to nothing more than short term market sentiment. It’s summarised in the following table.

Buffett runs a company with rock solid finances, and has an excellent, long-term track record. Yet even Berkshire’s stock price collapses from time to time.

Which brings me on to the other debt problem stalking US stocks: the current record high levels of margin debt. This is where traders borrow to speculate on rising stocks, hoping to goose up their returns.

The problem is that if markets turn, and prices drop sharply, then leveraged speculators become forced sellers, as brokers call in the loans (or make “margin calls”).

In other words, high levels of margin debt make stock markets more prone to fall hard. What might have been a correction of 10-20% could turn into a rout, with stocks falling 40-50%, as waves of forced selling driving down prices for a time.

(Once the dust has settled, the latter situation is, of course, the best time to scoop up some bargains.)

This next chart shows how levels of US margin debt (red line) have gone up much faster than the S&P 500 index (blue line) over time, and also how margin debt peaks coincide with stock market peaks. 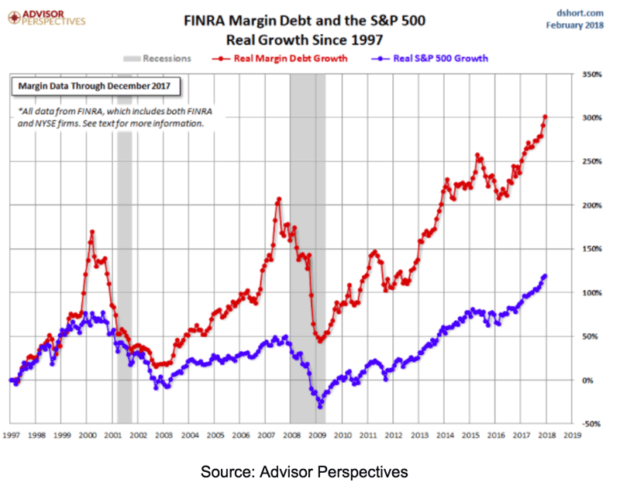 According to FINRA, US margin debt reached a record $666 billion at the end of January. (If that isn’t an ominous number, then I don’t know what is…)

That, in itself, doesn’t mean much. But I’ve crunched the numbers, and it turns out the ratio of margin debt to US market capitalisation is at an all time high of almost 2%.

Investors and traders now have more margin debt, relative to the market, than at any time before. That includes during the previous market peaks in March 2000 and October 2007. 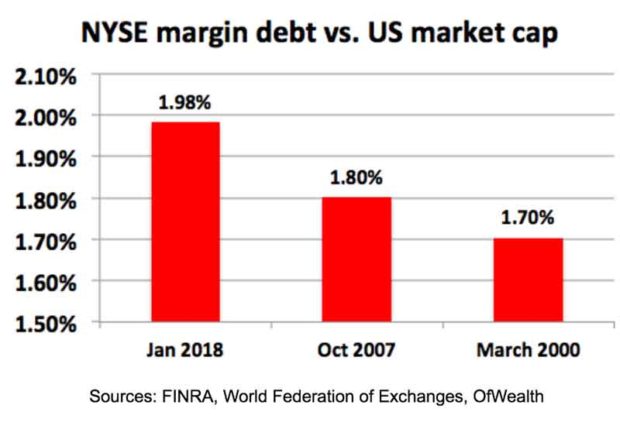 With US rates set to rise, this gives plenty of cause for concern. Buybacks and margin debt are both at record levels. High levels of both have coincided with market peaks in the past.

My view is that these factors increase the risks in an already pricey market, which continues to labour under irrational complacency.

This doesn’t mean a crash is necessarily just around the corner, although it could be. But I believe it’s a good time to be cautious, especially this late in the bull run.

So what should an investor do?

I continue to recommend a 40% allocation to stocks, but only where prices are already sensible. This means digging around for value, when it can be found. Those kinds of stocks will still do well in the medium to long run, even if a market crash disrupts their prices in the short run.

At the same time, I recommend 35% as cash “ammo” (deposits and treasury bills), to be used when bargains are more easily found. It’s a drag on returns for now, but will more than make up for it after any big correction or crash. Incidentally, Berkshire Hathaway is sitting on $116 billion of cash and T-bills, as Buffett & Co. wait for better bargains to come along.