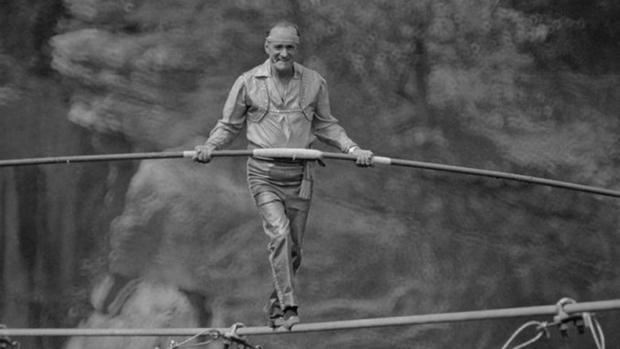 Crash. Turmoil. Plunge. Rout. These are just some of the words used to describe what’s happened in markets in the past week or two. I’ll use a less dramatic description. It’s a wobble…at least, so far. Plus, it’s a timely reminder of why I recommend investors should have a relatively cautious portfolio allocation in current markets. Let’s look at what’s been going on, and what to do about it.

Stocks are down. Bonds are down. The US dollar is down. Gold is down.

In the short term, safe havens have been mightily thin on the ground.

Below is a three month chart comparing three ETFs that track major assets, priced in US dollars. These are the S&P 500 index of US stocks (in red), long-dated US treasury bonds (in green) and gold (in yellow). The ETFs are the SPDR S&P 500 Trust ETF (NYSE:SPY), the iShares 20+ Year Treasury Bond ETF (NYSE:TLT) and the SPDR Gold Shares (NYSE:GLD).

The first thing to note: there’s no need to panic. Well, that’s assuming you’re not heavily leveraged and trading on margin.

(Which I very strongly urge you not to do when it comes to potentially volatile financial investments. No one should ever allow themselves to be a forced seller when markets fall.)

At the time of writing, the S&P 500 index is at 2,625. That’s down 8.6% from its recent peak on 26th January. It’s a similar story across stock markets globally, including Europe, Japan and Emerging Markets.

A fall of less than 10% is not a crash. Especially when stocks are back to the same level they were as recently as mid-December. There was a fast run up and now there’s been a pull back. In the case of the US market, the bubble inflated even more, and now some air has escaped.

Of course, given the elevated prices of many stocks, they could fall much further. That would be terrible news or excellent news, depending on your perspective.

If you have high exposure to stocks with bubbly valuations, and little in the way of cash “ammo”, then it could get painful.

But if you only own a modest allocation to stocks (or stock indices), and those that you own are already sensibly priced (meaning downright cheap, or at least reasonably priced in relation to underlying value), then you have little to worry about. Especially if you have plenty of cash to deploy.

In that instance, what you already own will still do well in the end, just with a slight delay (typically a year or two). And a market crash will provide an excellent opportunity to scoop up some bargains, and make big profits in a market recovery. But that time is has not yet come.

That said, something of note happened recently. Assets that are usually mainstream safe havens during a stock market correction also fell. Most obvious amongst those are US treasury bonds (green line above) and the US dollar itself.

The following chart shows the US dollar broad index in the year to end of January 2018. This shows the relative value of the dollar against a trade-weighted index of 26 other currencies of both developed and developing countries. A look at the right hand side of the line shows that the fall accelerated during January. Looking at the major currency pairs such as euros, British pounds, Japanese yen and Swiss francs, there has only been modest respite in the first part of February.

Even gold took a dip, although it’s held up much better than stocks or bonds.

Why’s everything falling at once?

So why has everything wobbled at once?

The most obvious explanation – especially for stocks and bonds – is simply that the conditions were ripe. A great many stock prices are bubbly – especially in the US. And bond yields are still far too low, although less so in the US than many European countries or Japan.

Specifically, real yields – after stripping out expected inflation – were pathetic (or even deeply negative, such as in the UK gilt market).

In which case, what’s triggered the sudden concerns and sell offs? It seems to be a sudden realisation that inflation has picked up. That’s even though the evidence has been around for a while, with rising commodity prices being one area of note.

For example, the price of WTI crude oil was under US$30 per barrel at the start of 2016, but now trades over US$60. That’s a doubling in little over two years. And yes – we still use a lot of it, and global demand continues to grow.

The US tax bill could also be inflationary, since it’s likely to be a stimulus to both corporate investment and consumer spending – at least in the short run.

If inflation is back, the concern is that central banks will have to raise rates faster than previously expected, in order to keep a lid on rising consumer prices. Policy lending rates could rise from their (still) ludicrously low levels.

On top of that, central banks (eurozone, Japan, UK) could put the brakes on quantitative easing (QE) – the creation of money to buy bonds (mostly) and suppress bond yields. Or the US Federal Reserve could accelerate the offloading of treasury holdings that it built up in the past.

The implication for bond markets could be a sudden surge in available supply of securities, from central bank sales and new issues. Higher yields (lower prices) would likely result. Real yields – the gap between nominal yields and inflation – could rise further, which could weigh on gold (although the long term investment case remains intact: see here for my gold articles).

And then there are stocks.

The biggest issue with stocks is that a great many companies carry high levels of debt these days. Ultra low rates in recent years have led to a borrowing binge, often to fund unproductive activities such as stock buybacks at inflated prices.

If interest rates go up, so will borrowing costs. This will:

At the same time, many consumers have high debts. If their interest costs go up, their disposal incomes will go down. Many companies could see pressure on top line sales, putting further pressure on profits.

I don’t actually expect inflation to go crazy, although it could pick up a little. But nowhere near the levels of the country where I live, Argentina, where it’s still running above 20% a year (although down from 40-50% a couple of years ago).

Even if inflation isn’t about to surge into double digits, or even high single digits, there’s another factor at play. This is the simple realisation that rates and yields, of all kinds, actually have to revert to a sensible level in relation to inflation one day – and that day may come sooner than previously expected. This is enough to unsettle the wide array of overpriced financial assets in both stock and bond markets.

Maybe this wobble will pass, and all will be forgotten in a couple of months’ time. Or maybe stocks are about to endure a long overdue crash. After all, the last one got underway over a decade ago. Tick tock. Tick tock.

In the meantime, I’m sticking to my cautious recommended portfolio allocation, which I last updated in August 2017. Here’s a summary: 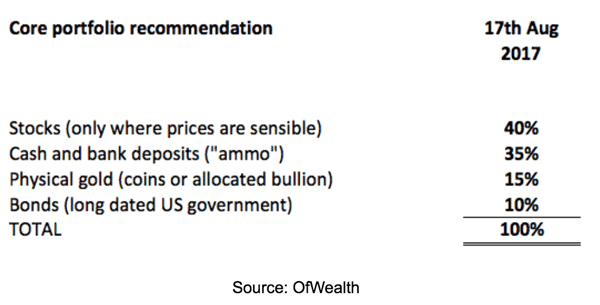 By the way, if (and it remains an “if”) stocks really do crash then I’d expect US treasury bonds to swiftly reverse their recent correlation with stocks. The safe haven value will come back into force, yields will fall again – for a time – and prices will rise.

So I’m keeping the small 10% allocation to long-dated treasuries in the recommended portfolio. In fact, if yields keep rising, I may even increase it a little, and reduce the cash piece.

However, for now the recommendation remains the same.

This is not a time to panic, provided you’re taking a relatively low risk and diversified approach, such as my recommended portfolio. Nor is it yet time to deploy that cash into stocks in a big way. That would be premature.

Markets can do anything in the short term. Recently they’ve had a wobble, and we don’t know what happens next. It could be back to business as usual or something more dramatic.

Either way, successful investors need to take a longer term view. They must balance the quest for profit with the management of risk. My recommendation is to remain calm, be patient, and stay cautious for the time being.