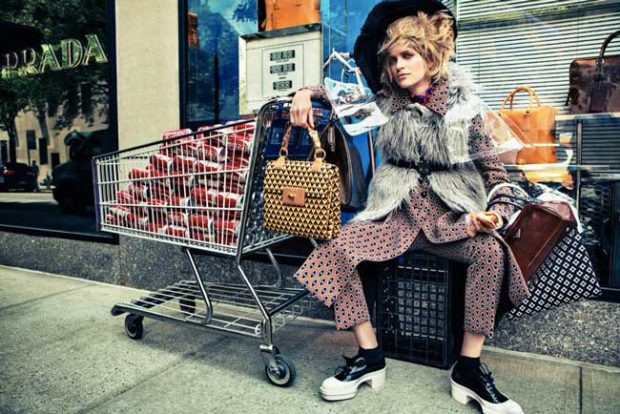 This week a used handbag was sold at auction in Hong Kong for the equivalent of US$222,000. Apparently, these days, some people will pay the price of a house to adorn a female arm with a second hand leather sack. But most of those that indulge in a life of pointless consumption and instant gratification will end up like a different kind of bag lady. Impoverished and living hand to mouth. Fortunately it’s not too hard to prevent that happening.

Admittedly the handbag in question is both diamond and brand encrusted. It’s something called a Birkin bag, made by Hermes. Apparently there is a great demand for these sacks of stitched skin from the world’s well-to-do ladies (or perhaps that should be “nothing-better-to-do” ladies).

This particular one is a “fuchsia, diamond-encrusted crocodile skin bag”. Oh, and it’s got a pair of useful accoutrements called “handles”. Apparently they help to suspend the item when passed over the lower part of a lady’s upper limb. With such cutting edge technology clearly this is no ordinary bag, and well worth the substantial price paid.

Some poor, empty soul has decided that this pricey, portable, pink pouch of power was essential to enrich their existence. Unfortunately the crocodile that donated its skin didn’t get a say in the matter (or a commission, unlike the auction house).

Before I go on, let me make one thing clear. People should be able to choose what they do with their own money. If they want to alleviate the drudgery of their dull lives with the fleeting pleasure afforded by consumable status symbols then good luck to them.

But that way lies the poor house. Even large fortunes can be destroyed in a short period of time by excessive consumption. Just think of all the high flying and richly paid celebrities sports stars that end up on the scrap heap.

Former Manchester United football star George Best memorably summed up this malaise: “I spent a lot of money on booze, birds [women] and fast cars. The rest I just squandered.” He earned a fortune and frittered it away on high living.

Many people – rich or not, men and women alike – are prone to living beyond their means. They save too little, or even worse spend more than they earn.

As our lives, and therefore retirements, become longer and longer this will leave a great many in poverty during old age. (See here for the specific challenge facing women.)

I’m not saying we all need to be misers, counting our pennies in a cold room lit by candles. Our lives are for living and enjoying. But a balance needs to be struck between instant and distant gratification. If we want to ensure a comfortable retirement, or that we have substantial money to pass on to our children, we need to forego certain pleasures today.

And it shouldn’t be that hard for most people to achieve. In fact we need to spend just a little less now to save a lot more for the future. If that sounds like a contradiction then here’s an example to explain.

Now let’s say the person decides to cut spending and save more for retirement.  US$2,500 of cost cutting is found, meaning spending drops to US$42,500 a year and saving rises to US$7,500.

By doing this, spending is down 5.6% but saving is up 50%. A modest cut in current spending has resulted in a massive increase in savings for the future.

Now I’m not saying it’s easy for everyone to cut spending. But I bet most people could if they tried. When it comes down to it, almost all of us are spending money on things we don’t really need or use. And that’s even for those of us like myself that aren’t interested in the latest technology gadgets, the hottest new fashions….or fancy handbags.

In the past I’ve taken a close look at my outgoings and made big savings quite easily. And I’m not talking about scrimping and saving on everyday essentials like food and drinks. Everyone should eat well unless they have no choice.

I live well but I don’t waste much money on unnecessary things. Or at least where I do “waste” money I do it consciously on things that I enjoy, and I keep it within reason.

The biggest savings came from insurance premiums (car, contents, health). About eight years ago I realised I was over insured in a number of areas, and also not getting the best deals on the market.

It can be really boring doing this kind of analysis and the phone calls and paperwork involved in switching providers. But by changing just two or three insurance contracts I ended up saving about US$5,000 a year, so it was well worth it. Instead of wasting thousands on faceless insurance conglomerates I was now keeping that money to myself. That’s a great feeling.

Over the 30 years or so between then and retirement age that’s US$150,000 that I won’t have wasted on insurance companies. That’s a great return on a couple of days of my time.

Housing costs can add up too. Making sure you’re getting the best mortgage deal…buying an adequate family home instead of a sprawling mansion…renting a slightly more affordable place: all of these could save you thousands every year. In my case I saved thousands each year by switching my mortgage provider.

There are plenty of other things you can do to save costs – too many to list here. It’s just a matter being organised and putting in a bit of time and effort.

Getting started means first of all working out where you spend your money. Once you know the big ticket items you then work out if you can reduce them. Trust me: you could be surprised how much you are spending without having to.

Plus spending less money isn’t necessarily about living less well, but it is about living more intelligently. The thousands that can be saved from cutting back on insurance premiums and mortgage interest doesn’t affect your standard of living. It’s just about cutting out waste.

All the thousands of dollars saved goes into your savings and investments instead of the pockets of big companies. In my book that’s a pretty big incentive to find the time to make some changes.

There will always be plenty of people that want to buy tastelessly conspicuous handbags and other consumer items. And I wish them well. After all, someone has to keep the economy going. But, for my part at least, I’d much rather have a sack full of cash than a snazzy satchel.

Which would you prefer?