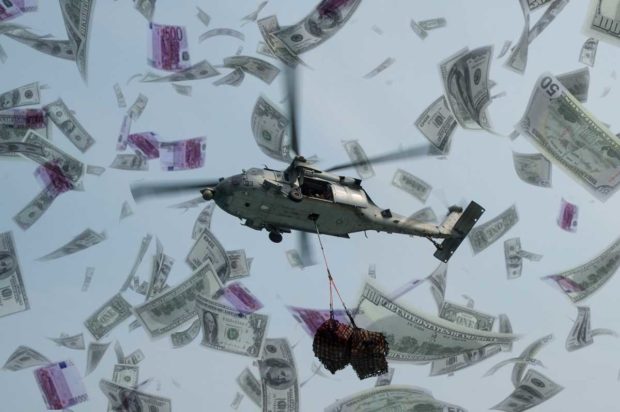 Money is the oil in the economic machine. Without it all the gears would get jammed up. Most of the time, most money is created out of thin air by commercial banks. In recent years central banks have been creating vast amounts of new money too. Unfortunately it turns out to be the “wrong kind” of money to help the economy. With commercial banks unable to lend as as fast as before, “helicopter money” handouts seem inevitable, sooner or later.

This week I’m looking at the little understood question of money. Understanding it, and the implications of our current situation, is essential for savers and investors that want to protect themselves.

Part I explained how commercial banks create money out of thin air. Every time they make a loan a new deposit of the same amount is created. This is how most new money is injected into the economy.

For reasons I’ll explain, commercial banks can’t create money as fast as in the past. This has major implications for future economic growth, making new money – or rather the lack of it – the “missing link” that prevents any bright economic future. Government policy makers will not be happy.

Of course, central banks create money as well. In recent years they’ve created trillions of dollars of new money out of thin air, through a process known as “quantitative easing” (QE). But it turns out that QE money is the “wrong kind” to boost the economy.

More on that in a minute. First let’s look at why the normal money creators, the commercial banks, now have one hand tied behind their backs (or perhaps both).

During the 2007 to 2009 global financial crisis lots of big western banks went bust, or were on the brink. Unsurprisingly, governments, regulators and bank management teams desperately want to avoid a repeat performance. So banking regulations were changed to reduce the chance of this happening again.

Many things were done, but the most important was a tightening up of bank capital rules. This is about how much equity and other high quality capital the banks have to have in relation to their total assets.

The specific rules of how minimum capital levels are calculated are highly complex. But put simply, if a bank could previously have assets that were, say, 40 times equity capital, nowadays that figure would be substantially lower, say 20 times.

For example, I took a look at the balance sheets of three big banks at the end of 2005, before the crisis, and 2015. Then I compared them. These were US bank Citigroup, UK bank Lloyds Banking Group and Spanish bank BBVA. On average their leverage was 1.85 times higher in 2005 than in 2015.

Of course that still leaves them highly leveraged, as the following illustration shows. But for the same level of assets, a bank today might have around twice as much equity capital. 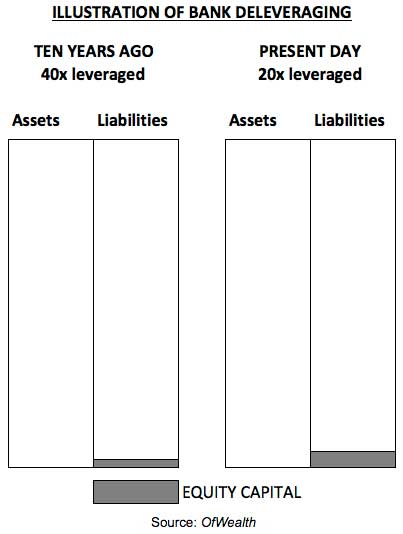 Banks are unusual businesses as they are forced to have minimum levels of capital by the regulations. In simple terms, if they want to grow their business they first have to grow their income generating assets. But to be allowed to grow their assets they must also grow their equity capital.

This has huge implications for how much money they can create through new lending, which in turn affects the economy.

Now let’s say they make exactly the same net profit after tax of $5,000, because their asset income and liability costs are the same (and operating costs and taxes).

Let’s also say that both banks pay out half their profits to shareholders in the form of dividends, which you’d expect in a mature business. So profit is $5,000 and dividends are $2,500. That leaves $2,500 of retained profit – money kept behind – in both cases.

That retained profit is added to capital, which allows the business to grow by expanding its income generating assets. Remember, because of strict government regulations, banks must have new capital to expand.

But with Bank B things aren’t so good. It has the same retained profit but twice as much capital base to start with. So it can only increase its equity capital by 5% ($2,500 divided by $50,000), which also means slower profit growth. 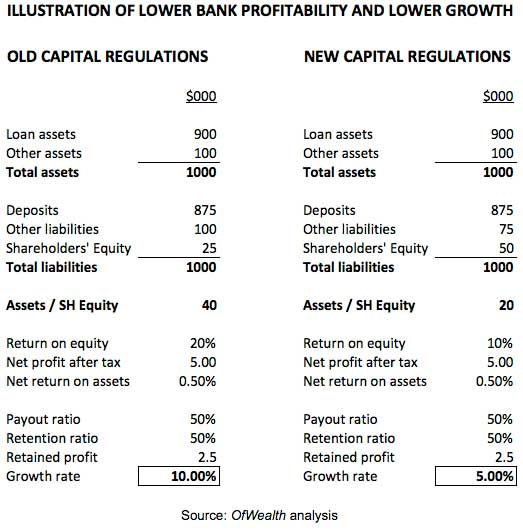 In other words, the stricter and stricter new capital rules brought in over recent years mean banks can’t grow their assets as fast as before. The banks have been made much safer, but they can’t create new loans as quickly. (Lower RoE and slower profit growth also has big implications for bank share prices, but that’s another issue.)

Without lots of new loans there are fewer new deposits, meaning the amount of new money in the economy must grow at a slower rate.

Making the banks safer has come at a big cost: much slower economic growth. Even worse than that, because policy makers and economic advisors don’t factor these issues into their models the policy responses are incorrect, or even make things worse.

That’s not working? Print money to buy bonds (QE) and drive bond yields down, or even into negative territory!

(Over US$13 trillion of developed country government bonds now have negative yields, and even the positive yields are pathetically low.)

Still not working? Charge commercial banks for depositing money at the central bank, via negative interest rates, and make them even less profitable!

I’ve explained in Part I how commercial banks create most of the money, most of the time. They make new loans which create new deposits. And now you know how the capital regulations ensure that the total volume of money is kept in check, by placing a limit on bank assets.

In recent years there have been other players active in the creation of deposit money: the central banks. The US Federal Reserve, Bank of England, European Central Bank and Bank of Japan have all created – or are still creating, or will start creating again – trillions of dollars of brand new money out of thin air.

This is where you start to realise why QE money is the “wrong kind”, at least if it’s supposed to help the real economy. Most of the fund managers and others that receive QE money just invest it into something else – more bonds or stocks. It’s not like a pension fund or insurance company is going to cash out and go on a spending spree at the shopping mall.

So QE money mostly ends up trapped inside the securities markets. It may bid up asset prices in the market, but it doesn’t release money into the real economy. (For a better understanding of this and how market prices are set see “Horse, dances and market prices”.)

Back in the “real world”, commercial banks can’t grow their lending as fast as before. This puts credit dependent economies on a slower growth path. That means less demand for goods and services and, in turn, less investment in new production.

In other words, lower credit supply leads to lower credit demand. No matter how low interest rates go, the root constraint on banks won’t change. But nonetheless those policymakers keep on trying.

Already there are reports of companies and fund managers hoarding cash in Switzerland, and ordinary people buying more and more safes in Japan and Germany to stash their physical bills. This creates a funding problem for banks, as more and more electronic deposits (loans to the bank) are converted into paper money.

Negative rates create this immediate problem, unless physical cash is restricted. For example, by phasing out large notes, like the US$100 bill. Kenneth Rogoff, an establishment professor at Harvard University, recently wrote in the Wall Street Journal about “The Sinister Side of Cash”.

In there he argued that “Large notes…facilitate crime: racketeering, extortion, money laundering, drug and human trafficking, the corruption of public officials, not to mention terrorism.”

Never mind that they’re useful to everyone else. Or that you could say the same sort of stuff about loads of other things. Cars, planes, trains, computers and guns, for example.

The authorities want, or may want in future, negative interest rates on bank deposits so they can double up on their failing policies.

This is typical of the establishment scaremongering that is being used to argue against paper money. But the real motivation is completely different. The authorities want, or may want in future, negative interest rates on bank deposits so they can double up on their failing policies.

If there’s no escape from the banking system, as offered by physical cash, then they think they can keep you trapped in it. Then they can slowly confiscate your money over time.

I personally think that it’s unlikely they’ll be successful in either their stated aims, or with their hidden agenda (see here for more). But that won’t stop them trying for a while longer.

However, in the end, the authorities will realise that QE and negative interest rates aren’t helping the economy. That’s even if they don’t understand why.

And so, when all else fails, they’ll turn to “helicopter money”. Meaning they’ll just print money to spend in the real economy, reducing its purchasing power, but buying a few votes in the process.

Whether that means handing money directly to the government to spend on whatever it wants to waste it on, or handing it directly to ordinary folks to waste it as they so choose, remains to be seen. But at this rate, one or both kind of handout seems inevitable as governments and central bankers get more and more desperate. The result will be higher consumer price inflation.

What should you do in the meantime to protect yourself from these threats? Start by spending less and saving harder – as a protest if nothing else. Then buy gold as a hedge against the final inflationary end game of “helicopter money”.