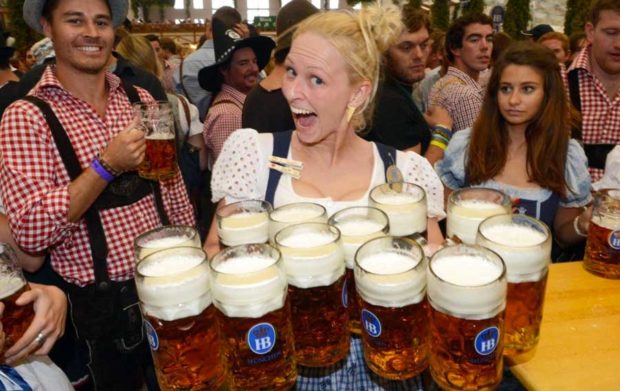 Everyone should own some physical gold. In a “good” world – with vast, fast growing, gold-hungry emerging markets like India and China – consumer demand will drive up the price. In a “bad” world – of bursting asset bubbles, financial crises or war – gold is insurance (without the annoying fine print). Today I look at a few ways that gold markets have changed in the last decade.

Long time readers will know that private demand for gold is huge in China and India. My view is that the demand in those two countries can only get larger as their economies grow rapidly (with the usual cycles), and new private wealth is created. Put bluntly: wealthy people buy more gold jewellery than poor people…because they can.

It’s pretty well known among gold investors that the USA banned private gold ownership between 1935 and 1974. What’s far less well known – at least in the “West” – is that China did the same between 1950, shortly after the communist revolution, and 2004.

It’s no coincidence that gold’s huge price rise since the early 2000s has coincided with China’s massive economic growth, and re-entry into the gold market.

Here’s a quick brush up on another little historical footnote. In May 1999, 19 years after gold’s 1980 bubble, the UK Chancellor of the Exchequer (finance minister), Gordon Brown, stupidly pre-announced a plan to sell the UK’s gold reserves.

All the professional gold traders – London being the centre of the gold trade – said “thank you”, and got ahead of the government by selling gold short. The eventual price floor of US$252 per ounce was reached in July 1999, a moment that became known in the markets as the “Brown bottom”.

Eighteen years later gold trades at US$1,291 per ounce, or more than five times the price. That’s equivalent to a compound return of about 9.5% a year. Not bad for an investment that pays no yield.

Incidentally, even including dividends, the S&P 500 index of US stocks has only returned about 6% a year since July 1999. What was everyone buying in July 1999, in the middle of the tech bubble? Stocks. What was everyone not buying? Gold. That’s an abject lesson in how the market mob can, and regularly does, get it badly wrong.

For more background on gold, I encourage you to read the following:

At the same time, gold investment has become easier than ever.

There are now a number of services that allow ordinary people to have cheap access to gold bullion, stored at a low cost in vaults around the world. The other major change is the introduction of gold-backed exchange traded funds (ETFs) and similar gold investment products.

Before these two innovations, most individual investors were limited to coins – which are expensive to trade – and stocks of gold mining companies – which come with additional risks.

The following chart shows how the amount of gold held by ETFs has gone from virtually nothing before late 2004 to around 2,300 tonnes today. 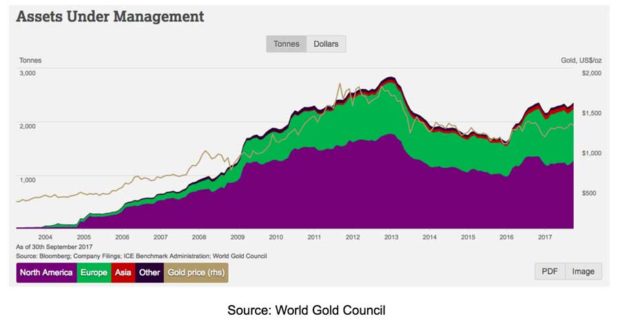 Of course, a lot of ETF money is speculative. Not least because ETFs are often used by professional punters, such as hedge funds. Those sorts of outfits can have a very short term approach to investing.

It’s no surprise that the big reduction in ETF gold tonnes in 2013 and 2014 coincided with a sharp drop in the gold price. As the price started to fall, more and more money was pulled and the fall was made more pronounced.

No coincidence either that the gold price hit a low at the end of 2015, which is also when ETF gold tonnes hit a low. Since then the ETF holdings have gone back up, and so has the gold price. Here’s a chart of the global ETF investor flows by year, again measured in tonnes.

Back in the late 1990s or early 2000s, if you suggested an investment in gold then people gave you a funny look. The investment mantra was that gold was pointless as an investment, since it didn’t pay a yield. (That was Gordon Brown’s thinking too.) Why own gold if you could own US treasury bonds that yielded 5%?

Even the quintessential guardians of wealth, Swiss private bankers, have changed their tune these days. It’s common to hear a gnomic institution from Geneva or Zurich advocating a 5% allocation to gold. Some even go as far as 10%.

That said, a decade after the worst financial crisis in history got underway, most people I know don’t seem to own gold. Or, if they do, it’s in very small quantities. But evidence suggests that investors in at least one important developed country have really taken gold into their hearts, and their portfolios.

A decade ago, the Germans hardly gave gold a second thought, at least as an investment. Now they buy loads of the stuff. The World Gold Council was right to say in a recent report that the German investment market for gold has undergone a “radical transformation”.

This is clear in the following chart, which shows German demand for coins, bars and “ETCs”, meaning “exchange-traded commodities” (basically, gold ETFs and one or two other things).

German investment demand has gone from virtually nothing to something very substantial. Mined global gold production is only around 3,000 tonnes a year. So when one single country suddenly wants an extra 100 to 200 tonnes a year it’s a big deal. If ten countries did at the same time…

Just looking at demand per person for bars and coins, it’s clear the Germans have developed quite a taste for gold. On average, they buy twice as much as the Americans or Chinese. 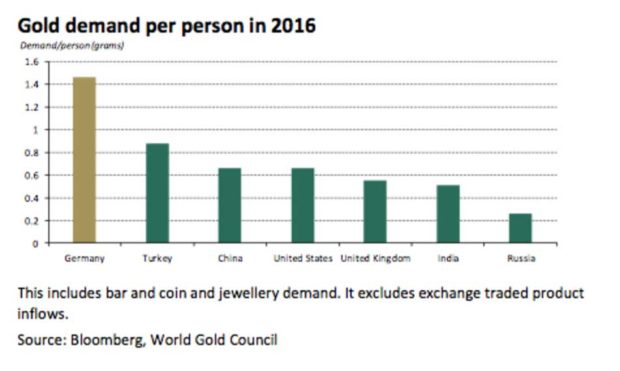 What’s more, according to results of a recent survey published by the World Gold Council, a staggering 22% of German investors have invested in gold over the past 12 months. It’s an even higher 27% for high income investors, as shown in this table: 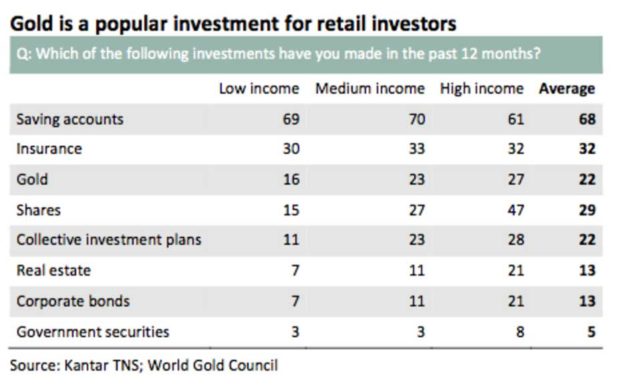 Of course bond yields are ultra low in Germany, or even negative, especially real (after-inflation) yields. A two year “bund” – German government bond – yields -0.71% (that’s minus)…a ten year bund yields just 0.44%…even a 30 year bund yields only 1.27%. This is when German consumer price inflation (CPI) is running at 1.8% a year.

(Germans have the European Central Bank’s rabid quantitative easing, which is money printing to buy bonds, to thank for this sorry state of affairs…)

That said, there may be other factors in play (please send any ideas you have). I’ll just note that Germans now seem to love gold as an investment, whereas a decade ago they ignored it. Sensible people.

When a bear is a bull

There’s one other big buyer that I happen to have noticed recently. Or, rather, I’ve been reminded of it. This is the Russian bear.

Yes, the Russian central bank has been busily accumulating gold for years now. The black line on the following chart, which shows millions of ounces, makes that clear. 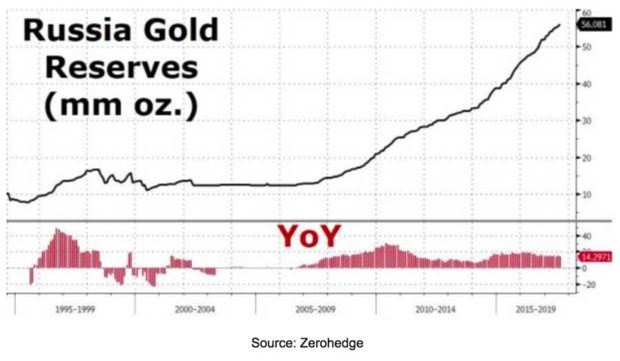 Since 2006, the volume of Russia’s gold reserves are up by a factor of about four and a half. Almost 1,400 tonnes have been added to the stockpile. In other words, it’s not something linked to recent events. But the buying did accelerate after the global financial crisis, and is a big change from ten years ago.

Russia isn’t alone in this, either. China has added around 1,000 tonnes to its reserves over a similar time frame. That’s on top of the huge private demand for gold coming out of China.

There are other sources of new gold demand in the world, such as the waves of new buyers from high growth emerging markets. But I hope I’ve raised your awareness of three of the major new gold buyers that weren’t present a decade ago. Those being global ETF owners, German investors, and the Russian (and Chinese) central banks.

OfWealth recommends a 15% allocation to gold within your financial investment portfolio. That’s both for its long term profit potential and its defensive qualities in times of crisis. If you want to find out more about the best ways to buy gold, then you’ll find a recent article I wrote on the subject here.