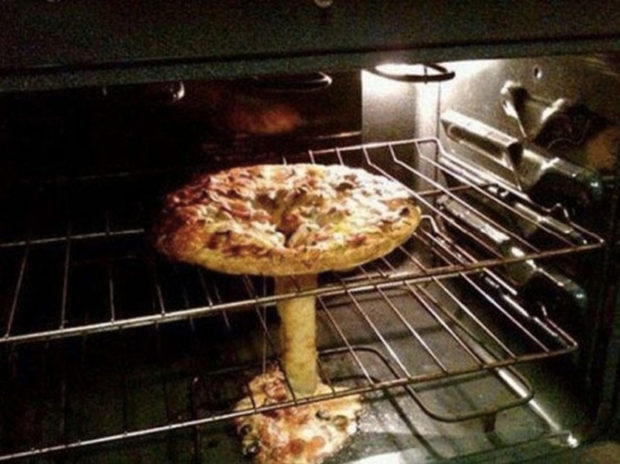 There are pockets of distress in the world economy and financial system. The UK’s recent vote to leave the EU has brought them into sharper relief. Today we delve into the immediate signs of problems in Europe and the US. The question is, will they spread and is it time to panic?

In the aftermath of the “Brexit” vote, British politicians – both within the government and the main opposition party – continue to slug it out with each other. But it’s not just in Britain that the effects are being felt, or where there are signs of renewed financial uncertainty.

The rest of Europe has plenty of problems of its own. Right now, the state of Italian banks is the big one. The industry has needed a bailout for some time. This is no small matter, given that Italy is the world’s 8th largest economy, just ahead of Brazil and Canada.

But bad debts are also on the rise in the US, which is a leading indicator of a US recession…Greek stocks are plumbing new lows…British real estate funds are starting to prevent investor withdrawals…there are serious doubts about the largest German bank…

I’ll deal with each in turn, but let’s look at Britain first. Bank of England governor Mark Carney – the UK’s equivalent of the chair of the US Federal Reserve, Janet Yellen – has moved to relax capital requirements at British banks.

A small relaxation of the capital rules will allow British banks to lend an additional £150 billion (US$197 billion) to businesses and households.

A small relaxation of the capital rules will allow British banks to lend an additional £150 billion (US$197 billion) to businesses and households. To put that into perspective, net new lending in the UK was £60 billion last year (US$79 billion).

It’s the usual story. When your credit soaked economy looks like it’s drowning, tip another bucket of credit over its head. It’s financial waterboarding for the already tortured developed world. The trouble is, you can make available as much credit as you like, but it’s no use if no one wants to borrow.

One specific area of concern in Britain is the market for commercial real estate (CRE), an area than many feel could struggle outside the European Union. Faced with sudden investor redemptions, three large British CRE funds have already moved to prevent further withdrawals. Standard Life’s £2.9 billion (US$3.8 billion), Aviva’s £1.8 billion (US$2.4 billion) and M&G’s £4.4 billion (US$5.8 billion) CRE funds have suspended trading in recent days. There are around 50 such funds in total, and more temporary trading suspensions seem likely to follow.

It’s a reminder that these funds operate with deeply flawed structures. They are “open-ended”, meaning investor money is flowing in and out all the time. But the assets they own – large buildings like office blocks, logistics centres, factories – are highly illiquid.

It takes a lot of time to buy or sell a massive building. So when investors demand a lot of their money back, the fund quickly runs out of cash while it tries to offload assets. This can cause a vicious circle of firesales: funds try to sell buildings quickly…market prices for property are dragged lower…more investors try to pull out…and more firesales take place. This is the stuff that crashes are made of.

The problem with these structures – trying to offer liquidity to investors while owning illiquid assets – was something that became apparent during the last financial crisis. It appears that lessons haven’t been learnt by either fund managers or investors.

At the other end of Europe, Greek stocks are being hammered again and are closing in on their February lows. I’ve long warned about the risk of investing in Greek stocks, despite the massive previous price falls and them looking cheap on some measures (for example, see here). Greece is a bankrupt country with a depression economy.

In fact I’ve been pretty negative about the prospects for Europe (see here), the “PIGS” as a group (see here), and Italian stocks too (see here and here). So far all these calls have turned out to be prudent.

Focusing on Italy, a country of 60 million people, it has plenty of problems. The IMF predicts tepid economic growth of just 1.1% this year. Unemployment is 11.5%, and government debt is an already high 133% of GDP.

Total bad and doubtful debts in Italy amount to some 360 billion euros (US$390 billion), which is 17% of total Italian bank loans and 22% of GDP. The following chart shows the rising trend in recent years (note: it only includes “bad” debt, which is already defaulted, and not “doubtful” debt, which merely looks suspicious). 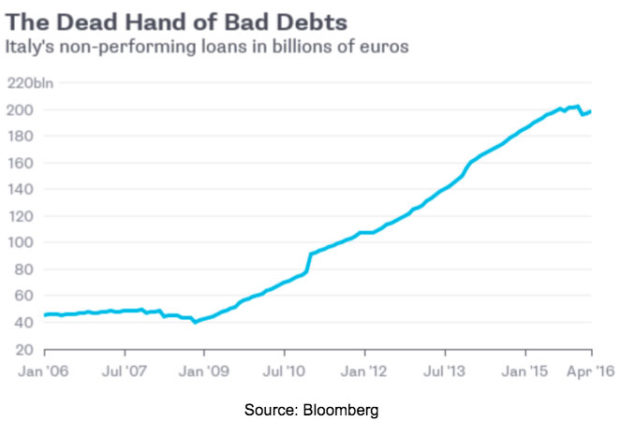 This has been going on for years, and is not a result of Brexit. That dodgy debt has already been written down to 44% of the original loan amount, meaning banks have taken big losses. However, many believe that the recoverable amount is much less, and there’s a further 40 billion euros of writedowns to come.

Hence, the Italian government wants to bail out the banks with an injection of 40 billion euros of new capital, using public funds (presumably borrowed). It seized on the Brexit news as an excuse to get this done quickly.

But EU rules introduced in 2014 say that state aid is not allowed until shareholders, bondholders and uninsured depositors have taken the loss. So the state funded bailout has been blocked by the EU authorities, for now.

The problem back in Italy is that small Italian investors – ordinary people – own 187 billion euros of bank bonds, and no Italian government wants to make them eat a fat loss. Obviously, it would be political suicide.

One day soon, either Italy will ignore the EU’s rules, or the EU will bend them (in its best traditions….). In the meantime the standoff continues, and confidence in Italian banks continues to evaporate.

Fearing a bank run, the Italians have recently announced a 150 billion euro liquidity backstop. In other words, if depositors yank out their funds the central bank will lend to the banks to fill the gap, and keep funds flowing to the economy. But that doesn’t solve the bad debt problem, or the need for new bank capital.

Meanwhile Germany’s biggest bank, Deutsche Bank, has seen its stock price implode, down 60% in the past year. This is important too. In a recent review of the soundness of the German financial sector, the IMF concluded that “Deutsche Bank appears to be the most important net contributor to systemic risks”. Translation: if Deutsche goes down, so does the German (and global) banking system.

Deutsche has a lot of low return and capital intensive trading businesses in its investment bank. Management says it doesn’t need to raise new capital to meet regulatory requirements. The market is saying otherwise. Its market capitalisation (value in the stock market) is now less than Snapchat, a relatively new social network.

What about in the US? Last week the Federal Reserve announced results of its Comprehensive Capital Analysis Review. It concluded that almost all US banks were sound. Almost immediately, 31 of the largest US banks announced big stock buyback programmes and/or dividend increases. Bank stocks rose.

But could this be premature? Deutsche Bank’s own analysts now reckon there is a 60% probability of a US recession within the next 12 months. And US bad debts are increasing as well, as shown by the sharply rising line of delinquent commercial and industrial loans and leases in the following chart.

Overall it’s not time to panic. Clearly there are some red flags flying, marking out new pockets of distress. But overall the financial system in Europe and the US is in much better shape than 2007. New regulations have forced big banks to reduce leverage by a massive amount, and hence riskiness.

That said, there are no guarantees. As ever it pays to remain diversified – not just in your choice of investments, but also where you park your savings and investments. Having all your funds at just one bank or broker is never a good idea.

If you want to remind yourself of the basics – which always helps me to maintain a clear head – have another read of Five things every investor must do.