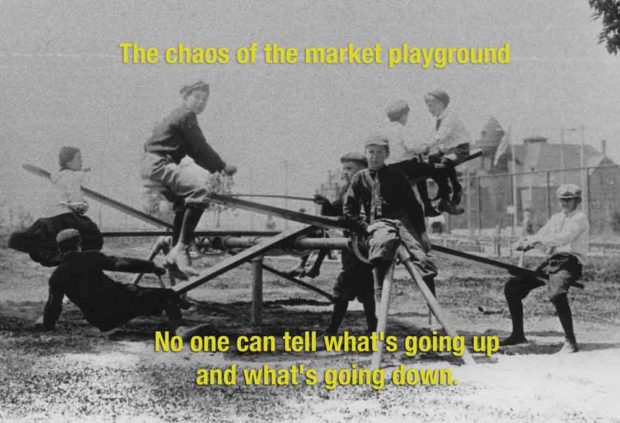 Last week I was in London, catching up with a lot of contacts in the financial world. Over seemingly endless coffees, lunches, drinks and dinners I heard opinions on all sorts of things: stocks, bonds, emerging markets, gold, the dollar, politics – you name it. Only one thing came through, and it came through progressively more clearly. No one knows what’s going on or what to expect as we enter the fourth quarter. In other words, it’s time to play it safe.

Before my trip I encouraged you to do nothing, as we wait and see what “crash season” has in store for us. None of recent meetings with traders, fund managers, investment bankers, journalists, brokers, economists and financial analysts has changed my mind.

The US Federal Reserve, having indicated that rates would start to rise modestly, has put off the reckoning day and left rates on hold. Now people are left to ponder, for even longer, how long it will take until that day arrives. Yet others say it won’t arrive for the foreseeable future. On the contrary, more money printing could be around the corner.

China is either a great bargain or about to go bang, depending on who you talk to. Emerging market stocks as a whole look cheap, but there’s a lot of worry that corporate debt levels are too high (I’m currently researching that and will let you know what I find out).

Oil could go down or up. Analysts at Goldman Sachs, an investment bank, recently said they expect the price to fall as low as US$20 a barrel. This ultra-bearish call reminded me of their ultra-bullish mid-2008 call for $200 oil.

They got it very wrong that time. Instead of rising, the oil price rapidly fell from a peak of $145 a barrel in July 2008 to $30 a barrel by December of that year.

So people wonder whether Goldmans have got it wrong again, or whether oil really could go that low. Perhaps they are just talking oil down to make a profit from their own bets? Or perhaps they know something that we don’t?

Then there is the question of US stocks. Most people acknowledge that they are still expensive, as OfWealth has frequently pointed out. But if rates don’t rise, and more QE is a possibility, then could we see a bounce instead of a crash?

The bull argument is essentially that with sentiment already so weak – and certainly there is little interest from retail investors, who are usually last to the party – that the market should rise.

The bear argument is our one: even if there is a short term bounce, US stocks are so expensive that they are unlikely to give a decent profit in the medium to long term, so it’s best to stay away.

How about gold?  Either going to do well because rates rises have been postponed, making the dollar relatively less attractive. Or it’s going to fall because deflation – or at least very weak inflation – is here to stay. That makes it less important to have an inflation hedge such as gold.

On to the US dollar. I heard arguments for why the dollar will keep going up, and also for why it’s going to start heading down. The “uppers” point to it being a safe haven in a world of turmoil. The “downers” point to the delay in rate rises, since recent gains were already baked in a September hike.

The only consistent theme that came out of my many discussions, and much reading that I’ve done since, is that there’s no consistency of views. Of course that’s always the case, but at the moment there seems to be even more muddle and confusion than usual. The big problem is that there is so much intervention and manipulation by central banks and governments that more than ever price swings are dependent on the vagaries of policy decisions. At times like this we can expect a lot of price volatility and for anything to happen.

So what’s an investor to do? Here at OfWealth we recommend sticking to what we’ve been saying all along. Play it cautious and stay diversified.

We believe investors should continue to hold a mix of value stocks, cash and gold, with bonds best avoided (see here for more).

By “value” stocks we mean cheap when measured on fundamentals. These could be individual stocks or diversified funds, such as country or sector ETFs. But they all have one thing in common: their prices are low in relation to their future earnings power. And at the moment the best value is still to be found in emerging markets (see here for more).

By “cash” we don’t just mean physical notes. A reader – George from California in the USA – recently wrote in to ask about this, so let me briefly explain.

“Cash” in the context of an investment portfolio is any kind of short term money asset. It’s not going to make you a great return in the short run. But it will allow you to ride out storms and give you ammunition to scoop up bargains when there are more around. In other words it gives you the means to make profits later on.

Physical notes are one type of cash, but it’s not practical to hold a lot of money in this form. Unless you like digging holes in the garden in the dead of night. For most people, most of their cash will be in the form of bank deposits.

These could be demand deposits, whether in current or savings accounts, that can be withdrawn at any time. Or they could be term deposits at the bank (or broker), sometimes called fixed rate bonds or certificates of deposit (CDs). These are meant to be kept for a certain period of time, typically ranging from a few months to a few years.

But whatever type of deposit we’re talking about, it’s important to remember that it’s a loan to the bank. That’s why banks pays interest on cash deposits, albeit not much at the moment in this low interest rate world.

One other kind of cash, or cash equivalent, is very short term government bonds, known as treasury bills. These are a loan to the government. They have maturities up to six months, and because the loan is going to be paid back so soon there is very little price volatility.

If you have a lot of cash held within a brokerage account this is an alternative to placing the money on deposit with the broker. But there will be dealing and custody charges to pay as you buy, hold and sell.

We recommend having a lot of cash when it’s hard to find good value in stock markets. But, when there’s plenty of value about, you should have most of your investments in stocks. Unfortunately now is not one of those times, although more opportunities are starting to appear.

In the long run stocks offer the best returns to investors when compared with bonds, cash or commodities. As a group, companies grow over time, and they pay dividends to their shareholders as well. (See the chart at the bottom of this article for more on the long term performance of stocks.)

Obviously cash could lose value relative to other things while you’re holding it. Currencies go up and down, and we don’t know what’s around the corner with consumer price inflation – however strongly held the opinions of many commentators.

But if cash collapses in value then gold will rise relative to that cash. So it’s worth having some gold too, as a short term hedge against currency problems.

Anyway, in the long run, we reckon that gold is likely to be a good investment in its own right due to rising consumer demand in China and India as they become wealthier (see here for more on the link between prosperity and gold purchases). Also the Chinese and Russian governments have been adding gold to their reserves, amongst others.

How much should you have in each of those asset classes of value stocks, cash and gold? That depends on your personal circumstances, so there’s no easy answer. How much investment capital do you have? Are you young or old? Relaxed or tense about short term price swings? Where do you live and what’s your home currency?

So I can’t give a precise recommendation for all OfWealth readers. But given current conditions, and all the uncertainty, I suggest around 30-40% invested in value stocks, 5-20% in gold and the remaining 40-65% in cash. You should continue to play it safe for now.