Do you remember these events?

“July 2014 was a dramatic month. Many Western politicians, aided by tame media outlets, have been trying to re-start the Cold War with Russia. The Israeli military has attacked the densely populated ghetto known as the Gaza strip, with the inevitable loss of many civilian lives. And Argentina has defaulted on its debt (again) – for once not for lack of money or willingness to pay, but because it was forced to by a New York court. The world appears to have gone mad. So it’s business as usual, then, and there’s no need to panic.”

We published this a year ago while the world was going bonkers. Today we’re in a similar situation… but this time in the commodities sector. The media continues to push headlines that incite emotions with little facts to back up claims.

We can’t deny that the commodities sector is heading south. But when things like this happen you’d better prepare yourself for a big move.

In today’s guest essay Karim Rahemtulla, from The Non-Dollar Report, analyzes the situation of the commodities sector. It may be volatile for a while, but here is the case for why it will turn around eventually.

Position yourself for a commodities rebound

The commodity markets are getting crushed… which means they are in the process of creating a classic Warren Buffett-style buying opportunity.

To be sure, the prices of gold, silver or platinum do not look like they are ready for a major reversal. But there will be a bottom and it may occur for no apparent reason. At current prices, gold is getting close to a 50% retracement from the high above $1,900 it achieved in the summer of 2011. That’s a crash!

Precious metals stocks are now as cheap as many have been over the past 15 years. Most other stocks in the resource sector have also tumbled to multiyear lows… and that could spell an opportunity you don’t want to ignore.

Oil stocks kicked off the widespread commodity rout in the fall when the Saudis and OPEC announced their intention to oversupply the market with the hopes of gaining market share.

It worked wonders. Oil prices crashed by more than 50% and many oil producers, the smaller ones, have lost more than 90% of their value. Many of the better ones are “only” down by 50% or so, while the “best of breed” are down around 30%.

Companies like Exxon Mobil (NYSE: XOM), EOG Resources (NYSE: EOG), Chevron (NYSE: CVX) and a host of other financially strong majors are trading below 52-week lows and approaching multiyear lows. Yet some companies in the sector are raising dividends, even as earnings are plummeting.

While surprising on the surface, a look below reveals that many of the majors are indeed making less money, but because of diversified operations such as refining and specialty fuels and chemicals, they are not yet losing money.

What is happening in the energy sector, however, is tame compared to what is happening in the metals and mining sector. Many of the most speculative companies have already gone bankrupt… and others are sure to follow. That’s because many balance sheets in the resource sector dropped below “E” months ago… and are now running on fumes.

For most companies, their cost of production is above the price of the metals they produce. Furthermore, access to capital is almost impossible for the junior miners and may even get to the point where no banker will even want to participate in a further dilutive offering of stock. Can you say “no bid”?

However, this is not the case for the major mining companies. Like the energy majors, the big miners are flush with cash and have shed a ton of high-cost projects in order to preserve their capital and ride out the storm.

But during a panic, investors don’t care what a company’s balance sheet looks like. They sell everything – shooting first and asking questions later. This sort of panic-selling creates Buffett-style opportunities for investors who have an investment outlook that lasts more than a few months.

Today’s washout in the commodity sector feels very similar to the washout in U.S. stocks during 2007 and 2008. That wicked bear market took the S&P 500 down a whopping 57%… and etched the painful memory of large losses into the minds of anyone who owned a stock. But savvy investors who were able to look beyond the panic and capitulation were able to buy on the cheap… and ride beaten-up stocks to huge gains.

Sure, the prices of many commodities may continue falling for a while, but as all seasoned commodity investors know, “the best cure for low prices is low prices.”

While most commodities are acting as if there is no longer any demand, that will take care of itself as supply becomes naturally constrained as the weaker players are pushed out of business.

In other words, as prices fall, lots of resource companies start bleeding red ink. As losses mount, companies do whatever they can to preserve cash. And that usually means they cut production in some way. They shut down high-cost operations and halt exploration. If those efforts fail, they declare bankruptcy and shut down completely. All of these factors produce the identical result: less supply.

Falling supply may not impact prices immediately. But eventually, as supply and demand reunite, prices move higher once again. Throughout the commodity sector, falling prices are causing a drop in supplies. This process is teeing up a great buying opportunity.

In addition to the classic supply-demand factors that could power the next bull market in natural resource investments, the U.S. dollar could also play a key role.

What investors are forgetting is that most commodities are priced in U.S. dollars and a good part of the recent crash in commodity prices, especially in the precious metals, is due to the inverse correlation to the dollar, which has been on a tear for the past couple of years.

The chart below tells the story. Over time, commodity prices tend to move in an opposite direction from the U.S. dollar. So commodities rise when the dollar falls, but they fall when the dollar rises. And that’s what has been happening during the last few years. 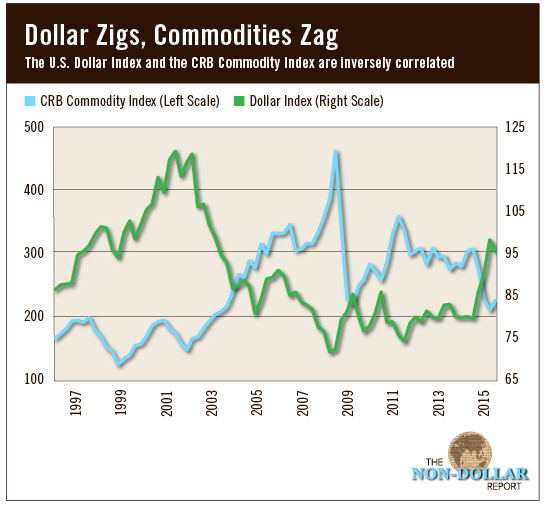 As for your own personal portfolio, therefore, it may be time to take a page out of Buffett’s playbook and begin to scout out some pockets of opportunity during this panic in the natural resource sector. The best of breed is where your focus should be. Why not? When great companies are priced as if they are going out of business, what is the point of looking at second-tier companies?

There may be no urgency to buy right now, as prices are still trending lower. But just as we have seen during other rebounds or reversals, there is no one ringing a bell at the top or the bottom. Buy the best companies and buy in increments over time. When this commodity crash finally ends, you’ll be happy you did.

P.S. If you enjoyed today’s issue, please check out The Non-Dollar Report to find similar insights from Karim Rahemtulla.