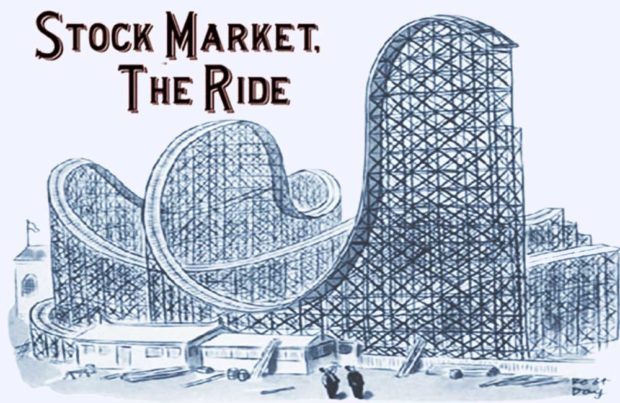 Despite what most people believe, big market price swings are great news for private investors. Stock market volatility is the gift that keeps on giving. But if you’re going to take advantage of it then there are essential “do’s” and “don’ts”. If you follow my five guidelines you’ll be sure to profit.

Earlier in the week I started to explain why market volatility is not something to fear. Crucially, this is something unique to private investors, as opposed to most other groups active in the markets. (For further explanation see “Why you should love wild price swings”.)

Unfortunately, almost everyone will tell you the opposite. That’s because they’re thinking about what volatility means for those other groups, and not for you. Or they’re trying to drum up more business with some fancy sounding theories. Or they’re simply framing their questions incorrectly and therefore drawing false conclusions.

I’ve seen plenty of academic studies that claim to “prove” that price volatility is a “bad thing”. What the finance professors typically do is to put stocks into groups based on past history, from least volatile to most volatile.

The accepted conclusion: “Volatile stocks are bad because they underperform.” But this is missing the point.

What these studies really show is that bad companies usually have volatile stocks. By bad companies I mean those with high debts, poor or criminal managers, unstable revenues, unproven products, high cash burn, and so on.

But that’s not the same as saying that because a stock price is volatile then the underlying company must be bad. Even the best companies – or stock indices – have temporary setbacks from time to time, which can send their prices plummeting. Those are buying opportunities, not reasons to run for the hills.

The crucial point here is that price volatility is not bad in and of itself. It’s the quality of the underlying business (or businesses) that matters.

And when that happens, and prices plummet, it’s time for savvy buyers to pounce on the “gift” that the market has handed them. Then they just have to ride the recovery, which will happen sooner or later.

It’s time for a real life example. The Russian stock market is notorious for it’s price volatility but has been a highly profitable place to invest.

If you’d invested in the MSCI Russia index at the end of 1994, when it was launched, you’d have made more money in the intervening years than someone that bought the MSCI USA index.

Yes that’s right. Hated Russian stocks have beaten loved American ones. And that’s measuring both in US dollars. Here’s a chart which shows what happened. 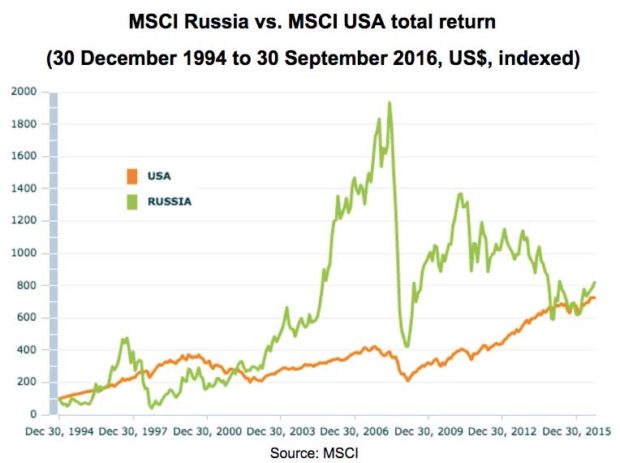 Obviously, with just one glance at the chart, you can see that Russian stocks were hugely volatile. But they still outperformed the USA over time, and most of the time were well ahead.

How so? It’s pretty simple. Russian company profits – specifically earnings per share (EPS) measured in dollars – have grown much faster than US EPS since 1994.

The Russian economy has dragged itself out of the post-Soviet meltdown and powered ahead (even if it’s in recession this year). Of course I wouldn’t go as far as to say that all Russian companies are “good”, but then neither are all US or European ones. But you can think of Russia over the past two decades as a giant turnaround story – and one that’s ongoing.

As Russian EPS has grown, and the value of companies has increased, in turn the stock prices have been dragged higher. This is despite much investor scepticism and the fact that Russian P/Es are still currently depressed. The index is up 33% year-to-date, but still has a P/E of just 7.3 (and offers the prospect of a 7% dividend yield next year).

And this outperformance of Russian stocks was just for the buy-and-hold investor. Such a person, admittedly, would have needed huge amounts of strength of purpose to stick with it. There were major crashes in 1998 and 2008 when prices fell around 90%.

But those crashes were gifts from the market, when Russian stocks became ultra-cheap. People who had the courage to buy in shortly after the crashes made a fortune as the market rebounded in the following years.

Price volatility was an excellent thing for them. Huge profit served up on a platter as others panicked, and not the risk that so many suppose.

Big price swings can be great news for you too – or at least something that you shouldn’t fear. But to make sure they’re working in your favour there are some things that you absolutely must concern yourself with. So I’ve put together five guidelines to help you.

First, don’t overpay. For example, the S&P 500 index of US stocks is now so expensive, and EPS growth is so weak, that low single digit returns are the most an investor should expect in coming years.

In fact something much worse is likely, if P/Es return to sensible levels. To make a decent return in line with long term historical results – of say 9% a year – I estimate the S&P 500 would have to fall by two thirds!

Which brings me onto point two: seizing opportunities when they’re on sale. That means when the market price is low and offers the prospect of big future profits – in the form of a fat dividend yield, EPS growth and increasing P/E. For more see “Turbocharge your stock profits”.

On to point three, and selling when prospects for future profit are poor: see my earlier comments on point one about the S&P 500.

Then there are genuine value impairments to watch out for, my point four.

When you make an investment the prospects for a company can look great, and the stock price can look highly attractive. But sometimes good companies go genuinely bad. This can be there own fault or just due to a change in circumstances.

Investment banks were taking too much risk, with too much leverage, in 2006. When the financial crisis hit during 2007 to 2009 they found themselves bankrupt and had to issue huge amounts of stock just to stay alive. Pre-2007 investors – assuming they never sold – are still nursing huge losses. They could wait for decades and never recover them. This was the banks’ fault.

On the other hand, sometimes circumstances just change – meaning something that’s out of the hands of management. If you ran a business providing coal to steam ships you’d probably have enjoyed a boom in the first part of the 20th century. But then your business would have died as coal-fired ships were replaced with new ones powered with fuel oil.

A more recent, and faster moving, example comes from the world of tech gadgets – specifically mobile phones. Do you remember the Blackberry phone, that wondrous device that first gave us remote access to emails?

It was a hot product for a few years, until Apple invented the better iPhone and others piled into the market too. Blackberry couldn’t keep up. It’s products became obsolete and sales collapsed.

Blackberry’s stock chart tells the story – and reminds us that the tech sector is the graveyard of many past stock darlings. Supposedly “good” technology companies can quickly turn bad. Even the shiny Apple may rot one day.

Finally you need to be patient and see it through. Set your strategy, carefully select your investments, stay calm and stick with it.

If you’re holding good investments that haven’t been value impaired then don’t sell just because the market price falls (actually, most of the time you should buy more if this happens).

If you follow these five guidelines (and I strongly recommend you do), and if you’re an investor with a long term investment horizon (also highly recommended), price swings are not something you should fear.

On the contrary, they’re something to take advantage of. You’ll make a lot more profit as a result.