US stocks have been more expensive only twice in their long history. For a few months in 1929, just before the famous Wall Street Crash. And during the infamous technology bubble that peaked in the year 2000. US stocks have been expensive for some time now. But there’s clear evidence that they’re now entering a bubble. As we roll into 2017, investors will need a lot of luck for this to end well.

One of the most reliable measures of stock valuations, in terms of predicting telling investors whether to stay invested, is the cyclically adjusted price-to-earnings ratio (CAPE). It’s also known as the Shiller P/E or the P/E10.

To get the CAPE, first you take the last 10 years of earnings per share. Then you adjust each year upwards for consumer price inflation during the intervening years, and take an average of the 10 numbers.

The idea is to smooth out business and profit cycles to come up with something that represents average earnings power in today’s money. You then divide that average EPS into the stock price to get the CAPE. It’s just like the P/E, but smoothing out the short term bumps.

Just like any valuation ratio, the CAPE isn’t perfect. But it’s one of the most reliable predictors of future returns. The higher it is, the lower that future investor profits are likely to be, and vice versa.

Today’s CAPE has only been surpassed on two occasions. Just before the 1929 Wall Street Crash, and during the late ‘90s technology bubble that peaked in year 2000…followed by a massive market crash. Those are hardly good omens. 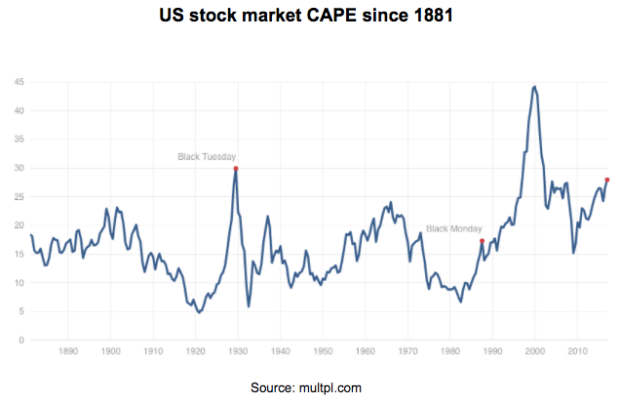 This also means the CAPE is even higher now than it was before the global financial crisis, when it reached 27.28 in December 2006. That was when credit was free and easy and everything seemed to be booming. It was followed by a crash.

Let’s look at this a slightly different way. We can take all the monthly CAPE readings going back to 1881, which is 1,632 measurements. Then we can rank them from smallest to largest to see where the market currently stands relative to its own history.

Put simply the CAPE has only been higher 4% of the time in the past 136 years. Clearly, US stock investors are feeling lucky.

What’s going on is even more stark when viewed in a chart.

Not only can you see how far to the right – the high levels – that US stocks are today. Look at how the line turns almost vertical from that point, the highest 4% of the values.

Those were the true bubbles of 1929 and between 1997 and 2001. US stocks have just moved into that zone. They have officially entered bubble territory.

Of course there’s a lot of excitement about president-elect Donald Trump’s economic policies. Principally his plans to cut corporate taxes and spend a lot on infrastructure. I wrote about the potential pros and cons of this for US stocks just after he was elected (see here).

The S&P 500 has certainly seen a post Trump bounce. But it’s priced for perfect delivery by both the administration (rule setters) and the corporations (result getters).

I estimate that if Trump slashes US corporation tax to 15% then US corporations could see a net profit boost of up to 18%. That’s assuming average tax rates fall from 29% to around 16% (don’t forget US corporations will still have to pay higher tax rates on their overseas earnings).

That would still leave US stocks with an adjusted CAPE of 23.7, placing it at the 88th percentile of historical levels. Which is to say, having only been more expensive 12% of the time since 1881.

In any case the boost is likely to be less. There are headwinds in the form of rising interest costs (US corporations are highly leveraged), and loss of special tax deductions under the current system.

But something like 10% to 15% boost could be achievable (and I stress “could”). Or perhaps there will be no net boost to profits at all. Only time will tell. Either way, US stocks get left in the highly expensive range.

Which is bizarre, given the terrible job that managers of US corporations are doing for their investors.

As I exposed in October “America Inc. is destroying value on a massive scale”. Once you strip out increases in the P/E ratio – which can’t go on indefinitely – and take a closer look at the financial engineering designed to line managers’ pockets, you realise investors are actually getting a raw deal. (See also: “The S&P 500 is being looted by management.”)

Recently I’ve refined that analysis from October. I’ve split out the drivers of historical investor returns into three periods:

The results are summarised in this chart (unique to OfWealth) and the table below it:

[Note: I could only find data for gross stock issuance for the last 10 years, the right hand bars in the chart. In all the others it’s buried within the underlying real EPS growth figure (light blue). If I didn’t break it out then underlying real EPS growth for the 2006 to 2015 period would be negative 2.87% (instead of, for example, positive 0.9% in the 1980 to 2005 period).]

What can we see from this, especially in the last decade? Here’s a summary:

This is a very poor state of affairs. And I think it’s no coincidence that dreadful business results have coincided with an explosion in financial engineering and other chicanery.

For example, stock buybacks were a rarity before the early 1980s. Nowadays corporations are falling over themselves to waste company cash buying overpriced stocks in the market (which destroys value).

Valuation multiples are already extremely high, and can’t keep climbing for ever. Underlying real EPS growth – how much the business is growing above inflation, before all the financial tricks – is pathetic.

Note that the real EPS figures are similar for the five years after 2010, coming in at just 0.23% a year (versus 0.13% for the 10 years from 2006). That was well after the worst of the global financial crisis had passed, and also after much of the post-crisis cost cutting (jobs cuts etc.).

Put this all together and US stocks have bubble valuations despite a very poor business track record over the past decade. It’s a pretty deadly combination. For any of this to make sense, Donald Trump is going to have to deliver more than his wildest dreams.

Of course the bubble could just get bigger for a time. But chasing bubbles and trying to choose the right moment to get out, before the crash, is a fool’s errand.

Only time will tell where this market goes, but the chances of a favourable outcome are slim. With US stocks trading at bubble levels, and priced for perfection, investors had better have a lot of luck on their side in 2017 and beyond. I’m staying away.