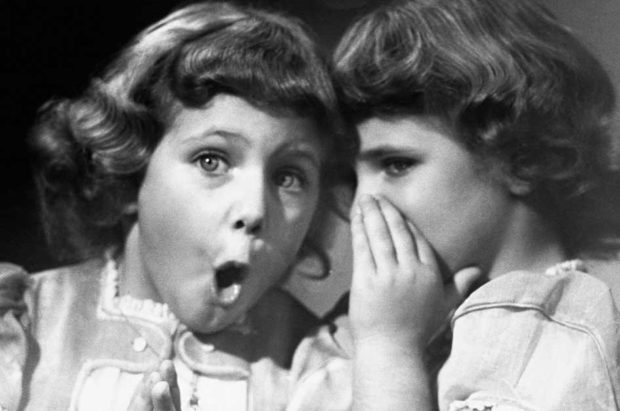 What makes a stock worth a certain amount? Did you know that most of the value of a stock derives from decades into the future? Yet prices often swing wildly – up or down – driven by short term company results and fickle investor sentiment. Playing these factors off against each other significantly improves your chance of making a healthy profit from stocks.

I’m going to show you how most of the value of stocks derives from things that will happen far into the future. The idea is to explain this chart: 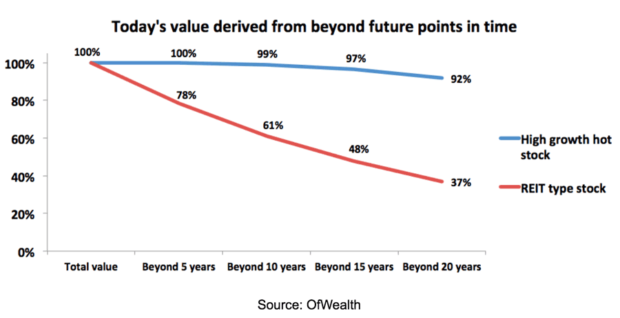 Whereas underlying stock values may rest on long term outcomes, stock prices are a different beast. Stock markets are short-termist in nature, or at least a lot of the participants are. Prices are often far too exuberant, and at other times lurking in a sea of depression.

This spells opportunity for the savvy investor. Understanding that markets are short-termist, but stock values are rooted in long-term prospects, it becomes easier to spot the best times to buy and sell.

I’m not talking about being able to time markets perfectly. That’s impossible.

In some instances, such as high-growth “hot” stocks – the current “flavour of the month” – as much as 90% of the supposed value comes from some hoped-for situation more than two decades into an uncertain future.

Something like Tesla Inc. (NASDAQ:TSLA) is a prime example of this kind. Tesla stock is ludicrously overpriced in my view, even assuming the company achieves perfect operational results over the coming decade or more (see “Why Tesla Inc. stock is clearly overpriced”).

In fact, it’s even doubtful whether Tesla can remain solvent for long enough to become a high volume car manufacturer. The stock is down 7% since I wrote about in June last year. But loads of investors clearly still have faith the company achieving extremely optimistic long term results.

Only time will tell. But if there is any value in Tesla stock then it lives in a distant land.

Getting a return on this kind of stock, starting out with eye-watering valuation multiples today, usually requires the best of all possible worlds. Which makes these stocks much higher risk than most.

Even really steady and low risk stocks – like, say, solid real estate investment trusts (REITs) – most likely derive around 40% of their value from a time beyond 20 years away. The same can even be said about the value of your house.

So let me explain why.

If I offered you a $100 bill, how much would you pay me for it today, and how much should I agree to accept?

Obviously, unless we were both under the influence of some kind of mind-altering substances, the answer is $100.

What if I wanted to borrow $100 today but pay you back in one year? How much interest should you charge me?

Assuming your alternative was to make a bank deposit at 3%, and that you trusted me to pay you back, it would be reasonable to ask for your $100 back, plus $3 interest.

Investing in securities, whether they’re stocks or bonds, is just a more complicated version of the above transactions. You pay out money now in return for more money in future.

The amount you get back needs to be enough to make up for the risk you’re taking and the time taken. Since stocks are usually considered riskier than cash deposits (or most bonds), you should want a higher return.

(Actually, in a sense cash is riskier, at least over the long run. A stock index should making a real, above-inflation, after tax return of about 3% a year. That will add 80% to your money’s buying power over 20 years. The interest on cash deposits will struggle to match inflation, especially after income taxes have been levied.)

Let’s say, instead of making a loan, you invest $100 in my company. Because the risks are higher, I promise to buy you out again for $109 in a year from now. That means you’ll make a 9% return, which you decide is acceptable. A future promise of $109 is worth $100 today.

Things get more complex over two years. I’ll use a simple fixed-coupon bond, with two year maturity, to illustrate this.

In this case, let’s say you want a 3% return on your money. At the end of both year 1 and year 2 the bond will pay you $3 of interest. Also at the end of year two, you’ll get back the principal amount of $100. How do you value these multi-year payments?

Converted from a percentage to a whole number that’s 0.943. This is known, in finance lingo, as a discount factor. Discount factors are bread and butter tools of stock analysts.

To finish the 2 year bond example, on top of the $3 due in two years, there’s also $100 of principal that will get paid back when the bond matures.

Here’s a summary (I’ve shown the two cash payments due in year 2 separately): 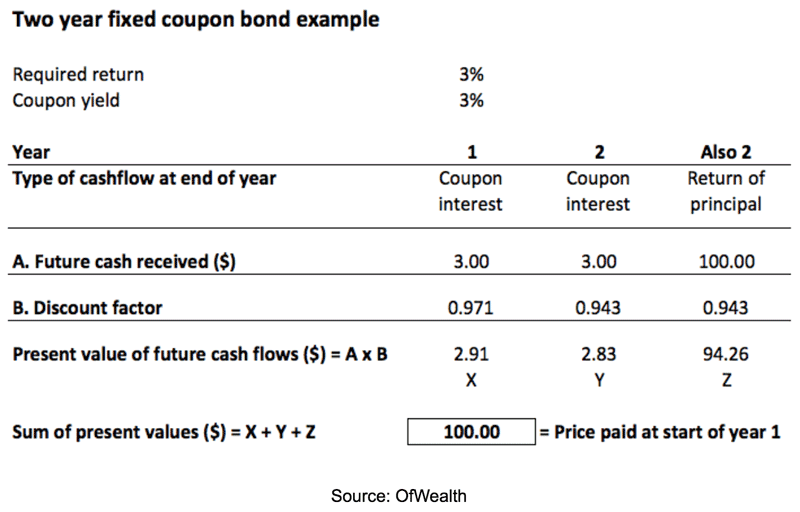 It turns out that if you add up today’s value of the three future cash receipts, it comes to $100. This is what the two year bond that pays $3 in annual coupons is worth, assuming you (the investor) is happy with a 3% return. A total of $106 received over two years is worth $100 today.

I know this may all sound complicated, but what I’ve just taken you through is the basics of something that’s at the core of all investment: discounted cash flow (DCF) analysis.

Every security – whether a bond of a stock – is worth the sum of the values of all future cash payments to the investor. Bonds have coupons, stocks have dividends.

Stocks are more complicated. The coupons are replaced with dividends, paid now or at some point in the future. And the expectation is that those dividends will continue to be paid forever.

At the same time, those dividends are expected to grow over time, as company profits grow. That growth is worth something too, and adds to the value.

Whether it’s a stock or a bond, the expected future cash payments must be expressed in terms of today’s money to get a valuation. Each payment is discounted using the rate of return that the investor wants to get, and according to how many years into the future he’ll have to wait to get it.

Hence these kinds of discounted cash flow (DCF) valuations bring together the three essential elements of all investing:

I appreciate that this all sounds highly technical. But it has some really interesting implications for all investors, especially in stock markets.

In short, it turns out that loads of the value of all stocks is derived from things that will happen way into the future. In fact, for some stocks 90% or more of their presumed value rests on everything going right for the next 20 years.

That said, for stocks of more solid companies that figure drops to less than 40%, which means much more value derives from the nearer future.

I’ll explain this in more detail in Part II, the implications, and how investors can use this knowledge to boost their profits.