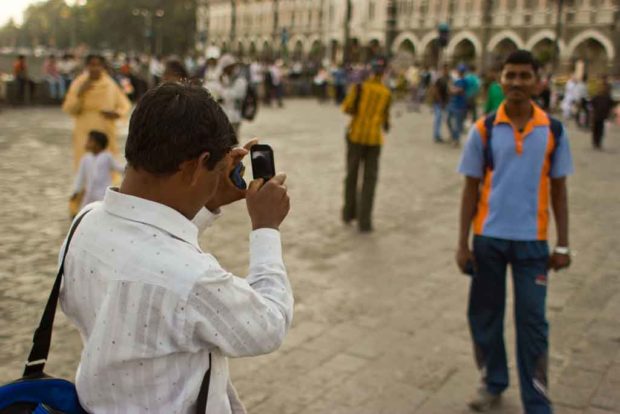 Emerging market stocks had a rough ride in recent years, leaving them trading at relatively cheap levels. Despite this, emerging markets have still beaten the (now expensive) US market over the last 30 years. All investors need to remember the big, underlying trends which mean emerging markets will keep on outperforming in future.

Let’s start with relative market performance. My first chart compares the MSCI Emerging Markets index, which currently includes 23 countries, with the MSCI Europe index (15 developed countries) and the MSCI USA index. I’ve also included the MSCI G7 index, which is made up of Canada, France, Germany, Italy, Japan, the UK and the USA. 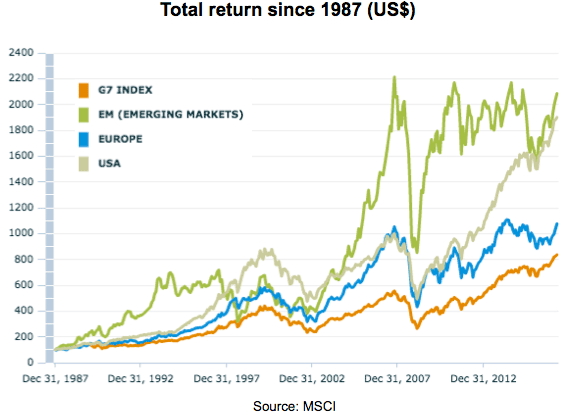 This clearly shows that EMs have beaten DMs over the three decades, which is a long enough run for most tastes. The surprise is that the EM index has even beaten the USA. The reason it’s a surprise is that US stocks are currently so expensive.

At the end of April, and according to the index provider, the MSCI USA index had a price-to-earnings (P/E) ratio of 24.1. That compares with a P/E of 15.2 for the MSCI Emerging Markets index and 22.5 for the MSCI Europe index.

The long run outperformance of EMs – despite the current valuation discount – is explained by one simple thing: faster economic growth.

There are plenty of academic studies that claim there’s no link between GDP growth and stock market performance. But all the ones I’ve seen are flawed for various reasons, or at least have very limited usefulness.

The problem is that big economic trends get overwhelmed by short term market noise, such as changes to valuation ratios like the P/E. But if you look over a long enough time frame the short term effects become less important, and underlying EPS growth becomes more important.

Consider this. If a P/E rises from 10 to 20 that’s a 100% price gain. Spread over five years it’s equivalent to 14.9% compound annual gain (with profits on profits). But spread over 30 years it’s just 2.3% a year. It’s self evident that changes to valuation multiples are less important over very long periods of time.

The main long-term factor in stock price rises is earnings growth and its effect on EPS. It doesn’t take a genius to know that companies operating in faster growing economies tend to have faster growing earnings.

(Obviously there are other things going on that affect EPS, such as capital raises and buybacks. And dividends are an important part of overall returns. But long term, underlying earnings growth is the biggest factor driving EPS overall.)

So much for the last three decades. What about the last 10 years? The next chart compares the iShares MSCI Emerging Markets ETF (NYSE:EEM) with the SPDR S&P 500 ETF (NYSE:SPY) over the past decade.

EMs outperformed the US at first, but have gone sideways since early 2011. In the meantime the US market has gone from strength to strength, bringing it right up to its nicely pricey current condition. (To see just how expensive US stocks are see this link, and to see why corporate tax cuts may not help matters see this link.)

Things have turned around for EM stocks more recently. The next chart shows the same two index-tracking ETFs over the past year. EMs have streaked ahead of the US, despite the Trump bounce.

With that out of the way, it’s time to remind ourselves why this EM outperformance should continue, at least over the long run.

Of course anything could happen in the short run…for example the much anticipated, but still (fairly) elusive, credit crisis in China. EMs aren’t immune to the usual business cycles or financial problems. But they do have some bigger trends underpinning their general direction of travel.

At its most fundamental, the rapid economic growth of EMs in recent decades was caused by steadily increased economic freedom for the people that live in them. Who’d have thought it? Remove people’s leg shackles and they can run faster.

Communism collapsed (e.g. USSR) or is being rapidly diluted (e.g. China, Vietnam). Ex-colonies are finally getting their acts together (e.g. India, parts of Africa). Military dictatorships have been consigned to the past (e.g. much of Latin America). There’s still much to do in many places. But it’s the direction of travel that matters.

Meanwhile capitalism has established a stronger and stronger foothold. The result is improved living standards for vast swathes of humanity. You know, people being able to afford the kinds of everyday things that are taken for granted by the lucky inhabitants of wealthy countries.

This isn’t some kind of miracle. It’s simply the start of a process where these countries move closer to where they should have been in the first place. Old political idiocies held them back. Sweeping those dogmas aside allows vast populations to become better off.

And here’s a reminder of where those people are. Each country in the world is shown according to the size of its population. 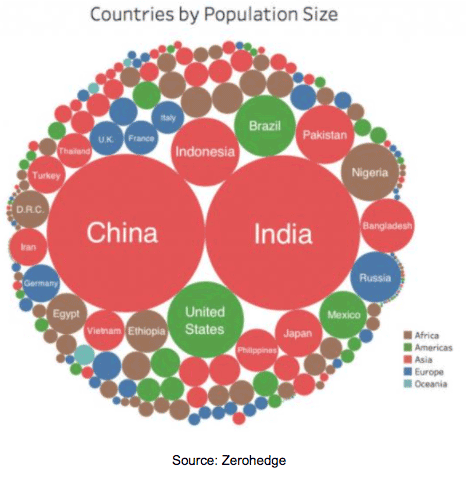 Whereas the next chart shows countries according to the size of their economies, measured in US dollars at market rates. (Note: not at purchasing power parity, or PPP.) 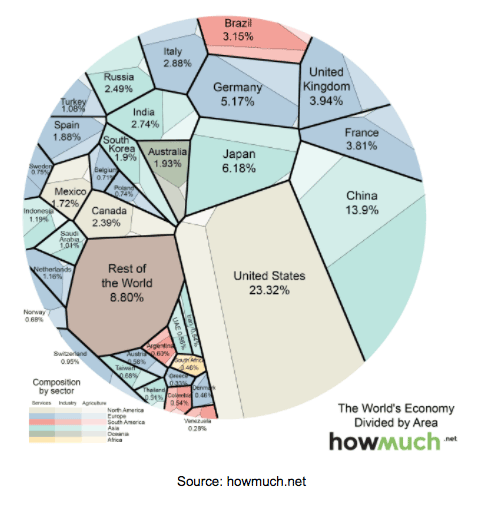 Over time, and in general, it’s reasonable to expect the areas representing each country in these two charts to get closer and closer in size. For example India’s economic share will get much bigger, while Japan, Europe and the US will shrink in relative terms. The general trend is for developed countries to lose economic dominance (and world power), while developing countries gain it.

This may not be news to you, but it pays to remind ourselves from time to time just how fast things are changing. In February this year PwC, the huge accounting and consultancy firm, published a report that imagines how the world economy might look in 2050. Their projections look pretty sensible – barring some major global conflict. 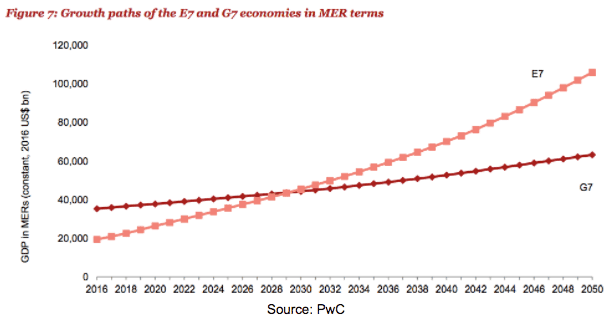 Back in 1992, which is the earliest year of IMF data for post-Soviet Russia, the combined G7 economies were 8.3 times as big as the E7. Now they’re less that twice as big. And, if PwC is remotely correct, the combined E7 economies will overtake the G7 some time around 2030…which is just 13 years away. By 2050 – when my kids will be middle aged – the E7 could be almost twice as large as the G7, which is the opposite of today’s situation.

Technological catch up will drive part of this growth. For example, it’s typical for 85-95% of people in developed countries to have access to the internet. But at the global level only around half of people have access, and it’s much less in many emerging markets.

This next chart shows recent figures for internet penetration in E7 countries. It’s worth noting that the World Bank’s definition of “users” are people that use the internet at least once a year. People with regular and easy internet access – at home, at work, or in internet cafes (remember them?) – are presumably far fewer. 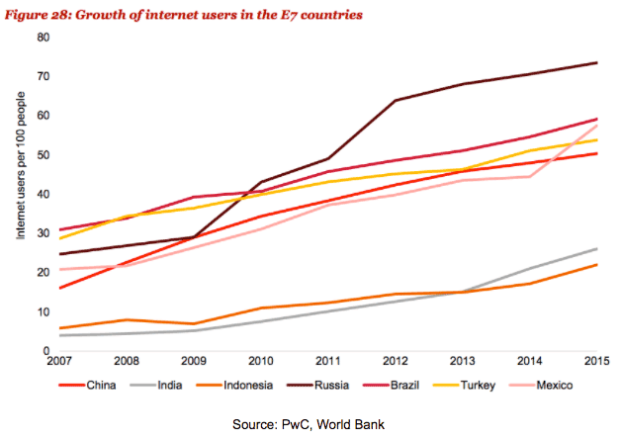 As the internet continues to spread its tentacles it will boost productivity and economic possibilities in all corners of the world. This trend still has a long way to run in emerging markets.

I’ll leave you with the same chart that I started with. Not least because very few people are aware of how well emerging market stocks have performed over the long run. Too many investors get wrapped up in short term market minutiae and miss the big picture.

No one can know what the future will bring. But I’ll happily bet that emerging market stocks will continue to outperform developed country stocks over the long run. Especially given their currently more favourable (low) valuation levels and faster economic growth trajectories.

Of course it pays to be selective. Not all EM country indices are attractively priced, let alone individual stocks. But the big picture clearly favours emerging market stocks over their developed market alternatives. Europe has long term structural and political problems, and the US market is so richly priced that low returns are highly probable. I recommend that you invest accordingly.