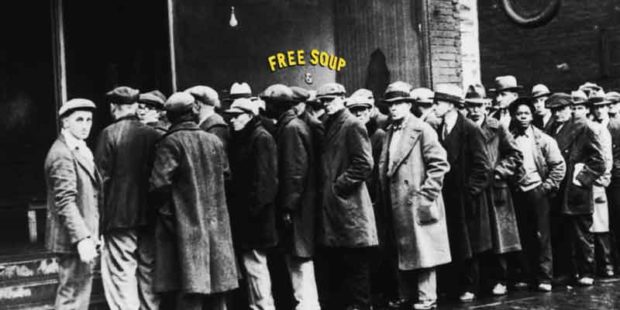 So far this year the S&P 500 index of US stocks has been having a flat kind of time. It’s up just 0.7% at the time of writing. That’s the kind of move we often see in just one day, let alone over a third of a year. US stocks are trading at expensive levels, although of course prices could rise further in the short term. But a recent study suggests that over the next seven years this market is likely to be a significant loss maker for investors.

I last wrote about the US stock market on 23rd September last year. Since then the S&P 500 index has risen a further 4.7%, meaning it has edged even further into overvalued territory.

There are many ways to determine whether a stock index is looking pricey or not. One of the most reliable methods is to look at something called the P/E10, also known as the Shiller P/E or CAPE (Cyclically Adjusted P/E).

The P/E10 is similar to a normal price-to-earnings ratio (P/E), except that the “E” is the average inflation-adjusted earnings of the past 10 years. That average is then divided into the current market price to get the P/E10.

The advantage of using the P/E10 is that it smoothes past earnings for the ups and downs of short term business cycles, but expresses them in today’s money. The idea is to give a longer term view about how stock prices today compare with the underlying earnings power of companies. By comparison the ordinary one year P/E is just a snapshot of current stock price compared with current earnings (per share).

For the S&P 500 index there is monthly P/E10 data going back to 1881. The following chart, from Advisor Perspectives, clearly shows that the index was near the top of its historic range at the end of April, with a P/E10 of 26.7. 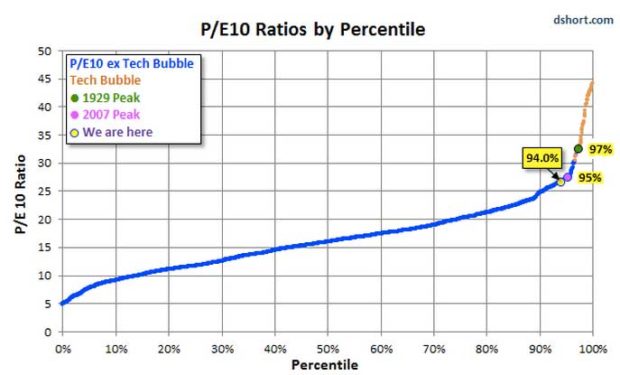 In fact, if we exclude the huge tech bubble that burst in March 2000, then the market is right up in the top 2% of historical outcomes. Put another way, we’re in a 1-in-50 scenario.

The only other time the current level has been surpassed was in 2007, just before the last bust, and in 1929 before the famous Wall Street crash.

This does not bode well for investor profits.

That said, just because something looks richly priced doesn’t mean a price crash in imminent. Prices can keep going up way beyond reasonable levels, and often do.

However, the more richly priced something is today, the more likely that investor profits will be poor in future, especially over the medium term. And so we turn to analysis by Jeremy Grantham at GMO, a Boston-based money manager.

GMO has a pretty solid track record in projecting likely returns from different asset classes over a seven year period. Here is a summary, that uses figures from the Economist, of how GMO’s seven year predictions compared with actual results between 1994 and 2013. (Thanks to Chris Hunter at Bonner & Partners for highlighting this.) 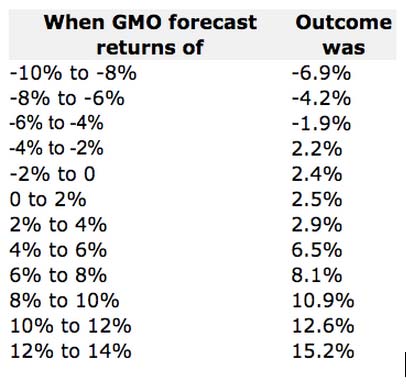 You can see straight away that although the predictions weren’t always exactly spot on they were certainly close. And so we turn to GMO’s predictions from its latest quarterly newsletter. 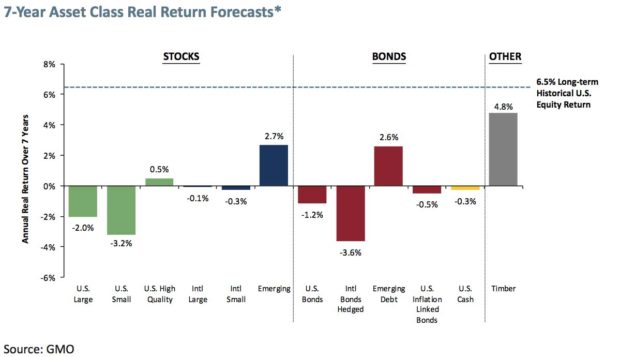 Put simply, GMO is forecasting negative returns for US stocks over the next seven years, and expecting them to be one of the worst performing major asset classes.

Note these are “real” returns, so after taking account of inflation. For total, or “nominal” returns we can add back GMO’s expected inflation of 2.2%.

Large cap US stocks are expected to return -2% a year after inflation (far left bar), and roughly break even before inflation.

In other words, after a big bull market since 2009, Grantham is now forecasting seven years of famine in US stocks.

On the other hand, emerging market stocks are expected to return 2.7% a year after inflation, or 4.9% gross.

That’s consistent with our view that emerging markets are one of the best hunting grounds for investors these days.

In many cases the emerging markets offer much better value, and mostly in economies with faster long term growth trajectories than developed countries.

Even so, you still need to be selective when it comes to emerging markets. There are more bargains in cheap places like China, Russia or Colombia than there are in relatively expensive countries like India or Indonesia, to pick a few examples. (See here, here and here for more.)

In the meantime there’s yet another reason to be sceptical about the short term prospects for US stocks. This is the level of debt being used currently to speculate in US markets. Specifically, US margin debt reached a new record high at the end of March of US$476.4 billion.

(Unfortunately when figures are released by the New York Stock Exchange they are already almost a month old, so March is the latest data point available.)

This level of debt fuelled speculation is 25% higher than the last peak in July 2007, which coincided closely with the last market price peak. It’s also 71% higher than the amount of margin debt in March 2000, when the technology bubble reached bursting point.

But the size of the US stock market has also grown since those earlier peaks. The combined market capitalisation of stocks listed on the New York Stock Exchange (NYSE) and NASDAQ exchange was US$17.5 trillion in March 2000, US$20.5 trillion in July 2007 and US$26.7 trillion at the end of March 2015, using figures from the World Federation of Exchanges.

To get a better idea of how speculative the market is, I like to compare margin debt to market cap, instead of just looking at margin debt in isolation.

Put another way, there’s more speculative margin trading now than at the height of the huge technology bubble, when adjusted for market size. But there’s just a little less than before the last crash got underway in 2007, following a banking and commodities bubble (remember the talk of US$200 oil in mid 2008?).

Either way, that’s a lot of speculative behaviour at the moment. And if the stock market goes into reverse, for whatever reason, those margin debts will have to be repaid fast. This in turn will force leveraged speculators to liquidate positions to raise cash, dragging prices down even further and reinforcing the crash. This old story of excessive debt on the way up will ensure bigger price falls on the way down.

So, whichever way you look at them, US stocks appear unattractive. In the short run there’s a meaningful risk of a crash if leveraged speculators are forced to liquidate positions to pay off record levels of margin debt. And in the longer run there’s a high probability of negative real returns.

Of course there’s nothing to stop US stock prices from first resuming their upwards march. But the higher US stocks go the more reasons there are not to own them.

Here at OfWealth we continue to recommend that you avoid US stocks until they trade at substantially lower levels. For now they look set to deliver seven years of famine, and possibly more.