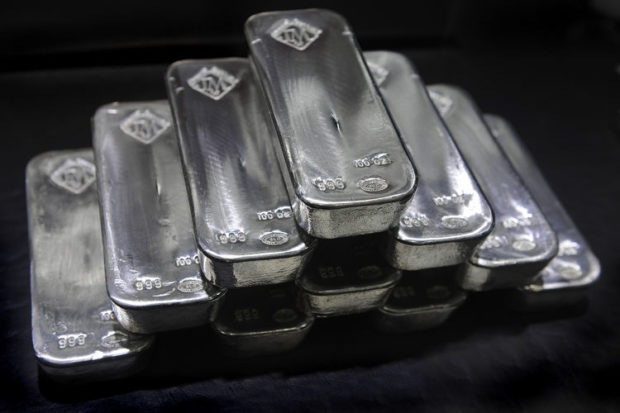 A note from Rob:

Long time readers of OfWealth will know that we recommend that all investors own at least some physical gold. But today, in a special guest essay, our attention is drawn to another of the precious metals – this time silver.

Silver is a very different beast from gold. Unlike gold, its uses are much more biased to the industrial side, such as in electronics, and much less to the jewellery and investment sides.

Silver’s price is also much more volatile than gold, making it more speculative. But it’s currently cheap relative to its more expensive cousin and therefore worth a look. In fact the price is at a level not seen since 2009, shortly after the global financial crisis.

So now I’ll turn things over to our friend Eric Fry at the Free Market Cafe. Enjoy.

In one corner, we have the heavyweight favorite, U.S. stocks. In the opposite corner sits silver, the perennial loser and underdog. Get a ringside seat for this one, folks. You might see a stunning upset. Over the next couple of years we expect to see silver deliver a much better investment performance than U.S. stocks.

To be sure, U.S. stocks have been the World Champion of investments during the last few years. Silver hasn’t even made it out of the ring. As a result, the “smart money” keeps riding on the champ, while only “dumb money” rides on the chump, silver.

In other words, both of these investments have become a “sure bet” – U.S. stocks are sure to win; silver is sure to lose.

But as we never tire of mentioning here at The Non-Dollar Report, whenever investor sentiment becomes extreme – either extremely bullish or extremely bearish – a reversal of fortunes is usually very near.

Perhaps that reversal is already underway… at least for silver. But before entertaining ideas about silver’s glittering future, let’s take a quick peek at its tarnished past…

Silver’s current bear market is its second worst on record. The silver price plummeted 74% from its high near $50 an ounce in April 2011 to its recent low near $14 last December. Even today, silver languishes 65% below its 2011 high. Adding insult to injury, the S&P 500 Index soared 70% over this same four-year span. 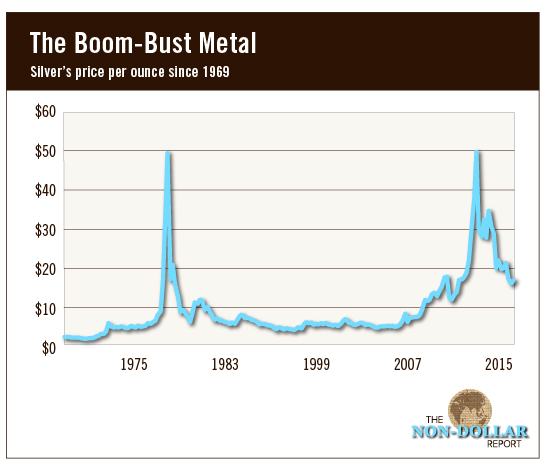 If these percentages sound like just a bunch of numbers, consider this hypothetical scenario.

Given these horrific results for silver, it is no surprise that the formerly precious metal has become utterly friendless. Epitomizing the downbeat sentiment surrounding silver, Andrew Hecht, an independent commodity analyst, recently referred to silver as “a dog with fleas” and predicted that it would resume tumbling soon.

“I believe that we are on the verge of an epic sell-off in silver that will take the price of gold’s little brother down to the $10 level quickly,” he said. “Silver looks like a dog with fleas to me and I have a strong sense that the price action over the coming months will shock many, just as they were shocked by oil over recent months.”

Mr. Hecht is at least half right; silver has been a dog of an investment during the last four years. In fact, the entire precious metals sector has been a litter of mutts.

In 2010-2011, when investors were optimistic about gold and silver, capital flowed into the fund. But now that investors have become pessimistic about the precious metals, capital is draining out of the fund. 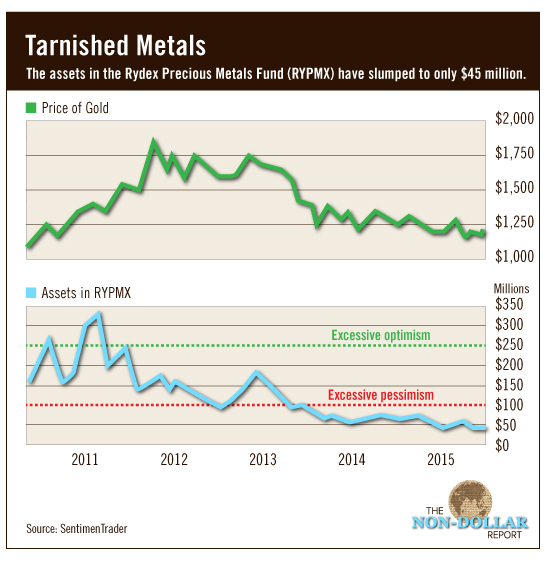 According to classic contrarian investment principles, the greatest buying opportunities present themselves whenever a particular asset falls out of favor. Silver would seem to qualify as an “out of favor” asset. Its investment status has plummeted to a level somewhere between rubbish and toxic waste.

But extreme bearish sentiment is not the only reason to expect silver to crawl out of its lengthy bear market. There is also a compelling supply-demand argument. For years on end, non-photographic demand for silver has been ramping up. But so has the supply of newly mined silver… until now.

The “days of plenty” may be coming to an end.

The mined silver supply is on track to fall this year for the first time in 13 years. Due to the low and falling silver price, almost no one is bringing new mines into production. That’s why the Silver Institute is predicting a “Peak Silver” scenario, in which the mined supply declines over the next few years.

Meanwhile, the Silver Institute expects total silver industrial demand to grow about 5% per year over the next four years.

“Increasingly, applications for silver are being invented, discovered and, importantly, commercialized,” the Institute reports. “The unique properties of silver… make it indispensable in many industrial applications, from watch batteries to industrial-scale solar energy systems… [as well as] for use in printed inks, brazing and alloys, and anti-bacterial applications.”

The photovoltaic market has been an especially significant and growing source of silver demand. “Since 2013,” the Silver Institute continues, “there has been rapid [solar power] development in the Asia-Pacific region with China dominating, along with strong potential for South America and Africa… Looking ahead, the Middle East and North Africa represent huge untapped potential as this technology becomes more affordable, and the Indian government aims for India to become a global leader in solar energy over the next three decades.”

Already, the annual supply of newly mined silver is inadequate to satisfy industrial demand. But above-ground stockpiles have filled the deficit. These hard-to-quantify stockpiles may continue filling the deficit for years to come, but not necessarily at $17 an ounce. As mined supplies drop and industrial demand climbs, silver may become increasingly precious… and expensive. 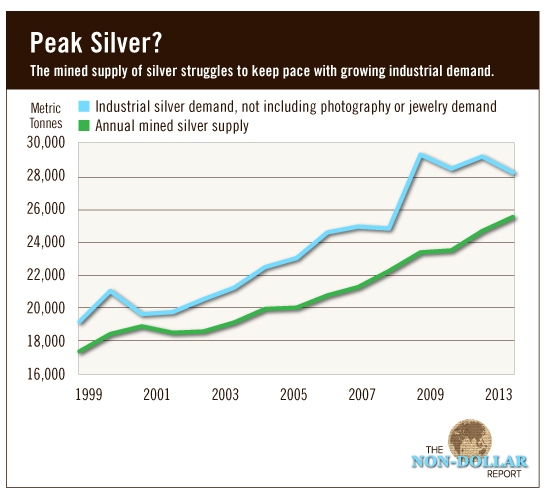 This favorable supply-demand outlook does not automatically mean that silver is a “Buy,” but it does suggest that silver is less of a “Sell,” especially now that its price is 65% below its 2011 peak.

To conclude, let’s indulge in a little game of “What if?”

What if a new bull market in silver is already underway? What if last December’s low near $14 an ounce was the low of this bear market?

How high might the silver price rise during the upcoming bull market? 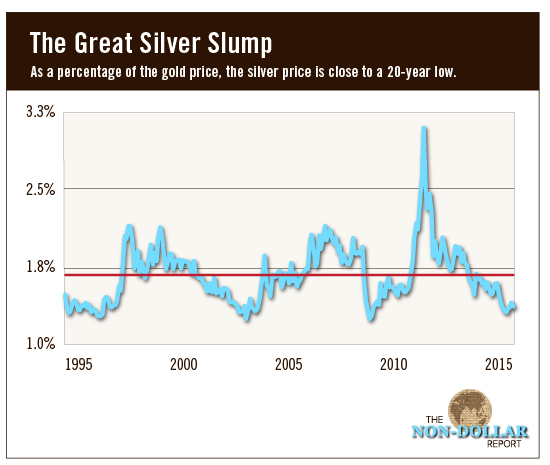 If silver simply rose to its 20-year average, relative to gold, it would be trading at $20.49 – a 16% gain. That’s assuming no gain in gold whatsoever. However, if gold traded back to its record high, and silver traded back to its average ratio, silver would soar to about $32 – a gain of 80%.

But there’s another gold-silver ratio… and it suggests an even higher price target for silver. That’s the geological gold-silver ratio. Geologically speaking, gold is only 18 times more rare than silver. Yet the gold price is 69 times higher than the silver price! So if we were to adjust for geological rarity, silver would be trading at $68 today – or almost four times its current price.

But these are the extremes of investor sentiment that create opportunities – either to buy low or sell high.

Eric Fry
For The Non-Dollar Report

Note from the editor:
As the team at Free Market Cafe puts it, they “strive to ask the questions that produce valuable insights – the kind of insights you won’t gain from the talking heads on prime-time news who already “know the answers.”
CommoditiesLong Term InvestingSilverSpeculation
Previous ArticleMillion dollar bag ladiesNext ArticleDon’t make this classic investment mistake