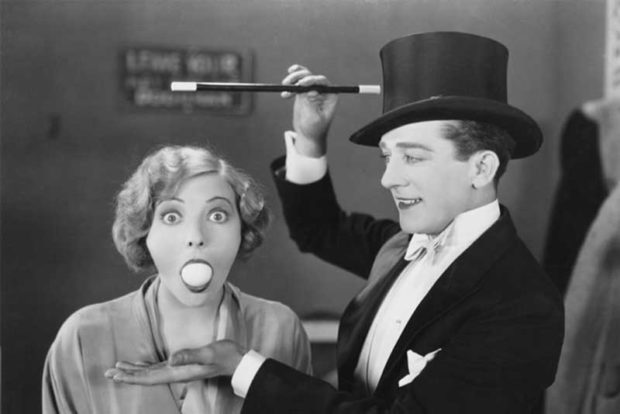 “S&P Hits an All-Time High.” So ran a headline today on Bloomberg. The moment, at 12.54pm, was fleeting – the index hit 2,873.05, a shade above 26th January’s close of 2,782.87. As I write it’s at 2,871.98. Last week I started unpicking whether US stocks are still expensive, even after tax cuts. Today I dig deeper below the headline figures and find evidence that most of the market may, in fact, be trading at a reasonable level.

Another day, another milestone. US stocks continue to grind higher. Last week I posed the question: “Are US stocks still overpriced?” The point being that the US economy looks pretty strong right now. Combined with big cuts to US corporate taxes, could that mean that stock prices are reasonable?

Before getting into details, let’s look at the big picture with…a picture. Below is a chart of the S&P 500 index over the past 30 years. 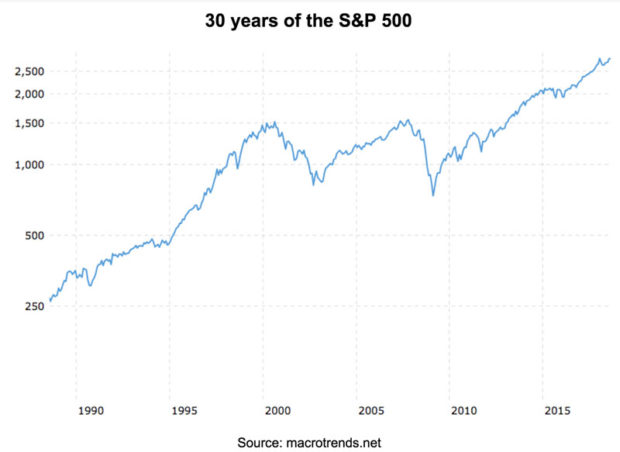 That chart uses a logarithmic (log) scale. Put simply, a log scale means the same percentage change up or down always looks the same size to the naked eye. Hence, a doubling (+100%) from 250 to 500 on the vertical scale looks the same size as a doubling from 500 to 1,000…or from 1,000 to 2,000. This is useful over long time periods, since without a log scale the same percentage moves appear to get relatively bigger from left to right.

If the market went up at a constant rate every year, this chart would be a straight line that rises from the bottom left to the top right. Imagine that trend line in your mind’s eye. For me, at least, it looks like the market is well above trend. Somewhere between 1,500 and 2,000 looks like the trend level, based on the long run progression.

If you haven’t read it already, I recommend you look at the previous article before continuing. In short, I looked at some of the current complications with valuation multiples. In particular, I found that the changes to consensus forward P/E multiples, following the tax cuts, pointed to profits for companies in the S&P 500 getting a 13.5% boost. Even assuming that’s achieved, it still leaves valuations well above their long-term averages.

In any case, there are some likely headwinds to profits. These include things such as rising interest expenses (once debt is refinanced at higher rates than were available in recent years), increased input costs (e.g. higher wages and new import tariffs), and a strengthening dollar (which means foreign profits are compressed when included in dollar earnings statements).

Getting back to the potential profit boost from the tax cuts, I found some additional data which gives us further clues. S&P, the index provider, recently reported that S&P 500 companies paid $312 billion in corporate taxes during 2017. Of that, two thirds was paid in the US and the rest overseas. Assuming the US tax rate falls from 35% to 21%, that would cut the overall rate to 21% also, down from 29% last year.

In turn, this would boost the after-tax index profit margin from 9.2% to 10.2%. Net profit from tax cuts alone (assuming no margin erosion from basic capitalist competition) would thus increase just under 11%.

[Note: You can work out net profit margin for the index by dividing the the price-to-sales (P/S) ratio of 2.1 by the price-to-earnings (P/E) ratio of 22.9, which is E/S, expressed as a percentage (9.2%). Ratio figures from multpl.com]

That’s pretty close to the 13.5% tax lift that I derived from changes to the forward P/E consensus. So it seems we’re in the right ballpark. It still leaves the adjusted P/E at 20.6 (versus a historical median of 14.7) and the adjusted CAPE at 29.3 (versus a median of 15.7).

By either measure, big falls are still required to get back to “average”, even with the tax cuts. The average fall of those two measures would be 38%, which points to an index level around 1,780 (in the middle of the estimated trend range that I got from eyeballing the first chart).

But let’s go one level deeper again. According to S&P, the index provider, the whole S&P 500 index is up 6.9% year-to-date, since the start of 2018. But that can be broken out further – between the information technology (tech) sub-index and the rest.

[Note: The S&P 500 has a market capitalisation of $25 billion, the index excluding Tech & Telecoms is $18.3 billion and the Tech index is $6.3 billion. The missing $0.4 billion is telecoms, which is basically AT&T and Verizon Communications.]

This begs a couple of questions. Are the high valuation multiples for the overall index caused by a bubble in tech? If so, are non-tech stocks better value?

It certainly looks like tech stocks, on the whole, are pretty pricey. At the end of July, using S&P’s own numbers, the trailing P/E ratio for the tech index was 30.6. But the trailing P/E was still 22.3 for the index that excludes tech (these figures are unadjusted for any uplift from tax cuts).

That leaves non-tech stocks still looking pretty pricey by historical standards. But – amazingly – it appears this can largely be explained by one single, giant stock: Amazon Inc. (NASDAQ:AMZN). You know, the people that assemble and deliver cardboard packaging (okay, and provide data hosting for corporations and TV entertainment to subscribers).

(Even worse, Amazon trades at 223 times free cash flow. That’s using a meaningful measure that deducts principal repayments on capital leases, mainly for properties. Even assuming high growth for many years, the stock is almost certainly only worth a fraction of its current price.)

The latter is actually just below the median trailing P/E of 14.7 for the S&P 500 since 1871. Strip out pricey tech and even pricier Amazon, and the rest of the index starts to make sense.

Of course, there will still be a lot of variation within what’s left (429 stocks). Some stocks will be around fair value, others will be cheap, others will be expensive. But, with this insight, the US market suddenly looks like a much more interesting hunting ground.

If there are any fund managers out there, I propose you create a new ETF that tracks an index of the S&P 500 excluding technology stocks and Amazon (and anything else that’s obviously bubbly). Note: it’s not the so-called S&P 500 Value index, which has a P/E around 20 (or 18 if you assume an uplift to earnings from the tax cuts).

In the meantime, one thing seems pretty clear. Stay away from Amazon stock, with its stratospheric price in relation to sales / profits / free cash flow. The company is high profile, there’s a good chance you’re one of its customers, and company sales and profits are growing at a healthy clip.

But Amazon needs many more years, even decades, of fast-paced growth for the current stock price to make any sense. In fact, I doubt it it’s worth much more than half the current level. Relying on perfect business execution (risky), over a long time period (even riskier), to justify a very high valuation (riskier still) is a strategy that rarely works out.