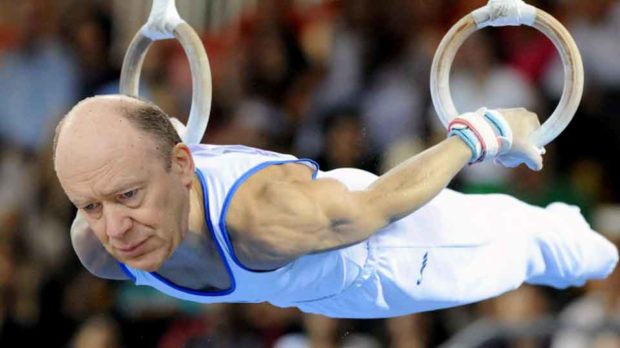 Last year practically everyone hated Deutsche Bank (XETRA:DBK / NYSE:DB) and the stock crashed. I reckoned the fears were severely overdone. So in July I recommended to OfWealth readers that they should buy the bank’s stock. Anyone who followed that recommendation made a substantial profit. But this banking turnaround story still has a long way to run as the stock is still dirt cheap.

Long story short: back on 29th July 2016, at a price of 11.81 euros, DBK stock had a price-to-tangible book ratio (P/TB) of just 0.32. Since liquidation value is a P/TB of 1 this was clearly dirt cheap, with or without the need for a big capital raise. Deutsche Bank was a troubled turnaround story being sorted out by an excellent CEO, John Cryan, who had fairly recently taken the helm. As CFO he did a lot to save UBS Group during the financial crisis.

(“Tangible book value” is net assets, or shareholders’ equity, less something called goodwill. Goodwill is an accounting oddity that results from corporate acquisitions, and should be stripped out when valuing companies.)

By 2nd March this year the price was all the way up to 19.53 euros, a gain of 65%. So far so good. But then things got complicated, when just a few days later the bank announced a 1-for-2 discounted rights issue, a type of capital raise.

That’s now out of the way. But since DBK has published first quarter results today (27th April) it’s time for another close look. Even if you buy DBK stock now you could still double your money in the next few years, and perhaps more.

(For a full explanation of the mechanics of discounted rights issues, why they make stock prices fall but don’t leave investors out of pocket, how to calculate a “theoretical ex-rights price” (TERP), and much more see “Why the Deutsche Bank capital raise is not negative”. In there you’ll find a link to the 2nd March analysis, which in turn has links to my three original articles about DBK from July the previous year…for those who want the full story.)

When the rights issue was announced I recommended that anyone that already owned the stock should exercise their rights. That meant buying one extra share, priced at 11.65 euros, for every two shares already owned.

This is because that way you have the luxury of deciding when to sell and take the profit on the new rights shares. The alternative is selling your right (to buy a discounted share) during a tight trading window. In my experience you usually get a poor price if you choose that option.

Taking this approach turned out to be particularly relevant this time. A discounted rights issue should ALWAYS lead to a drop in the share price (see the link above for a full explanation). But bizarrely, and incorrectly, in DBK’s case this price fall happened twice.

Once on 6th/7th March immediately after the original announcement, which contained enough detail to calculate how much the price should fall (in theory). And once again on 20th/21st March, immediately after detailed terms were confirmed.

In other words this looks like a classic case of markets being deeply inefficient as soon as something remotely complicated comes along. As a result the chances are that people who sold their rights during the trading window would have got a bad deal. (It also means there is clearly still a role for human analysts and plenty of opportunity for value investors.)

In a minute I’ll turn to the future potential for this stock. But first let’s see how it’s done since I recommended it in July. That includes following the later recommendation to buy extra shares in the rights issue.

For each two original shares bought there were rights to buy one more share (“1-for-2”) at a discount to market price. Investors could sell the temporarily bought rights share today, and we can calculate a profit on the cost of the two original shares. Or they could plan to keep all three shares, in which case it makes more sense to work out profit on the cost of all three shares.

Selling now would give a profit of 62.5% on the original cost of two shares. If all shares are kept then the profit’s already 42% on the total cost of three shares. Here are the calculations, with DBK trading at 16.68 euros at the time of writing: 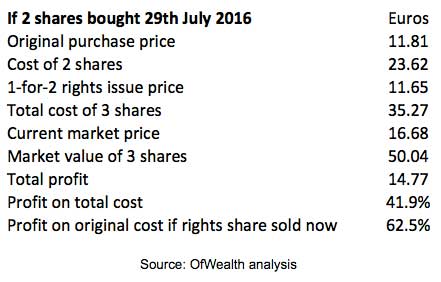 Under most scenarios I’d recommend keeping all shares as there’s so much upside still to come (as I’ll show in a minute). The only situation where I recommend reducing the position is if it’s become uncomfortably big.

After all, three shares at the current price are worth more than twice two shares at the original price, and are set to keep climbing. Remember: diversification is paramount. Even though there’s plenty of profit potential left DBK is still a leveraged bank.

Of course it’s much less risky than it used to be. Back at the end of 2006, before the global financial crisis, DBK’s tangible assets were a staggering 60 times its tangible equity (“tangible” simply meaning excluding goodwill). Before the rights issue this had come down to 34 times leveraged, and now it’s down to 26 times.

Solid first quarter 2017…if you know about silly accounting rules

Since we’re looking at DBK’s financials, here are some quick comments on the first quarter results. Basically they were pretty uneventful. The headline figure was that revenues were down 9% year-on-year. But in reality they were flat once you adjust for the stupid way that banks have to account for their own debt liabilities.

Basically a bank’s bond liabilities aren’t shown according to how much money is owed at maturity. Instead they are “marked to market”, meaning shown at the bonds’ market prices on the day of the balance sheet. Changes to these values add or subtract to revenues, even though there’s no real business effect.

In the case of DBK its bond prices rose in the first quarter as credit spreads (perceived riskiness) reduced, thereby increasing its debt liabilities and hitting revenues. During first quarter of 2016 the opposite happened. Strip this out and quarterly revenues are flat year-on-year at 7.7 billion euros.

At the same time costs are coming down, in line with promised cost cutting. Underlying expenses are down 4% year-on-year, the number of bank branches is down 7% and employees have reduced 5% on a like-for-like basis (with much more to come under restructuring plans).

Adjusting for the silliness of the bond accounting, I estimate net profit after tax of 0.9 billion euros for the quarter and return on tangible equity (ROTE) of 6.8%. That’s well on the way to the 10% ROTE target that CEO John Cryan wants to achieve by 2021 (or before).

In previous analysis I’ve outlined three valuation scenarios for the stock: Conservative, Realistic and Stretch. In all cases I’m assuming the targets of 10% ROTE and a 70% ratio of costs to revenues are both reached. Also that 50% of profits are paid out as dividends within a couple of years. That would bring payout in line with European peers, which is what Cryan has said he wants to do (with no specific target though).

The realistic scenario is my base case, with P/TB reaching 1. But it could equally go much higher, and the stock is attractively priced today even if P/TB undershoots my base case.

This is how the figures look under those scenarios using the latest results and my latest profit and dividend estimates: 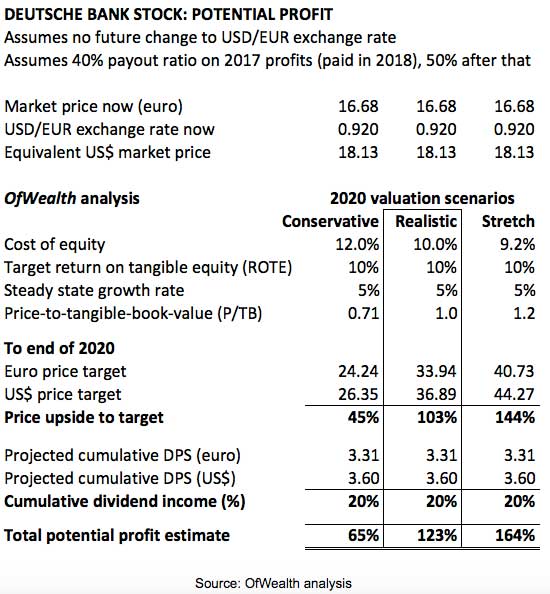 In other words you could more than double your money within a few years if you buy the stock now. And if you bought DBK when I first recommended it in July last year then the total upside is even more.

Under the realistic scenario (P/TB reaching 1), and assuming you bought the extra rights shares and keep hold of them, the total profit could be 217%. That would mean coming away with more than triple the amount invested (less any taxes and brokerage costs). 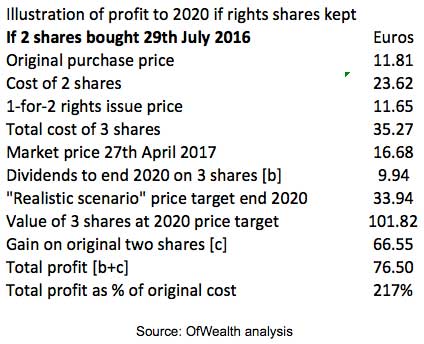 Deutsche Bank’s turnaround continues, and its stock is still extremely cheap. If you’re prepared to wait a few years then the profits should be substantial, doubling your money from here…or more.

Just remember, don’t bet the farm – this is still a bank, albeit a much less risky one than a few years ago. But I reckon it’s easily cheap enough to make up for the risk.