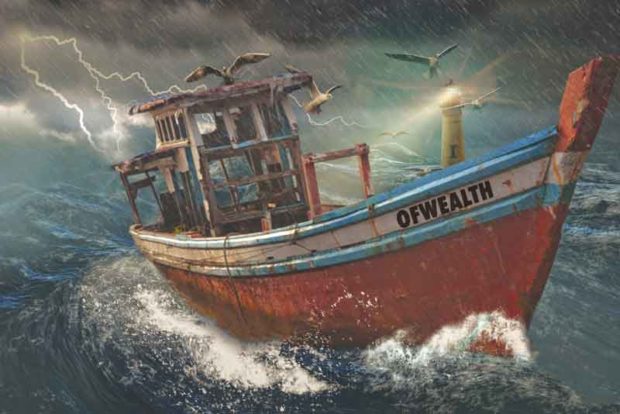 The time zone in New Zealand takes some getting used to for a newbie like me. It’s 6pm on Thursday as I start typing. That’s 6am in London, 1 am in New York and 8pm on Wednesday in Los Angeles.

The world’s main markets ground away last night (New Zealand time). I awoke to discover that the S&P 500 index of US stocks was sharply down again, having lost 3.1% during Wednesday’s session. It’s now down 9.2% since 3rd October. The tech-heavy NASDAQ Composite index lost 4.4% on Wednesday, and is now down 12.6% from its 29th August peak. I’ll give you some thoughts on what may be causing it (or not) a little later on.

There have been few places for investors to hide this year. The MSCI All Countries World Index (ACWI) of stocks is down 8%. The S&P 500 index of US stocks (one of the better performers) is now down 2%. Investors in long-dated treasury bonds, which are often a safe-haven when stocks fall, are down about 9%. Gold is down 6% (although I note that it’s risen since its August low, providing a handy hedge against the stock market sell-off).

Longtime readers know that I’ve recommended a relatively conservative asset allocation for a long time. It was last updated in August 2017. At that time, I reduced the stock allocation from 50% to 40%, given that many stocks looked overpriced and value was thin on the ground. At the same time, I increased the allocation to long-dated treasury bonds from 0% to 10%, as a modest hedge against a full-blown stock market crash.

As things have turned out, this won’t have delivered huge returns. But it has done a great job at preserving wealth (and hopefully provided peace of mind in the meantime, during a period of much uncertainty).

For example, using the MSCI ACWI index for the stock part, I estimate the portfolio would be down just 0.8%. Substitute the S&P 500 index and it’s up 2.4%. But the exact performance depends on which stocks were included, and the price movements and dividends over the period.

The crucial thing is that back in August 2017, by my estimation, there were a lot of overpriced stocks in the world – especially in the US market and even more especially in “hot”, tech-type sectors. So I reckoned it was worth holding back a big portion as cash, in this case 35%.

Cash (meaning bank deposits, treasury bills or similar) has clearly been a very low return asset in recent years. So it was never in there for immediate profit. Instead, cash has two important, simultaneous roles. It’s both what I call “ballast” and “ammo”.

The ballast role is to steady the overall portfolio ship during stormy weather. As the market prices of other assets jump around, cash doesn’t budge. With 35% parked in cash, if the rest of the portfolio plunged 20% (itself unlikely, given the diversification between stocks, bonds and gold), the overall fall would be reduced to 13%.

On the other hand, and even more importantly, cash is “ammo”. When prices fall to favourable levels, it can be fired to pick off some bargains. In turn, these will deliver oversized profits in future. That will be as their prices rise sharply again, once the market turbulence has passed. Big market falls are only ever temporary.

For example, imagine stocks crashed by 50% over the course of a year. With a 40% allocation to stocks, that would cause a 20% drag on the portfolio value (at market prices).

Now imagine that all the cash (35% of the original portfolio) was used to buy new stocks, and that stock prices recovered (i.e. doubled) over the next two years. The original stocks would make back the earlier 20% portfolio loss, and 35% would be added on top as the new stocks doubled.

In this way, investors can use stock market crashes – or more modest corrections – to their advantage. This is especially true of private investors with fewer constraints placed on them (fund managers tend to operate under tighter parameters).

In this example (and ignoring what happens to the gold and bond allocations), the investor would make 35% portfolio gains over three years (plus dividends on the stocks). Hence, a market crash is converted into a profit opportunity.

Also, when stocks are bought low, there will be a higher income yield from dividends. Remember, stock prices don’t determine underlying business performance or dividend policy. So when a stock price falls due to a general market sell-off, as opposed to a company-specific problem, the stock becomes more attractive to buyers. But investors can only be buyers of bargains if they have cash available to invest.

For now, I’m not going to change that recommended cash allocation. The markets still seem highly unsettled. It’s possible that this fall will continue. But I’ll give it careful consideration in the coming weeks. Watch this space.

Why have stocks fallen?

In the meantime, what’s the trigger for this stock market fall? There are likely to be many theories. Some may be right, some partially-right, and some wrong.

On the passive fund side, the risk is that investors start liquidating their fund holdings. This turns fund managers into indiscriminate sellers of all the stocks in the index that they’re tracking. They must sell so they can raise cash to cover fund withdrawals.

Prices plunge until buyers are coaxed out (remember: all trades must have both a seller and a buyer). Stocks of good and bad companies alike see their prices drop. In turn, if the index starts falling enough, more investors start to panic, the fund withdrawals accelerate, and we’re into a vicious circle that sends all prices sharply down for a time.

At the same time, many hedge funds and other short-term traders use computer algorithms that make decisions in milliseconds, based on market data. When prices start to fall, they may decide to play the downwards momentum, adding to selling pressure. This exacerbates the problems from real investors pulling money from funds. The vicious circle can be reinforced this way.

The great news is that it leaves many great stocks trading at fantastically cheap levels, once the market bottom is finally reached. This is where those with cash to deploy can make a killing.

I can tell you from personal experience that this is possible. My best ever personal portfolio performance was in 2009, as markets bounced following the GFC-induced crash. I’d kept a lot of cash aside in the run-up, and deployed it as soon as I felt the worst had passed.

In any case, let’s get back to what’s caused this latest wobble. One person in particular has a theory, and his name is Donald Trump.

Is it the Fed’s fault?

President Trump is apparently upset that the Federal Reserve, under the leadership of Jerome Powell, is raising interest rates too much. He’s said as much on several occasions, which is not something that presidents are supposed to do.

But, since Trump was keen to take credit for the rising stock market, he now has to make sure someone else gets blamed if it falls. Hence, he said in an interview this week: “To me the Fed is the biggest risk, because I think interest rates are being raised too quickly.”

Of course, Mr. Trump is entitled to his view (although, in this case, most investment people think he should keep it to himself). But let’s examine the evidence. Is Trump right?

First, let’s be clear which “interest rates” he’s referring to here. The Fed sets a target for the Fed Funds rate, which is the rate that banks use to lend to each other overnight. The target is 2.25% and the actual rate is currently 2.2%. This rate is used as a reference point for other types of lending.

Following the global financial crisis (GFC), central banks slashed rates to ultra-low levels, and the US Fed was no exception. Below is a chart of the Fed Funds rate since late 2013.

You can clearly see how it was ultra low, but has been raised since early 2016. But is it at a reasonable level today?

The Fed, just like other central banks, toys around with interest rates as one way to control consumer price inflation (or other inflation measures). It’s usually their main policy tool in this regard. The idea is that if you make borrowing money more expensive, then fewer people will borrow it, meaning fewer new loans, slower growth in the money supply and lower price inflation.

The Fed targets inflation at 2%. So let’s compare Fed Funds (in blue in the next chart) with consumer price inflation (CPI – in red) over time.

The CPI rate for the year to the end of September was 2.3%. That was down from a recent peak of 2.9% in the year to July. Remember, the Fed Funds target is currently 2.25% (since 26th September).

I think it’s hard to see a case for rates being too high, or having been raised too quickly. It’s also not clear why rising rates would cause the US stock market to sell off this month in particular. The recent increases and future planned trajectory for the Fed Funds rate is one of the most well-communicated and closely watched pieces of information in the entire financial world.

Maybe Trump is right and it’s the Fed’s fault. Or maybe it’s just Trump expressing his views on the matter so loudly that’s caused the sell-off. Or maybe it’s something else entirely. There’s no actual way to know.

In the meantime, stay calm. I’m fully aware that these sorts of market falls are never easy in the short run. How you come out of it in the medium to long run depends entirely on how you react. Keeping a cool head is essential.

Remember: price falls are great news, when viewed in the right way. When stocks drop it means there are more bargains on offer. That means bigger future profits.

No one can predict how long the current turbulence will last, or how far prices could fall. But those with a large allocation to cash will be in best position to benefit later on.