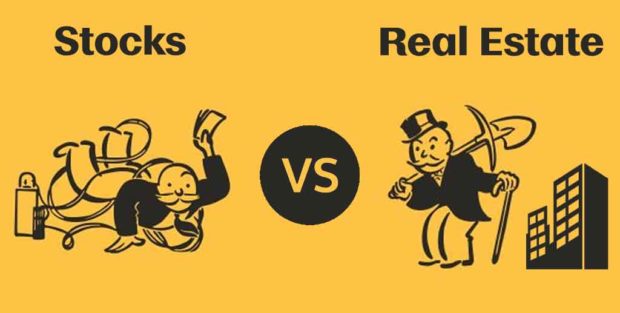 A recent report claimed that residential real estate – on average, across many countries and in the long run – has outperformed listed stocks across those same countries. This is a big claim, since it’s counter intuitive that a pile of inert bricks could beat the collective wiles of the world’s top business people. It’s time to look more closely at the real story.

The study in question has a grand sort of name to fit its grand claim: “The Rate of Return on Everything, 1870-2015” (Jorda, Knoll, Kuvshinov, Schularick, Taylor; June 2017, BMBF and Institute for New Economic Thinking). The authors work in central banks and university economics departments in the US and Germany. So some serious scrutiny is required…just in case.

Unsurprisingly, the report confirms one thing that is widely known: both real estate and stocks significantly outperformed bills and bonds. “Risky” returns were better than supposedly “safe” ones. But, much more significantly, there’s the big finding that houses beat stocks.

I introduced this topic earlier in the week (see here if you missed it). Clearly this is comparing indices of rental properties with country stock markets. In other words, the rental income is an important part of the real estate return, not just the rising prices.

Put another way, this isn’t talking about returns from owner-occupied homes. You don’t get the rental income from the house you live in. What we’re looking at here is investment property that can be rented out to tenants.

The “Rate of Return” paper covers a lot of places over a long period of time. In general, the relative performance of houses was best versus stocks before the second world war. That war itself was highly disruptive in many of the countries covered, with plenty of houses and businesses decimated.

So, as far as the historical data goes, it’s best to focus on the largely peaceful post-1950 period. Here are the relevant performance figures, extracted from the report:

You can see that houses beat stocks by 2.59% a year on average, and that almost all of that outperformance was due to a higher income yield. In other words, rents were higher than dividends. Also, inflation ran at an average 4.6% a year, which seems high compared with these days.

This looks pretty conclusive at first. That said, the real (above inflation) capital gain on houses of 2.27% a year is much higher than I’d expect. As I showed last time, US home prices have only just about beaten inflation in the past. But countries like Norway, Belgium and Finland performed extremely strongly, pulling up the average.

Also, there are some extremely important elements missing: ownership costs. I’ll come back to those in a minute. First, let’s look more closely at how these asset classes stack up before those – especially their future potential.

Inflation is likely to be lower in future in developed countries than the 4.6% in this sample. Populations and productivity are growing more slowly and debts are already high. So, in terms of working out – in broad, general terms – how stocks and real estate are likely to stack up in future I’ll assume a much lower inflation rate of 2% a year.

I’ll also assume real capital gains and income yields are similar in future to those of the past, across these 16 countries. That gives these ballpark, expected, gross return figures as follows:

This still puts houses 2.3% a year ahead overall. That said, I suspect the real capital gain figure of 2.3% is generous. But let’s keep going and see where we end up.

Now let’s get back to a very significant factor in all of this: ownership costs. I’ll leave out the costs of buying and selling – the transaction costs. But both stocks and houses have ongoing expenses that have to be paid each year, paid by either the landlord or the stock investor.

Obviously enough, the amounts can vary widely depending on where you live and so forth. But, based on my own experience, I’ve listed the main ones below, along with some ballpark amounts for each, shown as percentages of the total asset value.

Up to this point I’m still looking at unleveraged investments, so there’s nothing in there for mortgage interest costs. Even though these are only rough indications, it’s pretty clear that houses come with a lot more cost overhead than a brokerage account.

According to my estimates over 2% is knocked off real estate’s outperformance against stocks. Then there’s income tax. Again this varies by jurisdiction and person, but I’ll assume 20% comes off the income, after other deductible costs. Here’s what the pre- and post-tax returns now look like: 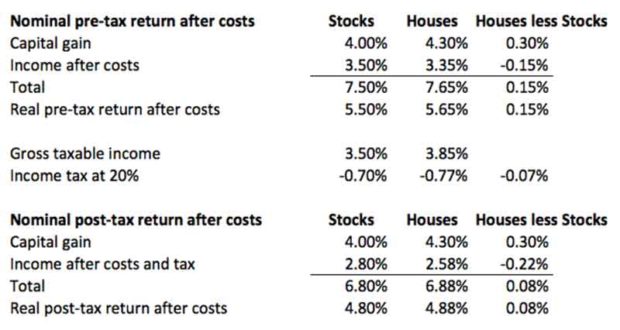 Suddenly, in what I reckon is a realistic scenario, there’s virtually no difference between the likely annual returns on stocks and real estate. The gap’s narrowed from 2.3% a year to less than 0.1%.

But this still isn’t the full story. With stocks, the net income – dividends – can be reinvested every year straight into more stocks. That’s because investors tend to own a large number of individual shares, and the small net dividend yield is enough to buy a few more. This way, the full 6.8% a year (4.8% after inflation) is achievable.

Directly owned houses are different. You can’t buy one extra wall each year. You have to buy a whole home at a time. So, with the net rental yield in low single digits, it will take decades before you’ve put aside enough cash to buy another equivalent property.

In the meantime, if the investor does nothing else, the uninvested cash makes a low return that’s a drag on overall performance. Assuming zero return (it’s close to that, isn’t it?), I calculate that the overall return would drop to the equivalent of 5.8% a year over 20 years.

That’s a full 1% a year less than stocks. Put another way, the end result would be 18% worse after two decades, with compounding – and more and more, the longer the time period.

This makes it clear why even the most committed real estate investors should invest in stocks as well. Even if their end game is to buy more property eventually, they should maximise their returns by (selectively) buying stocks with any spare rental income. (Subject to general conditions and appropriate portfolio allocations – see my latest recommendation here.)

Of course, up until now I’ve taken no account of leverage. I don’t generally recommend borrowing to invest in stocks (the exceptions are rare, and a topic for another day). In a market crash it’s too easy to get caught out, and become a forced seller at the bottom of the market. That’s when the bank or broker demands a loan repayment due to insufficient collateral.

But houses, of course, are easily leveraged with relatively cheap mortgages – especially these days. I’ve worked out a scenario where a house is 75% funded with debt at 4% interest. If the mortgage payments are interest only – meaning the mortgage balance stays the same – and the interest cost is tax deductible (which depends on where you live), this has a big effect.

In this example, the net post-tax mortgage cost ends up being 2.6% of the initial house price (4% x 75% x 80%). This reduces the net income piece of returns to just 0.18% of the house price in the first year, although it increases over time as rents rise but the interest cost stays the same.

But that’s more than offset by a huge uplift in the leveraged capital gains. These are now four times as large, expressed as a percentage of the cash funding of the purchase (the investment capital). Overall, over 20 years, it works out that profits are almost 2.1 times as much.

Here are the equivalent compound annual profits over 20 years for the three different alternatives that I’ve outlined:

It’s clear that leveraged rental property can be a highly attractive investment if done correctly. That said, these figures include perhaps optimistic figures for capital gains on real estate, as I mentioned previously.

Also, you shouldn’t forget that leverage magnifies the risks. Mortgage interest rates could go up, potentially meaning there’s not enough cash rental income to cover interest charges, once other costs have been covered. Taxes could rise too, as recently occurred in the UK when the government removed the deductibility of interest expenses for rental properties.

What’s more, if interest rates rise then it’s likely that house prices will fall. With leverage this means the value of the net investment can collapse, or even go negative. That’s when the mortgage ends up larger than the property value (which is known as being “underwater” or in “negative equity”). “Owners” then owe more than they own.

The use of leverage always adds risk, so use it with caution. By which I mean you should leave plenty of wiggle room for the market to move against you.

There’s another thing I should mention. If you want the long term returns of real estate but the convenience of stocks – such as being able to easily reinvest income – you can opt for shares of REITs (Real Estate Investment Trusts).

If you pick the right kind of REITs they own physical property, already have some debt leverage (equivalent to a mortgage), and pay you all the net rental income after covering costs. Even better, from time to time and because stock markets are inefficient, you can buy them for a big discount to their net asset value.

In other words, the stock market often prices REIT shares temporarily well below than their property values minus their debts. That’s usually a great bargain.

In the past I’ve found REITs that own prime offices and apartments in places like Singapore that traded at huge discounts. The profits over the next three or four years – as the discounts disappeared, property prices rose, and dividends were paid – were typically in the 50% to 75% range, which is way ahead of average stocks.

In the end, whatever you do, there’s room for both houses and stocks in any investor’s portfolio. Today I’ve looked at these two asset classes in very general terms. In the end what matters is choosing carefully. Overpaying never made anyone rich.

There are both good and bad investments in both real estate and stocks. But it’s good to know that, if you approach them correctly, you can make highly attractive returns from either.