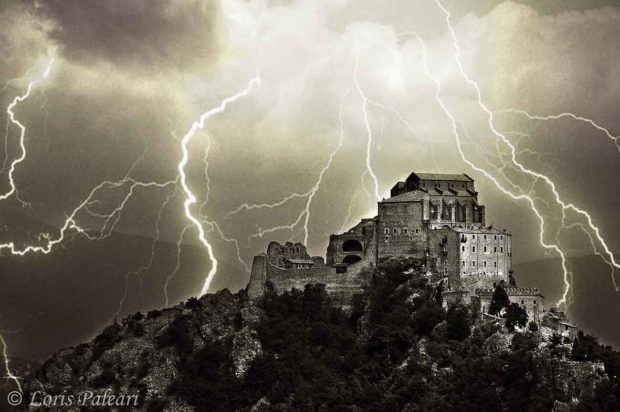 Imagine your overall investments plunged by 50%. Would you panic? Almost certainly. When the over excitable media starts to scream about the latest market storm, only the hardiest souls stay calm. This means investors need to take steps to storm proof their investments. Today I take a closer look at what’s involved, and what to own today so that you’re ready for the next market storm.

Earlier in the week I started to look at why owning a mix of investments gives you a smoother ride overall. This is good for your nerves and for your fingernails. Especially if we’re talking about money you’ll need to rely on now or in the future, like funds for retirement.

The simple example I used was for someone who put equal amounts of money in gold and the S&P 500 at the end of 2005 and left the investments untouched for ten years. I called this the “50/50 portfolio without rebalancing”. (For more see here.)

In reality you shouldn’t ever have just two investments like this – a single country stock index and one precious metal. You should aim for a much broader spread of investments. Each must be attractive in their own right, and as different as possible to the others. But this basic stocks/gold example is just an illustration to make a point.

This simple portfolio gave a decent result, without huge price swings. But there was a massive drawback. At one point it moved way off the 50/50 target, with three quarters of the money riding on gold and only one quarter in US stocks.

No investor – especially when we’re talking about a retirement fund – should ever have too much money riding on one thing. It exposes them to those nail biting swings in the total value of their investments that they should be trying to avoid in the first place. Never mind that the “one thing” could itself go horribly wrong for years, or even decades.

Fortunately there are ways to deal with this. One solution is to rebalance the investments at the end of each year.

So you sell some stocks and use the money to buy some more gold instead, bringing you back to an even split. You then repeat the process once a year – selling a little of the best performer, and buying more of the other. I’ve called this the “50/50 portfolio with rebalancing”.

The investor that did that in my example boosted the return to 6.8% a year, or 0.7% more than the 50/50 portfolio without rebalancing. Here’s a chart which shows how $100 invested into each of gold, stocks and the two 50/50 portfolios would have performed. 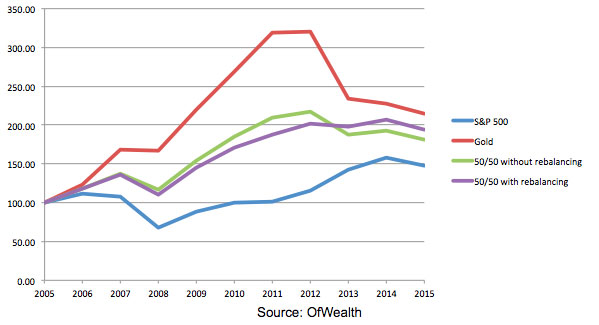 Doing this kind of annual rebalancing resulted even smoother progress than before. It also ended up with a better end result, although it’s worth noting that the purple line (with rebalancing) was lower than the green line (without) for most of the time.

In other words the rebalancing will almost certainly reduce the size of the price swings, which is good. But there’s no guarantee that it will give a better result in the end. That depends on what the investments are, how their prices change relative to each other, and the passage of time.

Fortunately there’s a way to refine this model which improves the result further, at least if you get it right. I’ll call this “dynamic portfolio rebalancing”.

This is the idea that the target amount in each investment isn’t fixed. Instead you make a judgement call each year and fine tune your targets.

Of course this is subjective, which makes it prone to error sometimes. But with only modest insights it’s perfectly possible to get an improved result in the long run.

In any case, you have to choose which investments you own in the first place. So why not go just one step further and decide how much you want of each at the end of each year?

That doesn’t mean you have to change things all the time. It just means taking account of current conditions, and having a view on where the best prospects lie for the future.

Which brings me to what to do now. Back on 29th September I made the following recommendation of how to split your investments (see here for the full article):

You’ll note there are no bonds in there. Bonds in general are in a bubble, meaning there’s lots of risk. Even if bond prices don’t crash the return prospects are extremely poor. Low, no or even negative yield is what’s on offer.

High grade government bonds will almost certainly increase in price if stocks crash. But they could lose you money the rest of the time, if yields rise even a little bit above current inflation (meaning prices fall). Avoid.

I’ve regularly written about why everyone should own some gold. This is all covered in detail in my recent special report “The best ways to buy gold”, which all regular OfWealth readers have received. But if you haven’t seen it yet then you’ll find it at this link.

As for stocks, any regular reader knows I’m not keen on US stocks. They currently have very high prices, at least at the aggregated index level. See “America Inc. is destroying value on a massive scale” for the latest.

Of course this still means you could own individual stocks of US companies. That is, if you can find good companies that trade at a reasonable price. But they’re pretty hard to find these days.

Most of the best stock investment opportunities are currently found outside the US. Many of the emerging markets are downright cheap (but certainly not all of them). There are also opportunities in some non-US developed countries. See the earlier article for more detail.

Then there’s that “cash and bank deposits”, which can also mean ultra-short dated government bonds, such as treasury bills. The prices of very short dated bonds don’t change much, since they’re about to mature – meaning the loan is about to be repaid.

Cash is always a loser in the long run, and that’s especially true nowadays with ultra low deposit rates (or yields in the case of T-bills). Price inflation keeps grinding away at cash, meaning it loses purchasing power over time.

But there are times, such as now, when it makes sense to hold a lot of cash. That’s when attractive investments are in short supply, which is pretty much the same as saying that most stocks are expensive.

The US stock market is the big daddy of stock markets, currently making up about 40% of global market capitalisation (value of all stock markets at current prices). It’s also very pricey.

If (when) it crashes then it will pull other stocks down with it. Even other, better priced markets will get dragged down in the general maelstrom, at least for a short time.

So, in these conditions the big amount of cash is there for two reasons.

First it’s “ballast”, meaning it isn’t subject to price swings. It provides stability. Even if stocks fall hard the overall portfolio value won’t take a massive hit. This is good for peace of mind.

Second it’s “ammo”. This means it can be used to scoop up future bargains – such as after a stock market crash. Cash may not make a profit today. But when it’s fired off in the future it will more than make up for it.

I believe my recommended allocation is like a castle built on a rock. It may still get draughty at times, but it’s built to last. It will weather the worst that markets can throw at it. At least compared with the shacks that most other people inhabit. It’s safe in an uncertain world.

At the same time it should also make a decent profit from the (well-priced) stocks and the gold. That’s in an environment where attractively priced investments are relatively thin on the ground and yields are ultra low.

And now, in my enthusiasm, I’ve overrun. You’ve probably had enough for today.

Next time I’ll show you further evidence I’ve discovered that my recommended allocation – which, to be honest, was largely intuitive when first proposed – is pretty much spot on target.