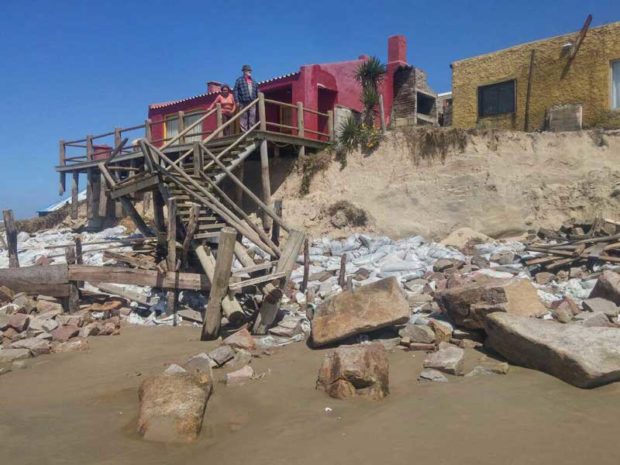 “The biggest storm in 40 years. More than thirty houses destroyed by the sea.” That was last week’s headline about the small town where I usually spend the summer holidays. Only the best protected beachfront properties survived the onslaught. Others were toppled into the sea, and are gone forever. But what about when a big storm hits the markets? How do you protect your investments from a major and permanent loss?

The storm in question slammed into a sleepy place in Uruguay called Aguas Dulces. Most of the time not much happens there, which is why I like it.

It’s a summer escape from city living, from crowds, from the news. The kids can play on a wide, sandy beach. The parents can read a book, at least when not required to help with sand castles.

The coastline in Aguas Dulce is eroding. The dunes retreat a little further each year. Owners have been in a battle with nature that they were sure to lose eventually.

Many had put up sea defences to delay the final reckoning. Sandbags, concrete, wooden palisades, and variously sized piles of rocks looked like they would withstand pretty much anything.

Then, without warning, nature sent in the shock troops. The biggest storm in 40 years hit last week. A huge swell came in off the south Atlantic, and wiped out dozens of houses by the beach.

You can never tell when the “40 year storm” is coming. But you can be sure that there will be tempests from time to time. All you can do is to try to protect yourself as best you can. You’ve got to build your house well, and on solid ground.

The same is true of investment. You need a portfolio constructed on solid foundations.

Markets can appear smooth and free of trouble for years. Then the wind gets up and the waves roll in. Prices crash. People panic. But if your “house” is solid enough then there’s nothing to worry about.

I’ve recently written about how price swings are a gift from the markets to private investors, and not something to be feared. That’s if – and only if – you take the right approach (See why here and five guidelines on how to profit here).

So you may think it’s strange that I’m now raising a red flag. If price swings are something to take advantage of, then why worry about market storms?

There’s an important distinction here. When we’re talking about individual investments, price swings are something you can profit from. But no one wants all their investments to collapse at once. This is especially true if you’re relying on the funds for your retirement.

The market prices of individual investments can be decimated, for a time at least (they usually recover). The aim is to own others that will stay stable, or even benefit, under the same circumstances. This is essential if you’re going to stay sane, and with intact fingernails.

I’m talking about “portfolio diversification”, to use the financial industry lingo. It’s about spreading your money across different investments with different characteristics.

All of them need to have good prospects in their own right, based on what you know – or think you know – when you buy them. But if one goes wrong you want the peace of mind of knowing that others will survive, and even thrive.

We had a major market storm between 2007 and 2009, known as the global financial crisis. It was more of a hurricane really. But in the run up, before it hit, it would have made sense to own some stocks (say the S&P 500 index), commodities, gold and government bonds.

US stocks looked like they had good prospects in 2006, as the economy was doing well both at home and abroad. (Companies in the S&P 500 make between a third and a half of their combined revenues from overseas.)

The big commodity story of the time was the “super cycle”. Chinese and other emerging market demand was sending prices rocketing, ultimately ending in a bubble (and bust) in mid-2008. Gold was a few years into a new bull run that had started in 2001 (after two decades of falling prices).

Government bonds still had a decent yield, well above inflation. Long dated US Treasury bonds yielded around 5% with inflation running at 3%. Nowadays a 10 year treasury yields just 1.9% with US CPI at 1.5% (and probably higher in reality – see here).

In the past 10 years, all those investments have thrived and dived at different times. Overall, gold more than doubled, stocks and long dated treasuries gained 50-60%, and commodities have been about flat. Three out of four ain’t bad.

An investor who put a quarter of their money in each at the end of 2005, and who never changed their mind, would have made 4-5% a year up until now – if they hadn’t touched anything.

That’s not great. But it’s also not bad during one of the toughest times for investors in decades, both during the crisis and since.

So let’s take a closer look at how it works. To do that I’ll simplify further, and just examine the S&P 500 index of US stocks and the price of gold. Also I’ll look at the 10 year period from the end of 2005 to the end of 2015, since they’re full years.

I’ll also leave out dividends, because they make the modelling much harder. This is only an illustration, and adding dividends doesn’t change the main findings. But including them would add a little to the overall results.

The S&P 500 index rose 4% a year on average over those 10 years. Gold did better overall, but at different times. It returned an average of 8% a year.

So you might think the best thing to do was to just own gold. And you’d be right – but only with hindsight. It was impossible in 2006 to know how things would pan out.

The easiest way to smooth out these big swings was to own a bit of both assets. Let’s say you put half your money into each of stocks and gold at the end of 2005. And then let’s say you never made any trades, but just let the markets take their own course. I’ll call this the “50/50 portfolio without rebalancing”. 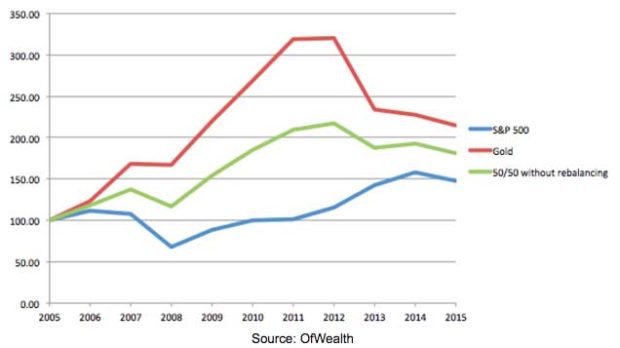 Splitting your investments smoothes things out, which is good for the nerves. Big falls in one thing are offset by rises others. But there’s a major drawback. I’ll go back to my example to explain.

The problem with the split portfolio is that for five out of the ten years you’d have ended up with over 70% invested in gold. That was due to its strong price rises up until 2011.

And if we’re talking about investments for your golden years – your retirement funds – it’s even more important to avoid such a position. Taking such concentrated risk – a portfolio built on shaky foundations – is a complete non-starter.

So what can be done to get over this?

That will have to wait until next time, when I’ll look at a solution that’s often proposed. But it also has major potential drawbacks. Fortunately there’s yet another approach which can overcome them.

I’ll also take a closer look at what you should own under current market conditions. I last wrote about it in September (see here), but I’ve found a way to further explain the right thing to do, right now, based on what we know.

We can never tell when…or how large…or from which direction the next big market storm will hit us. But we can take meaningful steps to protect ourselves.