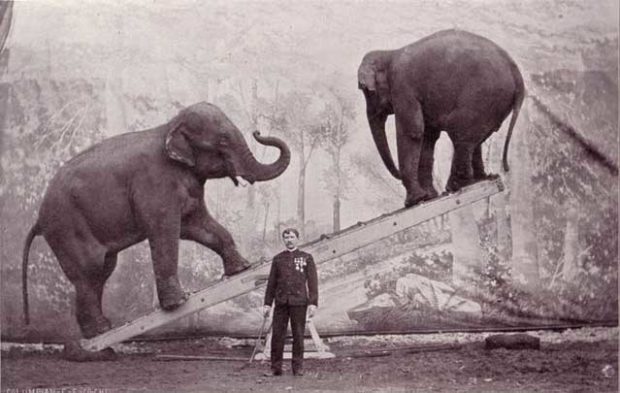 We’ve already passed the end of the first quarter of 2015. Now the results are in for which asset classes have been the best and worst performers. Russian and Chinese shares lead the pack, Greece and Brazil bring up the back. It’s a timely reminder that investors shouldn’t try to predict the future.

Analysts at Deutsche Bank, the German headquartered investment bank, recently took a look at the best and worst performing asset classes for the first three months of the year. Below is their chart comparing 42 different categories, all measured in US dollars for an apples-to-apples comparison (click here for a larger version). 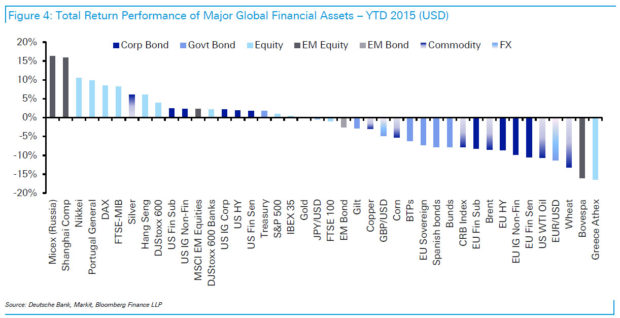 The best performers by far have been the Russian Micex share index, up 17%, followed by the Chinese Shanghai composite, up 16%. Russian stocks entered the year cheaper than ever. After a big currency devaluation last year, on the back of economic sanctions and a plummeting oil price, it’s no surprise that prices are now bouncing strongly.

The Russian rouble plunged 51% from 34 per US dollar in July last year all the way to 70 per dollar on 1st February this year. But now the rouble has rebounded strongly to 57 per dollar at the time of writing, up 23% from the bottom. At the same time Brent crude oil plunged from over US$110 per barrel in July to US$51 by January, but has since rebounded a little to US$57 per barrel (see chart).

Domestically listed Chinese shares, known as “A-shares”, have also done well. These are traded in Chinese renminbi yuan in Shanghai and Shenzhen, and are still mainly the preserve of local investors, or more accurately speculators. Last year I wrote about the latest step in opening up this market to foreigners. We’re overdue for an update on what’s happening in China. For now just be aware that the Chinese stock market is performing well.

Russian and Chinese stocks are the standout performers, but after that come Japan and a smattering of European stock market indices – Portugal, Germany (DAX) and Italy (FTSE-MIB), all in the plus 8% to 10% range.

I’ve written before about how I’m sceptical about the Japanese investment story. It’s a bankrupt country resorting to ever more desperate money printing and currency devaluation to solve its debt problems. It simply doesn’t make sense as a long term investment destination: there are better bargains with less uncertain outlooks.

Plus there are recent signs that the latest Japanese policies are failing: Japanese year-on-year industrial production was down 2.6% at the end of February. Plus annual wage inflation of 0.8% is running well behind consumer price inflation of 2.2%. That’s no recipe for increased consumer spending, if wages are falling behind price rises. Japan is best left to short term speculators and not investors.

Of course it’s no surprise to find a handful of European stock markets following on from Japan. After all, the European Central Bank (ECB) has finally decided to follow on from the Bank of Japan (BoJ) and print vast amounts of new money under the so-called “quantitative easing” label (QE). See our previous tributes to this fraudulent practice here and here, and a short tribute video here.

It may not have worked to boost the economies of the US, UK or Japan. But it’s certainly done a lot for stock prices (US stocks are highly priced using just about any measure). The ECB announced in January it will print 60 billion euros a month to prop up bond markets, which started in March.

In anticipation of how that will also drive up stocks, but this time in Europe, many have jumped on the bandwagon. However, in the end the fundamental chickens will come home to roost, and many will be disappointed.

At the other end of the scale we find the Greek (Athex) and Brazilian (BOVESPA) stock market indices, down 17% and 18% respectively in US dollar terms.

Recently I wrote about the Greek market, and how it’s down 95% since the global financial crisis. The question is whether that makes it a bargain or not. Normally, after such a catastrophic slide, that would be an unequivocal “yes”. But in this case there remains a substantial devaluation risk. A “Grexit” from the euro could take stock prices down by another half in dollar terms, give or take.

Plus the political rhetoric doesn’t appear to be calming down at all. Just this week the Greek government has claimed that Germany owes it 279 billion euros of second world war reparations from the Nazi occupation. With these kinds of ghosts from the past being dragged back into the limelight it’s hardly going to make the debt negotiations easier.

And Britain’s Telegraph says a high level source within the Greek Syriza led government leaked plans to nationalise the banking system and exit the euro if negotiations fail. While many continue to claim the Grexit option is still unthinkable they look optimistic. Everything is thinkable when you’re out of options. The outcome remains on a knife edge.

Brazil, for its part, has been swept up – or should I say down – by the huge corruption scandal at Petrobras, the state controlled oil giant, combined with general weakness in oil and other commodity prices.

In terms of the corruption issue, hundred of millions of dollars have been siphoned off to the ruling Workers’ Party in past years via overpriced construction and supply contracts. This has provoked a political crisis and loss of confidence in the country.

Petrobras itself has had its credit rating downgraded as the publication of financial results has been delayed. This is amid wrangles over how many billions in asset write-downs will need to be taken to reflect the overcharging. These figures have been promised by the end of April. Once we know more I’ll give you my take on whether Brazilian stocks present an opportunity for investors (the short answer is yes…probably).

So there you have a snapshot of the first quarter. However, looking at investment performance over the short span of just three months has limited value. Long term performance is what really matters. But taking a look at recent moves does remind us of one very important thing: we can’t predict the future.

Most expected Russia would go into full meltdown, but instead it has stabilised and markets are rising again. Yes the economy will slow down due to sanctions and the weaker oil price. But the Russia has rock solid finances (current account surplus, large foreign exchange reserves, balanced budget, public debt only 13% of GDP). Temporary market panics, as foreigners pull out funds, are not the same as full blown economic crises.

As for Chinese stocks, few tipped them for a boom, instead convinced of an impending debt crisis. And no one knew when the ECB would finally pull the trigger on QE, or at least bend the rules enough to allow it to do so.

In Brazil the Petrobras scandal couldn’t have been foreseen. Nor could the timing of snap elections in Greece that brought in a radical swing to the political left, and a more confrontational stance with international creditors.

We can never predict the future. All we can do is diligently search out opportunities to buy investments when they look cheap. This has been a tough thing to do in the past few years. Many markets have been trading in bubble territory, and overly influenced by the policy actions of the world’s central banks. But now things could be coming to a head. That’s when opportunities will abound once again.