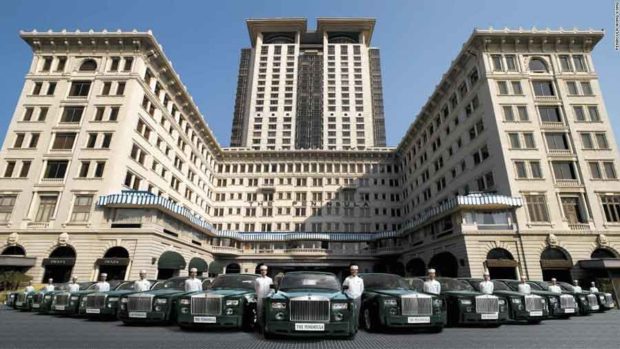 Attention all salesmen of megayachts! For the first time China is home to more billionaires than any other country, pushing the USA into second place. Asia as a whole is home to almost half the mega rich. It’s another clear sign of how the world’s distribution of wealth and hence power is rapidly shifting. The investment implications are clear.

We all know how China is an export powerhouse (see chart here). China’s fast-paced industrial revolution has flooded the world with cheap goods from toys to cars to smartphones.

This brought down the cost of living for billions of people, and rapidly raised the living standards of hundreds of millions of Chinese. The result is a massive accumulation of wealth in China. It truly is a billionaire factory.

Despite this, there are still many who labour under the illusion that China is a “communist” country. Some of them are motivated by envy or geopolitics. Many are simply misinformed.

At the same time a modest but determined few are still trying to keep the red flag flying, tattered and worn as it is.

China still has a rosy complexion, but Mao’s little red books have been replaced by capitalism, red in tooth and claw. The country is riding on a crimson tide of wealth creation.

According to the latest Hurun Global Rich List – a Chinese equivalent of the Forbes rich list that was published just a couple of days ago – there are now 2,188 US dollar billionaires in the world.

Other parts of Asia, outside of China, have 454 billionaires (21%), or which 111 are in India (5% of the global total). Outside of Greater China there are another 62 top tycoons of Chinese descent. Only ten of them live outside Asia, mainly in the USA. 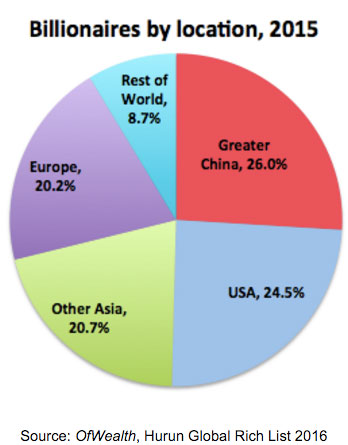 This leaves Europe with 441 (20%) and the enormous rest of the world – the Middle East, Latin America and Africa – with 190 (9%). I recommend you read “How do you know if you’re rich?” for more about global wealth distribution and where it’s growing fastest. (Clue: It’s not North America, Europe or Japan.)

Of course we can quibble about the data. Hurun is based in China, so some may say it has China bias, although it was set up by a British accountant called Rupert Hoogewerf in 1999. And that “Greater China” figure includes Taiwan’s 34 billionaires, although even if you strip them out China is tied with the USA.

And Hurun uses a different methodology to Forbes (which of course doesn’t necessarily mean it’s worse, or better). And the data is based on publicly available information, whereas there are many more merchants and moguls who are either secretive or who simply haven’t listed their companies on the stock markets yet.

What matters is the trajectory. According to Hurun’s count the number of mainland Chinese billionaires is up a staggering 80% since 2013, from 262 to 470.

But none of that detail matters. What matters is the trajectory. According to Hurun’s count the number of mainland Chinese billionaires is up a staggering 80% since 2013, from 262 to 470.

Of those men and women, 66% a truly self made. No less than 93 of the world’s 124 self made women billionaires are Chinese. Chinese meimei are doing it for themselves. Their gege are on a roll too.

And this is genuine rags to riches stuff. It’s not a Donald Trump, “Daddy left me millions to get me started” kind of self made. It’s really starting from scratch. Maoist doctrine, take a hike.

Hurun even breaks the Chinese figures out according to the Chinese horoscope. It appears what year you are born in has little effect on your prospects. Snakes have the most skin in the game, making up 9.8% of Chinese billionaires. (Can you get snakeskin moneybags? Probably…in China.) Capitalist pigs have the fewest snouts in the trough, being 7.1% of the Chinese mega rich.

The growth is phenomenal, whatever beast sign they were born under. China added 90 billionaires to the list in the last year alone, up 19%. This was mainly because their companies were listed on the stock market and data became publicly available. In reality there are probably a great many more still to be revealed.

It’s not just the country level that’s interesting. Of the world’s cities Beijing has also taken the top slot. It’s 100 billionaires have pushed New York into second place, with 95. Even Wall Street, the US capital of…er…capital(ism) can’t keep up with Chinese wealth creation these days.

In fact, of the top 20 cities where billionaires choose to rest their weary heads, five were in China. There are more billionaires in Hangzhou – the lowest ranked of those five at number 9 – than in each of Paris, San Francisco, Tokyo or Los Angeles.

Hangzhou is a city of just 2.5 million people, not far from Shanghai on the east coast of China. Unless you’ve lived in or studied China the chances are you’ve never heard of it.

Shanghai itself, China’s financial capital, ranks fifth equal with London, the world’s biggest financial centre and the favourite stamping ground of all sorts of European and Middle Eastern plutocrats.

The southern Chinese city of Shenzhen, which is close to Hong Kong and home to China’s other stock exchange, closely follows London.

Here’s the top 20 cities according to Hurun. I’ve put China in red, the rest of Asia in green, the Americas in blue and the rest of the world (Europe really) in purple (although my parents would insist that it’s mauve). 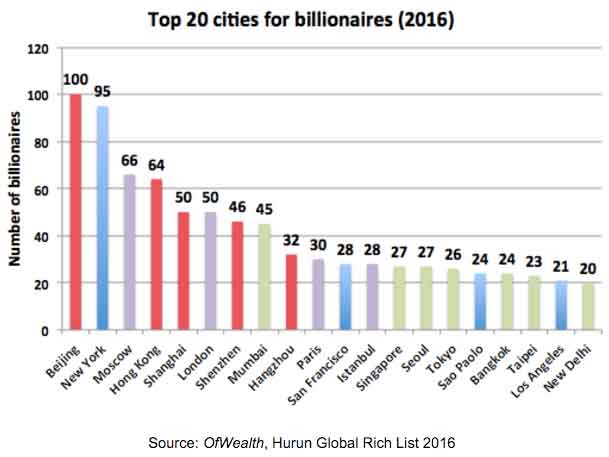 This is just another clear sign of where the money is being made, and I don’t mean printed by the central bank. The “savings glut” – as former Federal Reserve Chairman Ben Bernanke put it during one of his more envious moments – is the capital that this wealth creation is founded on. If there’s one thing that China doesn’t need it’s foreign financial capital.

And here’s another sign of how the world is changing: the share of the world’s top 100 skyscrapers – the very physical embodiment of status and vanity. Take a look at this chart from Visual Capitalist, which goes back to 1930.

Twelve of the top 20 highest skyscraper completions of 2015 were in China. Some would say that’s a sign of a bubble, like the “Dububble” of Dubai before the global financial crisis. Perhaps. But it’s also a sign of new wealth and ambition. Credit too, of course, but you get the point.

China’s fast accumulation of billionaire bigwigs tells us that most Chinese business people “have never had it so good”. Former British prime minister Harold Macmillan, who uttered those words to a doubtful British public in 1957, would have been jealous. Frank Sinatra once asked, in song, “Who wants to be a millionaire?”. The answer is increasingly found in Asia.

For every billionaire there are a handful of centa-millionaires…dozens of deca-millionaires…hundreds of plain old millionaires…thousands of the aspirationally affluent…tens of thousands of what bankers call the “mass affluent”…and millions of ordinary working folk who are still keen to start climbing up the ladder, or at least get their kids on the bottom rung.

The next chart shows how many million people there are per billionaire around the world. The lower the number, the higher the density of the mega monied. 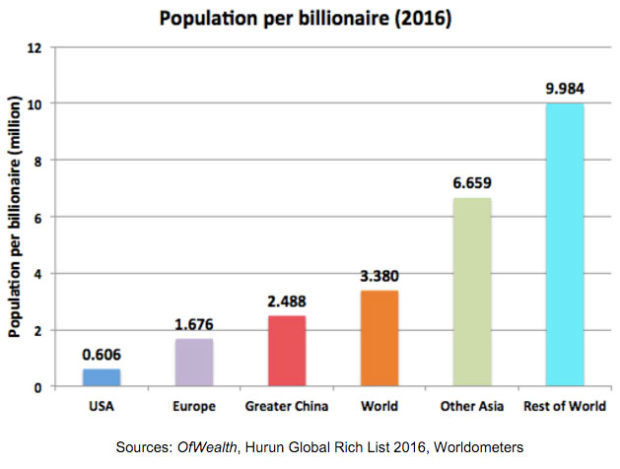 It’s no surprise that the US still stands out, although small, rich countries like Switzerland may wear the actual crown. Europe looks far behind as it includes poor eastern Europe and not just the well-off west. China is catching up to the world average. Other Asia includes huge and relatively poor countries like India, Pakistan and Indonesia. The rest of the world is two thirds dirt poor Africa, and the rest mostly in middle income Latin America.

The amazing thing is that China has only been at it for a couple of decades. Slow reform of communist failings may have started back in 1978, under Deng Xiaoping, but things didn’t really gather steam until the 1990s and since.

I believe a large and simple reason for this is that it’s already stuffed to the gills with people keen to better themselves, given half the chance, as opposed to the sparsely populated USA of the 19th century. The US population was 23 million in 1850, although it grew to 76 million by 1900. China today has over 18 times as many people as that latter figure.

On the other hand Europe has been variously amassing and squandering its wealth for centuries. Global colonisation pulled it up. A never ending series of brutal wars bashed it down again.

The US started to get rich in earnest around 150 years ago, but with its small population it took a long time to reach the top. Arguably it’s now moved on from the “amassing” to the “squandering” stage: buying much more than it produces and spending much more than it can afford. But I digress…

Looking at the top rungs of the wealth ladder, the most prosperous of the plutocrats, tells us much about what’s going on further down. Companies that are based in, or sell much of their wares to emerging markets like China are the ones set to do best in the long run. All investors with an eye for profit should know this.

AsiaChinaDebtEmerging MarketsGDPGoldGovernmentIndiaMarket BubbleMiddle East
Previous ArticleOil and gas may be down, but they’re far from outNext ArticleWhy the establishment wants to ban cash