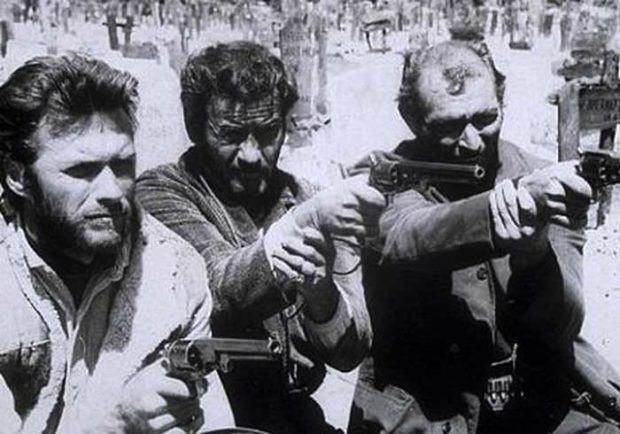 Wherever you live you’ve probably seen some old Western movies. One of my favourites is set during the American Civil War (1861-1865). It ends with a tense three way gun duel over a stash of hidden gold. Two of the three gunmen carry Colt revolvers.  Around 150 years later, famous American gunmaker Colt Defense LLC has just lost a duel with excessive debts and filed for bankruptcy. Greece is duelling with its creditors as well, and someone has to lose. Gold will come riding to the rescue of savvy investors.

Westerns, both good and bad, were a regular feature on the TV screen when I was growing up. One of my favourites is The Good, The Bad and The Ugly. It’s a three hour long epic set during the American Civil War and made in 1966.

The plot revolves around three hardened gunmen played by actors Clint Eastwood, Lee Van Cleef and Eli Wallach. They’re searching for a hidden Confederate gold stash while all the time trying to outwit or kill each other (and avoid the war). The finale of the story is a tense and drawn out three way gun duel, set in a cemetery.

I was reminded of this movie by the announced bankruptcy this week of gunmaker Colt Defense LLC, which has origins dating back to 1836. This 179 year old company, which is named after a young male horse, has been brought low by a common modern disease – too much debt. Now, having matured into an old warhorse, it has finally run out of bucks.

The official line taken by management is that the company failed due to the loss of a key contract supplying the US Army, plus falling sales to the public. But the Wall Street Journal reports that Colt has debts of US$355 million and has been struggling to pay the interest for some time. It’s the old story of too much debt.

The massive size of leveraged global financial markets bears no relation to the economies that underpin them.

It’s also a reminder that the global financial system is a house of cards built on a wobbly table near to an open window. All it will take is a light gust of wind to blow it down once more. The massive size of leveraged global financial markets bears no relation to the economies that underpin them (see here for more, especially the chart).

Colt’s demise in itself isn’t really a big deal. It’s a famous brand but not a huge company on the world stage. But this, the latest fatality in the over indebted trenches of financial engineering, is one of those periodic reminders of the risky state of our debt riddled world.

Expect more failures to follow, especially as and when interest rates start to rise again.

Across the other side of the Atlantic a much bigger debt debacle is taking place. Greece is in a four way duel with the big guns of its three main creditors. These are the International Monetary Fund (IMF), European Central Bank (ECB) and European Union (EU).

Some people are saying this could be a new “Lehman moment”. That refers to the collapse of the Lehman Brothers investment bank in 2008, as the global financial crisis reached its climax.

But the situation in Greece is a much bigger deal than Lehmans. After all we’re talking about a whole country of 11 million souls, not just a medium sized investment bank.

If Greece defaults on its debts, and devalues its currency by leaving the euro, it could set off a wave of turmoil across world bond and stock markets. Bond markets have already been looking wobbly, even without this latest development.

Governments could jump on the bandwagon and demand debt forgiveness, or start considering currency devaluations of their own.

The problem is that Greece could set a precedent for other and larger economies such as Spain and Portugal to head down the same path. Governments could jump on the bandwagon and demand debt forgiveness, or start considering currency devaluations of their own.

The euro is the shared currency introduced in 1999 which is a key plank of the political project to build a European empire. It could be left in tatters.

In any case the currency union was always a flawed idea. And ironically the lack of monetary and fiscal flexibility that it ensures is now a catalyst to weaken the EU. After years of austerity, depression and high unemployment tempers are flaring and there’s an increasing amount of bad blood around (see here and here for more about problems in Europe and with the euro).

Just take a look at this chart from Bloomberg, which shows the increase in recent years of the already huge number of 18 to 34 year olds living with their parents in Greece, Spain and Italy. They simply can’t afford to move out.

The professional investors that dominate financial markets appear to have been slow to shake off their complacency about the situation in Greece and Europe as a whole. They’ve continued to live in a fantasy land where central bank money printing is assumed to solve all ills.

Here at OfWealth we’ve taken a more sceptical view for quite some time, highlighting the high risk of Greece defaulting on its enormous debts (see here for our original take on the Greek situation early last year).

But our view appears to have been in the minority. Until recently almost all I’ve read and heard has taken the line that all would probably be well. It was assumed that the Greek government would cave in to pressure. It would cut pension payments and increase taxes, and further bailout money would flow. Things would get sorted out, for a time at least.

But suddenly, in the past week or two, reality has begun to bite. More and more people are realising that the can may not get kicked down the road again. The Greeks are showing no signs of caving in, and the creditors are looking more and more impatient. For example, last week the IMF negotiating team suddenly pulled out of talks and flew back to Washington.

The Greek Prime Minister, Alexis Tsipras – who was elected on a promise to end austerity – still isn’t pulling any punches. Most recently he’s accused the IMF of “criminal” responsibility for his country’s woes. This is not the conciliatory language of someone who is about to back down.

And Greece has refused to submit new proposals ahead of a key meeting of European finance ministers on Thursday, so it looks increasingly unlikely that a deal will be reached in time to avert default.

As the latest snippets of news hit the newswires Greek markets are going haywire. Greek stocks rose 8% last Thursday on optimism of an impending deal. But since then they have fallen 15% as it has become clear again that the Greek government is in no mood to cave in.

Overall the Greek stock market is down 96% since October 2007, in US dollar terms. After a fall like that you’d expect it to be a screaming bargain.

But as I wrote on 1st April, until it becomes clear whether Greece will default and devalue investors should steer clear. It makes no sense to bet on the vagaries of high stakes political outcomes.

Further sharp price falls are possible, especially if Greek euros are replaced with a new drachma worth, say, 30% to 50% less. This is a political gun fight, and no one should try to stand in the middle.

While the institutions continue to square up to each other, ordinary Greeks are pulling money out the banks…and fast. This chart from the Telegraph shows Greek bank deposits are at a 10 year low and still in free fall. 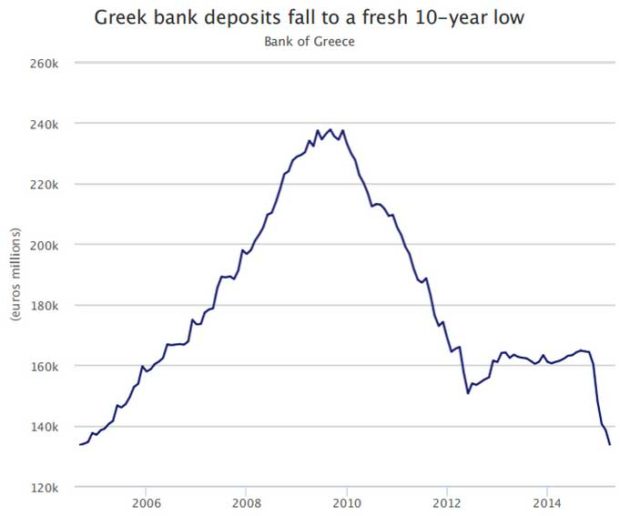 If the Greeks have any sense they’ll be buying physical gold with at least some of that cash, assuming they can get hold of it. And in a drastic situation like this…with the looming threats of bank nationalisation and tight capital controls…some of that gold had better be close at hand.

Practically all developed countries across the world are in reality bankrupt, or heading in that direction.

And it’s not just the Greeks who should own some gold. We all need to. Practically all developed countries across the world are in reality bankrupt, or heading in that direction. But whether or not you live in a developed country the implications of a new major crisis would be global. And of course developing countries often have home grown crises of their own.

Colt’s demise and Greece’s seemingly imminent default are just the latest reminders of the substantial risks in the financial system. Out of all the liquid (easily tradeable) assets, gold provides the best insurance against crisis. You should make sure you have your own gold stash. Fortunately you don’t need to get into gun battles to do it.

Here at OfWealth we recommend you own enough in bullion coins to live on for at least six months, bought from a local coin dealer. That would see you through the worst of an extreme financial crisis in your home country.

As a longer term investment you can allocate up to 20% of your total assets to gold bullion, which can be stored offshore. BullionVault offers the best value service we’ve found to date, with secure vaults in key locations around the world.