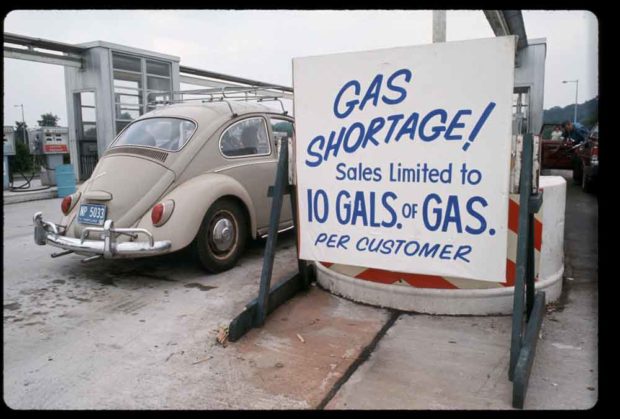 In general, I’m not a big fan of commodity investing. Commodities are highly speculative, meaning massive potential upside but also the prospect of huge losses. In many cases, too much hinges on uncertain government policies. On top of that, a lot of the popular commodity investment vehicles, such as ETFs and ETNs, are structurally flawed. This means they massively underperform the underlying commodities over time.

There seems to be renewed interest in commodity investing these days. Oil has been riding higher, not least due to ongoing / escalating tensions in the Middle East. Industrial metals such as copper and zinc have been on a run as well.

A lot of research likes to exhibit charts like the one below. It shows the relative relationship between the levels of the S&P GSCI commodity index and the S&P 500 index of US stocks. 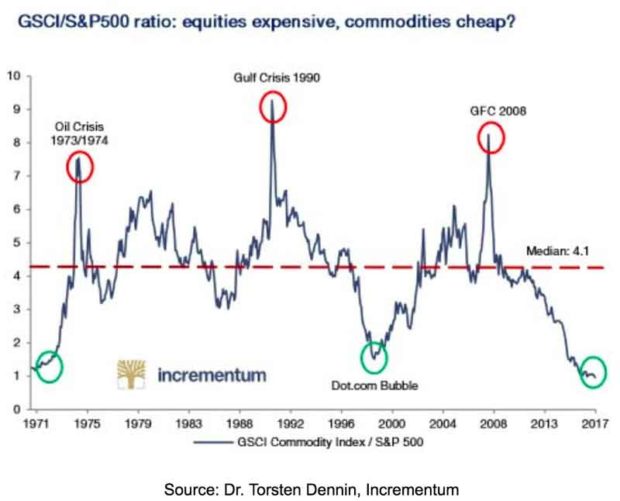 The idea is that when the line is ultra low, such as now, it’s a signal that commodities are cheap relative to stocks. The problem is that this is a ratio. It could just be signalling that stocks are expensive overall. (There are plenty of other flaws in it, but that’s a whole article in itself.)

It’s also hugely simplistic to think of “commodities” as one, homogeneous asset class. There’s little in common between silver, cotton, coffee, cattle, copper, oil, gold, natural gas and all the rest of them. Each has its own unique properties and supply and demand situation.

The only sensible reason that you’d expect them all to go up in price at the same time is in a high inflation environment, which is the same as saying a weak currency environment. Even then, they may not go up in real terms, after adjusting for inflation. (Note: there are reasons that aren’t sensible that can make all commodities to move at once, but I’ll come onto those below.)

But which index should you pick? It turns out, once you scratch the surface, the main commodity indices have major differences.

To illustrate, I took a look at four of the main ones. These are the:

All of these track a wide range of commodities, but there are significant differences. Some are much more weighted to energy (oil & gas) whereas others contain a lot more grains (wheat, corn, soybeans), ‘softs’ (coffee, sugar, cotton), industrial metals (copper, aluminium, zinc, nickel, sometimes tin) or precious metals (gold, silver, sometimes platinum and palladium).

Here’s a chart I put together which shows the big differences, by main sub-category of commodity. 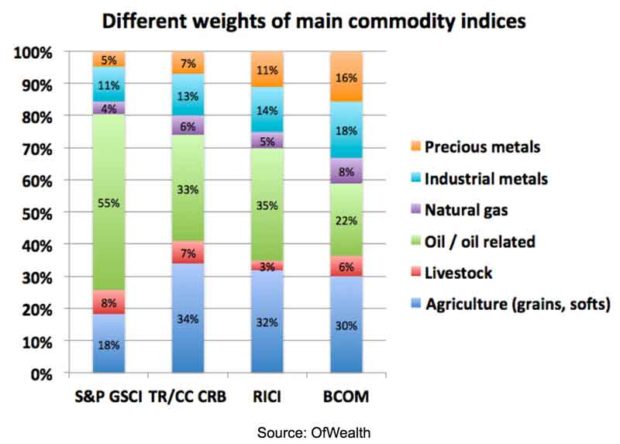 You can see straight away that GSCI is a big outlier on the energy front. It has way more allocation to oil and oil products (such as heating oil and gasoline) than the rest. But there are significant differences between the others as well.

Interestingly, on a side note, none of the four indices include iron ore. This is perhaps surprising, given how much of it’s produced, shipped and used in the world.

According to the Financial Times, it’s because the entire market was on fixed one-year contracts for physical deliveries until 2010. The iron ore market is still centred on physical trades, as opposed to financial futures (although there’s a growing futures market in China). This makes iron ore unsuitable for investment products, which rely on liquid futures markets, a type of short-term financial derivative (more on the problems with that below).

As for what’s been going up or down recently, there are far too many individual commodities for me to look at them all. The most diversified index, RICI, includes 37 different items. But I’ll take a look at some of the main ones, which give a feel for price trends.

Oil has been heading back up, having crashed after the 2008 bubble, recovered, and crashed again in 2014 / 2015. That was after the Saudis jacked up production (either to damage US shale producers or the Russians, depending on who you believe). West Texas Intermediate is currently trading around $71 / barrel and Brent Crude is $78 / barrel.

By the way, I still remember predictions of $200 oil in early 2008 (from analysts at Goldman Sachs, if memory serves). It peaked around $160 in June 2008 before crashing to $58 by the end of the year. It’s one of many episodes that’s made me highly sceptical of “expert” predictions about the direction of commodity prices. 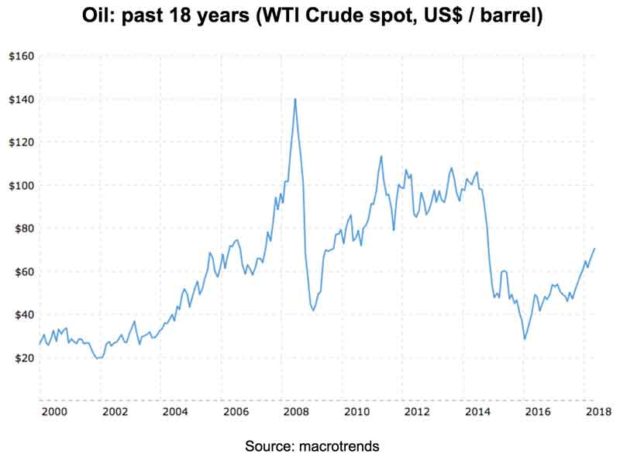 Next up is copper, one of the main industrial metals. This also crashed in 2008, during the financial crisis. It then recovered until 2011, before the price fell by more than half up to the end of 2015. It’s been mostly rising since. 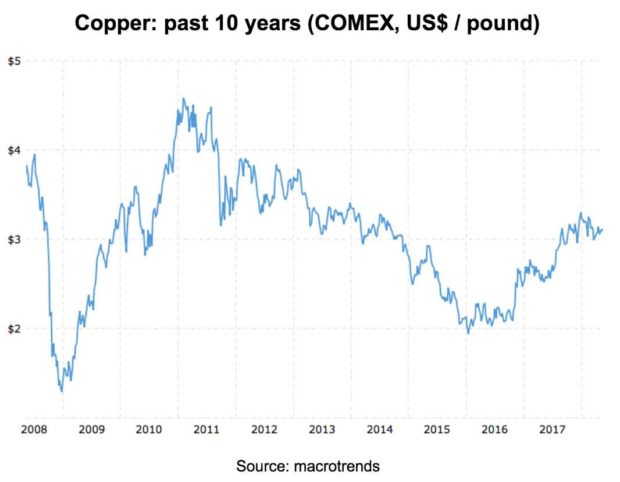 For the grains, I’ve chosen wheat. The price halved during the GFC, as if the world would stop eating bread. That’s as speculators scrambled to dump commodity index funds in the financial panic.

It was a great example of commodity prices being driven by speculative money flows – both on the way up and the way down – instead of the fundamentals of supply and demand. This is definitely something that all commodity investors should be aware of.

Wheat then bounced into 2011, shot up in 2012, and plunged through to 2016 to new lows. Recently, there have been signs of a price recovery (good news for farmers). 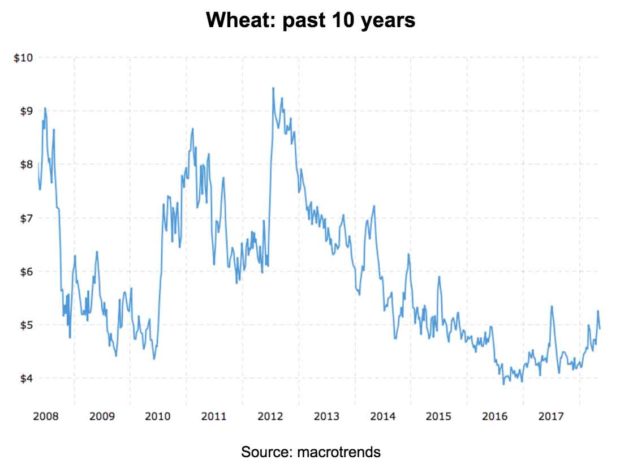 The commodity indices are all very different. Between different types of commodities, the supply and demand dynamics have nothing in common. However, speculative money flows can push all prices up or down, as investors pile into index funds, or dash for the exits.

That more or less sums up why I’m not especially attracted to commodity investment most of the time. I’ve witnessed too many examples of rational analysis and expert predictions turn to dust. One person makes a great case for why oil is heading higher. Another uses solid reasoning to explain why it’s going lower. Too often, it just seems like guesswork.

But there’s another essential factor that all potential commodity investors should be aware of. That’s the dreaded “negative roll yield”.

It’s beyond the scope of this article to explain the full, technical details. Instead, I’ll just give you the high-level explanation, plus a real example that shows how losses can be massive over time.

The problem is that index-tracking ETFs and ETNs do it by way of the futures market, a type of financial derivative. A future is a contract to buy something at a later date at an agreed price.

[Important note: what follows does not apply to gold-backed ETFs such as SPDR Gold Shares (NYSEArca:GLD), which own physical gold stored in high-security vaults.]

Investment funds don’t want to take delivery of physical commodities, so they rollover the futures contracts before they expire. This means they sell the contracts that are close to expiry and buy longer-dated ones. Rinse and repeat.

(Back in the early ‘90s, there was a story at the bank where I used to work. One of the commodity traders once forgot to close a position in copper futures before they expired. Shortly afterwards, a load of trucks full of the real thing turned up in the narrow street outside the office. Oops.)

Futures prices bake in something called “basis” on top of the current “spot” price of the underlying asset. Basis is the difference between the cost of owning an underlying asset (e.g. lost interest on foregone cash deposits invested and any storage costs) less the benefits of owning something directly (e.g. dividends on stocks and coupons on bonds).

In the case of commodity futures, there’s no foregone income yield from owning the future instead of the physical. So basis mainly consists of the cost side, or “cost of carry”.

This is because investors in commodities have a choice. They can either own the physical commodity, paying out cash and taking on storage expenses. Or they can enter into a futures contract, keeping the cash and any interest on it, and avoiding the storage costs. The basis element of the future’s price keeps the economic pros and cons of both situations in balance.

Basis shrinks over time, as a future approaches expiry. As a result, the price of the future gets closer to the spot price, being the price to buy the underlying asset straight away.

It’s actually more complex than that, involving things called “contango” and “backwardation”. But, for most people, that’s all they need to know. Funds that rely on futures contracts have a flawed structure that accumulates losses over time.

An excellent example of this problem is the United States Oil Fund (NYSEArca:USO). It’s an ETF that attempts to track the price of WTI crude oil by way of short-dated futures traded on the NYMEX exchange. Because it doesn’t invest in an income-generating, underlying asset, it pays no dividend. So let’s see how it’s performed.

First, here’s a chart of the WTI spot price since January 2007: 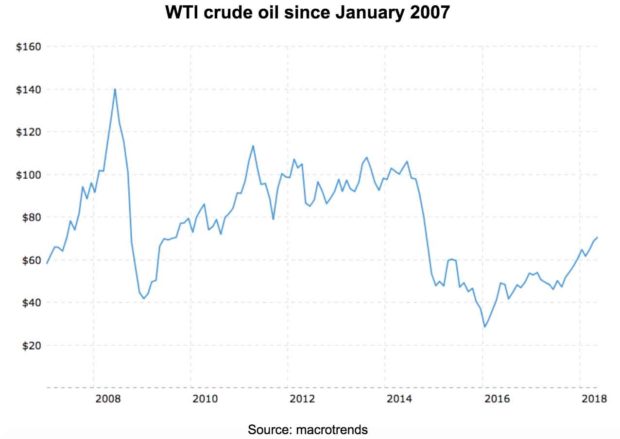 Now let’s look at the price of USO over the exact same period of time: 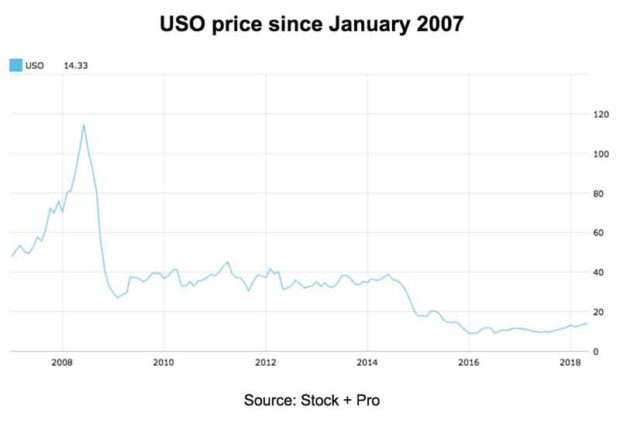 USO’s price has fallen from $47.84 to $14.31. That’s a staggering fall of 70%, at the same time that oil has gone up 21%. This is caused by the negative roll yield of investing via the futures market. Despite this, for some reason, there’s still $2 billion of investor money sunk into this fund.

Bottom line: funds that use futures to bet on commodities are only suitable for short-term bets, not long-term investments. But short-term bets are always hard to win, especially in the volatile and uncertain world of commodities. Personally, I prefer and recommend the kind of solid investments that allow you to sleep well at night.

I’ve looked at some of the pitfalls of commodity investing. This includes the wide variations in commodity indices…that different commodities have little in common and aren’t really an “asset class”…that speculative money flows into index funds can drive all prices up or down in any case…and that popular commodity investment vehicles have flawed structures.

But, notwithstanding all of that, there’s actually a commodity that currently looks like a pretty low-risk bet, if approached correctly. It’s been in a bear market since 2007 and looks like it’s finally found a floor. On top of that, drastically falling supply means the price could rocket soon.

More on that next time…