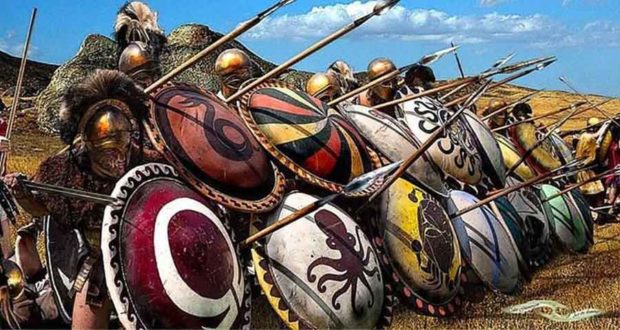 OfWealth has a recommended portfolio allocation for liquid (easily traded), financial investments. As such it excludes physical real estate but currently includes stocks, cash, gold and (specific) bonds. Last week I came across a survey of how wealthy people around the world currently invest their assets. Today I’ll compare my own recommendations with what the world’s wealthy are actually up to.

For those that missed it or want a reminder, you’ll find background on my recommended allocations at these links:

As I’ve written before: “The challenge with any portfolio is to balance two things: opportunities for profit and defensive qualities.” This split is my view of the best way to do that in today’s environment, based on my own analysis and current views.

Last week I came across the World Wealth Report 2017, a newly released piece of work from consultancy Capgemini. The report is meant for wealth managers – the banks and brokers that handle large investment accounts for the world’s wealthy investors. But it has some useful insights for private investors as well.

In particular, the authors had done a survey of thousands of wealthy investors around the world. The part that interested me most was the responses about how they currently have their wealth spread across different types of investment.

Financial industry jargon calls these people “high net worth individuals”, or “HNWIs”. That means anyone that has US$1 million or more of net assets to invest, once you exclude their main home.

When it comes to your own personal situation, you may have much more or much less than that. But it should make little difference to your investment strategy.

As you get wealthier the financial industry will try to sell you more and more “sophisticated” products. That usually just means they’re harder to understand and more expensive. It rarely means you’ll make more net profit than sticking to simpler and cheaper approaches.

In other words, whatever your personal level of wealth, your investment strategy shouldn’t change much. (See “Five things every investor must do” for more guidance.) That’s also why, whether or not your portfolio is already big enough to join the ranks of the “HNWIs”, seeing what those people are up to is relevant.

The survey results are averaged over thousands of people. Individually they’ll have made a wide range of choices about where to park their wealth. But I still think it’s interesting to see what the average wealthy person is doing, at a high level.

That last category is the investment world’s equivalent of Pandora’s box, which, in Greek mythology, contained all the evils of the world. Thus, alternative investments include structured products, hedge funds, foreign currency, derivatives, commodities and private equity. Those are mostly things that private investors should avoid.

Stocks, bonds and cash fit nicely with three of the categories within my own recommended split. When making comparisons I’ll call anything else “other”, which in my case means gold, and in the Capgemini survey’s case means the collection of horrors contained within “alternative investments”.

What the wealthy (currently) do

First, here’s a comparison of the average asset split in different regions. 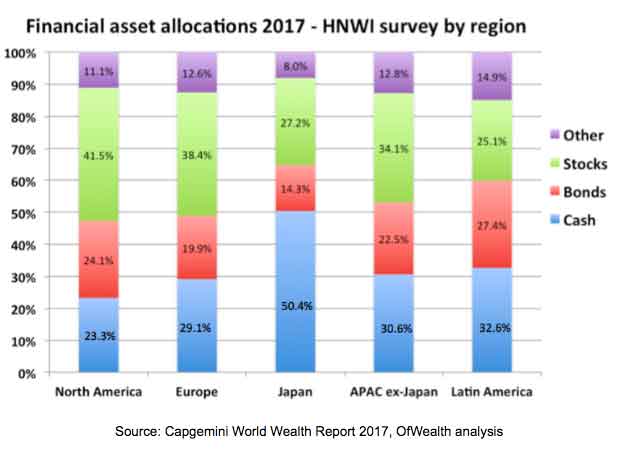 Japan stands out for its very high cash allocation and low bond and stock allocation. But this isn’t that surprising, given it’s been more than a quarter of a century since the stock and real estate bubbles burst in 1990, wiping out huge chunks of Japanese wealth. Since then, Japan has been characterised by ultra low inflation or deflation.

Also, wealthy people in Latin America hold a lot of cash and bonds, and relatively few stocks. This fits with what a Swiss private banker told me years ago about how his Latin American clients were generally risk averse.

Their financial investments were more about having insurance against political and economic turmoil at home than trying to make a big return. It’s not shown here, but they also have the biggest allocation to physical real estate of all the regions – and more than twice the allocation in the USA – presumably because it can’t default or be vaporised by hyperinflation.

Other than that, there’s surprisingly little difference between North America and Europe. A bit more cash in Europe and a bit more in bonds in North America. But otherwise pretty much in line, especially the allocation to stocks. Of course what sits inside the “Other” category could be very different in each region, but in aggregate the amount here is almost the same.

Most readers of the OfWealth Briefing come from North America or Europe. So I thought it would be interesting to compare the survey results with my own earlier recommendation. Here’s what it looks like: 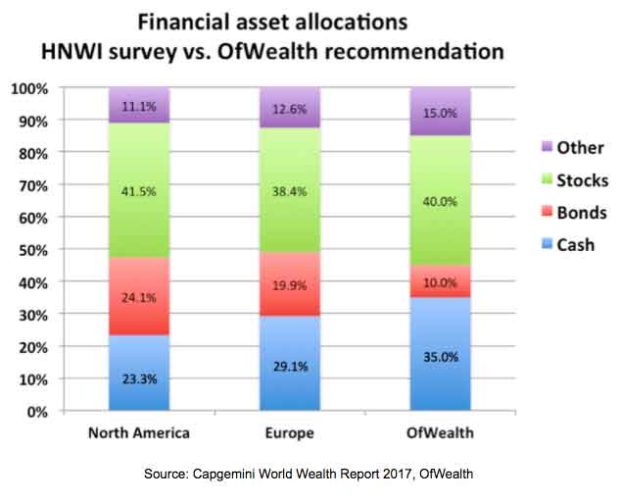 You can see that I’ve gone for a bigger cash holding than the wealthy people surveyed in those two regions, and a smaller allocation to bonds. But cash and bonds are both seen as defensive assets, and if you add the two categories together the differences are minimal.

However, there’s an important thing to note: my 10% allocation to bonds specifically and only includes long dated US treasury bonds. These are included grudgingly, as stock market crash insurance. It’s not because I think they’re great investments in any other situation. Other investors’ bond positions will include all sorts of bonds which don’t even have that single redeeming feature.

In the survey, the combined result for cash and bonds in North America is 47.4% and for Europe it’s 49%, whereas the OfWealth recommendation is 45%. The difference is explained by my larger allocation in the “Other” category, which is the 15% in physical gold.

My recommendation to hold 40% in stocks is both very close to, and pretty much right in between, the survey results in North America and Europe.

That said, the type of stocks included is likely to be quite different. Whereas most people probably have a high weighting to expensive stocks in the US and Europe, I emphasise investing in stocks “only where prices are sensible” (see the table at the top).

As regular readers will know, these days, more than ever, that involves being highly selective and looking all around the globe for the best opportunities. There are always bargains somewhere, it’s just that they’re relatively thin on the ground these days. That goes a large way to explaining why my recommended allocation to stocks is currently only 40%, and not, say, 70%.

It’s interesting to see the differing investment attitudes of wealthy investors in different regions of the world. It’s also a handy reference point to compare the similarities and differences between OfWealth’s recommended portfolio and this survey of what the world’s wealthy is currently up to.

What’s your view on the right investment allocation at this time? How do you have your wealth invested? As always, I’d be interested to hear your views.