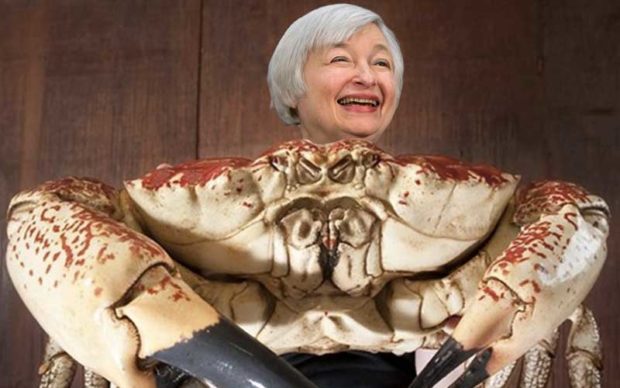 So far this year the US stock market has been moving like a crab. That is, mostly creeping sideways. At 2,063 the S&P 500 index is flat for the year. Most indicators point to the market being relatively expensive, but well below the crazy valuations of the tech bubble that burst in year 2000. However, one important measure is very close to its all time highs last seen during that period of market madness. It’s yet another reason to be cautious about US stocks.

There’s no crystal ball to tell us whether stock prices are going to go up or down in the near future. Bulls can always come up with reasons why profits should rise, pulling stock prices up with them. Bears can always point to the likely threats to profit that are lurking around each corner.

How the investing crowd’s mood may swing is a great unknown. And the world is always full of surprise events that can boost or burst company prospects. Just this week, China’s surprise move to allow its currency the renminbi yuan to devalue a few percent has given the mob something new to worry about.

But there is one thing investors can always do to help with their decision making. And that’s to look at financial measures to see whether it’s likely that they’re getting a good deal or not at current market prices.

We need to cut through the media noise, do our homework, and get down to the fundamentals of valuation.

The idea is to help us understand whether we’re getting a bargain or overpaying. We need to cut through the media noise, do our homework, and get down to the fundamentals of valuation.

These financial measures usually compare the market price of something with one or other financial data point. They’re all a ratio or a percentage of some sort.

Comparing where each measure is now in relation to previous levels, or to levels in similar markets around the world, gives us valuable information when making buying or selling decisions.

Of course, none of these measures is perfect. There are drawbacks and legitimate criticisms of all measures when looked at in isolation. But when everything is pointing the same way then it’s really time to sit up and take notice.

The ratios for the US stock market that we’ve looked at previously are P/E, P/E10, P/B, dividend yield and the Q ratio. You can read more here, here and here.

All of those measures have been saying the same thing. US stocks are expensive at current levels, both in relation to their own history and to other markets around the world. That means a poor outlook for future profits.

Today we’ll add another measure. And in a way it’s flashing an even bigger warning than any of the others. That’s because it’s extremely close to its elevated level during the massive tech driven stock bubble that popped in March 2000. This is the price-to-sales ratio, or P/S.

It’s a pretty simple ratio. It just compares the price of a stock or index with top line company sales. This is the money a company receives from customers when it sells its products or services, before deducting any costs. In company accounts it can also be called turnover or revenue, and sometimes operating income or gross income 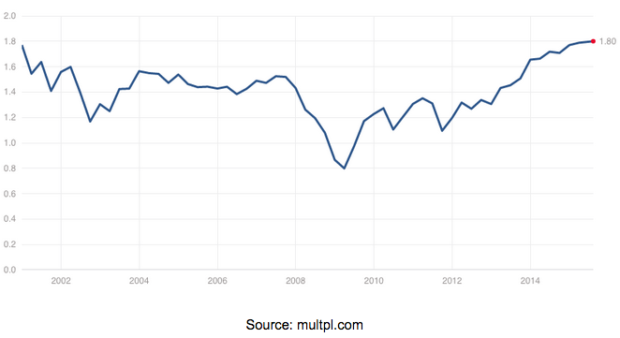 Unfortunately the data doesn’t go back to March 2000, which was the market peak during the tech bubble. But I’ve been able to estimate that it was around 2.0 at that time.

(The estimate was done using the P/S and P/E ratios from December 2000 and comparing them to the index price level to calculate sales and earnings. The difference between these figures is costs. Assuming that little cost cutting was achieved by companies between March 2000 and December 2000, and using the P/E ratio for March – which is available – I could derive March 2000 sales. By comparing that to the March index level I calculated the March P/S estimate).

Put another way today’s price-to-sales ratio for the S&P 500 is down just 10% from the peak of the tech driven stock market bubble in March 2000. 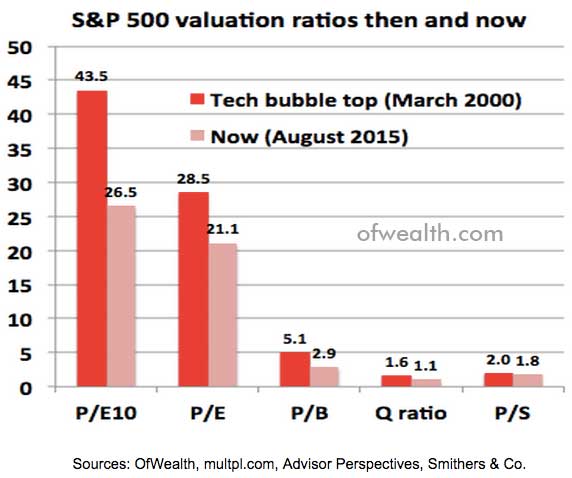 What’s striking is that all of those other measures were at extreme highs that have never been matched before or since. Not even close. (On the other hand they are still at very high levels today relative to all other periods except the tech bubble.)

And yet the price-to-sales ratio is pretty close to it’s bubble high of 15 years ago. How can this be?

The reason is that US corporate net profit margins have expanded significantly. They were 6.4% in December 2000 and my estimates put them at 7% in March of that year, at the market peak. This figure is backed up by a chart I found from Yardeni Research Inc. which shows US net profit margins around 7% at the time.

But, using today’s figures, US profit margins have grown to over 8.5% of top line revenue. In other words, profit margins are 22% above their levels in March 2000 and 33% above the December 2000 level.

As the following chart shows, margins are also at a record high consistent with the 2007 price peak, which was just before the US market last crashed. 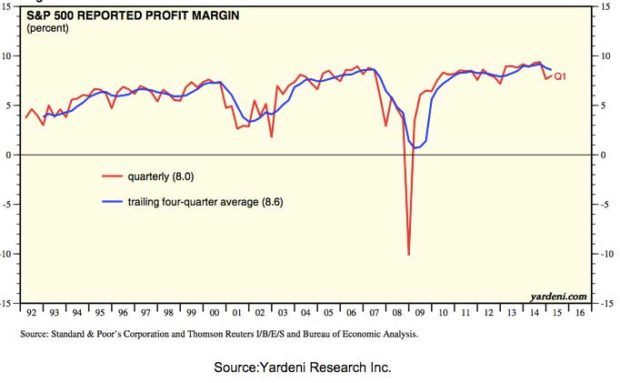 Put in simple terms, to justify the high level of the S&P 500 index’s price-to-sales ratio we need one of the following things to be true:

Does either of those scenarios sound likely? I don’t think so for a couple of reasons.

Firstly fat margins invite new entrants to businesses, which will increase competition. And even if they don’t, existing players will eventually cut prices to gain market share. Either way profits will fall. For this to not happen a large number of US companies would have to operate as monopolies or oligopolies, with high barriers to entry and little price competition. And not just at home but around the world, since around half of S&P 500 revenues come from outside the USA.

I don’t doubt that some industries are over concentrated or protected by regulation. But I also don’t believe capitalism is dead. Competition will arrive – eventually.

Oh, and one other inconvenient thing. Factset reckons that second quarter revenues for S&P 500 companies are down 3.3% year-on-year. In other words US stock market sales are already shrinking, and not growing.

Secondly, many listed US companies have been taking advantage of low interest rates to borrow heavily. And just about everyone expects interest rates to start rising at some point later this year or early next year. If that happens then interest costs will rise and profits will fall. This leaves elevated stock prices exposed.

There’s no way of knowing how far or fast interest rates could rise. But since rates have been at historic lows in recent years it won’t take big increases in rates for the cost of massive debt burdens to start to bite many companies.

Here at OfWealth we’ve now looked at six measures of valuation for the US stock market. These are P/E, P/E10, P/B, dividend yield, Q and now price-to-sales. All of them clearly point to the same conclusion: US stocks are expensive and therefore risky.

I’ll leave you with this final thought. Below is a chart I came across a couple of years ago from renowned Marc Faber’s Gloom, Boom & Doom report. It shows how interest charges rose from under 10% to as high as 60% of US corporate profits the last time interest rates were in a rising cycle, between 1960 and 1987. Need I say more? 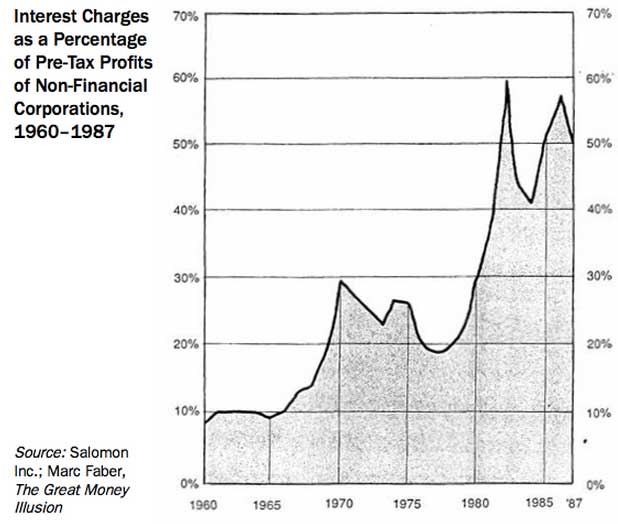