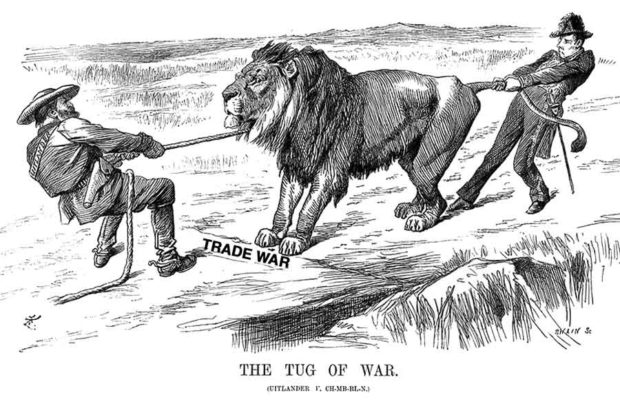 Global stock prices are under pressure as trade wars have come back on the agenda. US actions and rhetoric have escalated and are being met with retaliation from abroad. “China” may be the domestic, political sound bite most used to justify US policy. But more and more countries are getting drawn in. Each time there’s a new round of threats and actions, stocks react…negatively. Where they overreact, there are opportunities.

The Trump administration achieved a great win for US exporters when it cut the US corporate tax rate from 35% to 21% at the end of 2017. Since taxes are merely one of many input costs, lower taxes make exporting companies more competitive in global markets. Before the cut, US corporate tax rates were among the highest in the world, so the cut was long overdue.

However, the escalating war of words and actions over trade tariffs will damage many of those same exporters. Unsurprisingly, when the US slaps tariffs on imports it can expect retaliation from other countries. China, the European Union (still 28 countries), Canada and India are all getting busy with counter-sanctions on US goods.

The picture is a complex one, involving many countries, a highly fluid sequence of events, and dozens…hundreds…perhaps thousands of individual products. But here’s my attempt at a (very) high-level summary of events so far:

Protectionism is a blunt instrument that doesn’t work. It jacks up consumer prices and coddles uncompetitive domestic industries, encouraging an inefficient allocation of capital resources.

I live in Argentina, a country that’s tried protectionism and import-substitution before…many times over many decades (although it’s currently rolling back the most recent extremes). Argentina’s economic history is certainly worthy of study, but definitely not of emulation. It’s an exemplar of how to turn a rich country – which Argentina was a century ago – into an unnecessarily poor one.

The result of protectionism is reduced availability of goods and higher consumer prices. A tiny number of businesses and workers benefit. Everyone else in the country suffers from shortages and higher costs – be they other businesses or millions of ordinary people.

Of course, the US has tried trade protectionism before. Most notably the Smoot-Hawley Tariff Act of 1930. It was a product of the great depression, but most likely also succeeded in deepening the malaise. Global trade collapsed by two-thirds between 1929 and 1933, according to this chart from The Economist (using League of Nations data). 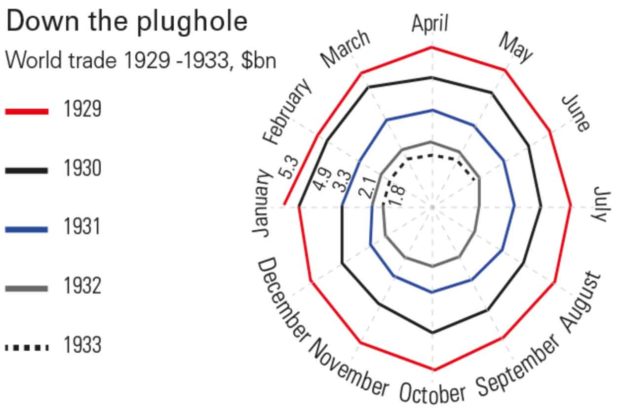 This time around, the opening US step which slapped 25% import tariffs on steel was particularly ill-judged. That’s because almost all of the biggest foreign suppliers of steel to the US market are countries that are usually thought of as allies. 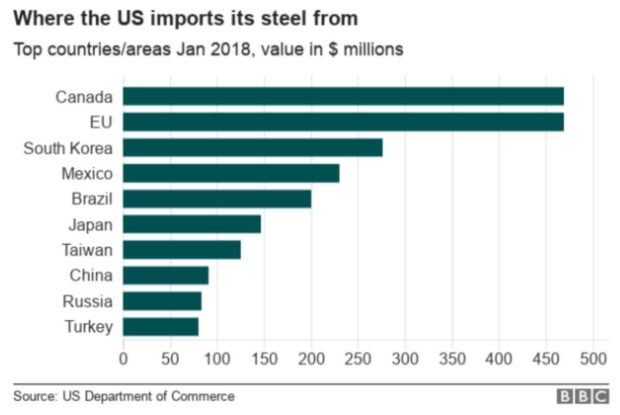 Hence, the rapid US backpedalling at the time, albeit only temporarily. It should be assumed – probably – that the policy was ineptly drawn up for domestic, political reasons. It certainly can’t be based on sound economics, and even less on sensible foreign policy.

As for domestic US politics, there are midterm elections coming up in November. All seats in the House of Representatives are up for grabs, and 35% of the Senate. So it’s probably a good time for a bit of populism, such as the bashing of foreigners, especially the Chinese.

It’s certainly true that the US has a huge and expanding trade deficit with China. In 2017 it imported $500 billion of Chinese goods, and sent $125 billion back. 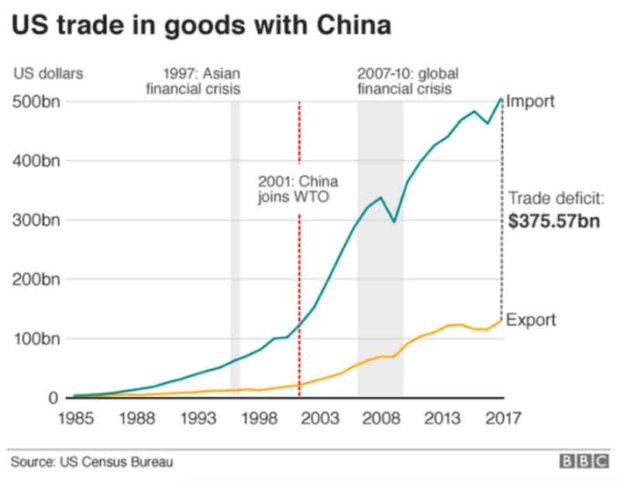 One of the tired accusations made by US politicians is that China is a “currency manipulator”, with an excessively cheap currency that gives its manufacturers an unfair advantage. This was probably a fair assessment until July 2005, when China pegged the renminbi yuan to the US dollar.

But it’s now severely out of date. The yuan is down 22% against the dollar since those days. The following chart shows how many yuan a dollar would buy over the past 20 years (a falling line shows a weakening dollar / strengthening yuan, and vice versa). 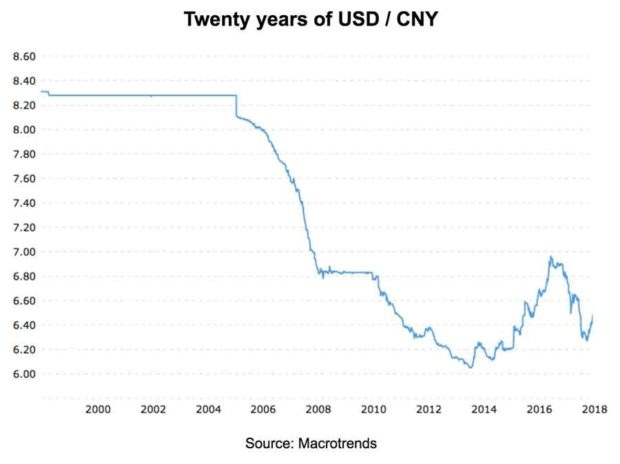 As for that bump in the line between 2013 and 2016 – meaning yuan weakening and dollar strengthening – that was a period when the US dollar was strong against foreign currencies in general. In fact, the dollar strengthened much less against the yuan (+14%) than against the broad trade-weighted dollar index (+36%).

In any case, since then the dollar’s given up most of the gains against the yuan. The case that the yuan is somehow undervalued is a pretty weak one these days.

It should also be remembered that many of those “Chinese” goods come from American-owned factories in China. I read that a promise has been made that the iPhones made by Apple Inc. (NASDAQ:AAPL), all of which come from China, won’t get swept up in the tariffs. Will all products from US-owned factories be exempted? If not, why single out only certain products?

Who has the upper hand?

The US administration may be betting that it can do more damage to China than China can do in retaliation, because of the trade imbalance (the US can put tariffs on more stuff than China can). But no one should forget that China holds another important card if things get really serious…possibly a trump card (to use the old meaning of “trump”).

That’s the $1.2 trillion of US treasury bonds owned by various agencies of the Chinese government (and not including the undoubtedly large amounts controlled by the huge Chinese banks, which are still state-controlled). Those holdings have piled up as a result of the historical trade imbalance, recycling the dollars to fund US government budget deficits (in the same way that “petrodollars” are recycled from places like Saudi Arabia).

With the US budget deficit in rapid expansion mode (is it a trillion yet?)…and the US Federal Reserve now progressively winding down its trillions of dollars of treasury holdings built up during quantitative easing…there’s a huge amount of treasury supply coming onto the market for the foreseeable future. The US government needs a lot of bond buyers to prop it up.

This is where China’s trump card comes into play. It can start dumping its treasury holdings, driving up yields in the process. With treasury yields providing an important reference rate for all sorts of US lending, such as long-dated mortgages, that would be a major drag on the US economy. The Chinese know this. Let’s hope the US administration knows it too.

We’re still a long way from that happening in a big way. But, if the Chinese are pushed too hard then it’s something they can use. Perhaps it would result in financial loss and economic hardship in China too. But, remember, the Chinese leadership doesn’t have to worry about elections.

In the meantime, there’s another way China can respond – by cutting their own corporate tax rates, thus counteracting the negative effect of US tariffs. Chinese corporate tax rates were 33% until 2007, after which they were cut to 25%. US headline rates were 35% until late 2017 and are now 21%. China could potentially match that 21% rate, or even go lower.

All the countries swept up in these trade spats are likely to suffer to some extent, including the US, EU28, Canada, Mexico, India and so on. Global supply lines will adjust, but there may even be some beneficiaries. That’s especially if they can supply substitutes to (e.g.) China of products previously bought from the US.

One thing seems clear. Each time the rhetoric is ramped up…each time new tariffs and counter-tariffs are announced…stocks take a step back. Below is a chart of the MSCI All-Countries World Index (a broad index of developed and emerging market stocks) since the start of December. I’ve added some notes that show how prices have generally fallen when trade tensions have come to the fore. 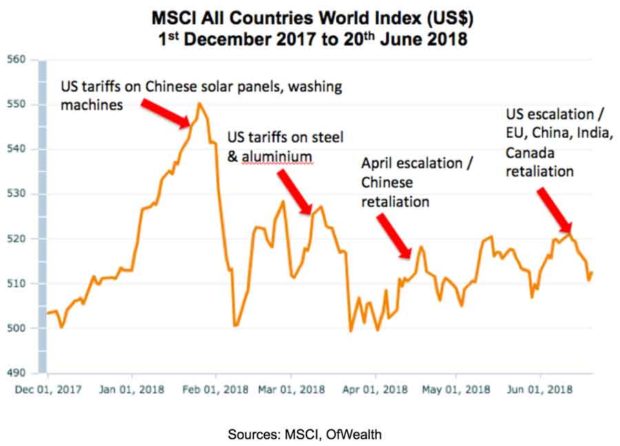 Notwithstanding the negative effects of these trade skirmishes, it’s important to keep them in perspective. Slapping tariffs on products doesn’t mean demand completely evaporates. Everything has its own supply and demand curve, and not all products can be substituted with domestic production (at least, not quickly). Premium, branded products are particularly immune.

Jacking up the price by 25% may only mean volumes sold in the country fall by, say, 10%. For an affected company that sells 20% of its output in the US (say), global sales may only get hit by a couple of points.

In other words, the uncertainty could open up some excellent opportunities to pick up cheap stocks, where prices have overreacted to the news flow…or to fears of potential future measures. The hunt is on…