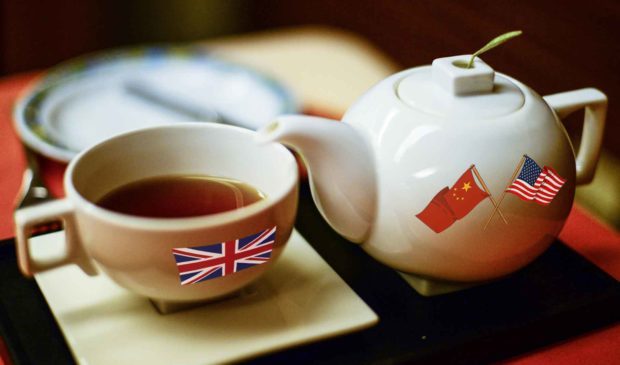 “He sounds like a Peronist.” My Argentine host, who is in his 70s, gave this brief assessment of Donald Trump. It wasn’t meant as a compliment. When it comes to trade, Trump is usually said to want protectionism. That’s something that’s regularly helped the Peronists to screw up Argentina over the past 70 years. But Trumps views look more nuanced. And, oddly, Britain could be the big winner.

Trump says he’s going to make America grow much faster with his economic policies. Maybe, maybe not. But since he’s only been in office for a few days there’s little point is passing judgement.

Mind you, simply on the basis of his brief tenure so far, Trump could soon be in line for a Nobel prize in economics. After all, Barack Obama got a Nobel peace prize in 2009.

That was after less than nine months in the job and having had little time to actually do anything. As it was, Obama’s eight years in office were marked by constant war, albeit far from the homeland. Anyone now hoping for a big boom in America should beware of Nobel prize committees bearing gifts…

Oh, what the hell. Since I’m digressing I’ll do it a little more.

The comparison of Trump to the populist Argentine Peronists wasn’t just about his supposed tendency to trade protectionism. It was also all that stuff in his inauguration speech, and elsewhere, about the lying media, the corrupt establishment and looking after the workers.

Whether or not he had a point, he sounded like Cristina Fernandez de Kirchner, Argentina’s president until December 2015. Her period in office was an economic disaster by any normal standards (e.g. 45% a year price inflation), although the problems were relatively minor compared to a proper Argentine economic crisis (hyperinflation, debt default, massive and sudden currency devaluation…that kind of thing). But if she hadn’t been kicked out then it looked like “next stop Venezuela”, so it was a close run thing.

I can only hope that Trump doesn’t inflict anything like Peronism on the USA. As of now it seems highly unlikely, even if much of his rhetoric has parallels, and if most of the media is convinced that Satan is alive and well and living in the White House. But again, only time will tell.

How about what we do actually know? One thing is that Trump has dumped Asia. Or, more precisely, he’s withdrawn his country from the Trans-Pacific Partnership (TPP), a 12 country trade deal that was awaiting congressional approval. It included the US and a lot of Asian countries (but not China).

He also wants to renegotiate the North American Free Trade Agreement (NAFTA), which has been going since 1994. NAFTA covers trade with Canada and Mexico.

Which is a big deal, since these neighbouring countries are the USA’s biggest export destinations. Canada takes 19% and Mexico takes 16% of its outbound products.

Apart from that there are rumblings of slapping tariffs on goods from China, a supposed “currency manipulator”. (By the way, is any country with a central bank that sets interest rates – especially one prone to quantitative easing – NOT a currency manipulator most or all of the time?)

Of course, if that happens, China will retaliate – as its government has already made clear. Almost 8% of US exports go to China. A lot of that is agricultural produce (soybeans, cotton, corn/maize), plus vehicles and planes.

Any trade war could see China’s American supply lines permanently shift to other parts of the world. For example, Argentina, Russia and certain Central Asian countries have been ramping up agricultural production in recent times, and could most likely replace a lot of US imports to China.

What China won’t do (presumably) is put off American companies from having giant factories in China. But, if the US slaps big tariffs on Chinese imports, I’d put money on US investment banks that are operating in China getting a good spanking.

That includes the likes of Goldman Sachs and Morgan Stanley (of course, you are perfectly entitled to see that as a good thing…). Given that China is probably about half of their Asian businesses these days, that’s enough to hurt.

With his positions on TPP, NAFTA and China it looks, at face value at least, like Trump is an out-and-out protectionist. But maybe he isn’t. It just depends who he’s talking to (or about).

On which note, British Prime Minister Theresa May is set to meet Trump in Washington on Friday – the first foreign leader to visit him in office. There are quite a few reports that both sides are keen to negotiate a trade deal between the US and the UK.

At first sight it seems odd – given the supposedly “special relationship” – that there’s not already a trade deal between these two countries. But the problem is that Britain’s been inside the European Union (EU), and still will be for a little longer.

The EU (supposedly, but still very imperfectly) encourages free trade between its 28 member countries. But it also throws up barriers to trade with countries outside the EU club.

But Britain is heading for the EU exits, following its June referendum vote to leave. While it’s going through the emotional process of negotiating a divorce settlement with the bitter bureaucrats in Brussels, it’s not surprising if the country wants to do a bit of flirting with prospective new partners.

The signs so far are that Trump is amenable. Whereas, say, China and Mexico are supposed to threaten US jobs, trading with a rich (read: high wage) country like the UK is likely to create them. More American products can be sold abroad – even if more British ones get bought at home. If both countries are playing to their respective strengths then it’s win-win.

In that context, let’s get back to the potential trade war between the US and China. And the fact that China has no trade deal with the virtually-impossible-to-negotiate-with EU.

Won’t Britain and China, both on the hunt for new playmates in a Trump/Brexit world, be natural partners in a new bilateral trade agreement? After all, Chinese president Xi Jinping gave a speech recently – at the elite, Swiss, mountain-top gabfest known as Davos – in which he advocated strongly for globalisation and free trade.

If global trade is top of Xi’s agenda, and the US won’t play with China’s toys anymore, won’t he instruct his ministries to look elsewhere? I’d bet he would. And wouldn’t Britain, the 5th largest economy and also keen for new deals, be a logical place to go?

(It has to be said, it’s a weird world where the Chinese president is more pro-trade and globalisation than the American one…)

Hmm, so let’s see. The upshot of “Brexit” and “America first” could actually put Britain – once it’s outside the EU – in pole position for free trade agreements with the world’s two largest economies. Between them, the US and Chinese economies are 40% of the global total.

Surely that would be a good thing for Britain? Wouldn’t it?

Most especially it could be good for British exporters. That sounds like a rich hunting ground for investors.

But there’s no rush.

Brexit won’t happen for a couple of years, and Trump has barely parked his feet under the desk at the oval office. However it’s certainly worth watching what happens.