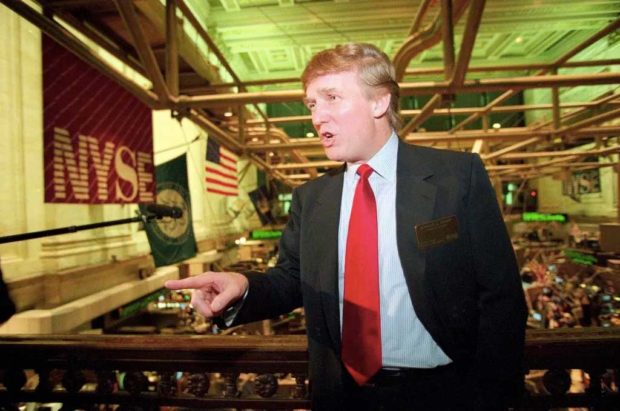 Most traders weren’t expecting Donald Trump to win the US presidential election. Markets are gyrating as bets are hastily adjusted all around the world. One of Trump’s policies, if enacted, could be hugely positive for US stocks. But there are headwinds too. Is Trump good news for US stocks?

A common concern about Donald Trump is that he’s seen as someone who keeps changing his mind. But there are a couple of things that he’s said that have a high probability of happening.

One is a big programme to invest in US infrastructure, which presumably means roads, bridges, railways and the like. Even walls.

Another is to cut taxes, both for individuals and corporations. Potentially this could be a huge deal for US corporate profits, boosting the stock market as well.

Cutting individual income taxes leaves more money in private pockets, which should boost consumer spending. That would help corporate profits and the economy.

But the really big deal for investors is Trump’s plan for corporate taxation. He plans to slash the tax charged on corporate profits from 35% to 15%.

On the face of it that would mean US corporate profits would increase by 31%. Out of each $100 earned, $85 would go to shareholders, instead of $65.

If that happened today, the price-to-earnings ratio (P/E) of the S&P 500 index would fall from its racy 25 to 19, which is still high by historical standards.

The median P/E of US stocks since 1871 has been 14.6. So this would be a fall from 71% above average to 30% above it. Extremely expensive US stocks would suddenly look better value – if not downright cheap. But if there’s also faster future profit growth on the cards then it could be worth owning them again.

As you probably know, I’ve been extremely sceptical about the prospects for US stocks in the past couple of years. For example see “This chart says you should avoid US stocks”. But when conditions change, investors have to change their assumptions too.

So, are US stocks about to get a lot cheaper due to Trump’s plans?

Unfortunately it’s not that simple. There are offsetting factors. Not to mention that, once he’s installed in the Oval Office and faced with budget realities, Trump could water down his tax cutting plans.

But let’s assume for a minute that Trump goes ahead with his promises. After all, both the Senate and House of Representatives are now controlled by the Republican party. It would be strange to see Republicans blocking tax cuts.

Or could they? You see, the flip side of the tax slashing plan is to remove practically all of the “special interest loopholes”. These are the hard fought (and paid for) concessions for tax deductions that favour certain industry sectors. Get rid of them and overall corporate taxes will fall far less than the headline rate suggests.

In any case, companies in the S&P 500 already pay a significantly lower tax rate than the 35% headline. Most analysis I’ve seen puts it around 29%. There are two main reasons for this.

First is because of all those deductions and loopholes which reduce the taxes paid in the US. Second is because large US corporations make a lot of money overseas, where corporate tax rates are usually much lower.

Consider this. The US’s federal corporate tax rate of 35% puts it in a country club that includes these members: The Democratic Republic of Congo, Chad, Argentina, Equatorial Guinea, Zambia, India, France, Brazil, Belgium and Venezuela.

Who would want to be in that club? (And I haven’t even included corporate taxes levied at the individual US state level.)

According to the Tax Foundation, a long established think tank, the worldwide average rate is 22.5%. The UK’s rate is 20%. Even Sweden’s is only 22%.

Companies in the S&P 500 index make about a third of their revenues overseas. Of their foreign profits two thirds come from, and are taxed in, Europe and Asia. Which brings us onto another complication in Trump’s plan.

Most of the countries that matter have (two way) tax treaties with the US, so international corporations don’t end up paying tax twice. Companies from the US only pay US tax if they bring the profits home, meaning they repatriate the cash across the US border. Then they pay US tax on the difference between 35% and whatever lower rate they already paid overseas.

(By the way most other countries don’t do this. Tax is paid based on where the profits are made, not where the parent company comes from.)

This had led to a weird and worsening situation in many large US corporations. If they bring their cash home they face a big tax penalty, so they leave it overseas. Much of it is a dead asset.

That leaves big US companies with a shortage of cash to invest back home, or to pay to shareholders via dividends or stock buybacks.

Often the solution is to borrow money to make up the shortfall. This is why many US corporations simultaneously have huge cash balances (held overseas) and huge debts (borrowed domestically).

Without the weird tax rules they’d have less of both, just netting them off. This is a great example of government rules leading to undesirable consequences.

What happens now to that overseas cash, which is estimated around US$2.7 trillion? The reality is that there are more questions than answers.

Will Trump announce a tax amnesty on past overseas profits, meaning a massive repatriation of most of those trillions of dollars?

If that happens how will the cash be used? Will there be a spurt of investment in business growth? Will there be huge special dividend payments or new stock buyback programmes? Or will most of the money just be used to pay down excess debt, accumulated because of the silly rules of the past?

The thing is, it’s too early to tell. But there are some big negatives that could actually hit US corporate profits, offsetting benefits from changes to the tax rules.

Put together, the proposed tax cuts – also to individuals – and the expected ramp up of infrastructure spending amount to a massive fiscal stimulus package. That’s likely to lead to higher price inflation and higher interest rates (and a larger budget deficit and more government debt, at least at first).

Trump has provided the pin to burst the bubble in bond markets. Bond prices around the world have been falling hard since his win. Prices of long dated US treasury bonds are down 7% since last week (and 16% since their July peak) as bond yields have risen. So much for being “risk free”.

This means borrowing costs are now going up. And US corporations have been borrowing like crazy in recent years. Profits will take a hit when loans have to be refinanced at higher rates in the coming months and years.

Just look at this recent chart from investment bank Societe Generale, which looks at how much leverage US corporations are carrying. Debts are as high, or higher, relative to assets and net assets (equity) as they were during the late ‘90s tech bubble. And we all know how that worked out.

In other words, highly leveraged US corporations are exposed to rising interest rates. But that’s not all that could weigh on US stocks.

You see, when interest rates rise stock investors tend to demand a higher future return. Historically the return has been 4-5% above the yield on 10 year US treasury bonds. The idea is that the extra profit makes up for the extra risk of owning stocks instead of government bonds.

If yields rise, then so will how much stock investors want to make from owning stocks (known in financial lingo as the “cost of equity”). All other things being equal, that would bring down market valuation multiples such as the P/E ratio.

Put this all together you can see there’s a lot of devil in the detail.

On balance I reckon Trump’s plan is likely to be positive for US stocks, through higher profits. But there are going to be major offsetting factors. (I haven’t even touched on the potential for trade wars with China or elsewhere.)

We still don’t know how much he’ll stick to the script. How much of his plan is simply an opening stance in a negotiation? How long until the trade offs begin?

Overall we don’t know yet whether all this will make US stocks attractive to own once more. For now, they’re back on the watchlist but it’s still too early to buy.