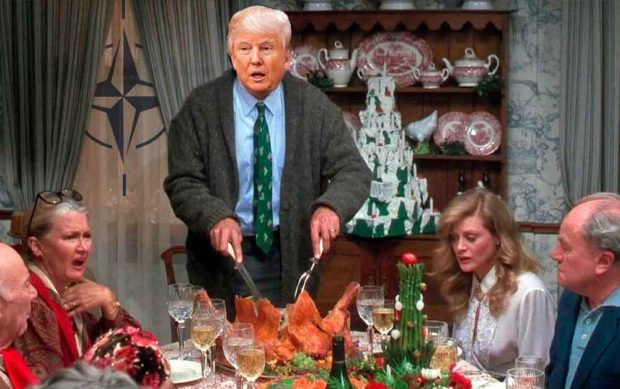 Just last Thursday I highlighted how Turkish stocks were approaching their 2009 lows, in dollar terms. But I also said I thought it was too early to invest, despite apparently cheap valuations. As it turns out, I was right. Turkish stocks fell 15% on Friday and another 11% on Monday. Today I’ll look at what’s going on and what to watch out for in future.

At the end of July, the MSCI Turkey index had a price-to-earnings (P/E) ratio of just 7 and a dividend yield of 4.9%. Ordinarily, that should be enough to get any investor’s attention.

But, as I pointed out last week, there’s still room for things to get worse in Turkey (see “Impolitic politics”). That was just before the huge market falls that happened on Friday and Monday.

First, some basics. Turkey’s land mass is about 15% bigger than Texas. It’s a country of 80 million people that occupies a key strategic position on the world map. It’s the buffer between Europe and the Middle East.

Turkey has land borders with Greece, Bulgaria, Syria, Iraq, Iran, Georgia and Armenia. It’s also across the Black Sea from Russia and Ukraine. Istanbul, it’s largest city by far, straddles the Bosphorus – the only access for ships to the Black Sea, home of the Russian Black Sea naval fleet. 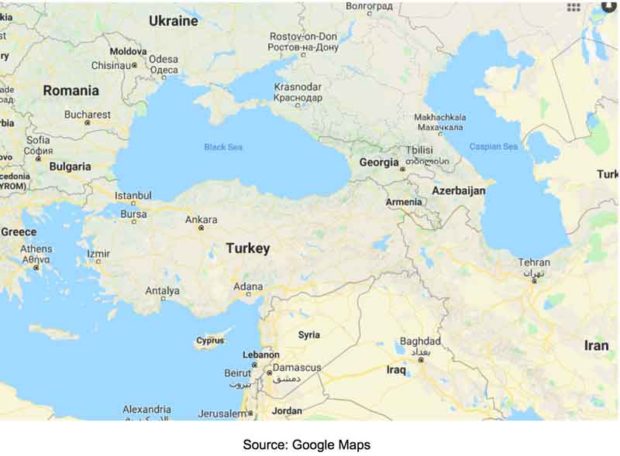 Needless to say, this means Turkey is in a highly strategic location, with various world powers vying for influence. None of Syria, Iraq, Iran and Ukraine have been synonymous with peace and harmony for a long time.

Russia has plenty of influence in Turkey. But so does the West. Turkey is a member of the NATO military alliance, and once had dreams of joining the European Union (a possibility which now seems very remote).

Politically, Turkey is meant to be democratic. But most people seem to think it’s sliding towards autocracy under its president, Reccip Tayip Erdogan. After an attempted coup d’etat in July 2016, by a faction of the armed forces, Erdogan has clamped down hard on opposition voices.

That already makes Turkey a potential powderkeg. Whether that’s due to foreign powers that want it on side, spillover from neighbouring wars or terrorist factions, or domestic tensions. But it’s been playing with fire on the economic front as well.

Twelve years ago, one US dollar bought 1.94 Turkish lira, the local currency. At the beginning of this month that exchange rate had shot up to 4.99, meaning the lira had already lost 61% against the dollar in a dozen years. That’s equivalent to a loss of 7.6% a year (with compounding) – a big headwind for investors.

At the time of writing, the US dollar now buys 6.39 lira. That’s following the currency collapse of the past couple of weeks and is a sudden, further fall of 22%. The total drop in the lira over 12 years works out at 70%.

Since 2004, consumer price inflation has typically oscillated between high single digits and low double digits. But it’s shot up to almost 16% a year in the past couple of months. With the latest sharp drop in the lira, it can be expected to accelerate further.

Turkey’s problem in recent years has been a big trade deficit. The country imports far more than it exports. In the year to June 2018, the trade deficit came in at 9% of GDP, up from 4.5% during the 2017 calendar year. That’s huge for an emerging market country. The deficits vary from year to year, but in general have got worse since 2002, which was the last surplus year. 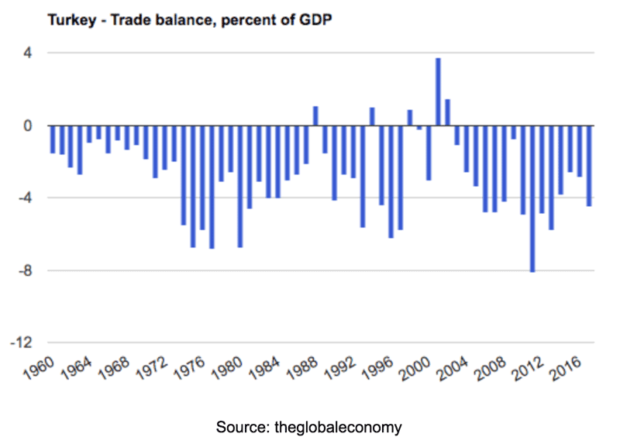 But why the sudden crisis? Why has the lira collapsed now, dragging Turkish stocks and other assets with it?

The final straw is a political falling out with the current US administration. The row centres around Andrew Brunson, an American priest and long-time resident of Turkey. He was jailed two years ago after the government accused him of involvement in the attempted coup. He could face up to 35 years in prison.

When Turkey refused to release Brunson, the US imposed sanctions on two Turkish government ministers. Erdogan didn’t take this well, and tensions escalated, including sanctions on two American officials. The US government then doubled import tariffs on Turkish aluminium and steel. Now Erdogan is calling for a boycott of US electrical products, such as iPhones. He’s referred to US sanctions as a “stab in the back”.

This escalation triggered the market drama. Measured in US dollar terms, Turkish stocks are approaching the deep lows seen during the worst of the global financial crisis in early 2009 (see chart below). 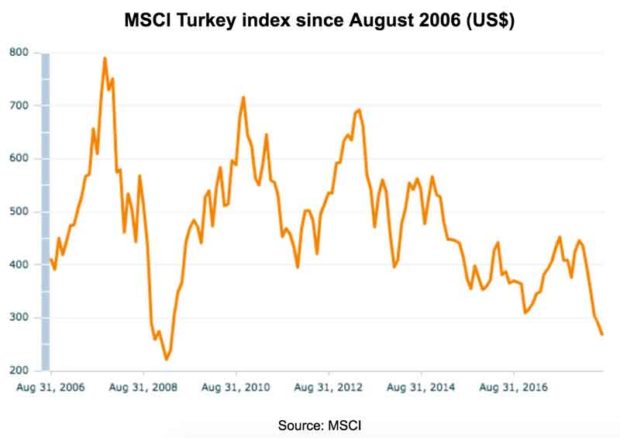 Is this an overreaction? Possibly. No one knows what happens next. However, in a recent interview with CNBC, Jan Dehn, the Head of Research for Ashmore Group, summed it up pretty well:

“Turkey has been working pretty consistently for eight years to screw up its economy, and the sanctions against two ministers were only the straw that broke the camel’s back.”

Dehn also said: “To the extent that sanctions get applied this frivolously across a larger number of countries, ultimately this undermines the soft power of the US. Because you start to undermine the credibility of working with the United States and you start seeing countries turning elsewhere and starting to finance from other sources. So ultimately it’s a little bit like – if you’ll excuse the expression – peeing in your pants to keep warm. You might get a short-term benefit  from it, but in the long-term you probably wish you hadn’t done it.” [Emphasis added.]

Has the US “peed its pants” over Turkey, and unnecessarily made a small issue into a large one? Is the US administration being “frivolous” with sanctions, and undermining the country’s soft power around the world?

Maybe, maybe not. But I note that Sergei Lavrov, the Russian Foreign Minister, is currently visiting Ankara, the Turkish capital. Surely that’s no coincidence. With Erdogan so upset with the US, that must be like pushing at an open door.

Ultimately, the increasingly unstable political alliances are why I remain cautious about investing in Turkey, despite apparently cheap stocks. Erdogan is the president of a country that’s a member of NATO, and as such an ally of the West (at least up until now). But relations seem to be in a downward spiral.

Can you think of any ex-allies of the US who wound up being enemies?

(Incidentally, as a sign of how times can change, we can use “Rambo III”. That movie was made in 1988. It’s the one where Sylvester Stallone’s character single-handedly takes on the entire Soviet army. The end scene is overlaid by the text: “This film is dedicated to the gallant people of Afghanistan.”)

Or how about Iraq’s Saddam Hussein, whom the US supported in the war with Iran (also in the ‘80s), before being removed after he stopped playing ball? (Although it took two wars / Presidents Bush to achieve it.)

Has Erdogan just pointed Turkey down a dangerous path of ongoing confrontation with the US? Could such a path end in (yet another) war or coup attempt?

It’s far too early to make that call. I’m just floating some potential scenarios. A more immediate concern could be the imposition of capital controls in Turkey, potentially leaving investments stranded there.

Either way, I’d like to see the political tensions reduce considerably before dipping a toe into Turkish stocks, despite their cheapness. I recommend you do the same.