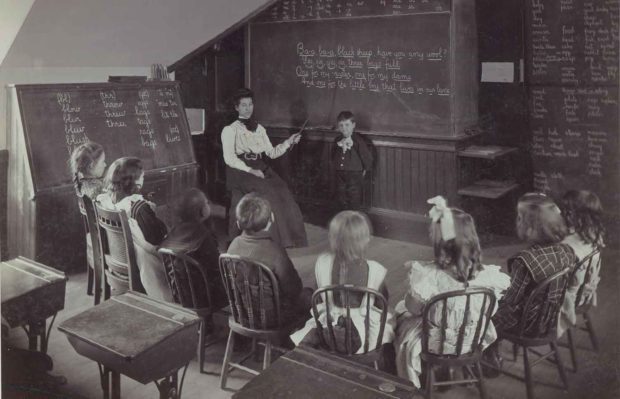 The USA, rightly, has a reputation for massive success in private enterprise. Vast wealth has amassed within its borders, built on optimism, a “can do” attitude, and strong institutions. The country still ranks highly overall for “ease of doing business”. But if you dig a little deeper you find worrying signs that it’s losing its competitive edge. It’s also a reminder for investors that other places are moving up in the world.

I was recently in England and visited an old friend of mine who (still) works in the City of London. As we were catching up and “chewing the fat” he told me about a recent presentation he’d attended by an American venture capitalist.

The investor in question specialised in funding technology startups in Silicon Valley. He had been highly successful over the years, but one of the things he admitted was that he expected most of his investments to be failures. It was just the small number that turned into massive hits that meant his overall results were strong.

My friend and I agreed that this was one of the relative strengths of the US economy. People were willing to risk vast amounts of money backing new businesses whilst accepting the high failure rates required for progress and innovation. This is especially true in the much-hyped technology sector, which is notorious for destroying vast amounts of capital.

Around the same time I read a report by Albert Edwards, a renowned strategist (and perma bear) at investment bank Societe Generale. Edwards was picking apart what he saw as the good and bad bits of Donald Trump’s promised plans.

In the process he highlighted a pretty shocking figure. Once a year the World Bank ranks 190 countries around the world for “Ease of doing business”. Every country is ranked by 10 subcategories, and an overall rank is given as well.

The shocker was that the USA now ranks a surprisingly low 51st for “Starting a business”. That’s down six places from the previous year, and is a catastrophic collapse from 4th place a decade ago.

It’s now one place behind Cote D’Ivoire (Ivory Coast) in Africa. It’s also 49 places behind northern neighbour Canada, which comes in 2nd (after New Zealand and ahead of Hong Kong).

Now, the World Bank can hardly be described as an organisation with an anti-American bias – to put it mildly. So this is the kind of finding that should make anyone sit up and take notice. If it’s getting difficult to start a business in the US then it can’t bode well for the country’s future prosperity. 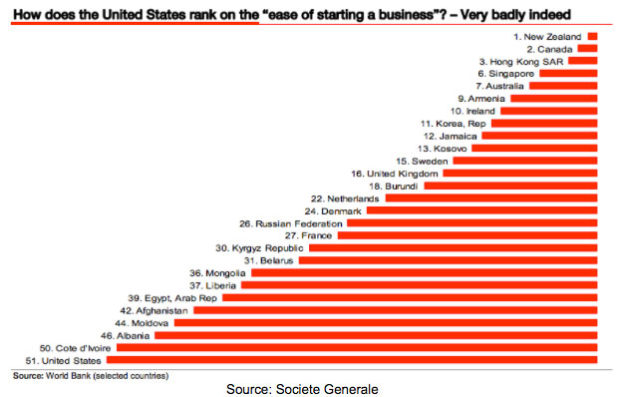 At the same time, Edwards highlighted that the USA’s overall ranking was 8th, a much more respectable result. But this hinges on excellent performance in just two of the ten categories.

The US comes in second equal – with Rwanda and Colombia – for “Getting credit”, behind New Zealand. It’s also ranked 5th for “Resolving insolvency”, behind Finland, Japan, Germany and South Korea.

In other words the US is still a great country for getting leverage and going bust. But clearly you need a lot more than that if you want a successful economy. Easy credit and the ability to walk away from debts will only get you so far. So let’s take a closer look.

That overall ranking of 8th for “Ease of doing business” puts the US just behind 7th placed UK and ahead of Sweden in 9th. In fact “socialist” Sweden ranks better in everything except the two categories where the US excels. It’s just 75th for “Getting credit” and 19th for “Resolving insolvency”.

And that overall 8th ranking for the US has slipped quite a bit. It was 7th the previous year, and 3rd a decade ago.

None of this necessarily means that the US is getting worse in absolute terms. It could just be that other countries are upping their game. But, since the world is a competitive place, relative rankings matter. (Note: One of the biggest improvers is Russia. It’s gone from 112th in 2013 to 40th in 2017.)

So let’s take a quick skip through the other categories. In particular I’ll highlight a few of the surprising countries that are well ahead in each category.

When it comes to “Dealing with construction permits” it comes in at 39th. For comparison, Kazakhstan is 22nd and Vietnam is 24th.

At 36th, the US just beats Peru when it comes to “Registering property”. In this instance Kazakhstan manages 18th and Russia is right up at 9th.

What about “Protecting minority investors” – an essential area if you don’t want to be thought of as a banana republic. The US manages just 41st place, scraping ahead of Belarus, which itself is not much more than a post-Soviet dictatorship. Pakistan manages 27th and Mongolia 26th.

Then there’s the notorious area of “Paying taxes”. Here the US is 36th, in between Mongolia and Spain. Clearly the IRS has some work to do.

A similar result is found for “Trading across borders” where it ranks 35th, in between Moldova and Bosnia & Herzegovina. Even Swaziland manages 31st place.

One area that’s fairly respectable is “Enforcing contracts”, where the US ranks 20th. That’s between Portugal and Hong Kong.

Of course these sorts of rankings aren’t perfect. But given the Washington based source – the World Bank – and the relatively low rankings in at least seven out of ten categories this does not paint a pretty picture.

Even if these rankings only vaguely reflect the reality then the US has a serious problem. It’s losing competitiveness.

Without major steps to resolve this situation then it’s hard to get excited about future economic growth in the US. Making it hard for people to set up and run businesses is surely a recipe for underperformance.

Or maybe it’s all by design – bureaucrats egged on by corporate lobbyists. If you make the regulations and other barriers to entry high enough then big, established corporations get free rein.

Regulations help to defend entrenched oligopolies, while presenting themselves as being for the “greater good”. (On the basis of health and safety, employee rights, quality standards, and so on and so forth.)

I’m still far more positive about the economic prospects of the US than I am for most of Europe, especially countries locked into the deeply dysfunctional euro zone. But there are clear signs that, in many respects, the US has lost its way when it comes to fostering a healthy environment for entrepreneurs.

In any case, currently bubbly US stocks should clearly be avoided. There are more attractive opportunities to be found elsewhere (see here). This is just the latest evidence that investors would do well to cast their net wide in our fast changing world.

All in all, and getting back to the US, it looks like the star student’s grades are slipping. If you were writing a report card for the US business environment it would only need three words:

Can the US be turned around? I’d be interested to hear your thoughts.