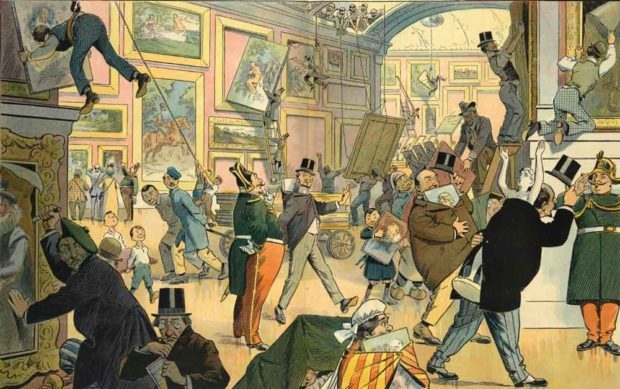 The US stock market has a unique problem. But it’s well hidden in plain sight. We’ve now arrived at the point where the management incentive is to act against shareholder interests. US stock returns are much poorer than they should be as a result. Unless something changes fast, this is a huge problem for investors.

US stocks matter. For a start the stock market is by far the largest in the world. It’s around 45% of total global market value.

That’s way above America’s quarter of global GDP (at market exchange rates). And in the short run, global stock markets often dance to the American market’s tune – especially when there’s a crash.

US stocks are unique in another important way too. Most people generally think it’s a good thing. But it turns out it’s actually a bad thing.

Now let’s be clear here. I’m talking about the stocks of US corporations in aggregate, in particular of large companies such as those within the S&P 500 index.

Individually, of course there are many fine American companies with competent managers that do a great job for their shareholders. But if you lump them all together, and imagine it’s all one giant conglomerate, America Inc. is doing a terrible job. At least it has been in recent years.

You might think that sounds strange, given how well US stocks have performed. After all the S&P 500 index is up 76% in the past five years.

The trouble is that almost three quarters of the price gains are from “multiple expansion”. Namely that the P/E ratio has gone through the roof and is now in bubble territory (see here).

Of that, 2.1% a year was dividends and 1.7% a year was consumer price inflation. That leaves real (above inflation) growth in earnings per share of just 0.7%.

In other words, very little has come from actual growth in the underlying value of the businesses. Practically all of the return has come from dividends and inflation. And, as I’ll show, even most of that 0.7% growth in real EPS is bad “growth”. It’s mainly the indirect result of financial engineering and lining insiders’ pockets.

Valuation multiples such as P/E ratios can’t keep inflating forever. So that part of return is unsustainable from such already high levels.

What really matters for investors, in the long run, is real (above-inflation) returns excluding the multiple (P/E) change. For US stocks this has been dreadful in recent years.

This is a lot lower than in the past. Since 1900 it’s averaged 6%. Remember, that’s returns above inflation but excluding valuation multiple changes.

In other words, it’s the returns that come from the business and the factors that managers have control over – not from external factors such as interest rates, inflation or market manipulation (aka quantitative easing).

Put another way, over 3% a year of annual returns are missing in action. Investors are severely out of pocket in recent years, even if they haven’t noticed as valuation multiples have inflated. But if this continues it will be a disaster for owners of US stocks.

Over 10 years a reduction of 3% a year is a loss of 24%. Twenty years? Down 46%. Thirty years? You’d be looking at 60% of your expected retirement fund would have mysteriously gone missing.

So what’s going on? What explains this mystery?

To get to the bottom of it we need to delve into the world of capital allocation. This is the process by which companies are supposed to use their cash to maximise value creation for shareholders over the long term.

It should be the chief job of the CEO and other senior management. Good capital allocators create massive value for shareholders over time. Just think of Warren Buffett at Berkshire Hathaway. Bad capital allocators – and there are many – waste cash and destroy value.

These are the basic choices for where to put the cash:

I’m going to focus on those last two today, especially on the buybacks (although the others have a part to play in the story). Let’s start with a comparison with other regions.

The following chart looks at payouts to shareholders, from both dividends and buybacks, in the US, European developed markets, Japan and global Emerging Markets. 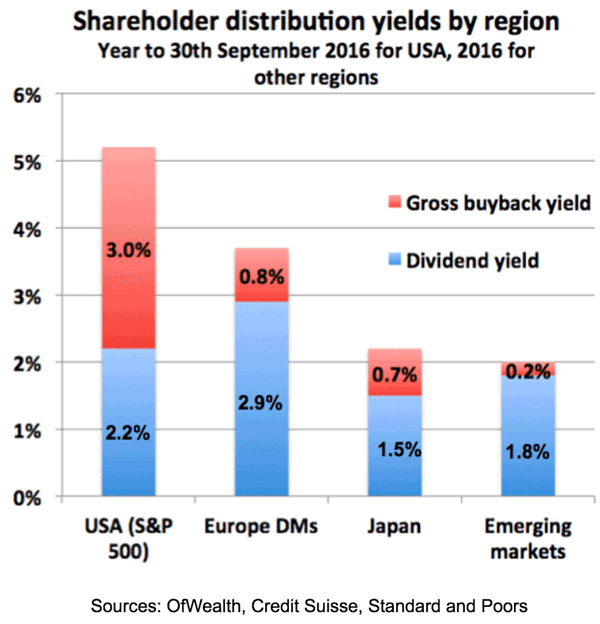 You can see straight away that the total distributions are much larger in the US than other regions in relation to the market value (and notwithstanding eye wateringly high valuation multiples in the US).

In particular, stock buybacks are massive at 3% of market value. This is way more than any other region.

You might think that is good. But it presents a problem or two. Take a look at the next chart which does a similar comparison, but this time looks at payout ratios instead. That’s to say, these distributions as a percentage of company net profits. 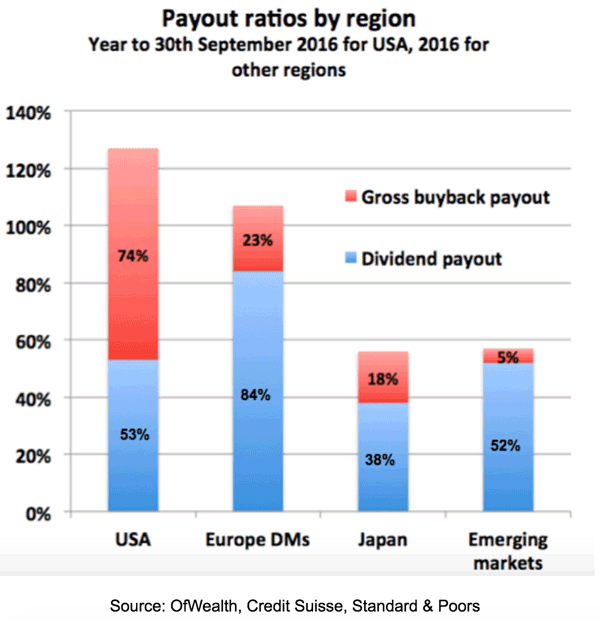 And there’s the rub. US corporations pay out far more cash, in the form of dividends and buybacks alone, than they earn in profits.

In the 12 months to the end of September 2016 the figure was 127% of profits. European companies also pay out more than profits, 109%, but most of it takes the form of dividends. In the US, buybacks are the uniquely bigger destination for cash.

In the meantime, Japanese and Emerging Market corporations pay out just over half of profits in these ways. Which is to say they keep just under half of the cash to reinvest in the businesses. It used to be like that in the US, but something changed after the start of the 1980s and it’s become more and more extreme in recent years.

That’s the problem. If you’re paying out so much money to shareholders there might not be anything left to do anything else. Like keep the business ticking over. Grow earnings. Buy the odd competitor.

Here are two clues to what’s going on. Cash profits are bigger than accounting profits. And companies can borrow money as well.

But in any case, surely a total US shareholder yield of 5.4% is a good thing isn’t it? Add in a bit of earnings inflation – say 2% a year – and shouldn’t shareholders earn about 7.4% a year, before any changes to P/E ratio? Even if there’s no cash left to fund growth?

How can this all be a problem?

The plot thickens – and I’ve missed out a crucial factor. But I’m pretty sure I’ve more or less got to the bottom of it. More next time.