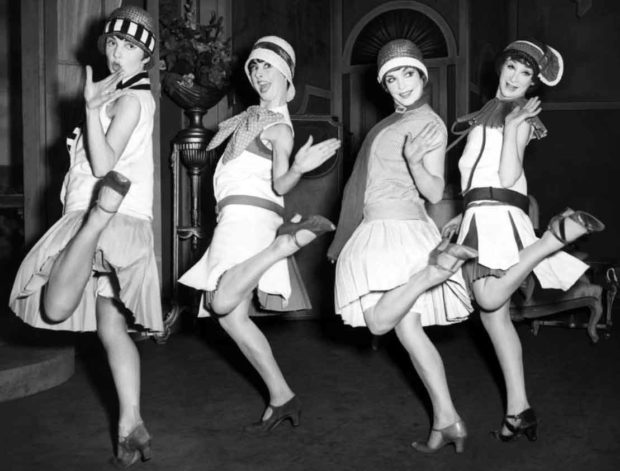 There have been three major bubbles in US stock market history. The biggest ran between 1997 and 2001, caused by a speculative mania centred on technology stocks and a whizzy new thing called the internet. The second largest peaked in September 1929, and was followed by the infamous Wall Street Crash. The third is happening right now and has nearly surpassed 1929.

Let’s begin with a quote:

“The pages that follow tell of the greatest cycle of speculative boom and collapse in modern times – since, in fact, the South Sea Bubble. There is merit in keeping alive the memory of those days. For it is neither public regulation nor the improving moral tone of corporate promoters, brokers, customer’s men, market operators, bankers, and mutual fund managers which prevents these recurrent outbreaks and their aftermath. It is the recollection of how, on some past occasion, illusion replaced reality and people got rimmed.” (Bold added.)

Thus begins the Foreword to the 1975 edition of The Great Crash 1929, a book written by John Kenneth Galbraith and first published in 1954. It’s the classic account of the causes of the infamous stock market mania and subsequent massive bust.

Why is that relevant now? Surely the world has changed, including the businesses in it and the way that investments are traded?

Certainly. But the basic arithmetic of stock returns never changes. In the end, what matters most are company cash profits. Specifically, how much of those profits are reinvested in business growth, which drives capital gains, and how much is paid out as dividends, which is investor income.

Of course, valuation multiples can change substantially in the short to medium term. This leads to another major source of capital gains or losses. But multiples don’t ever rise or fall indefinitely. What goes up must come down, and what goes down is likely to bounce back up.

Put another way, it’s always better to buy stocks when they’re cheap than when they’re expensive. This would be true even if valuation multiples never changed in future. Here’s a simple example to illustrate.

A company pays out 50% of profits as dividends. It reinvests the other 50% in the business, resulting in 5% annual growth in earnings-per-share (EPS).

All things being equal, this makes it clear that buying cheaply is always better than buying expensively. One way that things are more or less equal is when we’re talking about investing in a diverse stock index, such as the S&P 500.

Companies come and go, and new technologies certainly do. But the index remains representative of a wide range of America’s biggest businesses over time. To buy the S&P 500 is to buy into the bulk of future, American corporate profits.

Where are we now?

Which is why the following chart should concern anyone that’s invested in a broad selection of US stocks. It shows the Cyclically Adjusted Price-to-Earnings ratio (CAPE) for the S&P 500 (or earlier equivalent) back to 1881. 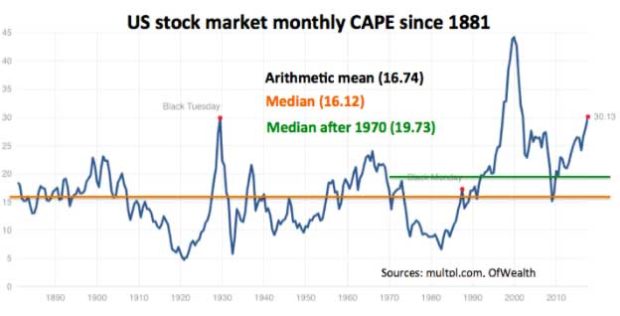 CAPE – also known as the Shiller P/E or the PE10 – is one of the more reliable valuation multiples when it comes to assessing future prospects for investors. That said there are still various criticisms of it, which you’ll find addressed here, along with an explanation of how it’s calculated (and a unique version of CAPE that I’ve developed myself).

What’s clear from the chart is that US stocks look expensive compared with their own history. In fact they look almost “1929 expensive”.

Another way of looking at this is that US stocks have only been more expensive 3% of the time since 1881. And all of that 3% was during the insanity of the tech / dot com bubble between 1997 and 2001.

The following chart shows the same data a different way. It simply takes all the monthly CAPE measures since 1881 and lays them out from left to right from smallest to largest. 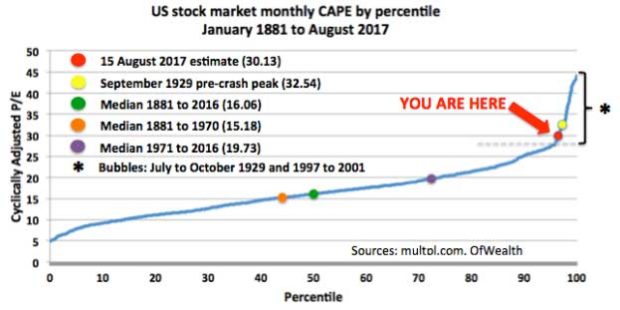 The line goes practically vertical just below where we are today. Put another way, spells at higher levels were few and brief and we’re already in that range. Getting back to the median (mid-point, in green) would require a market fall of 47%. Ouch.

One criticism of CAPE is that too much has changed over time, and distant historical data has little relevance today. Things like accounting rules have evolved, tax laws and so on. One way to highlight this is the lower median for the pre-1971 period (orange dot) and the higher one for the period from 1971 onwards (purple dot).

The market is still expensive

So I’ve done the same chart for the period since 1971. This start point makes sense since the dollar was off the gold standard for the whole period, and there are full bear and bull market cycles. Here’s what it looks like: 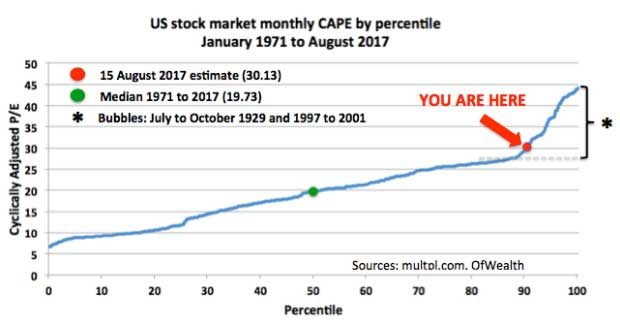 Despite the change, to address the critics of CAPE, I don’t think that looks any more reassuring. The market would still have to fall 35% before it reached the post-1970 median CAPE of 19.73. And, in a potential crash scenario, it could well overshoot to the downside.

It’s also worth noting that the 2007 peak was more than 9% below today’s level. And that time wasn’t exactly lacking exuberance, with the boom in hedge funds and private equity, highly leveraged infrastructure funds and banks, real estate, and a general obsession with “innovation” (ie financial engineering).

The bottom line is this. For anyone to think that US stocks are reasonably priced today they need to justify the same kind of bubbles that occurred in 1929, or the late ‘90s.

My father wasn’t even a gleam in my grandfather’s eye back in 1929. But I was most certainly around during the late ‘90s bubble. There were plenty of “justifications” that I can remember. We lived in a “new paradigm” of “eyeballs”, “portals”, “customer stickiness” and other self-serving claptrap.

Anyone that didn’t buy into it was an old stick in the mud. Out of date and out of touch. Except they weren’t. They turned out to be right all along and the market crashed, eventually.