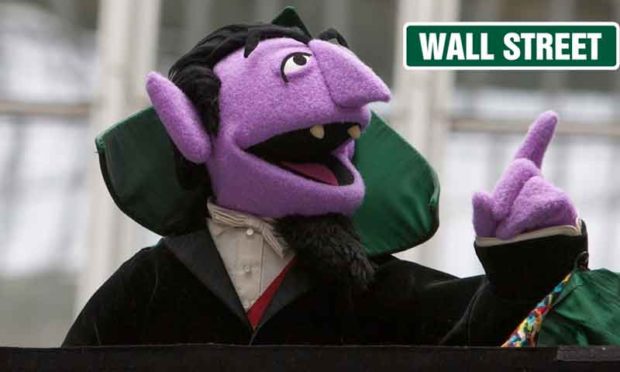 After the spike and correction in the first quarter, US stocks have resumed their grind towards higher ground. Valuations remain elevated, even taking account of corporate tax cuts. Profit projections for the S&P 500 index look excessively optimistic, even more than normal. Investors should be highly selective.

Let’s start with a visual reminder of recent history. Here’s a chart of the S&P 500 index over the past year: 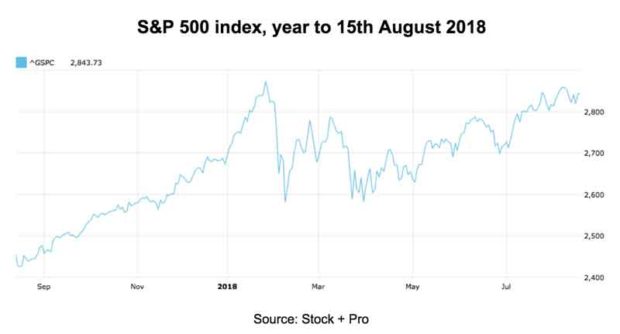 US stocks spiked in January following US tax reforms, specifically the cuts to US corporate taxes. Those cuts are especially beneficial to US exporters, making them more competitive in global markets. For domestic sales, where corporate taxes are just one of many costs of business that get baked into prices, much or all of the profit gains are likely to get competed away over time (although certain monopolists and oligopolists should retain the benefits for longer).

In any case, the index then fell sharply again, not least due to fears over the trade policies of current US administration. Exporters now faced the prospects of retaliatory tariffs in foreign markets. Other businesses with global supply chains or foreign operations could be disrupted too. Trump giveth, Trump taketh away.

But prices have now ground higher again. By 15th August, the S&P 500 was up 5.4% year-to-date. This leaves just about every valuation multiple for the index at a distinctly racy level. But there’s a lot of noise in the numbers, so it’s important to go beyond the headline figures.

Nevertheless, let’s start with some of those headline numbers – the raw data. First, a couple of explanations to make sure it’s clear what’s included.

In the table below, “CAPE” refers to the Cyclically-Adjusted P/E ratio, also known as the Shiller P/E or PE10. This is similar to a normal price-to-earnings (P/E) ratio, except it uses the average of the previous ten years’ earnings, each adjusted (increased) for inflation, as the ‘E’. The idea is to show stock prices relative to a smoothed, average earnings figure (since earnings can be volatile in a given year, or at different points in the business cycle).

Price-to-book (P/B) refers to the relationship between the market capitalisation of a company (total value of all shares at the current price) and the book value reported on the company balance sheet. Book value is assets less liabilities (everything owned less everything owed). It’s also known as net assets or shareholders’ equity.

The data sets I found have different starting points, with CAPE and P/E covering very long periods (since the late 19th century) and P/B and P/S covering relatively short timescales (since 1999 and 2000). But what’s clear is that all are well above their ‘averages’, being the mean (all data points divided by the number of data points) and the median (the value of the middle data point out of all those recorded).

I prefer the median for this kind of analysis, since it’s not skewed by extreme highs and lows. On average, the current readings would have to fall 37% to get back to the median level (although the time periods vary). Such an event would take the S&P 500 index from 2,836 to 1,787.

But let’s take a closer look at the individual measures. Specifically, whether they’re flawed, and how we can (perhaps) make more sense of them.

First, let’s look at P/B. This can be a useful measure for valuing individual companies, but there are a number of problems using it at the index level. These include:

In other words, there’s a lot of noise in P/B. It would take a huge amount of work to get to a meaningful figure for the whole S&P 500 index. Even if that was done, it wouldn’t help with the historical averages. P/B remains a useful tool when valuing certain types of company – such as banks and REITs that report their real estate assets at market value – but it has major issues at the index level.

Next is price-to-sales (P/S). Although this only looks at the relationship between market price and the top line – which means it ignores profit margins – in the past it’s been a surprisingly good indicator of when stocks have been in a bubble (see here).

But, once more, caution is required. US corporate taxes have been cut dramatically, which boosts bottom line profits. That may only be a temporary boost for many companies, as the benefit is competed away. But it may be more or less permanent for others (exporters and oligopolists). So an extreme level of P/S may be higher than previously thought (although it still looks pretty high).

That leaves us with the P/E and CAPE ratios. Can we make sense of those?

Let’s start with the trailing P/E of 24.6. The problem is that most of the “E” happened before the corporate tax reform, since it’s based on earnings in the 12 months to the end of March.

One way to get around this would be to look at the forward P/E, which uses an average of analysts projections for earnings in the coming year. According to S&P itself, this is 16.8. That sounds far more reasonable.

The trouble is that forward P/E ratios are notoriously unreliable beasts. ‘Sell-side’ analysts (employed at investment banks and brokerages) tend to be over optimistic about earnings, and the figures (by definition) exclude negative surprises and one-offs. The actual results almost always end up being far worse, at least at the index level.

Comparing the trailing and forward P/Es makes this clear. The difference implies that earnings will grow 46% year-on-year. Tax cuts, or no tax cuts…this is delusional. It simply won’t happen. But there’s a way we can get closer to working out a more realistic forward P/E.

Hence, if the trailing P/E is 24.6, then a reasonable estimate of the adjusted forward P/E – assuming 13.5% earnings growth – would be 21.7. That’s still high and the index would have to fall 32% to get back to the historical median. In any case, I doubt we’ll see so much profit growth, once all’s said and done (more on that below).

Finally, there’s the CAPE of 32.5. This suffers from the same problem as the trailing P/E, since past earnings don’t take account of the tax cuts. However, if those tax cuts really boosted profits (permanently) by 13.5%, then the CAPE comes down 28.6. In that case, the index would still have to fall 45% to get back to its historical median of 15.7.

Whichever valuation multiple is used, none is perfect. But, even taking account of the flaws of each, the data still points to US stocks trading at very high levels when compared with historical averages.

The US economy seems to be doing pretty well at the moment, and the tax cuts give a boost to profits. But there are plenty of reasons to think that those net earnings won’t grow by anywhere near as much as 13.5%.

The following chart shows the broad US-dollar index since the beginning of 2017. It’s a trade-weighted index against 44 countries (of which 19 use the euro).

You can clearly see how the dollar weakened during most of 2017. That provided a boost to the profits of US companies with substantial overseas earnings. But you can also see how the dollar has strengthened since February this year, which will result in a drag on reported earnings.

Overall, the S&P 500 continues to look pricey, and expectations for corporate profit growth look optimistic. But there’s even more to this story.

Next time I’ll examine why it’s actually a tale of two markets – tech stocks and non-tech stocks. The former has been performing far better than the latter, and many tech stocks are in an indisputable bubble.

Attractively priced stocks can be found in the US market. I’ve recently found some great examples for members of OfWealth 3D Stock Investor.  But bargains are still relatively thin on the ground. For the best, results, it’s as important as ever to be highly selective.

Developed MarketsInvestment StrategyMarket BubbleStocksTaxUSAValuation
Previous ArticleTurkey gets roastedNext ArticleIs (most of) the S&P 500 much cheaper than it looks?