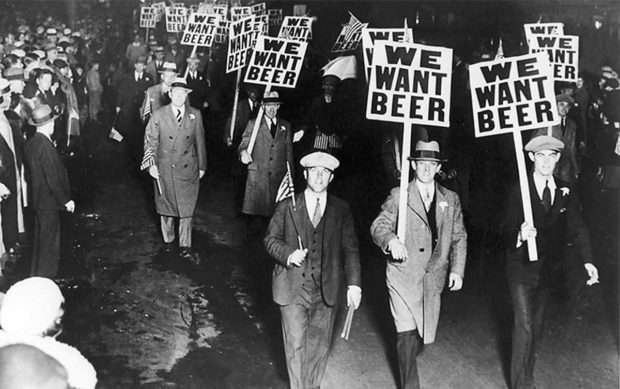 There’s a major problem with banning popular things. It turns ordinary people into criminals. It happened with the prohibition of booze in America between 1920 and 1933. Whether people were toasting their new found wealth from the booming stock market – or drowning their sorrows after the 1929 crash – they had to do it on the sly. Something similar will happen if the authorities try to get rid of cash.

As I explained in Part I, cash is actually more popular than ever. It’s losing share of day-to-day transactions. But more and more ordinary people are turning to it as a place to store and protect a large portion of their wealth.

Those who want to get rid of cash – like Harvard professor Kenneth Rogoff – like to paint it as something used by criminals. But actually it’s an essential tool for honest people to protect themselves from unstable banks and the increasingly desperate policies of bankrupt governments.

The likes of Kenneth Rogoff claim you only need to remove the large bills, like the US$100 variety. But if he gets his way, how long will it be until all cash is phased out and we’re all fenced into the banking system like so many sheep?

Let’s look more closely at what Rogoff has been saying. Consider these quotes from a 9th September interview that Rogoff did with Finanz und Wirtschaft, a Swiss financial newspaper (and my reactions):

(Note: clearly it’s not just in the USA where Rogoff wants to see his ideas adopted. He’s going global, baby! The ego has landed…)

“In most of the advanced countries cash is used and held by people who are engaged in crime and tax evasion.” (Actually, most of it is used for daily transactions and legitimate storage of wealth by people who don’t trust the banks or the government.)

“Of course I don’t pretend that eliminating large bills is somehow going to end human nature and end tax evasion, crime and illegal immigration. But if we can reduce it even a few percent it’s worth doing.” (If it’s going to have so little benefit then why bother? It’s using a sledgehammer to crack a nut. Not to mention that real criminals will just find alternatives for their activities, like foreign currencies.)

“I’ve been working on this topic for more than twenty years.” (It’s his pet project, which makes it even more dubious.)

“What I imagine is that negative rates are important if we have another deep recession, another financial crisis.” (He reveals the genuine motivation for getting rid of cash. It’s nothing to do with criminals.)

Asked about worried pensioners: “…people who are older and are trying to manage their savings probably need to think about diversifying more and having a larger share of stocks than the traditional wisdom was.” (In other words, screw the pensioners. Especially the poorer ones with modest savings and no access to investment advice or stock markets.)

Rogoff is a dangerous man with dangerous ideas. He provides the “respectable” intellectual cover for governments to set up a banking system where they can confiscate your savings at will…

Rogoff is a dangerous man with dangerous ideas. He provides the “respectable” intellectual cover for governments to set up a banking system where they can confiscate your savings at will, via negative interest rates.

He says that cash is a curse. I say that he’s the real curse. He’s just another establishment leech that wants to suck all wealth and freedom from the general populace.

You may think that sounds like I’m coming on too strong. But I have some personal experience of this kind of prohibition, and how it makes ordinary people into criminals.

As you may know I live in Argentina these days. The last government was hugely corrupt and economically incompetent (and was finally kicked out late last year).

Consumer price inflation ended up running at between 30% and 45% a year in recent years, although the government claimed it was more like 10-12%. They even refused to bring in larger currency bills over time, as that would be mean admitting to the inflation problem.

A peso bank deposit would pay, say, 14% a year if you were lucky. So if you deposited pesos in the bank you’d lose around 15% to 25% a year after inflation (let alone taxes).

The obvious solution was to park savings in the much stronger and more reliable US dollar. But the Argentine government didn’t like this, as mass selling of the peso made it even weaker. So they banned purchases of the dollar in 2011.

This immediately created a huge black market for dollars. The heavily manipulated official exchange rate was, say, 8.50 pesos to the dollar. But on the black market you had to pay, say, 13.70 pesos to buy one greenback.

That was a huge disparity. At certain times between 2011 and 2015 people paid up to 75% premium to buy dollars on the black market. But even worse was how they had to do it.

Buying dollars was illegal. But keeping pesos meant a big and guaranteed loss. So ordinary people were forced to be criminals just to protect their savings.

(Note: even though they paid the premium to buy dollars, this has worked out well. The new government freed up the system and the new market rate is about the same as the old black market rate. Yet another demonstration, if needed, that markets work.)

Your average, middle class salaried worker would buy his dollars by going to an illicit money changer in a side street, often made to look like a travel agency (for some reason). It was a kind of “speakeasy”, except the walls were lined with photos of Rome and New York instead of bottles of bourbon, and the product on sale was cash instead of hooch.

If developed countries ever try to restrict physical cash I reckon we’d see something similar happening. People would switch to alternatives. Governments would then restrict those alternatives. Ordinary people would then be forced to break the law just to protect their savings.

But if people started dumping US dollars for foreign currency it would only be a matter of time before foreign currency was banned, or at least heavily restricted. That’s when the black market would take off. Cash smuggling would suddenly become big business.

Another route to safeguarding savings would be to buy gold and silver coins. But again, if people dumped the dull dollar in favour of shiny metals then we’d probably get precious metal prohibition too.

After all the US government has form. Gold ownership was banned in the USA between 1933 and 1974 (until quite recently, in other words).

The war on cash is something we need to keep a wary eye on. As it happens, I don’t think negative interest rates on deposits would stimulate the economy by making everyone spend more. On the contrary, I believe it could make everyone spend less and save more as they try to make up for the lost interest income (or added interest cost).

But that doesn’t mean the policy makers wouldn’t like to give it a try one day, the next time there’s a major recession. They’ve managed to legalise government corruption already, calling it “campaign contributions” and “lobbying”. So why not legalise theft? That is, just so long as it’s the government that’s doing the stealing.

Fortunately there are high profile voices speaking out against Rogoff and other establishment cronies. Jim Grant, the well known market commentator, recently had the following to say about Rogoff’s book “The Curse of Cash”:

“If there is a curse between the covers of this thin, self-satisfied volume, it doesn’t have to do with cash, the title to the contrary notwithstanding. Freedom is rather the subject of the author’s malediction. He’s not against it in principle, only in practice….Government control is not only his preferred position. It is the only position that seems to cross his mind.”

Hear, hear. Well said Mr. Grant. But what can we do about the potential threat of future cash prohibition?

If and when the time comes you may want to look at foreign currencies, at least while you can still get them. But for now I’d recommend making sure you own plenty of gold.

This could either take the form of gold coins, stored closed at hand, or bullion stored in a vault. In the case of bullion it’s best to keep it in a place where it’s out of the reach of potential future confiscation by your government. In other words, go offshore – which simply means outside of your home country. Switzerland or Singapore are both good choices.

If you haven’t already seen my special report on the best ways to invest in gold, you can download it here.

Physical money may or may not be under threat in future. But as the bombardment continues in the war on cash, it pays to be prepared for that eventuality.

Twice a week we help thousands of subscribers who share these goals with our free publication, the
OfWealth Investor Thought Club.

New subscribers will also receive several free special reports as soon as they join up.

BanksCashCurrenciesEconomic CrisisGoldGovernmentSilverUKUSA
Previous ArticleWar on cash: The Curse of Kenneth Rogoff – Part INext Article20 Facts that will change the way you invest