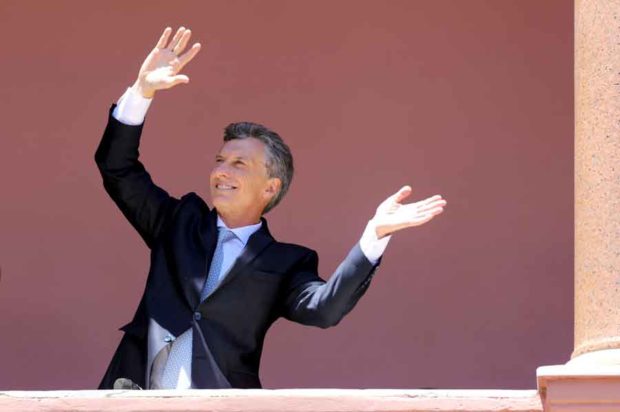 Argentina, a country that’s been beating itself up for at least 70 years, now has a real chance to switch to a more sane trajectory. President Mauricio Macri said that it’s “now or never”, as he launched a massive reform programme earlier in the week. Many vested interests responded with “never”. In the meantime, the currency remains overvalued and the stock market is insanely expensive.

A lot of investors have shown great interest in Argentina over the past year or two. Since I live in Buenos Aires, it makes sense for me to give periodic updates on what’s happening on the ground.

The high level of speculative interest probably explains why the local currency is so overvalued and the stock market is in a bubble. Hot money has poured into financial markets, hoping for some kind of economic miracle that almost certainly won’t (can’t) happen.

Earlier in the year, bond investors showed themselves, yet again, to have taken leave of their senses. That’s when they happily bought a shiny, new Argentine government bond, issued in US dollars and paying an 8% yield.

The catch? It matures in 100 years. Good luck with ever seeing that money again.

This is not to say that things can’t get better in Argentina, or aren’t improving already. Price inflation has halved this year. It should come to “only” 23% for 2017 as a whole. That’s down from 30-35% last year.

(It’s also after more than 40% inflation in 2014 and about 30% in 2015. I can’t be more precise, because the previous government lied blatantly about the actual rates.)

Today situation is better than catastrophic. But it’s still a very long way from acceptable. We’re somewhere between awful and dreadful, but with the prospect of bearable on the horizon.

Developed country central bankers, investors, economists obsess about whether their inflation rates are a quarter or a half percentage point above or below 2%. Meanwhile, the Argentine government’s ambitious (no, really, it actually is) plan is to get annual price inflation into single digit rates (9.9999% or below) in 2019 and beyond.

To that end, the central bank reference interest rate (on something called LEBACs), is running at 27%. The bad news? This draws in speculators, props up the peso, and makes life expensive.

My latest example: yesterday I bought some paper for my kids’ school folders (four blocks, and 376 sheets in all), and a medium sized paper pad for my desk. It cost me the equivalent of US$35.

Oh, and earlier in the week I picked up a jar of Nutella, the chocolate and hazelnut spread. It’s about the only thing my son will eat for breakfast (except fried eggs). It came to US$8 per jar.

The previous government maintained an artificial exchange rate against the US dollar. After they were (just about) kicked out by the electorate in late 2015, the new government quickly allowed the currency to trade at the market rate. (Despite draconian government controls, there was always a real currency market, you just had to know where to look). 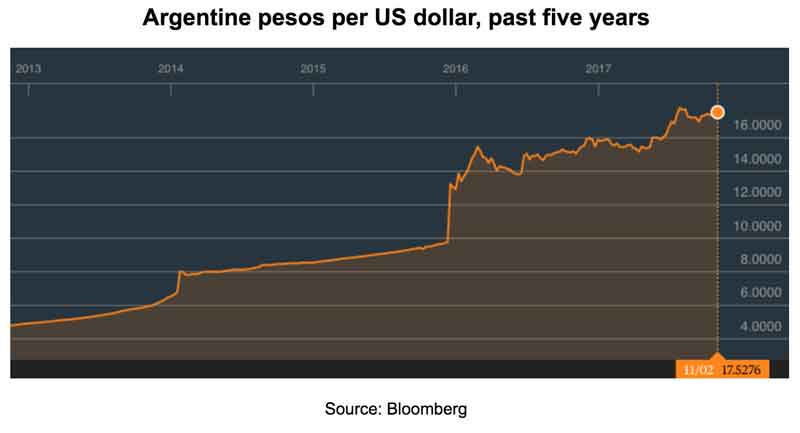 The problem is, peso prices on the street are up dramatically due to the rampant inflation. Measured in pesos, the cost of living has increased about 58% over the past couple of years. That means the dollar cost of living is up 26% in just 24 months or so (158% x 80% = 126%).

To get back to being square, the peso would have to lose 20%. Allow for low rates of price inflation in dollars (as in the US), and therefore add back, say, 5% over two years. Hence my view that the peso needs to fall 15% before it’s back to its natural level.

This should worry investors in Argentine stocks, which are pieces of companies that mostly generate peso profits. The MSCI Argentina index, which is dominated by local banks and utility companies, has a bubbly P/E of 26.

Usually, high inflation environments – with their equally high interest rates – result in low P/E ratios. A good example is when US inflation was in the low-teens between 1979 and 1981, and the P/E of the S&P 500 index went well into single digits. It almost touched 7 in 1979, practically a quarter of today’s level.

But investor interest in the Argentine story is high, and the stock market is tiny. That’s both in relation to the economy and the vast pools of investment capital sloshing around the world.

Argentine stock market capitalisation at the end of September was US$93 billion, according to the World Federation of Exchanges. That’s just 17% of the country’s 2016 GDP of US$545 billion.

However, can a P/E of 26 ever make any sense in this environment?

Without getting into detailed numbers, the rate of real (above inflation) profit growth that’s required in coming years is insanely high to justify this kind of level. I’m talking about 30% or 40% a year real growth (on top of inflation).

Given that most people expect real GDP growth in Argentina of around 3-4% a year in the next couple of years, that level of corporate profit growth seems fanciful. That said, given all the distortions imposed by the previous government, anything’s possible as the mess is unraveled.

But, notwithstanding all of that, things do look set to get better in Argentina.

On Monday, Mauricio Macri, the Argentine president, gave his big “now or never” speech about the need for ambitious reforms. The overall aims are to reduce the government budget deficit (set for 4.2% of GDP this year), and reduce high levels of poverty through private investment and business growth (instead of demagoguery and handouts, the historical favourites).

Macri wants to make major changes to the dysfunctional tax system, cut government waste, reform institutions like the judiciary, take away special pension privileges for legislators and so on, and so forth.

But, for that to be possible, public spending must be cut too, and waste slashed. Macri himself gave the example of the 1,700 employees lurking on the payroll of the Congressional library. (I await the inevitable strike and road block by said workforce.)

Efforts will be made to reduce tax evasion, which is massive. Corporate tax rates will be reduced, as will high “social” taxes on formal employment, a major contributor to the reality that about 30% of workers are informal. In particular, Macri wants the provinces to phase out turnover taxes, which are charged directly as a percentage of top line company sales income.

Many consumption taxes will be increased, on things like tobacco, alcohol and sugary drinks. But taxes on electronic goods and mid-priced cars will be reduced substantially. Taxes on investments and property will be reformed.

Taxation of the self-employed, who are currently penalised by the system, will be made fairer in comparison to the employed. Taxes on certain bank transfers will be reduced (yes, these really exist). The list goes on and on…

There’s no doubt it’s an ambitious plan, although much of it will be phased in over five years. If Macri achieves even half of it then Argentina will be left in much better shape. As confidence builds, economic growth could accelerate.

But, of course, it didn’t take long for the vested interests to get upset.

The governor of Tierra del Fuego thinks his province’s electronics industry is threatened, as its relative tax advantages and protected status are taken away. Competition and lower prices for many millions of Argentines instead of government protected jobs for a few thousand! Shock horror!

From wine country, the governor of Mendoza province is angry about the proposed new 10% consumption tax on vino. Meanwhile, from the sugar producing province of Tucuman, the governor is furious about additional taxes to be loaded onto sugary drinks.

And the unions…well, no surprises there. They don’t really care if there are more jobs or not. Just so long as it remains hard to remove their own members from their posts. Or even to force them to turn up for work. (Absenteeism is very high in Argentina, in both the public and private sectors.)

Argentina’s reforming government has ambitious plans. But it’s not going to be a smooth path on the way to achieving them. What’s more – reforms or no reforms, and given the overvalued peso – investors in Argentine stocks are far too optimistic.

If you want to invest in a little bit of your money in Argentina, then I recommend it for a holiday. After all, it’s springtime here. It’s by the far the best season for a visit. It’s just a pity it’s not cheaper right now…