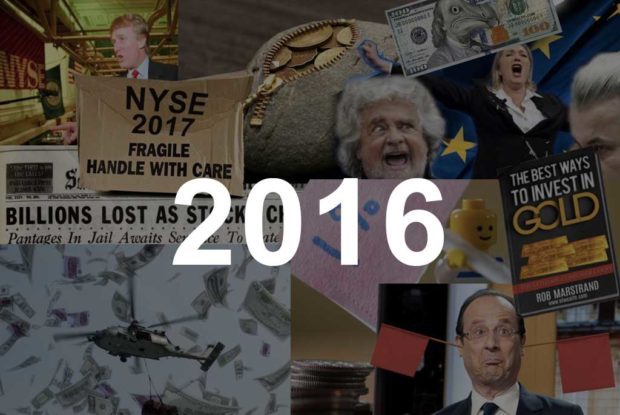 Every year has its twists and turns. But 2016 arguably had more than usual. The political and media establishments are on the back foot in both Europe and the US. Bonds bubbled and are now busting. Gold was up…then down. A few stock markets had stellar years, others not so much. What can investors learn from what happened in 2016?

Some of what I’m about to say may seem obvious. But with investing, as with life in general, it pays to reflect on past events. We can learn from them.

One of the biggest happenings of the year was that a huge crack appeared in the ice shelf otherwise known as the European Union. A massive piece is about to float off into the North Atlantic – politically speaking at least.

Yes, the British voted for “Brexit” in June. Although it will take a few years before the country is independent of Brussels lawmakers. No one knows exactly how it will turn out, and there will be plenty of drama to endure first.

In the meantime, fissures and fractures keep appearing across the European continent. I counted 17 terror attacks in Europe, large and small, through the year. Most were in France, Belgium and Germany. Many blame the recent wave of immigration from the Middle East and North Africa. At least a few dangerous radicals came in amongst the hoards.

As the immigration continues, and many of the EU’s indebted economies remain weak, the political establishment is being challenged in many countries. Such as France, Italy, the Netherlands and Germany – to name a few. Support for new parties, or a surge in support for fringe ones, continues to expand (see here for more).

Across the other side of the Atlantic, in the USA, something truly unusual happened. A non-politician called Donald Trump not only won the Republican nomination to run for president, but then won the actual race for the White House…against the ultimate political insider, Hillary Clinton.

Whatever you happen to think of either of them, this was a remarkable turn of events. Foreign leaders and other senior politicians have been busy eating their words. Early in Trump’s campaign most of them were quick to dismiss, or insult, the man that’s now about to become the most powerful person on Earth.

In the meantime, the Middle East has continued to be plagued by conflict. The wars in Syria and Iraq have had so many players involved – both local and international – that most of them don’t even seem to know which side they are on. And Saudi Arabia continues its offensives in Yemen.

Latin America had its share of action too. Brazil impeached its president, Dilma Rousseff, and replaced her with someone that’s supposed to be more market friendly, Michel Temer. That said, the foul odour of corruption is already haunting him.

Argentines finally got fed up with their populist government, led by Cristina Fernandez de Kirchner, at the very end of 2015. The new, and generally more sane government of Mauricio Macri is doing a decent job of rolling back the worst elements of economic incompetence that it inherited.

At the current monthly rate, inflation is running at around 20% a year – down from 45% – and still falling. But the country remained in recession during the year, and the finance minister has just been fired.

Oh, and China didn’t have an economic or financial meltdown. Again. People have been confidently predicting disaster ever since I started learning about China’s markets and economy 15 years ago. Once again the country got through the year relatively unscathed.

There was a huge bond bubble, as yields reached all-time (literally) lows in the middle of the year. Trillions of dollars worth of bonds in Europe traded with negative yields, despite the obvious stupidity of buying something with a guaranteed negative return.

US bond yields also touched new lows. A 10 year US treasury bond yielded just 1.37% by 5th July. It’s now jumped up to 2.54%, and bond investors have had a shock as bond prices have collapsed. 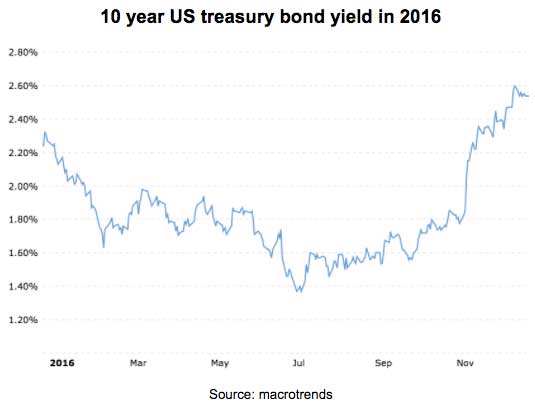 That’s the basic story for bonds on both sides of the Atlantic in 2016. Bubble…followed by massive bubble…then partial bust. But yields are still low, inflation is climbing again, and bonds are still a risky prospect as a result (see here for more).

Stock markets were more varied. Sure, they all fell pretty hard in January. But then they found their own distinct paths.

European stocks went sideways, ending the year down a few percent (at least in US dollar terms). It’s hard to get excited about Europe, given its political uncertainties, high debts and mostly sclerotic growth.

US stocks started the year expensive, but still went up a little in price (around 5%). Then Trump won the election – with promises of big tax cuts – and they took another leg up. As I write the S&P 500 has gained 11% in 2016.

The catch? US stocks are now trading in bubble territory. Everything is priced for perfection. Here’s a chart I used last week that shows how extreme things have become (you can see the full explanation and analysis here).

Emerging market stocks did well until the latter part of the year. The MSCI Emerging Markets index was up 18% by early September. But then it was hit by rising bond yields, a strong dollar, and the flip side of the Trump rally in US stocks. As I write it’s still up 6.5%. Respectable, but not spectacular.

But of course there’s a big mixed bag in there. Some markets, such as Russia, rocketed. Others, such as India, floundered.

It’s been working well, but they’re still cheap. Despite gaining 46% in 2016, measured in US dollars, the MSCI Russia index had a P/E of just 8 at the end of November.

At the same time I’ve been wary about India (see here). The economy has been growing strongly (over 7% a year), company profits are up, but stocks have been expensive.

Then there’s gold, something which everyone should own for the long haul (see here). It had an excellent start to the year, after a multi-year bear market. By July it was up 29% in US dollar terms. But since then it’s fallen back for just a 6% gain over 2016 as a whole.

A reader, Rodney L., wrote in asking why it had fallen, and whether this was due to market manipulation by the US Federal Reserve.

Personally I don’t think it’s the Fed, or if it is it would only work for a short time. The biggest forces in the global physical gold market are found in China, India and the Middle East.

But of course the paper speculators in NY and London have a huge short term influence. And ETF investors can pull their money at short notice. As bond yields have risen, especially real yields (the yield above expected inflation), gold becomes relatively less attractive for some investors.

And don’t forget the US dollar was extremely strong in 2016. Gold’s dollar price reflects the flip side of that equation. On the other hand, British investors in gold, who saw the pound fall sharply after the Brexit vote, have done very nicely.

That’s my snapshot of 2016. Obviously there’s a huge amount more I could say about the past year. But in the end the lessons of 2016 are the same as always:

And next year? Well, we can’t possibly know what 2017 will bring. There are no crystal balls in this game. But next time I’ll take a closer look at the risks and opportunities as we welcome in the new year.