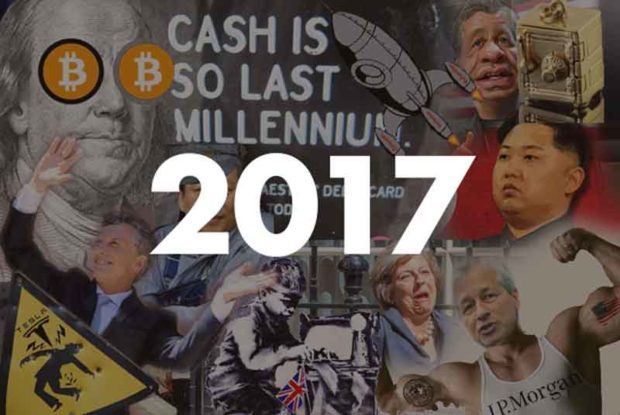 The year 2017 of the Gregorian calendar is creaking to a close. Most mainstream investments did well in the year – across stocks, bonds, gold and real estate. But many assets now look bubbly. In fact, 2017 may go down in history for unleashing one of the biggest financial bubbles ever seen. As well as looking at individual asset classes, I examine how my recommended portfolio allocation has performed.

In the US, the political and media storm about all things Russian got into full swing. In the UK, the Brexit negotiation saga keeps journalists busy at every twist and turn.

The rest of the European Union managed to hold itself together, for now. The rulers of Saudi Arabia purged their competition in an “anti-corruption” clamp down. Things started to calm down in Syria.

Tensions mounted on the Korean peninsula, as rockets were launched and nuclear bombs were tested. The North Korean leader (“little rocket man”) traded personal insults with the American one (“mentally deranged dotard”).

Despite worries about the fast increase of corporate debt levels, China didn’t have a financial crisis. People have been predicting a crisis of some sort in China for at least 15 years. But still nothing has happened, yet.

There was enough going on that you’d think markets might get nervous. But no, 2017 was instead unusually steady, all things considered.

US stocks, which were already unusually expensive when the year started, enjoyed an abnormally smooth ride to an even higher plane. The VIX index of the implied volatility of S&P 500 options reached a new record low, indicating little concern for future risk (see “Are US traders taking record levels of valium?”).

Although US stocks had a strong year, they actually underperformed most other country markets. Here’s a summary of the price moves of some of the main MSCI indices year-to-date, measured in US dollars. 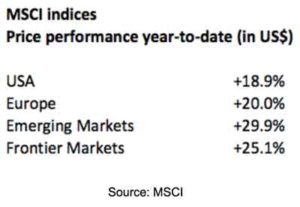 The US market remains expensive by historical standards, as shown by this chart of the cyclically-adjusted price-to-earnings ratio (CAPE). 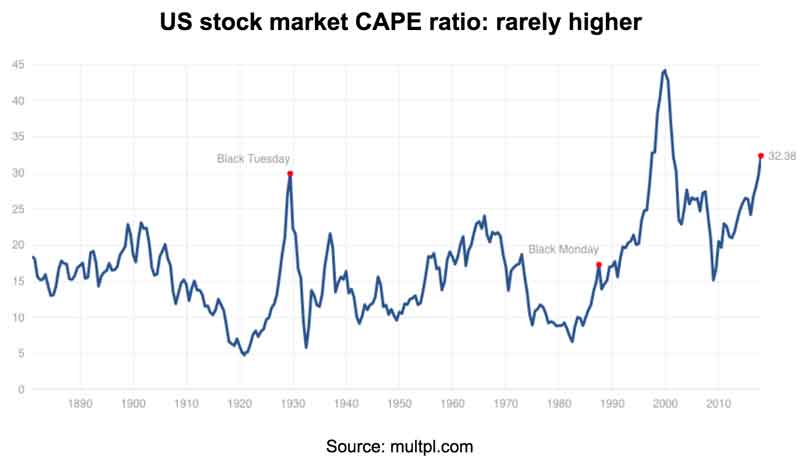 Therefore, in a sense, the stock markets that outperformed the US have merely been playing catch up. 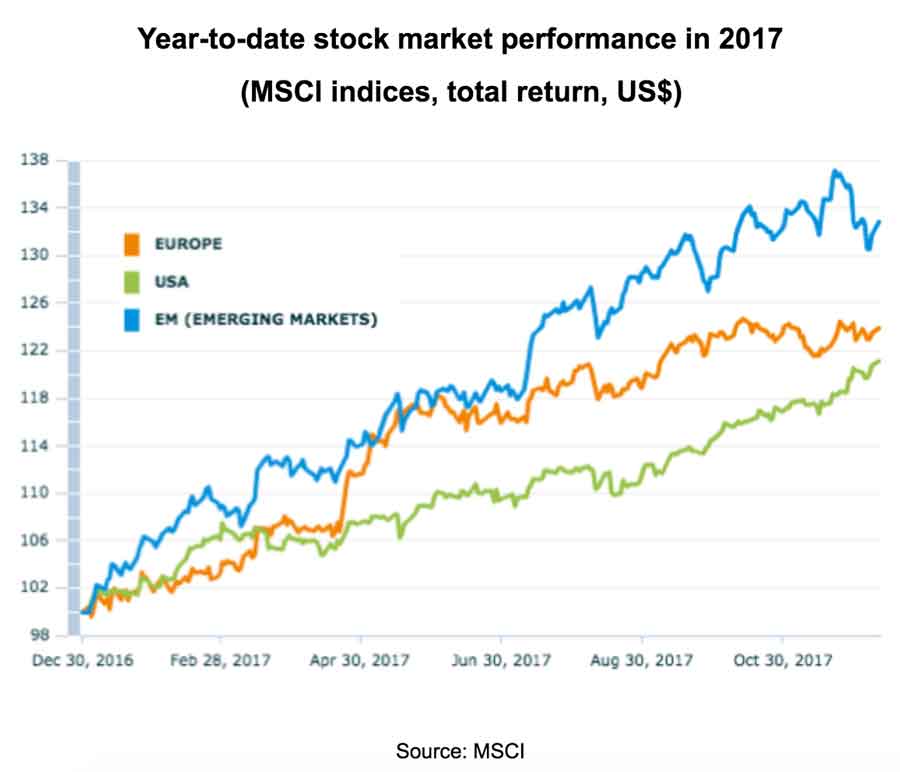 Part of the reason non-US stocks came out ahead, when measured in US dollars, was that the dollar lost ground. The US dollar broad index, which is trade weighted against 26 other currencies, fell 7%. In particular, the dollar lost 10.5% against the euro.

Other stock markets mostly remain substantially cheaper than the US. Here’s a summary of some P/E ratios: 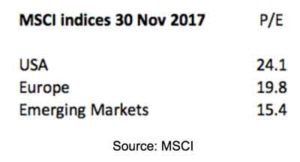 Which country stock market had the best year of all? This appears to be Argentina. The MSCI Argentina index rose a staggering 75%, in US dollar terms.

With inflation still running at around 23% and the Argentine peso overvalued by 15-20%, the current P/E ratio of 19 looks absurd (at least to me, and I live in Buenos Aires). When US inflation was in the teens in the late 1970s / early 1980s, the US stocks market P/E was firmly in single digits.

The Argentine government is taking many sensible steps to make the economy more normal, or at least less bizarre. But the country has many decades of mismanagement to overcome, and one glance at the following chart suggests that Argentine stocks could give investors a nasty surprise in future. 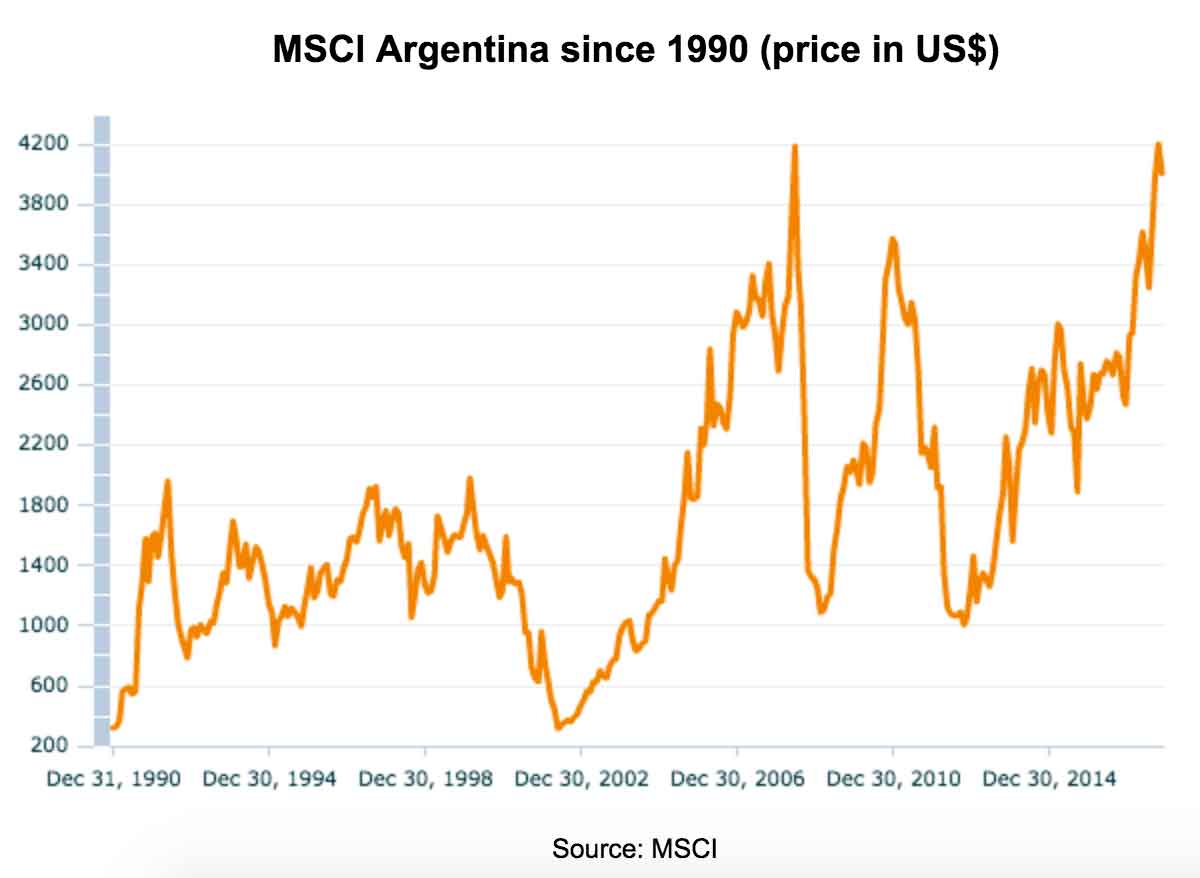 Moving away from stocks, most bonds had a good year too, as yields fell. Despite the already depressed yields at the end of 2016, they fell further. Quantitative easing – printing money to prop up assets – continues to work its bubbly magic in places like the eurozone and Japan.

Even a cursory glance at the following list of selected 10 year government bond yields should tell you that bonds are, for the most part, an unattractive place to be, at least in most developed countries. (A “basis point” is one 100th of a percentage point. So 23 basis points is 0.23%.) 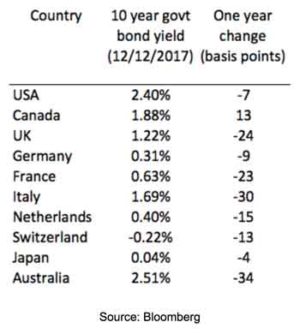 In all cases, bond yields fell, which means prices rose. Real yields, after inflation, are either negative or pathetically positive, by historical standards, in most countries.

Let’s switch now from government promises to something more solid and tangible: gold.

The yellow metal had a pretty strong year, at least measured in US dollars (remember: the US dollar weakened). The gold price went from US$1,152 an ounce to US$1,241 at the time of writing, up 7.7%.

My view is that gold is likely to beat official inflation by a couple of percentage points each year, on average and over the long run (see here for more). Which means averaging mid-single digits in the current environment.

But, of course, it won’t get there in a straight line. And nor did it get through 2017 with a smooth ride, as shown in this chart.

A(nother) bubble for the internet age

This year also saw a monumental bubble inflate in cryptocurrencies like bitcoin. Bitcoin is the Big Daddy (or Mummy) of this space, but there are now more than 1,300 crypto offspring vying for attention. This year saw an explosion of new “initial coin offerings”, or “ICOs”.

Some claim that bitcoin is a new form of “internet gold”, meaning a safe, long-term store of wealth. Others think it’s fool’s gold, and just a speculative fad.

Where bitcoin eventually ends up is anyone’s guess. In the spectrum of financial activity, it still sits on the ragged fringes of wild speculation. Daily price moves – up or down – are often as much as 20%.

What’s clear is that it’s currently in a bubble. This doesn’t mean it can’t go higher – either in the short term or the long term. It simply means that it has shot up extremely fast, leaving it prone to a gigantic fall at some point.

Given the nature of speculative bubbles, I wouldn’t be at all surprised if bitcoin doubles or triples again in the coming months. The bitcoin story is plastered over every media outlet every day. This draws in money from more and more punters, keen that they don’t miss out (even if they have no clue what they’re getting into).

However, given the nature of the bitcoin market (poor liquidity, no regulation or market “circuit breakers”, probable presence of leveraged speculators), it also wouldn’t surprise me in the slightest to see bitcoin crash 90% in just a few weeks.

Neither is a prediction. No one has yet invented the crypto crystal ball.

How did my recommended portfolio perform?

That’s my high level round up of what went on in markets during 2017. Now I’ll turn to how my recommended portfolio allocations have performed.

My recommendation takes a cautious position in a bubbly world. It includes profit opportunities from stocks and gold. But it also includes a lot of low return but ultra low risk cash “ammo”.

The cash will be used in future to scoop up bargains, when they once again become more widespread. Namely after a big fall in pricey stock markets such as the US.

The recommended allocation hasn’t changed much during the year. However, on 17th August I recommended switching 10% out of stocks and into long dated US treasury bonds.

That’s not because I think treasuries pay an adequate yield (currently 2.4% on the 10 year bond). It’s simply that they’re likely to do well if stocks crash, and money pours into this favourite “safe haven” during times of market stress. It’s a hedge.

Here’s a summary of how the recommendations evolved (full explanation here):

Using a few assumptions, I’ve worked out how this portfolio would have performed in 2017. The first is that the cash portion generated 1% annual interest (remember, it’s mainly there for future use, not for short term profit). Second I’ve assumed the stock portion is filled using the iShares MSCI ACWI ETF (NASDAQ:ACWI).

Finally, for the long dated US treasury bonds I’ve used the iShares Barclays 20+ Year Treasury Bond ETF (NASDAQ:TLT). That comes into play for a small allocation after 17th August, when the stock portion was reduced.

Including dividends and interest income, the recommended portfolio would have returned 11.5% so far this year. That’s a very strong result given the conservative asset allocation, and the resultant peace of mind. Here’s how that adds up: 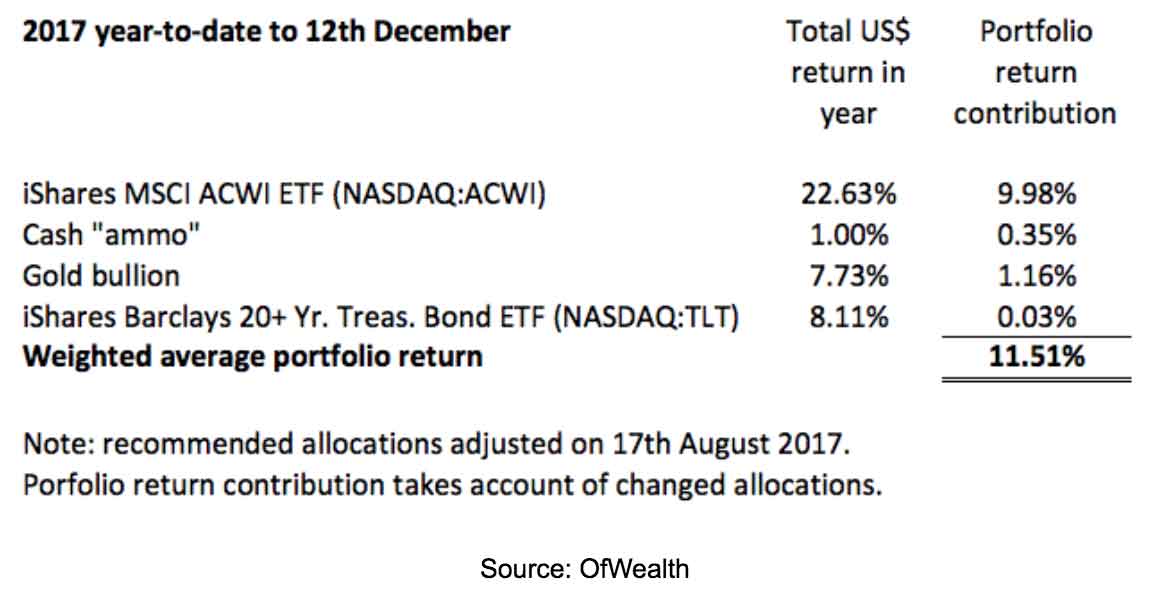 Long time readers will know that I like emerging market stocks in general (if not all at the same time). A stronger long-term growth trajectory and more favourable valuations currently makes them more attractive, in my view.

Because EEM performed better than ACWI, this boosted the overall performance of the recommended portfolio to 15.9%. Here’s how it was made up: 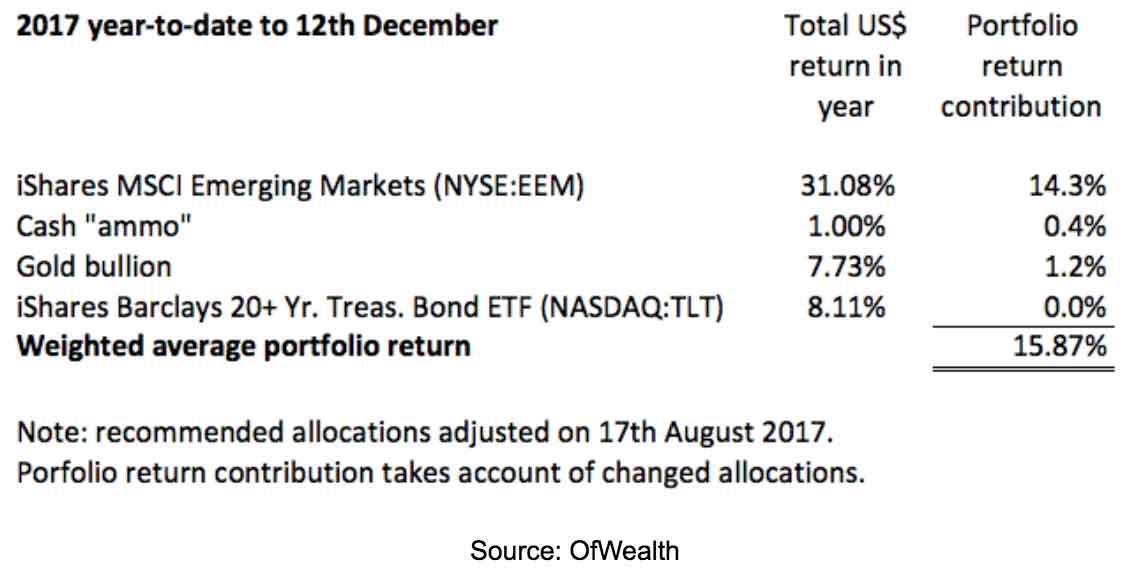 By the same token, if I substituted US stocks in place of the ACWI index the return would be cut by about 1%, to around 10.5%. I don’t know exactly which stocks you own, so I’m just giving some examples here.

Of course, if you’d had a bigger allocation to stocks than my recommendation you’d have likely done even better this year. But this is a long game we’re playing, and I’d always prefer to play it relatively safe than take massive risks.

This is especially important with the huge US stock market looking so expensive. If it does take a dive at some point it will almost certainly drag other stocks down with it for a time. (Although stocks bought well now, at sensible prices, will still do well in the medium to long term.)

The recommended portfolio is well hedged against most eventualities (see here for details), and one day stocks will drop sharply. Then the cash can be put to work once more stocks trade at attractive prices, and future profits will accelerate on the way back up.

That’s my high level summary of what’s gone on during 2017 in the markets. OfWealth has seen some changes as well during the year.

Readership of this free OfWealth Briefing is up 46% this year, and it’s great to know that we’re reaching more people around the world. During 2018 I hope to accelerate that rate of growth.

I’m currently working on the December report, which analyses a company with a large and fast-growing business across many Asian countries. I look forward to sharing that with members, and many more recommendations throughout 2018 and beyond (click here to find out more).

Speaking about 2018, next time I’ll have a look at some of the things to look out for next year. This year is nearly behind us. I expect 2018 to be no less interesting.