So far in 2014, investment assets have looked in the mirror and done the exact reverse of 2013. What was up is down, and what was down is up. This is a good reminder that markets are unpredictable, especially in the short term. It also underlines the importance of spreading your investments around between different asset classes.

On 31st March I explained the five things every investor must do. It’s a simple enough check list. But it’s based on two decades of experience from being immersed in the details of the financial and investment world.

Number one on my list was to diversify. This is nothing new, but it’s amazing how often people forget it. They get carried away by the latest craze and put too much money into one thing. Sometimes that can work out, but it’s highly risky. It only needs to fail badly just once and a huge chunk of personal wealth will be permanently wiped out. Getting it back again is incredibly hard.

So the idea is to spread the money around across at least four different asset classes, if not more. The main ones are cash/deposits, bonds, stocks and shares, real estate (land and properties), precious metals (mainly gold), commodities, and collectibles (examples are art, antiques, classic cars, fine wine, and rare stamps).

Then within each asset class you diversify further to reduce the risks even more. You place deposits with more than one bank, in case any individual bank goes bust. You have a range of stocks and shares of companies in based in different countries and operating in different business sectors.

You buy properties in different towns or regions, or even in different countries. Your gold can be coins and small bars that you keep close by. But for larger amounts you can store “allocated” bullion (held in your own name) in secure vaults in various offshore locations (here at OfWealth we recommend taking a look at bullionvault.com). And so on.

But – and this is an essential point that is often missed – there’s no point buying into all asset classes just to achieve diversification. You need to be selective. Each investment needs to stand on its own two feet. There need to be good reasons to hold it. If you actively diversify into unattractive assets then you will reduce your overall profits.

So for stocks and shares, you buy them when they’re cheap in the expectation that one day they’ll rise to a fair price, or beyond. You buy gold because of the collision between strong new demand in China and India and limited new supply, plus as insurance against financial catastrophe.

Even low return cash has its uses. You have cash on hand when there aren’t enough attractive investment opportunities, since you mustn’t over commit to any one thing. This cash gives you future firepower when more obvious bargains become available, such as after a stock market or real estate crash.

Just remember: you need to be selective in how you spread your money around. But even then, if you take a lot of care, not everything will work out. The world is a highly uncertain place at the best of times, especially in the field of investment. Even the very best professional investors have some losers.

The key to success is to have substantially more profits from winners than losses from losers. Sticking to low-priced, and usually unpopular, bargains and avoiding high-priced, and usually fashionable, “hot” areas is the most reliable way to achieve this. Be selective at all times…

But in the short term anything can happen, especially in liquid capital markets that trade assets such as bonds, stocks, precious metals and commodities. Don’t be disheartened when the price of something you own falls hard, especially if the underlying asset is still sound. In fact that is often the best time to buy more of it at an even better price. Just so long as you don’t overcommit to any one thing.

For example, a share price can fall even as company profits and assets continue to rise. Short term traders, with their wild mood swings and twitchy trading fingers, drive these irrational price swings. True investors look through the market noise to the real value that lies beneath.

And don’t worry if something you decided not to invest in goes up in price. That probably means it’s an even less attractive investment today than when you made your decision. Or you made a mistake, in which case just forget it and move on. It’s better to miss out on profits for good reasons than to take losses by ignoring reason.

Prices can be volatile, swinging wildly for no fundamental reasons. Those that have surged higher often come down the most in the immediate future. And prices that have plummeted the hardest are prone to bounce back up again.

The table below, from fund manager Pension Partners, shows exactly what I mean. It lists a range of asset classes, most of them represented by exchange traded funds, or ETFs (shown with the three letter ticker codes, which allow investors and brokers to identify them). The only asset not represented by an ETF is Bitcoin, the experimental, electronic “cryptocurrency” that has been worrying government regulators from the USA to Japan as it seeks to bypass the fiat money system.

The table compares price performances in 2013 with performance so far in 2014, up to 11th April. You can see straight away that things that went up last year are down so far this year, and vice versa. The one exception is “high yield” bonds (better referred to as junk bonds, or high risk bonds, due to their higher risk of debt default). 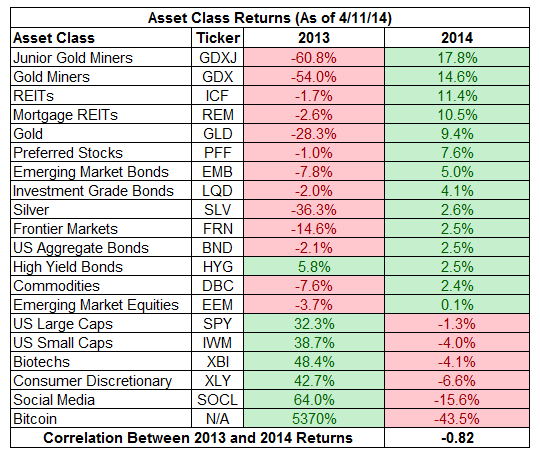 The fastest rising stock market sector – social media companies such as Facebook – is the biggest faller in recent months. And it’s about time. Social media stocks have been trading at nosebleed levels. Facebook Inc. still has a P/E of 97. As if that wasn’t bad enough, LinkedIn Corp. has a staggering P/E of 767!

You really would need to see stunning profit growth to justify paying 100 times current earnings to own a piece of a company (which is, after all, what a share is). Let alone more than 700 times! Best avoided, unless you like pure gambling…

This looks like a re-run of the dot com bubble in the late 1990s which burst in 2000. The US based NASDAQ index, which is dominated by technology shares, fell 77% between March 2000 and September 2002 as the bubble burst. Social media stocks could easily do the same from today’s levels. People never seem to learn…

The successful investor finds a range of assets that he wants to own. He buys into the cheap ones. But if prices of some are currently too high he waits for a better time. Profits are taken when the prices of assets owned surge upwards, which can sometimes take years to happen. Cash is then reinvested in new, well-priced opportunities, or put aside if none are currently available.

No one can predict short term price swings. But, by investing for the long term in a range of attractively priced assets, you will do well. Market price swings just give you the chance to buy things when they’re cheap and sell them when they’re not.

In other words price volatility is something to look forward to, not something to fear. What goes up almost certainly must come down at some point, and vice versa. Use this knowledge to your advantage.