We’re about to creep carefully into 2017. With US stocks in a bubble, and bonds still diving, investors will need to have their wits about them. But, as always, there are still plenty of opportunities for profit. Here’s what you should look out for in 2017.

First of all, in case you missed it, see here for my take on what happened in 2016, and what investors can learn from it. But now let’s examine what we should do in 2017.

Donald Trump’s US presidential win throws a lot of things up in the air. He’s signalled a willingness to have dialogue with Russia, which can only be a good thing. Given that both countries are armed to the teeth with nuclear weapons, who wouldn’t want them at least talking to each other?

On the other hand Trump doesn’t seem to mind antagonising China. That could lead to all sorts of complications with global trade, not to mention geopolitics. Chinese stocks are mostly cheap, up to now largely due to concerns about corporate debt levels. This renewed uncertainty could weigh on them further.

Closer to home, Trump’s plans to cut corporate taxes should be good for companies’ net profits. But there are headwinds too (see here).

Apart from that, having a plan is one thing. Putting it into action is another. When the tax cuts actually happen, and how much they’re watered down first, are as yet unknown.

In the meantime US stocks are priced for perfection. The S&P 500 index has moved from the high valuation plateau where it’s been camped out for the past several years. It’s now begun to scale a sheer and slippery cliff face as it nears the summit of historical valuation multiples.

You see, on most measures, US stocks have only climbed higher twice in their life. Just before the Wall Street Crash of 1929 and during the 1997 to 2001 technology bubble – which was followed by a crash. (See here for a full explanation.)

Mountain climbing isn’t for the faint hearted. It’s full of risk. And so is buying overpriced US stocks. I recommend you stay away.

Of course this doesn’t mean there aren’t many great companies amongst the thousands of stocks listed in the US markets. But, even when you find them, if the price isn’t right then you’re unlikely to make a decent profit from the stock. Or you’ll have to wait many, many years before you get a decent outcome.

With US stocks generally trading at such high levels it’s a tough hunting ground for bargains. It’s easier to look elsewhere. One obvious place is in the emerging markets, although not in all of them.

In general, emerging markets are on a higher economic growth trajectory than developed ones. Real (inflation adjusted) GDP is expected to rise 4-5% a year instead of 0-2%. Over time this feeds into company profits, which translate into capital gains and growing dividends.

At the same time the MSCI Emerging Markets index, which includes stocks from 23 countries, has a P/E of 14.6. That’s compared with 26 for the US S&P 500 index.

So an obvious thing to do is to hunt for bargains in the cheaper stock markets of those higher growth economies, or in companies based anywhere that sell a lot to them.

But you need to be selective. That index includes some real dogs.

One such is Greece, with its insane debt load and depression economy. Even though Greek stocks had already fallen by 95%, I warned investors to stay away in April 2015 – see here. Since then they are down a further 29% from the level at that time.

And it would take a brave person to invest in Turkey at the moment, another index constituent. It has highish inflation (7%), an autocratic government that survived a coup attempt in 2016, and proximity to the wars in Syria and Iraq. But, overall, emerging markets offer some great opportunities.

Consider this chart, which compares MSCI stock indices for the USA, Europe and Emerging Markets, going back to 31st December 1987 (the earliest date for all series). All are in US dollars and start at 100, for easy comparison, and include dividends as well as capital gains. 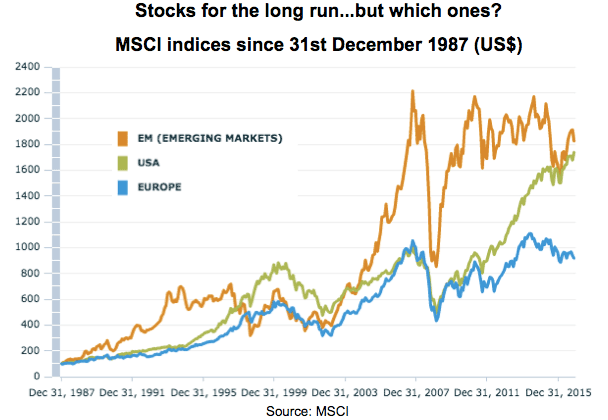 There are a number of things to note here:

Given the relative performances and differences in current valuation multiples, it’s clear that emerging market investors have benefitted from capital gains as earnings have grown faster than other regions. This is sustainable and likely to continue in future – with the usual business cycles along the way.

On the other hand, US investors have had to rely heavily on P/E increases to get their profits. This is not sustainable and can’t continue forever. (See here for an explanation of the very poor job that US companies have done for investors in recent years, in terms of growing underlying profits.)

When it comes to investors in Europe, their profits have been poor. But, such as there have been gains, a lot have come from higher and higher valuation multiples. Again this is not sustainable.

It’s clear that investors with an eye for profit should be concentrating their attentions on emerging markets, especially where they can find bargains (such as in Russia). The combination of higher growth, decent dividends and attractive entry prices are highly likely to deliver agreeable results. In the meantime the risks for investors are currently high in the US and Europe.

But there’s a caveat – at least in the short term. The US stock market is nearly half of total global stock market capitalisation (value at current market prices). If the US crashes, everything else will get sold off in the panic as investors pull out funds.

Just look at how all the lines in the chart fell together between 2000 and 2002 (post-tech bubble crash, centred in the US) and between 2007 and 2009 (global financial crisis that started in the US).

(Note: the big fall in emerging market stocks in the late ‘90s was due to two specific things – the Asian crisis in 1997 and the Russian debt default in 1998. In those days these economies and stock markets were much, much smaller than today. US and European stocks were largely unaffected as a result.)

In other words…and even if you buy well today…if pricey US stocks crash the chances are they’ll drag your investments down with them. But the effect will only be temporary, and it will be a great time to deploy cash in a wider array of excellent bargains. Investors that bought the emerging market index in early 2009 quickly doubled their money, and more (see chart).

Here’s a really specific example. I remember discovering a Russian chicken processor – Gruppa Cherkizovo – whose stock crashed around 95% during 2007 and 2008. According to the markets, just because many Americans couldn’t pay their mortgages Russians were going to suddenly stop eating chicken.

Obviously this was absurd, and a great buying opportunity. In fact, by late 2010 the price had recovered all the losses and more, and was up 25 times from its low (a gain of 2,400% in less than two years).

There were many opportunities like that at the time. That’s why market crashes should be seen as fantastic opportunities, and not something to fear. Provided, of course, that you’ve got some cash put aside ahead of them. (For more about wild price swings, why you shouldn’t fear them, and how to profit from them see here and here.)

With this all in mind, for now I’m sticking with my recommendation of how to split your investments as we head into 2017. I first wrote about it on 29th September, and reiterated it on 3rd November.

A quick word on gold. I have no idea whether it will go up or down during 2017. But I believe there are good reasons to own it for the long run (see here for the latest take).  If the price takes off like a rocket, trim your allocation to prevent too much exposure. If it falls hard, top it up.

As for bonds, they’re not yet priced for a decent return above inflation. Yields are still rising, meaning bond prices are falling.

But if they keep heading in this direction for much longer – say 10 year US treasury yields above 3.5%, from 2.6% today – I may recommend a small bond allocation as a useful diversifier. If stocks crash, then treasuries will gain sharply – offsetting the shock.

In the end it’s the people that do nothing (sit on low return cash forever, while inflation grinds away), or who chase the latest hot trends and bubbles (buy expensive things priced for perfection and primed for disappointment) that have the most to worry about.

There are always attractive profit opportunities somewhere. What’s more, patient investors that spread their money around wisely will always survive the worst that the markets can throw at them in the short term. More importantly, they’ll profit nicely in the medium to long run.

Throughout 2017, OfWealth will continue to bring you original analysis and ideas for where to invest and what to avoid. But for now, all that’s left to say today is Happy New Year.