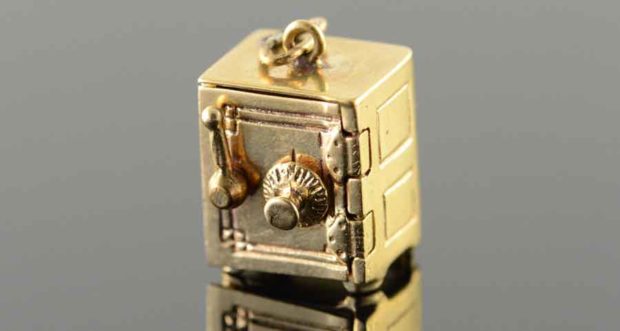 Last week I took a close look at the defensive qualities of my recommended portfolio allocation in “Defend your portfolio from war”. A reader wrote in asking for some clarification on how to go about filling the recommended 15% allocation to physical gold.

Gold investors enjoyed a huge bull market between the early 2000s and August 2011, when the price peaked at US$1,909 an ounce. Then there was a big bear market into the end of 2015, but now things appear to have stabilised and turned around.

A reader wrote me the following note:

The Gnomes [Note: this is a term commonly used to describe Swiss bankers] have been talking for quite some time to incorporate into conservative portfolios a minimum of 5% to 10% gold. I see that in your chart you are increasing it to 15% which is quite understandable.

When you speak of “physical gold”, do you actually mean bars or coins in the bank’s safe…at arms reach…or do you accept the ZKB certificates as a reasonable alternative? The point of holding 35% in cash is well made.

Thank you for the question. I’ve also heard that Swiss private bankers started recommending a gold allocation a few years ago. Which is interesting, since they wouldn’t have touched it with a barge pole a decade ago. (Back then I still worked for UBS Group, the largest Swiss bank, and was a regular visitor to Zurich in Switzerland.)

The short answer to the main question is that I like both coins and bars. The longer answer follows.

(Note: All OfWealth readers have an open invitation to send absolutely any comments on articles, or questions about investment – however basic or advanced – to robmarstrand@ofwealth.com. I love to hear your insights and opinions, but also what you’d like to hear more about.)

First, let me explain the letters “ZKB”. They refer to Zuercher Kantonalbank, which is a bank that’s wholly owned by the Swiss canton of Zurich. A “canton” is a district, basically similar to a county.

As such, ZKB is a conservatively run bank, publically owned by the government of a rich district, nestled within a stable, solvent and prosperous country. It’s about as safe as banks get.

Second, a small clarification. I first set out my recommended portfolio allocations on 29th September 2016, and at that time used ranges. Gold was set at 10% to 20%. The mid-point was 15%, and that’s what I put in my updated allocations from 17th August this year. So, nothing has changed from earlier on. I’ve just simplified it to one number.

In that August update, I briefly explained why gold is included (click here for more). At that time I wrote the following:

“I expect gold to beat inflation over the long run as relatively fast wealth growth in the world’s vast emerging markets continues. That means strong demand, for what I call “the ultimate consumer good”, running slap bang into relatively limited supply and driving up the price.

Physical gold is also insurance against another huge financial crisis, an inflation hedge, and a general diversifier from stocks. For these reasons it remains a core part of the portfolio, even if my perfect world portfolio would contain less of it.”

You’ll find plenty of articles about gold on the OfWealth website (www.ofwealth.com). Take a look under the category “Gold and Precious Metals”, which you’ll find at this link. In particular, let me highlight the following:

There are many different ways to own gold, and each has its pros and cons. My motto is “let’s get physical”, at least that’s the preferred route. By that, I mean it’s better to own the real thing – gold coins or bars – than to own merely exposure to movements in the gold price via some kind of financial product.

In order of priority, these are how I recommend any investor builds a gold position:

When John mentioned “ZKB certificates”, he could have been referring to the ZKB Gold ETF (Zurich:ZGLD / PINK:ZKBGF). That’s a gold-backed ETF managed by that bank, and as such one of the safest.

Equally, he may have been referring to some kind of unallocated gold account at the bank. In general, I concluded many years ago that these are an inferior way to get exposure to the gold price. As such they should be avoided.

The first time I ever invested in gold I was living out in Hong Kong, so it would have been around 2003 (when gold was still cheap!). At that time, being a gold novice, I had an unallocated gold account at HSBC bank.

“Unallocated” gold means metal that isn’t your personal, directly owned property. As much as possible, you always want to have physical gold in your direct possession or as your direct property, even if stored on your behalf (options 1 and 2 above).

An unallocated gold account is really a bank deposit that’s denominated in quantities of gold such as ounces, or grammes, or – in the case of my Hong Kong account – taels, a common measure used in that part of Asia. That’s instead of a bank deposit accounted for in fiat currencies like dollars, euros, yen, reais or whatever. Regular readers will know that all bank “deposits” are really just loans to the bank.

As such, there is “counterparty risk”. The bank could go bust and you could lose your money, especially as gold accounts may not be insured. This is not a feature of “allocated” gold, which is your direct property.

Unallocated gold accounts may be gold-backed, in the sense that the bank has gold in its vaults equivalent to what the customers think they own. And customers may be able to take repayment in the form of gold. But until they make that claim, they don’t actually own any gold. They just have a contractual claim against the bank. And, just like any contract, it may not be honoured.

Where to go for bullion

When I originally worked all this out I got rid of my HSBC gold account and moved into coins and allocated bullion. You should buy coins from a reputable local dealer wherever you live. Bullion, fortunately, can be bought easily and cheaply online and stored in guarded and insured secure vaults around the world.

The service I chose was BullionVault. It was a pioneer in offering allocated bullion investments directly to ordinary people at a low cost. I still reckon it’s the best choice, with the main competitors being GoldMoney and Hard Assets Alliance. The reasons I like BullionVault are:

Each of these services has different ways of charging for their services, which makes them hard to compare. But, according to my analysis, BullionVault works out cheaper than the competition in almost all circumstances, often by a huge amount. If you’re interested in finding out more, I encourage you to click on the link above.

I hope that’s answered John’s question. But if you have other questions about gold or anything else then just let me know.

[For more details on all the ins and outs of gold investing – including each of the three options listed above, plus some other ways to invest in gold and some common gold investments to avoid – see my special report “The Best Ways to Invest in Gold: The Ultimate Consumer Good”. OfWealth Briefing subscribers received this as a free gift when they signed up. You’ll also find it here.]